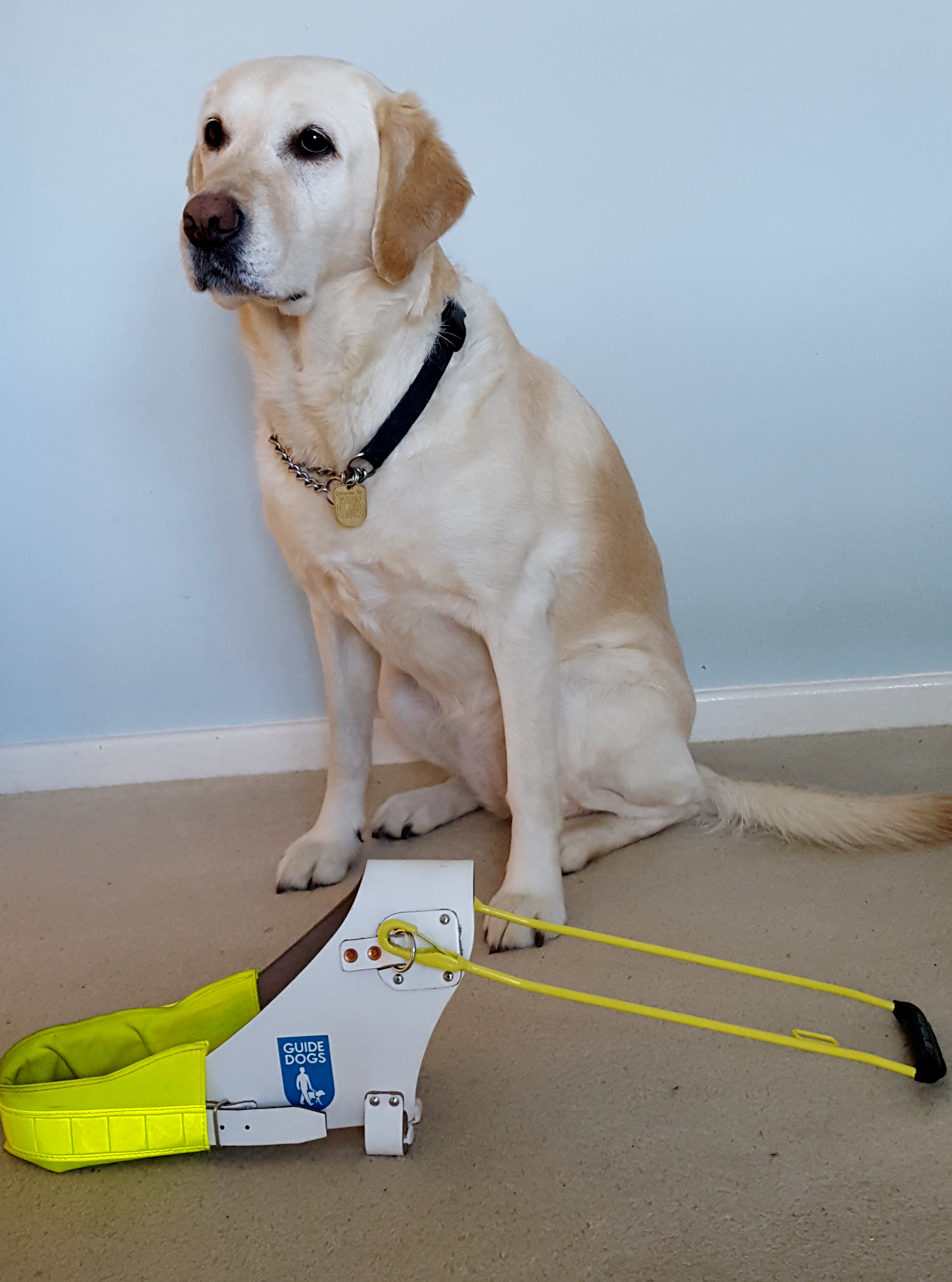 Zoe, the Guide Dog and real star of our review

In October 2016 SPACE for Gosforth arranged a review of recent changes to the Salters Road / Gosforth High Street junction with the Royal National Institute of Blind People (RNIB), the Guide Dogs for the Blind Association , engineers from Newcastle City Council and Zoe the Guide Dog.

As SPACE has previously noted, making roads and crossings accessible for people with disabilities is a matter of law and it is unlawful for a disabled person to be put at a substantial disadvantage in comparison to a person who is not disabled.

The needs of those with a visual impairment should be at the forefront of debate about traffic in Gosforth,  not least because three of Gosforth’s schools house Newcastle upon Tyne’s Visual Impairment Additionally Resourced Centres (VI ARCs).  As one of our members has previously noted:

“If we can design our streets to meet the needs of the visually impaired it’ll be a much safer and more pleasant place for everyone. This should be the absolute baseline for any changes undertaken.” 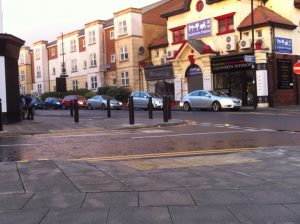 We found that the junction has some standard features that assist access for those with visual impairments and other disabilities:

Designing fully accessible streets, however, goes beyond simply adding in these physical features.  It involves planners and engineers putting themselves in the position of others with a wide range of physical and additional needs and trying to anticipate what will enable them to cross a busy junction safely – and then reviewing how those features work once they have been put in place.  It should be seen as an ongoing progress as city streets change over time, rather than a process with a fixed end solution.

The group found that despite the changes, the junction still presents a challenge for visually impaired people to navigate, for several reasons including:

“The junction has been designed to the latest set of design standards, but some of the issues have arisen because the design standards do not fully address the needs of those with visual impairments.  The group spent some time trying to come up with ideas to improve the situation, and thinking about other areas in the UK that might have had a similar situation, and where Gosforth could learn from their experience.”

This engagement is very welcome, as this junction lies on a walking route between Gosforth High Street and two of the VI ARC schools (Gosforth Academy on the Great North Road, and Gosforth Junior Academy on Jubilee Road), and our streets need to be designed to enable pupils attending the VI ARCs to be able to walk around the community with their families and friends.

Our member reported that following the review meeting Newcastle City Council has implemented the following changes: 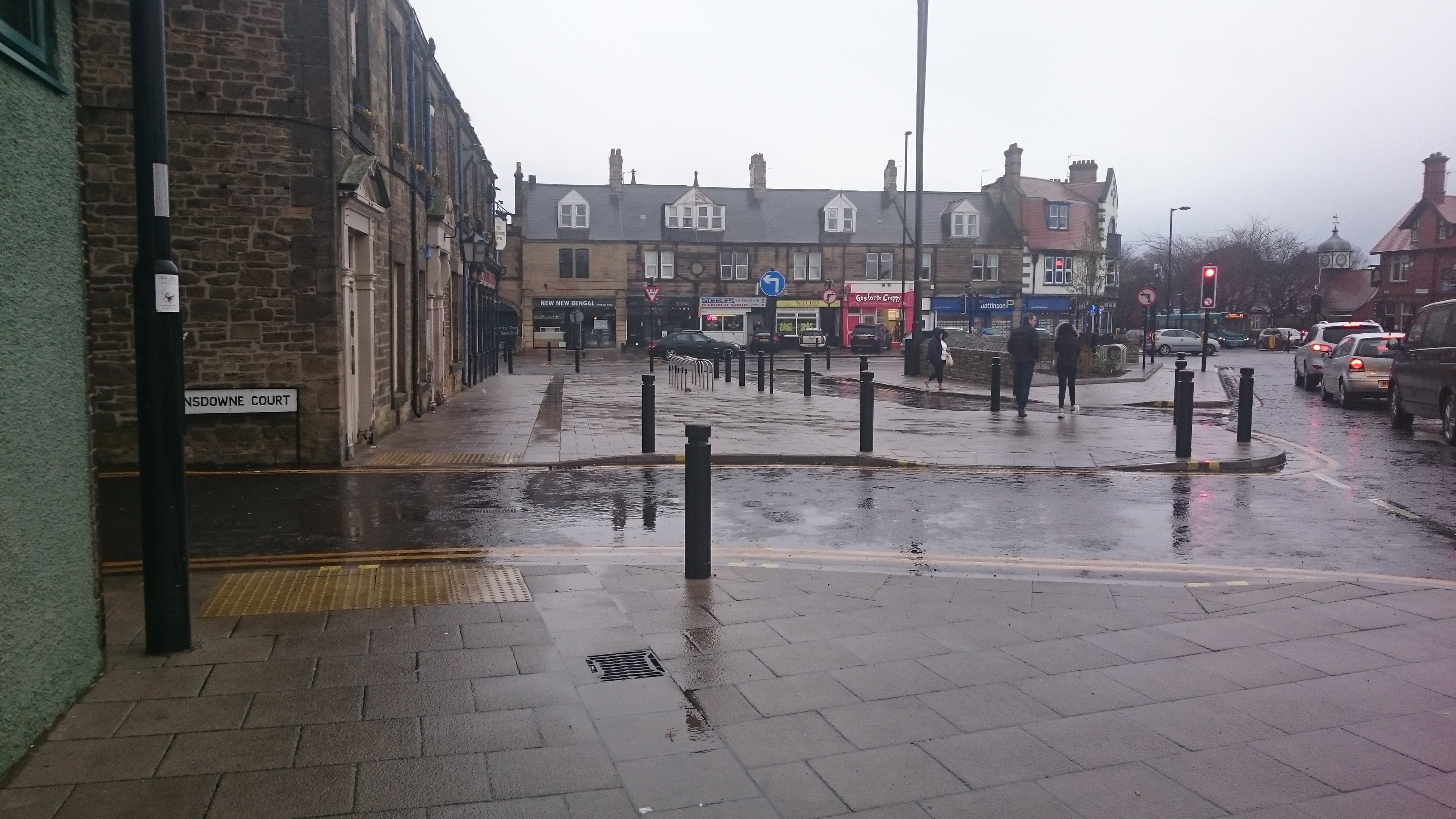 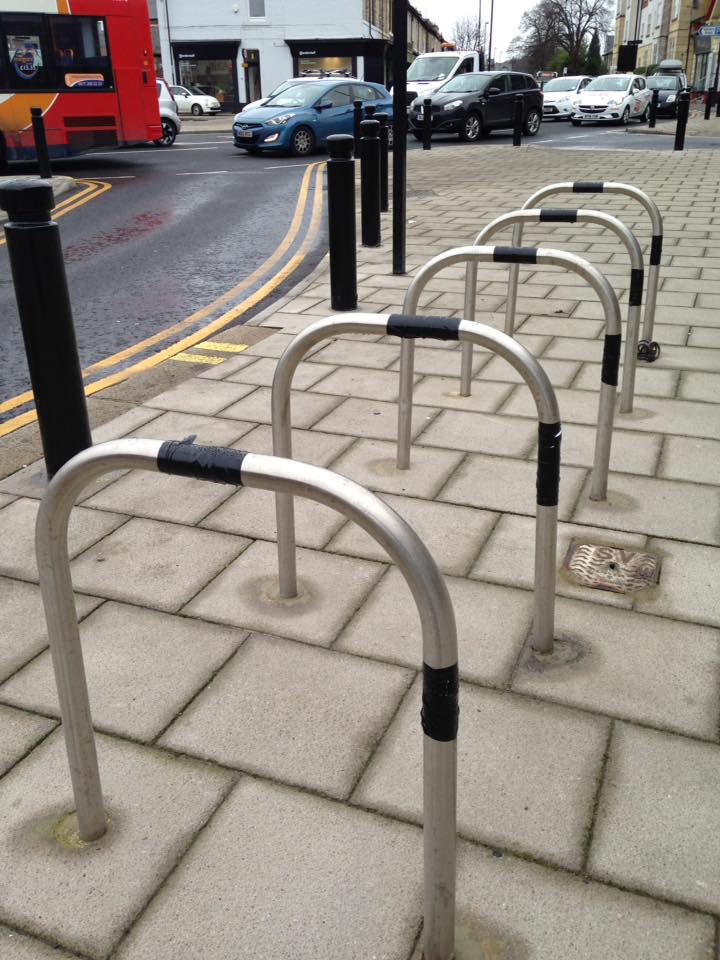 To meet best practice it would be better to surround the racks with tactile paving, such as cobble stones, so that there is a clear definition that there is an obstruction on the footway.

However, the racks are situated away from the wall of Gosforth Hotel so they do not impede on the “inner line” that people with visual impairments follow when walking along a street.

One key issue still remains.  When crossing at the top of Church Road towards the The Queen Victoria the position of the control box is set back from the junction, which means that it is not in the natural position for a visually impaired person to find (especially if walking on the left of the tactile paving).  In addition, the curve of the pavement gives the impression underfoot that the pedestrian will walk in that direction, effectively into the middle of the junction.  This was not a problem for Zoe, as she knew where to lead her owner to cross safely, but for those people without a Guide Dog it is dangerous. 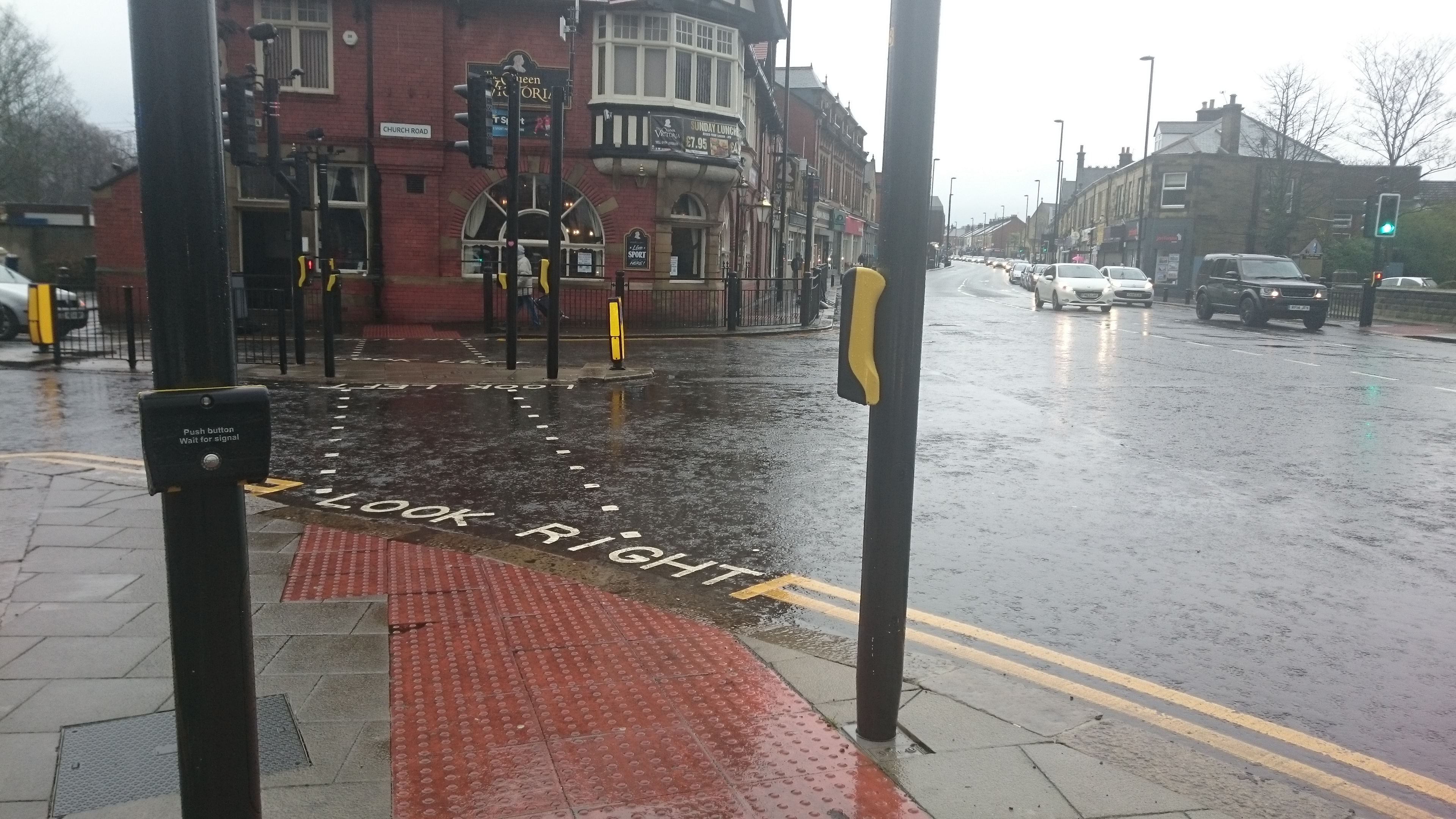 The sweep of the junction also means that drivers increase their speed and come very close to the pavement.  For people with sight, we would very likely step back but for someone with a visual impairment a vehicle crossing your path at speed is a terrifying experience.  This crossing point would be much safer if the turn was much tighter to slow down drivers turning left. 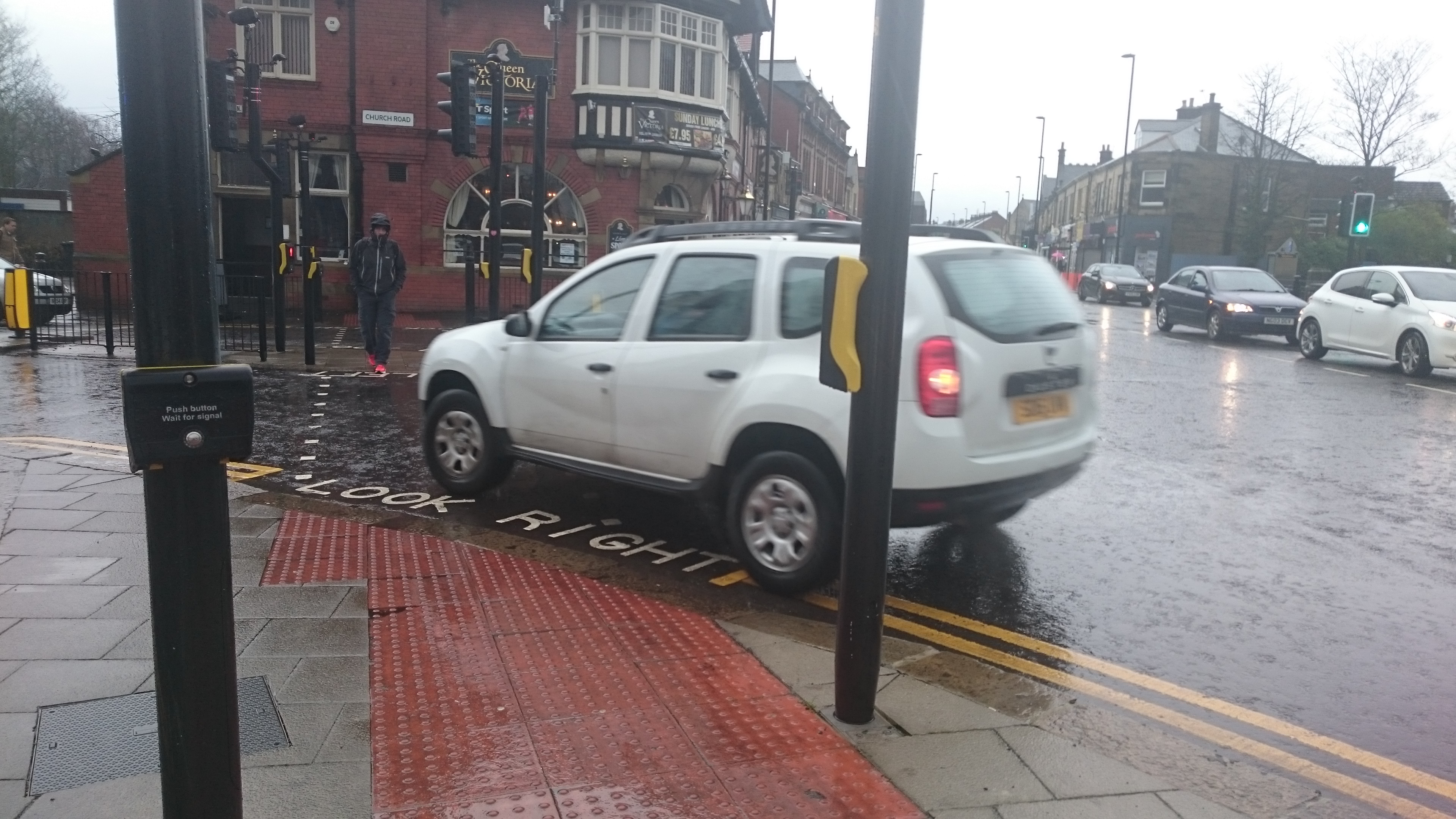 Zoe, the Guide Dog and real star of our review

“Having Zoe the Guide Dog as part of the group for the review meeting was important. I own a dog, and well, he’s just a bit thick in comparison to Zoe’s expertise at navigating herself and her owner safely across busy roads and through crowds of people. It was an education studying her behaviour.

For the first time I realised that we’re not just fixing the street for the owners, we need to fix it so it works for the dog as well. The very worst situation is to have a confused Guide Dog! They are truly remarkable animals and a lifeline to independence.”

Linda Oliver, Engagement Officer for Guide Dogs added: “Guide Dogs were very pleased to be involved in this important piece of work. Some street designs can cause potentially dangerous problems for many people who are blind or partially sighted. It was a great opportunity to speak to Council engineers and explain some of these issues and to be supported by SPACE for Gosforth.”

Please do support the fantastic work that Guide Dogs do and we would urge all readers to take action and support the Guide Dogs campaign to introduce legislation across England and Wales to make it illegal for people to park on pavements.