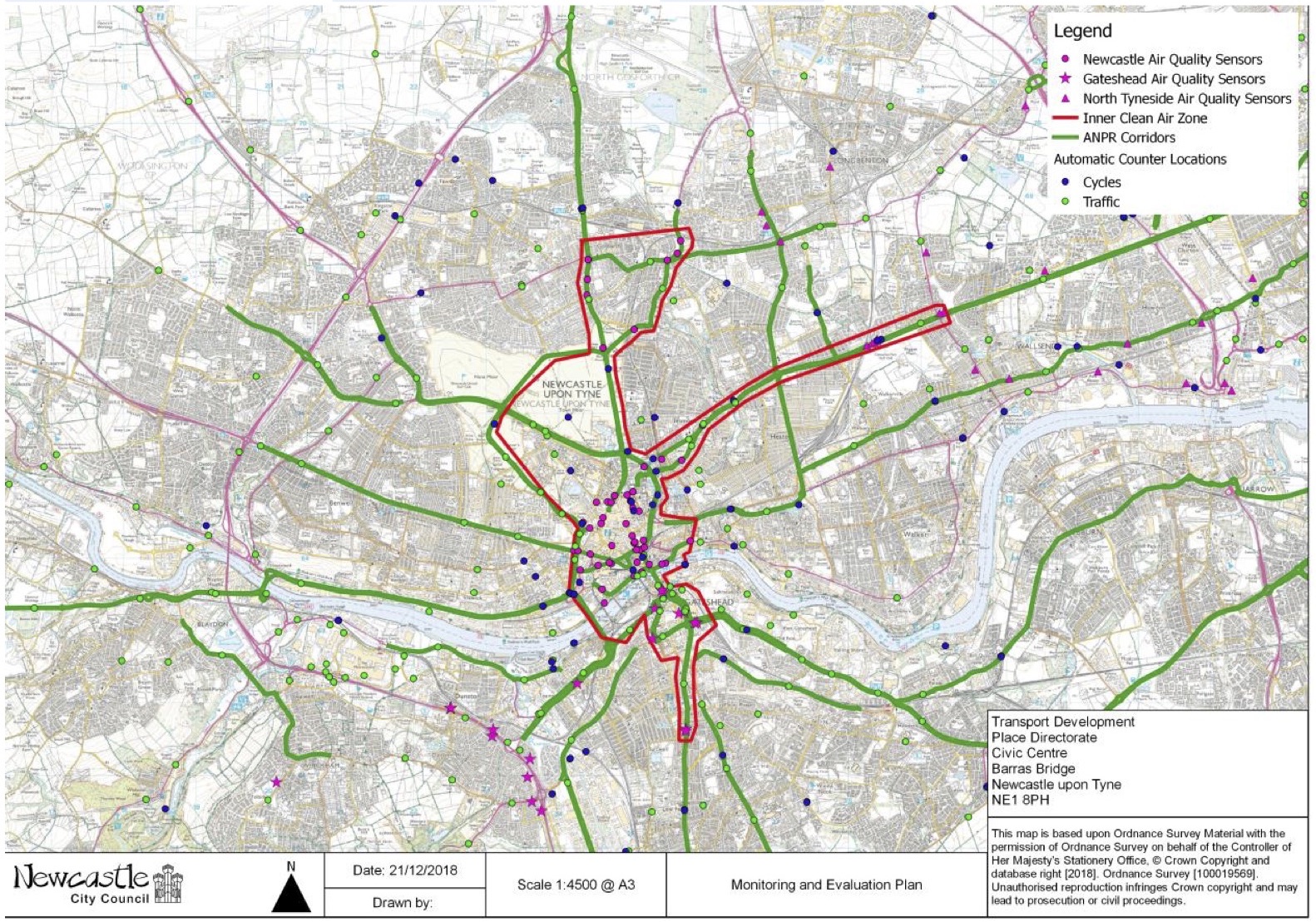 Newcastle City Council has published its feasibility study for a Charging Clean Air Zone. This shows that, other than in a few locations, air quality can be improved to be within legal limits by 2021, sixteen years after they should first have been met. Although this is welcome progress, it does mean Newcastle has missed the deadline set by Government to produce a final plan by the end of December 2018.

What that final plan will be we don’t yet know, but we do know that by law it must include, or be as least as effective as, the Charging Clean Air Zones modelled in the Feasibility Study. If it does not it will not meet the legal requirement to meet air quality limits within the shortest possible timescales. It must also, as determined by the UK Supreme Court, prioritise areas where human exposure to poor air quality is greatest, and ensure that compliance with legal limits is likely, rather than just being possible.

Newcastle, like other UK cities with air pollution issues, has had air quality plans that relied on measures like redesigning junctions to increase vehicle capacity and publicity campaigns to encourage people to walk, cycle or use public transport. As data for Gosforth High Street demonstrates, increasing vehicle capacity has meant increased traffic and more pollution, and encouragement is also unlikely to be effective while safety concerns are unaddressed and the city offers financial benefits in the form of cheap or free parking.

The graph below projects the trend from improvements over the last ten years to show that if current trends continue, the city is unlikely to meet NO2 air quality limits until at least 2028.

In this graph, the red line shows the highest reading by year from 2008 to 2017. In 2017 this was for Gosforth High Street. The black line is a linear trend line, not reaching 40μg/m3 (the legal limit) until the start of 2028. This itself is not guaranteed though and it could take even longer if no further action is taken.

The more important line is the blue dashed line, which shows the profile if  the Council’s plan is  to achieve compliance by 2021. The green line shows the current legal limit that should have been met by 2005. Actual pollution measurements should have been beneath this line during the whole period shown.

If the Council is going to clean up the city’s air pollution problem then it needs to get started ASAP.

Newcastle and twenty eight other local authorities have been directed by the Government to produce a final plan, and Newcastle City Council isn’t the only one of those councils to have missed the deadline.

Dr Thérèse Coffey MP Parliamentary Under Secretary of State for the Environment has recently written to Bristol City Council stating that Bristol had “unlawfully failed to comply with the [Ministerial] Direction” to provide a final plan by 31 December 2018 and that “any delay or non-compliance with [new] deadlines will result in my being forced to consider legal action against Bristol City Council which may include issuing proceedings without further notice.” The new deadlines for Bristol are 21 February for a final plan with consultation to start by 29 March.

BBC News has also now reported that the UK is home to more children suffering from respiratory conditions than anywhere else in Europe. This video is Lily’s story. Lily and her family live in Bristol where the Council has yet to produce its plan.

There are a number of relatively straightforward actions that the Council can start now, in advance of setting up a Clean Air Zone, that will help it clean up air pollution in Gosforth and Newcastle more quickly.

The following maps have been generated from TimeTravel Maps, a website that shows how far it is possible to travel by different modes of transport in a given amount of time.

The first of these maps shows where you could travel from to arrive at Monument within 15 minutes. The red area is public transport – showing a spur going north up the Great North Road. Blue/green is the area for cycling and orange for driving. It is clear that over short distances there isn’t much time advantage to using a car, and any advantage there is may well be wiped out by time taken to park and walk to your final destination.

This only takes into account time however, so in itself is unlikely to persuade anyone to change how they travel. For that, other issues such as the cost of public transport vs driving, and the lack of safe, direct cycle routes will also need to be addressed. 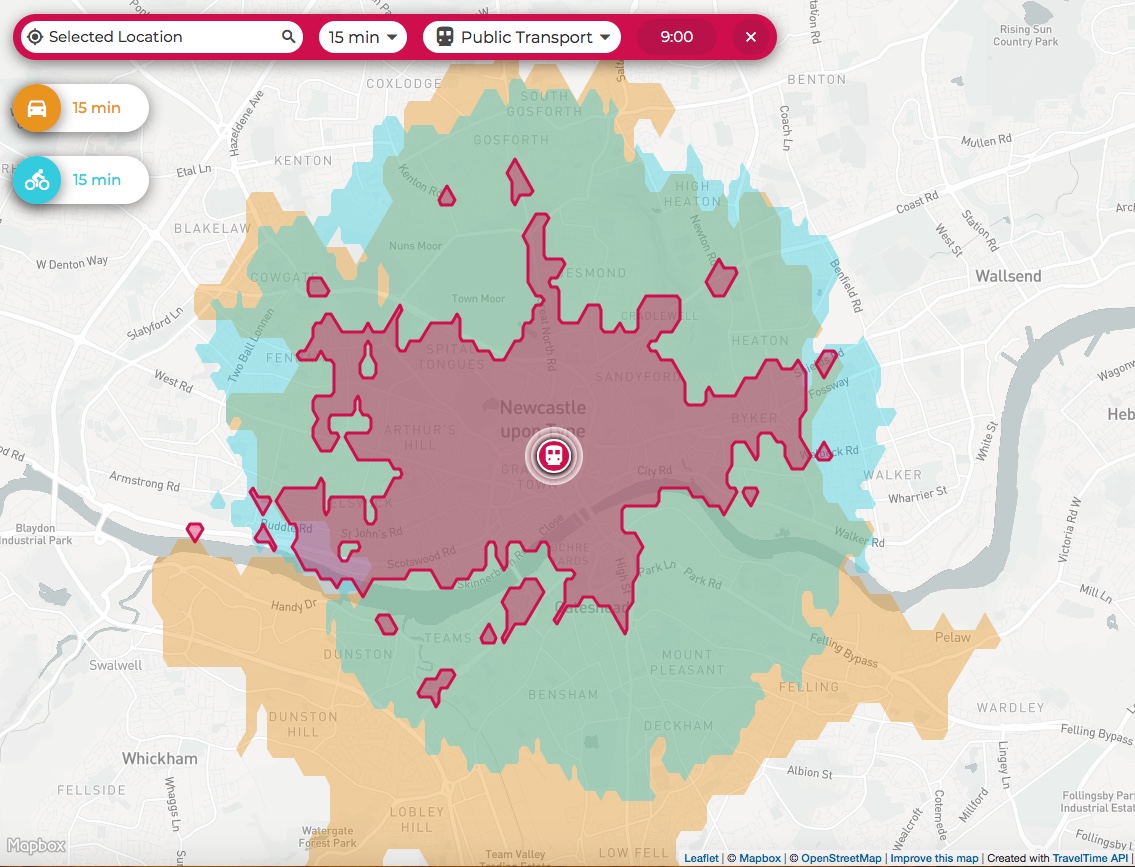 The second map shows where you can travel from to arrive at Monument within 30 minutes. Practically all journeys travelling from within Newcastle to the city centre can be made in 30 minutes by all three modes of transport. 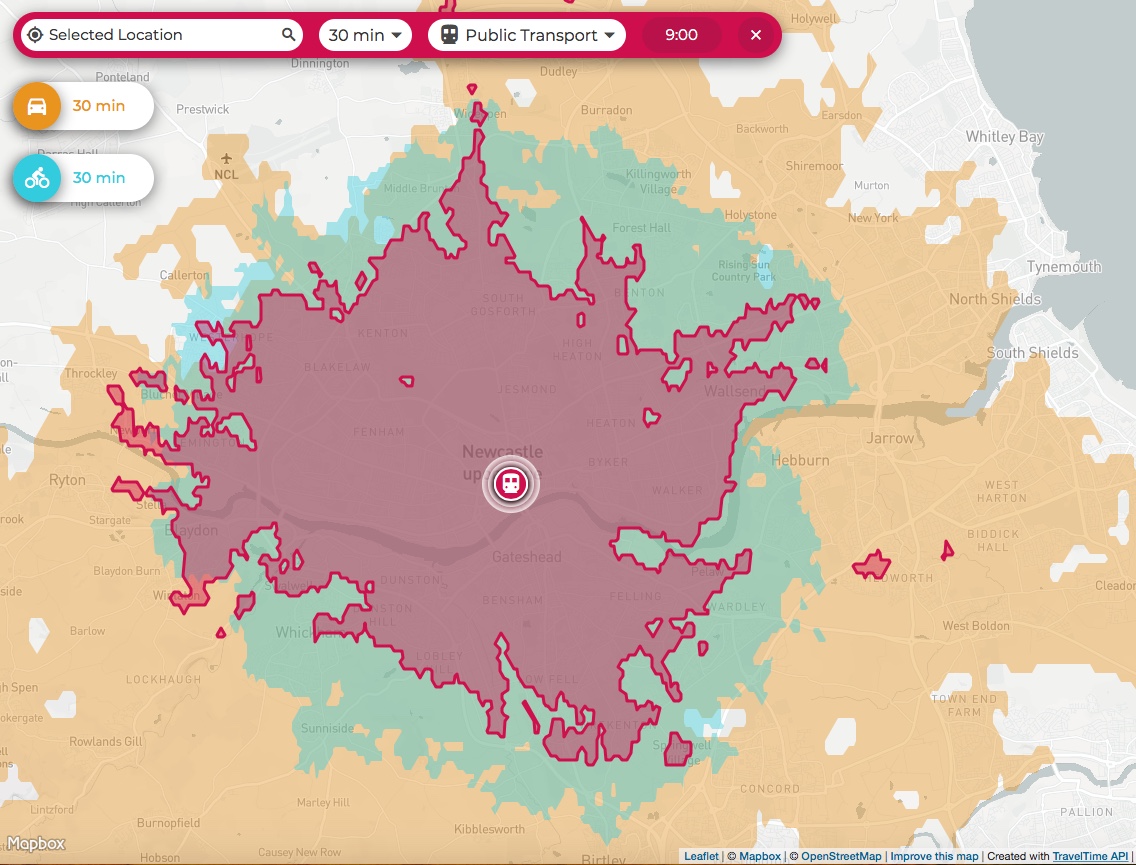 Results from the Feasibility Study

Newcastle City Council, along with Gateshead and North Tyneside Councils, modelled three variations of Charging Clean Air Zones, as well as a do nothing option. All three variations (B, C and D) included a charge for buses, coaches, taxis and HGVs. Variant C also included a charge for vans/LGVs, and Variant D included vans/LGVs and private cars. The charge would only apply to vehicles that do not meet the required emissions standard. For cars this would be EURO6 for diesel and EURO4 for petrol vehicles.

The zone used for the CAZ is the map at the top of this blog covering Newcastle and Gateshead city centres, the coast road, Spital Tongues and Gosforth between the High Street and Haddricks Mill Road.

The modelling results show that the most effective CAZ was D, including charges for private vehicles. Even in that scenario the Central Motorway East and roads approaching the Central Station would still remain above the limit in 2021. Further details can be found in the Strategic Outline Business Case section 1.8.

11 thoughts on “Your Right to Clean Air”