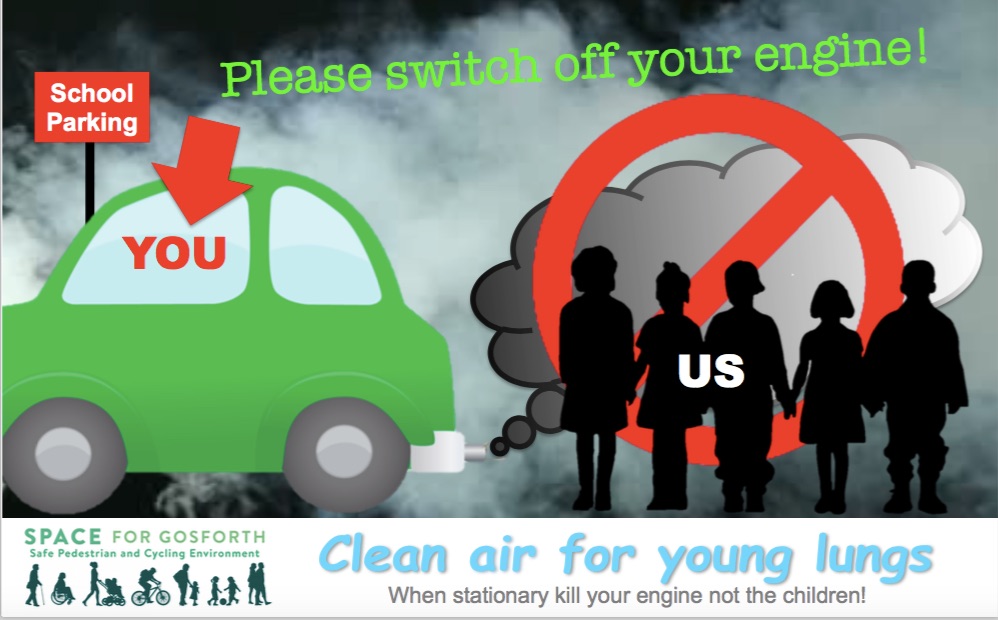 Newcastle City Council have released the Air Quality Feasibility Study that will be used for its forthcoming consultation. Whatever the final plan that is chosen, it must by law meet air quality limits within the shortest possible timescale. The question for the consultation therefore is how should that be achieved.

In addition to the main objective of meeting air quality limits in the shortest possible timescale, the Council has chosen three secondary objectives:

Substantially the whole consultation is about how to improve public health. Air pollution is a major public health issue linked to multiple conditions including asthma, lung disease, heart disease, cancer, psychotic experiences such as  hearing voices or intense paranoia, children’s cognitive development, dementia, low fertility and sperm damage. We are interpreting the Council’s additional objective (a) as covering all of these and also including wider health benefits such as the benefit of having more exercise from walking or cycling more.

In 2016, Newcastle’s Director of Public Health Professor Eugene Milne recorded this message about air pollution and the public health impact of how we travel in Newcastle.

Both options also include upgrading local buses, including all those running on Gosforth High Street, to the latest EURO emissions standard, and the introduction of integrated public transport ticketing.

As context for the proposed charges, the Independent reported in 2015 that between 1980 and 2014 the cost of motoring fell by 14 per cent in real terms but, in the same period, bus fares increased by 58 per cent and rail fares by 63%, substantially due to government policy.

In the Council’s modelling the Charging Clean Air Zone – Class D (CAZ-D) came out as the most effective at meeting air quality limits in the shortest possible timescales. Class D means that private cars that are non-compliant will be charged in addition to buses, taxis, HGVs and vans. In Newcastle, about 17% of petrol cars and 77% of diesel cars are estimated to be non-compliant and would therefore have to pay the charge if driving through the CAZ.

The Council’s analysis is also that people in low-income areas are more likely to have non-compliant cars compared to areas like Gosforth, which in the map below has 20-40% non compliance compared to 80-100% in some parts of the West End. That doesn’t mean there are more non-compliant vehicles in the West End as higher-income areas tend also to have far more vehicles. In the 2011 census, Parklands ward had the most vehicles with 83% of households owning one or more vehicles vs 28% for Westgate. 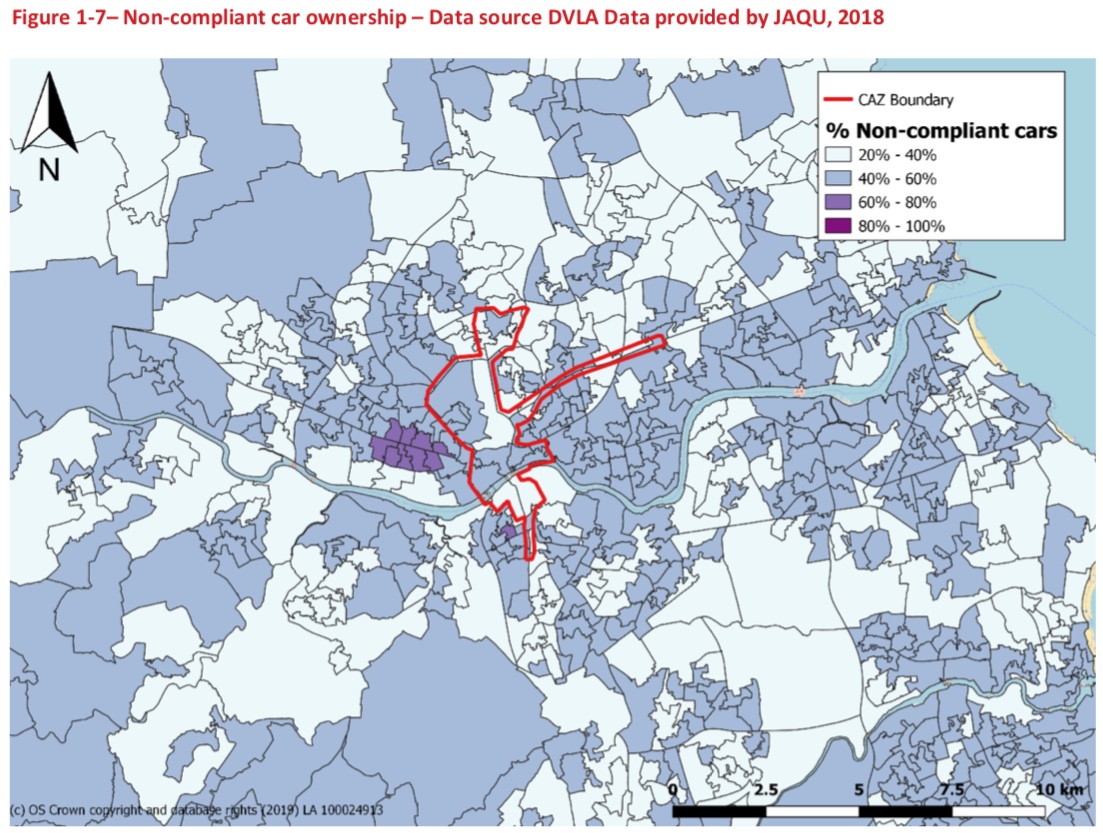 The analysis of the CAZ-D also showed that other areas surrounding the CAZ boundary might in some cases have increased air pollution as a result of the most polluting vehicles diverting to other routes. The map below gives some indication of this, although there is no suggestion that this will cause any of these areas to go over the legal limit. 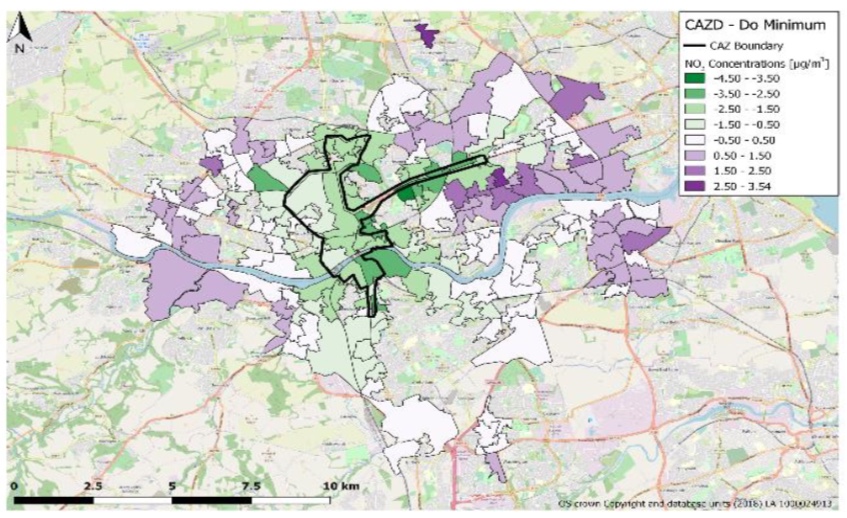 Air Quality if a CAZ-D is implemented vs the ‘Do Minimum’ scenario. Green = better; Purple – worse

For these reasons, the Council is proposing its alternative option.

The proposed tolls would only apply to Tyne Bridge, Swing Bridge and Redheugh Bridge, so there would be no charge for driving elsewhere in the city or in Gosforth.

While the effect on Gosforth or the Coast Road is therefore less certain, the are some potential advantages to the tolls:

That said, we don’t know at this stage whether tolls will be effective in reducing pollution as the Council hasn’t yet completed its modelling of this option. The legal requirement is for a plan that is demonstrably likely to meet air quality targets. If the modelling does not support the required timescales then this option would automatically be ruled out unless it can be supplemented by other measures.

The most likely case is that it will be effective in the area close to the bridges, but less so further away. Clearly, for Gosforth this is a concern. There will be vehicles that travel down Gosforth High Street or via Haddricks Mill to the Tyne Bridge, and the toll might reduce the number of vehicles doing that. That effect would be limited though as there would be nothing stopping other, possibly more polluting, vehicles from taking their place.

If the tolls aren’t sufficient then the Council would need to consider further options for  Gosforth High Street and in other areas where limits are currently breached. One possibility might be a local Charging Clean Air Zone covering just Gosforth.

Another option to reduce pollution but without charging might be to restrict traffic flow along Gosforth High Street.  SPACE for Gosforth’s analysis of Council data showed that the air was less polluted on Gosforth High Street during roadworks in 2016 when traffic was restricted, compared to the same period the following year when there was no restriction. The same analysis also showed that the temporary closure of Killingworth Road led to a substantial reduction in overall traffic levels.

Any revenue from the Charging CAZ or tolls has to be used by the Council for transport improvements, which could include further support to enable more people to use public transport, walking or cycling.

The Council have listed other measures they plan to consider for implementation in addition to either of the main options of a Charging CAZ or bridge tolls:

No doubt it will be possible to suggest other measures in response to the consultation. In our recent blog Your Right to Clean Air, we set out some of our ideas that we hope will be considered. Whatever the chosen measures are though they will need to contribute to meeting air quality limits by 2021, ideally also contributing to the Council’s secondary objectives.

There is plenty of evidence available for what will be effective to encourage people to cycle or to walk more. For cycling this requires the creation of a network of routes that are safe and feel safe, avoid conflict with other road users, and provide direct access to the places people want to go. For children there is even research as to what type of route parents prefer and might be willing to use to get to school or on other journeys.

Studies have also shown that the benefits of cycling and walking ‘outweigh air pollution risk’ in cities even if cycling or walking on busy streets.

Improvements for walking, like reducing the wait times at crossings, can be implemented within a few weeks. Other cities have also shown that it is possible to implement good quality cycle networks very quickly. See for example Seville, Calgary and Macon in the USA.

The more choice people have for how to travel the easier it will be to meet air quality targets. Where people are made to be car-dependent, because there is no public transport, no safe cycle routes and local services are too far away to walk, then behaviour change initiatives will be far less effective.

Walking and cycling will also help meet all three of the Council’s secondary objectives. In our blog The Case for Healthy Streets we shared links to evidence for how walking and cycling can benefit health, support local retail and economic growth, extend the reach of public transport, and improve access to employment opportunities for the unemployed.

The Council consultation will run from 6 March 2019 until 17 May. For further information see Newcastle City Council’s Air Quality webpage.

Following the consultation, the Council will produce its final plan, which must be submitted to government by 12 July 2019. In order for this plan to be approved by government, and considered for funding support, it will have to demonstrate that:

As it stands the Council has not yet completed its modelling so we don’t know which of the two options will best meet the criteria for government approval and funding. If one achieves compliance quicker than the other then that is the option that must be chosen to reduce the risk to public health as quickly as possible.

Newcastle City Council, Gateshead and North Tyneside were all directed by the government to complete and submit air quality plans in accordance with the government’s Air Quality Plan for Nitrogen Dioxide (NO2) in UK (2017).

This table, also from the Feasibility Study shows the percentage of vehicles that are non-compliant with CAZ standards nationally and locally. 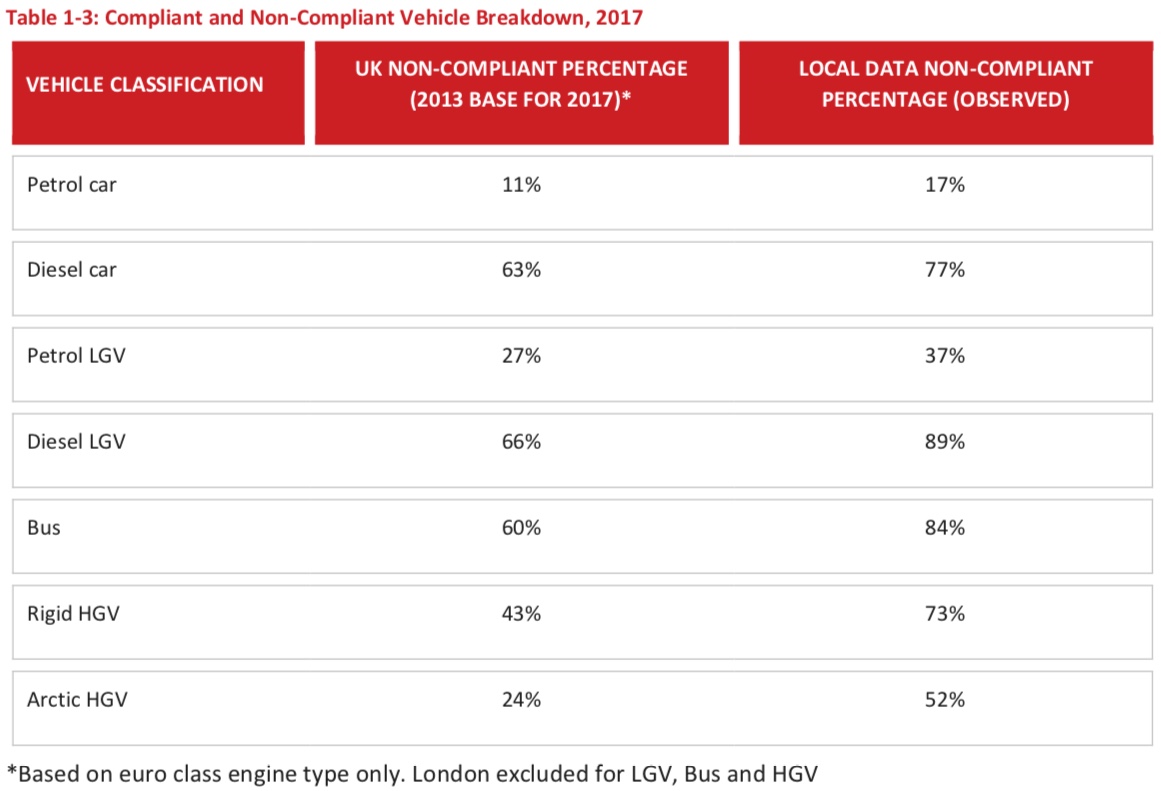 8 thoughts on “Which works best – Tolls or a Clean Air Zone?”