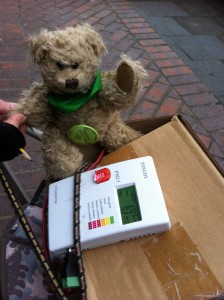 Members of SPACE for Gosforth were on Gosforth High Street on Saturday 17 October talking to local people and raising awareness of air pollution issues. We had with us two air quality monitors, one measuring PM2.5 and one measuring PM10.

PM2.5 is the name for very fine particles (Particulate Matter) mainly produced by diesel engines that float around in the air and are so small that they penetrate deep into human lungs. Once there they can get into the blood stream, causing a variety of health problems, damaging lung and even brain function. PM2.5 particles can include burnt oils, heavy metals, and toxic chemical compounds. According to the World Health Organisation (WHO), PM2.5 are responsible for a large number of cases of lung cancer and heart problems.

PM10 are larger particles that can also cause health problems, asthma, and lung damage. These particles, though not as damaging or as long-lasting as PM2.5, are still dangerous.

The other major pollutant of concern, which we did not have a monitor for, is NOx. NOx is a term used to describe the two gases nitric oxide (NO) and nitrogen dioxide (NO2) that are produced by diesel engines. NO is produced in much greater quantities than NO2, but reacts to form NO2 in the atmosphere. NO2 is associated with respiratory and lung diseases.

“Every year, it is estimated that 29,000 premature deaths are caused by poor air quality in the UK. For those affected, air pollution reduces life expectancy by an average of over eleven years. This is nearly 5% of all annual UK deaths.

“Air pollution is bad news for everyone. Groups such as children, older people and people with asthma are particularly vulnerable, and low-income and ethnic minority groups are also disproportionately affected.”

We set up the PM2.5 monitor, a very rare thing in the UK provided courtesy of John Urquhart from Save Gosforth Wildlife (2), in a child’s buggy partly to make it easier to transport around but also because children are at a height where they are often the most exposed to traffic exhaust fumes. 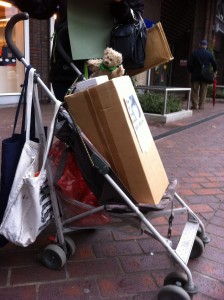 Whilst we are yet to analyse the data we did notice a few things from the PM2.5 monitor. PM2.5 are very small and light particles so tend to blow around in the wind a lot. We noticed that levels on the High Street, on a day with a steady stream of traffic though nowhere near as busy as a week-day rush hour, varied greatly from around 5 micrograms per cubic metre to a maximum of 50. The levels depended on where we positioned the monitor (whether we were in a street ‘canyon’ or more open area) and whether the wind was blowing or not.

The recommended safe limits for PM2.5 vary from country to country, but the EU regulations (3) currently state an annual average of 25 micrograms per cubic metre must not be exceeded whereas the World Health Organisation (WHO) guidelines (4) recommend keeping levels below 10. The WHO also estimates that for every PM2.5 increase of 10 micrograms per cubic metre, the risk of lung cancer is increases by 36%.  Separate research however suggests that there is no “safe” level for PM2.5 (5).

While it is not possible to estimate an annual average from one afternoon’s worth of readings, we will be looking at the data more closely in the coming weeks and working with Professor Margaret Bell from Newcastle University to see if we can draw any conclusions. One thing we can be sure of though is that air pollution is a serious problem and one that urgently needs addressing.

See our earlier post for ways to reduce this pollution such as reducing car journeys by encouraging non-polluting alternatives like walking and cycling (6).

(2) The Save Gosforth Wildlife campaign

(5) “Safe” levels of air pollution could still be harmful.