It is now over eighteen months since wands were installed on Gosforth High Street as part of the Council’s response to Covid. This blog looks beyond the look and feel of the wands, focusing instead on their impact on traffic volumes, air pollution and road safety, and suggests specific actions that could be taken to help the High Street thrive in future.

A Bit of History

Pollution, safety, noise and congestion have long been concerns on Gosforth High Street.

On the plus side, people listed the High Street’s role as a community hub, with good quality independent shops, pubs and restaurants. The list of “buts” was longer: noise, pollution, too much traffic, not feeling safe, parking, “Too much concrete, not enough green’’.

In 2019, we ran a Gosforth-wide survey and the answers were much the same, which we wrote up in our blog Your Streets – Your Views – Gosforth High Street. Too much traffic, poor air quality and noise were the top three concerns. 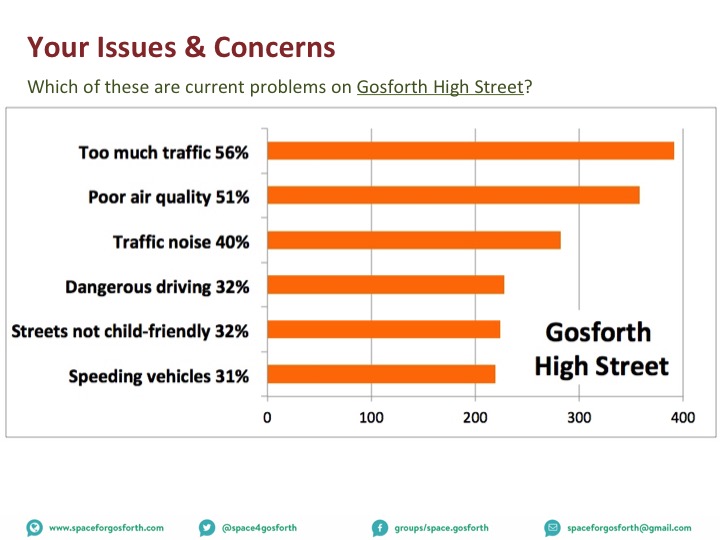 DEFRA have estimated that pollution, congestion, carbon emissions, traffic collisions, lack of physical activity (because high levels of traffic stop people walking and cycling) and noise, cost the UK billions of pounds each year. We wrote about this in our blog Billion Pound Issues on Gosforth High Street.

At the end of 2021 traffic volumes were 15% lower than in 2018 and 2019. This is despite the ongoing roadworks on the A1 and warnings in late 2020 that across the city traffic levels were back to pre-pandemic levels and could get worse.

Less traffic is generally a good thing. It means safer streets, less pollution, less carbon emissions and less noise, making it more pleasant (or at least less unpleasant) for people to stop and shop on the High Street. Moving vehicles away from the pavement to a single lane in towards the middle of the road further reduces noise levels for people shopping on the High Street. 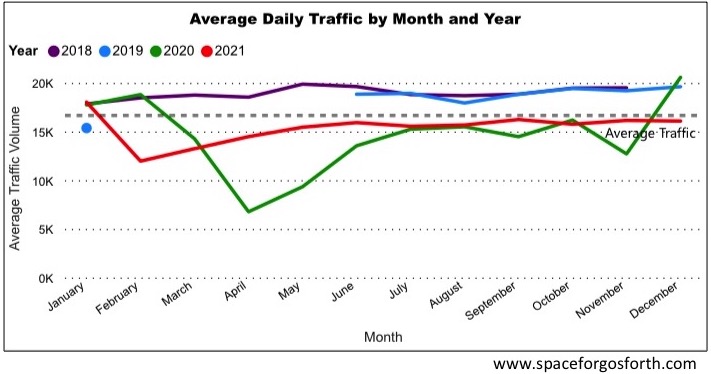 Traffic volumes in 2021 were similar to late 2020 so it is possible air pollution levels will have remained just under the legal limit. This would be substantially better than previous years, including 2017 when Gosforth High Street was the most polluted street in Newcastle. 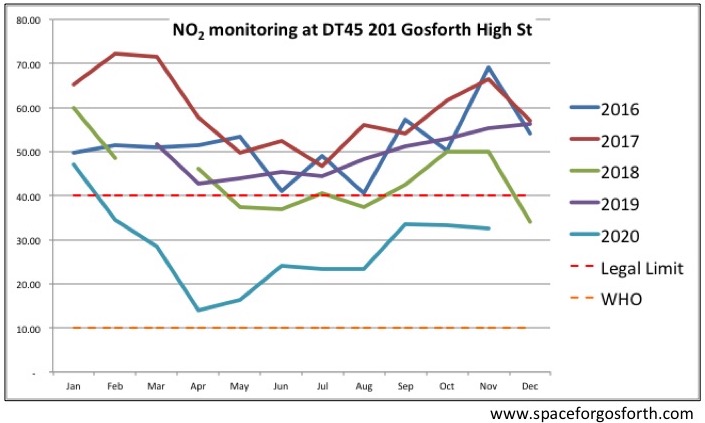 If air pollution measurements in 2021 are less than the legal limit, the Council would be bound by the Air Quality Standards Regulations 2010 to “ensure that [pollution] levels are maintained below those limit values” in future. 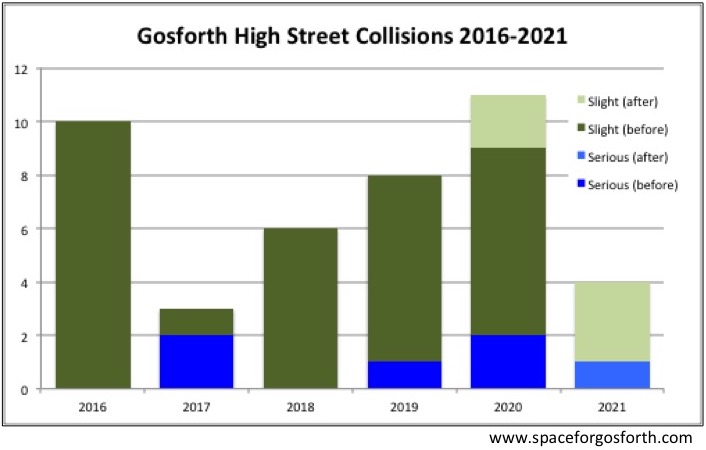 Road Traffic Collisions on Gosforth High Street before and after the wands were installed.

The one serious injury in 2021 was by Regent Centre where a ten year old boy was struck by a driver in a Land Rover. This was in the section with two lanes heading north and a 30mph speed limit. SPACE for Gosforth has previously proposed the 20mph speed limit is extended north to past Gosforth Academy to be safer for school children crossing the road.

Safety could be further improved by extending the single-lane 20mph layout to north of Gosforth Academy, and by setting vehicle lanes to be no wider than 3m.

The look and feel could be improved by replacing the temporary wands with high quality materials similar to the Grey Street proposals, including planters where there is space.

Continuous all age & ability protected cycle lanes & cycle parking would increase the people-moving capacity of the High Street and make it safer and easier for people to cycle to the shops. Most of Gosforth, Kenton, Jesmond and High Heaton are within a 15 minutes cycle ride of Gosforth High Street.

Decluttering the pavements, adding more planting and benches, and creating a continuous pavements over side roads would make the High Street more accessible and more pleasant to use on foot. With cycle lanes added, the existing bollards on the pavement could be removed adding 60cm to the width of the pavements.

Crossings by Regent Centre could be improved by removing the central ‘sheep pen’ so people walking can cross in one go. We have also previously proposed moving the crossing by Elmfield Road 70m south to be between Elmfield Road & The Grove.

Street ends could be pedestrianised like by Woodbine Road to create additional space for events or for more seats or planting. For example, Trinity Square could be extended across West Avenue and/or Ivy Road.

Even with these changes, there would still be a vast amount of space allocated to vehicles on and around Gosforth High Street. Some consideration could be given to whether this could be put to better use, either temporarily, for example for a street market, or more permanently. 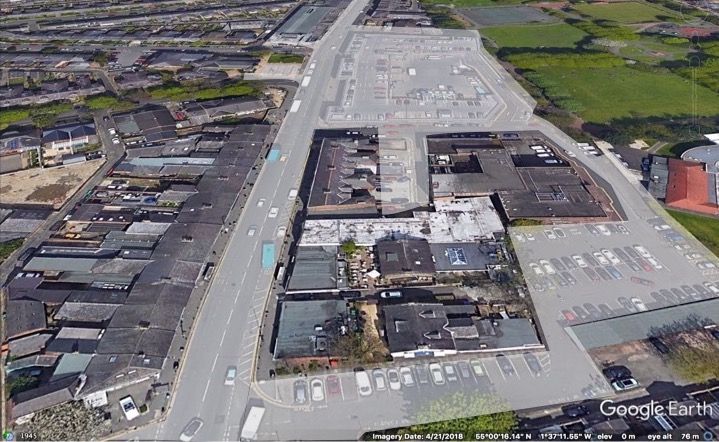