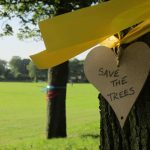 SPACE for Gosforth has received a response to our Open Letter to The North East Local Enterprise Partnership. In that letter we sought assurances that the funding for the Blue House, Jesmond Dene Road and Haddricks Mill proposals would only be released if those proposals met the NELEP's own commitments to reduce carbon emissions from transport and supported the use of shared and sustainable modes of transport. END_OF_DOCUMENT_TOKEN_TO_BE_REPLACED
Follow @space4gosforth