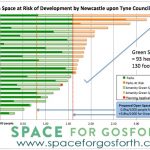 Newcastle City Council has just published its draft Development and Allocations Plan, which is the second part of the local plan that, with the first part The Core Strategy and Urban Core Plan, will guides how the city is to be developed up to 2030. As a result of our investigations we believe 93 hectares of Green Space, equivalent to 130 football pitches, could be built on as a result of the new standards. END_OF_DOCUMENT_TOKEN_TO_BE_REPLACED
Follow @space4gosforth