Newcastle City Council confirmed in February, following an eighteen-month trial and six-month consultation, that the arrangements at Stoneyhurst, Dene and Salters Bridges would be made permanent to help make local streets safer, cut carbon emissions from driving and promote active travel.

The map below shows the location of Salters and Stoneyhurst Road bridges and average annual daily traffic levels on Station Road between 2013 and 2021. Both bridges were closed to motor traffic in August 2020. Salters Bridge was previously closed to traffic during the Killingworth Road roadworks between July 2017 and October 2019. 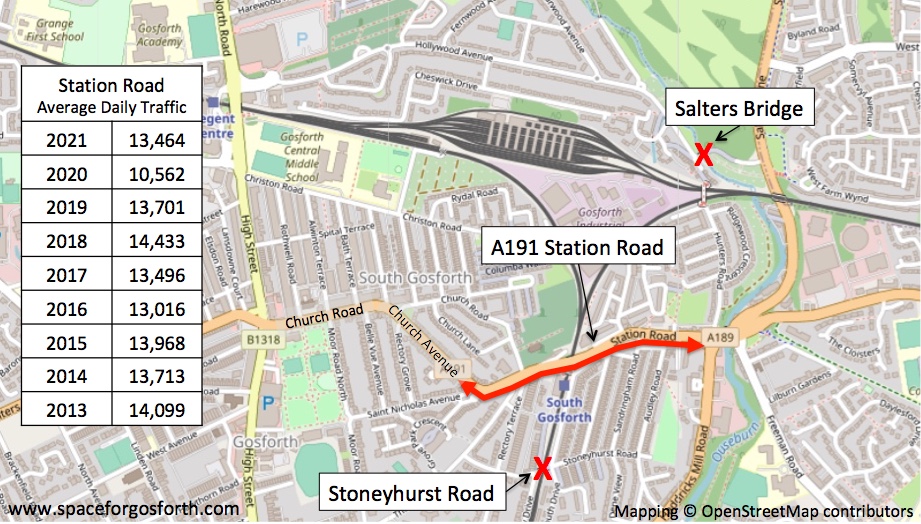 One of the main concerns raised by people responding to the Council consultation was that (they believed) these closures would lead to “displaced traffic / congestion”. We now have nineteen months of traffic data since August 2020 that shows traffic levels on Station Road and Sandy Lane (north of Gosforth Racecourse) are broadly unchanged from previous years.

Station Road and Sandy Lane are neither busier nor more congested following closure of the bridges. Meanwhile Hollywood Avenue and Stoneyhurst Road have much less traffic.

This is one reason why the Council could “set aside” any objections due to displaced traffic, as there simply isn’t any evidence of additional traffic on adjacent main roads. The Council needs to share this information so people commenting on future LTN consultations better understand the likely impact on traffic in their local area.

Even if traffic levels had increased on Station Road (which didn’t happen), there still wouldn’t be a good case for using Stoneyhurst Road or Hollywood Avenue as overflows for ‘displaced’ main-road traffic, as these minor roads are neither intended nor designed for high levels of vehicle traffic.

Despite this, the Council was still (in our view unfairly) accused of “ignoring” residents’ views. Clearly there is still a need for education so that people more widely understand how traffic reacts (and has reacted) to road changes. Local Councillors and community groups could help with this, and reduce community tensions, by sharing facts and relevant information in local leaflets.

This effect of “disappearing traffic” is well known and understood by traffic professionals. Researchers looking at over 70 case studies found that “predictions of traffic problems are often unnecessarily alarmist, and that, given appropriate local circumstances, significant reductions in overall traffic levels can occur, with people making a far wider range of behavioural responses than has traditionally been assumed.“

While the traffic levels on Station Road will have benefited from more home-working and people travelling less due to fuel costs, the study shows that “disappearing traffic” would happen even without these.

We can conclude that the bridge closures have helped to reduce traffic levels locally in Gosforth and have contributed towards the necessary 20-50% reduction in miles driven by 2030 to help achieve net zero targets.

That doesn’t mean that traffic levels on Station Road are ok. Just like before 2019, it still has high levels of traffic making it hard to cross and dangerous to cycle. These could be mitigated, for example with additional crossings and protected cycle lanes. The east end of Station Road is also part of the South Gosforth Air Quality Management Area and in 2016, before Killingworth Road roadworks, pollution measurements exceeded the legal limit.

If you live on the A191 – Church Road, Church Avenue or Station Road, or other main roads around Gosforth – please let us know what you think could be done to cut traffic and/or make the road safer.

Further information is provided below about feedback to Newcastle City Council’s Stoneyhurst Road and Salters Bridge consultations, and on traffic levels on Station Road and Sandy Lane.

* NB there was no geographical restriction on who could respond, nor any limit on the number of responses per person.

As we have said, traffic levels on Station Road and Sandy Lane did not increase. Road access for vehicles was retained to all properties. We have also previously looked at journey lengths and our analysis was that very few journeys would be noticeably longer as a result of this change.

The Council’s Integrated Impact Assessment says “data does not indicate an impact on the operation of the wider highway network from any of the bridge closures to vehicles to indicate that they need to be reopened to alleviate this issue. Despite having been closed, (even when three bridges impact on the same surrounding highways), those highways have not seen significant differences in journey times or speeds.“

The fact that traffic in Newcastle grew by 14% between 2010 and 2019, which has never been the subject of consultation, is much more likely to have negatively impacted journey times.

As there is no additional traffic, there is no reason to think air pollution will be any worse on Station Road as a result of these changes. There is substantial evidence that investing in active travel benefits local businesses, for example this report from Transport for London or our blog Can protected cycle lanes be good for business?

Traffic Volumes on A1056 Sandy Lane, Gosforth, measured east of the MOT station.

Reports setting out the Council’s decisions for each of the five bridges are published here:

Further information on low traffic neighbourhoods In Newcastle can be found at https://www.newcastle.gov.uk/neighbourhoods