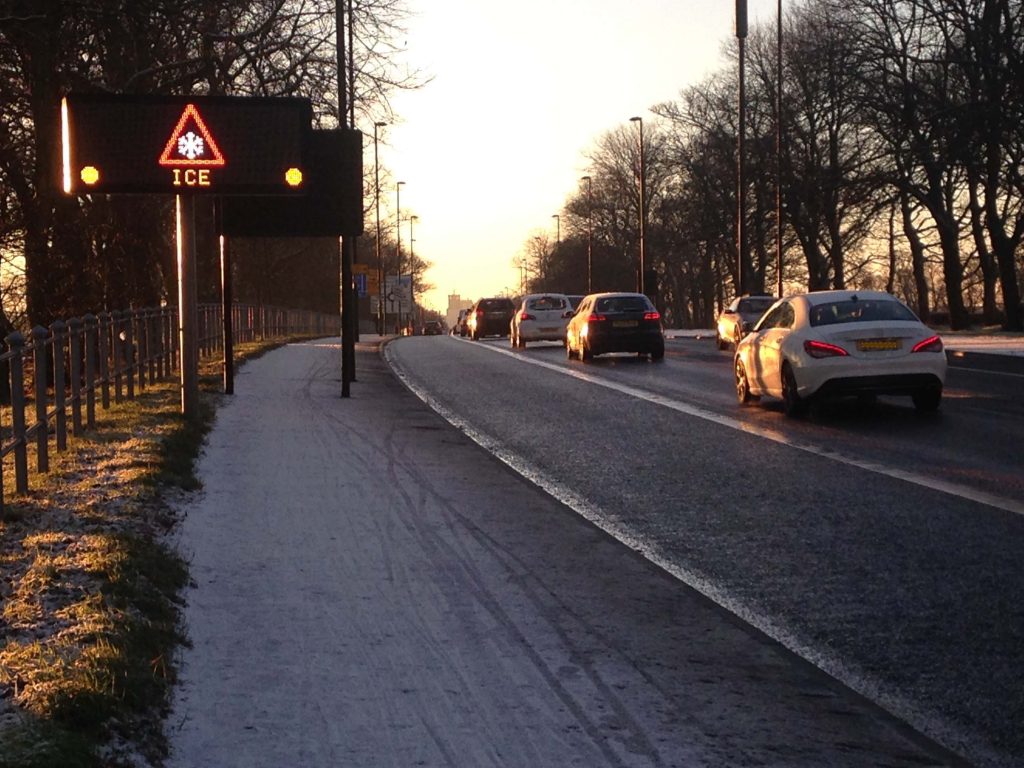 In January 2018, SPACE for Gosforth, together with SPACE for Heaton and SPACE for Jesmond wrote to Newcastle City Council to express our concern that no cycle ways and few pavements are cleared of ice in winter, despite it being the Council’s own policy to encourage people to walk and cycle more often.

UK Roads Liaison Group best practice for local authorities suggests that snow and ice clearing approaches should be developed with local stakeholders and so we asked that this be discussed as part of the Cycle Stakeholder Forum on Thursday 25 January 2018.

We also shared the following map that shows that if you were to try to cycle using the currently gritted network you would have to use either 40mph+ or multi-lane roads  to enter the city from the north, east or south. 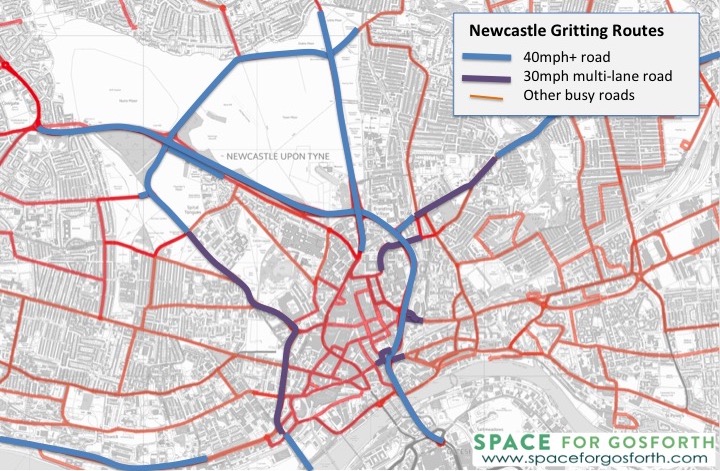 Following discussion at the Cycle Stakeholder Forum, we understand that:

This is the letter that we sent to the Council.

Re: De-icing pavements and cycle routes in winter.

We are writing as we are concerned by the Council’s current stance that no cycle ways and few pavements are cleared of ice in winter and that this is leading to a number of negative consequences, not least the potential and actual injury of people cycling or walking.

From speaking to Council officers we understand that budget is a significant issue, although also a matter of prioritisation as clearly the Council does have a budget for gritting including via its contract with Colas Ltd (1). That prioritisation however seems to be largely at odds with the Council’s own strategy. It is also at odds with UK Roads Liaison Group best practice guidance (2) as applied to the implementation of section 41 part 1A of the Highways Act 1980 which states that Newcastle Council as a highways authority is “under a duty to ensure, so far as is reasonably practicable, that safe passage along a highway is not endangered by snow or ice.” (3)

Clearly under current policy, safe passage for people walking or cycling is endangered, and many might consider advice for people cycling to stick to the gritted network to be unacceptable given the only gritted routes into the city are dual carriageway and often with speeds that mean any collision would lead to serious injury or death.

It is also easy to determine that it would be reasonably practicable to de-ice the City’s main cycle routes and pavements both from the fact that a number of other local authorities do so and from the legal definition of ‘reasonably practicable’ that requires that risks must be averted unless there is a gross disproportion between the costs and benefits of doing so (4). In this case the benefits are obvious in reducing harm, in supporting Council strategy to promoting sustainable transport choices (Policy CS13); in meeting national air quality targets; and in maintaining access to the city for people who wish to, or have no choice but to, walk or cycle.

If the Council is serious in its wish to support the growth of active travel to improve the health, environment and economy of the City and its residents, then this is an issue that needs to be addressed. The question is not if but when, and planning for this should start immediately.

We are grateful that the Council has already taken up our request to publicise the lack of ice clearance so that people wishing to cycle are aware of the potential dangers.

In addition we ask that the Council prepares a target Winter Service Policy for walking and cycling networks with stakeholders (as suggested in the UK Roads Liaison Group best practice) including the Cycle Stakeholder Forum. This should include routes to be cleared, effective approaches for how they are to be cleared and also consideration of funding, though work on the former should not be delayed while funding is sought.

To support this work we have included below links to Highway Authorities in London, Manchester, Bristol, Edinburgh, Glasgow, Nottingham and Cambridgeshire, all of which have plans for clearing snow and ice from their cycling networks.

I would be grateful if you could include this on the agenda for the next Cycle Stakeholder Forum along with a draft plan from the Council for how it will develop the Winter Service Policy.

Highway Authorities that clear cycle routes
Manchester grits “over 50km of pavements and cycle paths, including busy pedestrian areas in the city centre”
http://www.manchester.gov.uk/directory/154/gritting_routes
TfL and London’s boroughs  “ensure that the Cycle Superhighways and other cycling routes remain safe to use during the winter months.”
https://tfl.gov.uk/info-for/media/press-releases/2017/january/tfl-and-london-boroughs-prepared-for-wintry-weather
Bristol grits “the Bath to Bristol and Castle park cycle paths”
https://www.bristol.gov.uk/streets-travel/roads-pavements-winter
Edinburgh has a list of Cycleway Priority 1 routes which “will be the first to receive treatment whenever weather conditions dictate, and will be pre-treated where possible, when frost, snow or ice is forecast”
http://www.edinburgh.gov.uk/info/20047/severe_weather/1139/priority_system_for_winter_gritting_routes
Glasgow states that “Winter maintenance is crucial in terms of both the economy and road safety, and is carried out to assist the safe movement of road users including buses, cyclists, motorcyclists and pedestrians.”
https://www.glasgow.gov.uk/index.aspx?articleid=17050
Nottingham’s Winter Service Plan sets out priorities and response times for treating cycle ways.
http://www.nottinghamcity.gov.uk/winter
Cambridgeshire has “two quad bikes that treat over 50km of cycleways in Cambridge City and a dedicated team of around 70 volunteers who go out and salt the pavements.”
https://www.cambridgeshire.gov.uk/residents/travel-roads-and-parking/roads-and-pathways/gritting-roads-cycleways-and-paths/

The revised Winter Service Policy is to be presented to Council Cabinet on Monday 19 November. Details can be found on the Council’s website.

The updated policy (item 6 on the agenda) includes statements on both walking and cycling.

Most of the walking routes to be treated are in the city centre but they also include Gosforth High Street, Ashburton Road, Kenton Park shops, Park Avenue shops, Brunton Park shops, Melton Park shops and Wansbeck Road shops.

Cycling routes will not be treated except where they are on a road that will be gritted e.g. a shared bus and cycle lane, or where they share a pavement with one of the named footpaths.

The updated policy also contains a statement in a section on legal responsibility (page 3) that says that “it is recognised that it would not be practical for a Highway Authority to treat every road and footpath in the event that ice forms and/or snow falls.”

This does not exactly align to Section 41 of the Highways Act 1980 that says that Highway Authorities must “ensure, so far as is reasonably practicable, that safe passage along a highway is not endangered by snow or ice.”  We would welcome any input from any legal professionals to assist in clarifying the extent of the Council’s legal responsibilities.

1 thought on “Snow and Ice”