Since Black Friday, 25 November 2016, readings from the new air quality monitor at the Salters Road car park say the average level of nitrogen dioxide (NO2)  has been 50.3 micrograms per cubic metre (μg/m3) or 26% above the legal limit. The legal limit is 40 μg/m3 averaged over a year. It was high levels of nitrogen dioxide that led to the creation of the South Gosforth Air Quality Management Area in 2008. 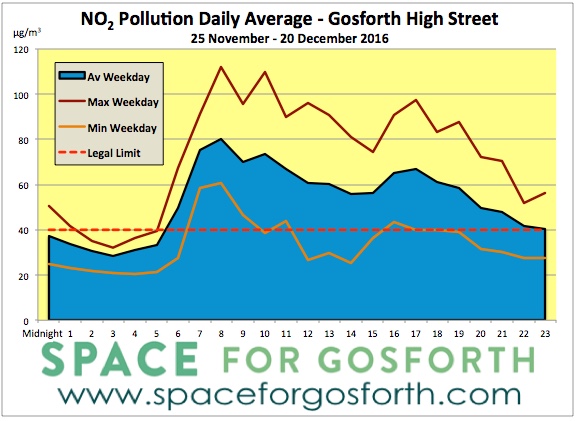 While air pollution is damaging to health, personal exposure travelling further by car to an out of town centre rather than Gosforth High Street is likely to be even greater, and if you are able to walk or cycle instead, the benefits of doing have been shown to outweigh the negative impact of pollution.

The graph above shows average readings for each hour over the course of a weekday, with the maximum and minimum lines showing the highest and lowest average values. During this period, the average pollution on weekdays (the black line) has only been under the legal limit between midnight and 5am. For the most part the highest readings are from the Monday average and the lowest readings from Wednesday and Thursday. The highest reading overall was 217.1 μg/m3, recorded on Monday 28 November between 8.15am and 8.30am.

Each year in the UK around 40,000 deaths are attributable to exposure to outdoor air pollution, which is about 106 people dying every day of the year. These deaths and other illnesses caused by air pollution reportedly cost the UK economy £20bn per year.  We have previously looked at the different health conditions caused by air pollution, including cancer, infertility and heart and lung disease, as these formed part of our objections to the original plans for the Blue House Roundabout (also part of the South Gosforth Air Quality Management Area).

Air pollution is harmful to everyone. According to the Royal College of Physicians, some people suffer more than others because they live, learn or work near busy roads or are more vulnerable because of their age or other medical conditions. This would include residents living on the Great North Road/Gosforth High Street, children going to school at Gosforth Academy and other nearby Gosforth schools and people who work on Gosforth High Street. For those passing through, the most affected will be people travelling by car, especially children and older passengers, as pollution can become more concentrated inside vehicles.

In Gosforth these graphs show that the primary source for NO2 air pollution is from vehicle exhausts. Consumer organisation Which? found that, as well as almost all modern diesel cars exceeding nitrogen dioxide emissions limits, “one in ten petrol cars produced so much NOx that they too are breaking emission limits“.

Although the South Gosforth Air Quality Management Area is the result of high concentrations of nitrogen dioxide, SPACE for Gosforth’s own monitoring last year showed that particulate matter (PM2.5) levels are also a cause for concern with recordings consistently above the WHO limit. PM2.5 is also emitted predominately from diesel exhausts as well as from wear and tear on tyres and brakes.

With this new data we can estimate the typical exposure for different activities during the last month. For a child travelling to school between 8am and 9am then returning home between 3pm and 4pm, the average exposure during that journey would have been 68.0 μg/m3. The worst air quality would have been experienced by someone commuting between 7am and 9am in the morning and 5pm and 7pm at night.

Prior to Black Friday, pollution levels were not as bad but still high overall, averaging 34.9 μg/m3 for the previous two months including the October half term. This is a reduction compared to monthly averages from October in previous years, which have been 50 μg/m3 or more, though those averages were from sites further south on Gosforth High Street. 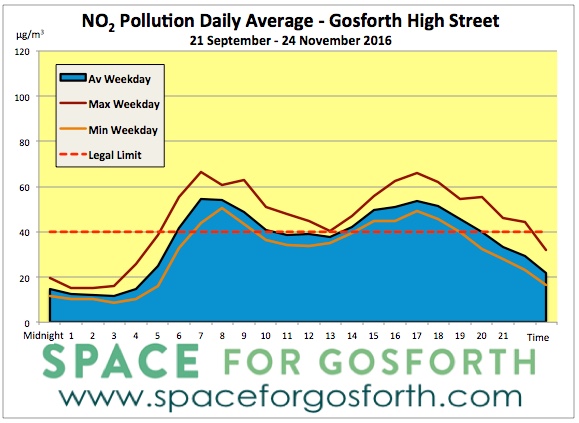 This reduction may be due to the new single lane operation going north meaning that, although there may be the same number of vehicles and pollution overall, the impact is spread over a wider area. It could also be indicative of the temporary benefit of a higher capacity junction before vehicle usage rises to fill the new capacity, though ultimately this will lead to worse air quality.

We can also determine from this graph that background (non-traffic) NO2 levels are less than 10 μg/m3, as have been recorded between about midnight and 4am.

For those that wish to look at the source data themselves it is available on-line from the Newcastle Urban Observatory . The data used in the above graphs is from the Aq_Mesh High Precision Air Monitor located in the Salters Road car park. Measurements of NO2 are recorded in parts per billion (ppb) which need converting to μg/m3. As a guide, at winter temperatures, μg/m3 are approximately double ppb figures.

The air quality monitor is part of the Urban Observatory project, showing real-time sensor feeds from across the city. These sensors are deployed by Newcastle University and other partners.