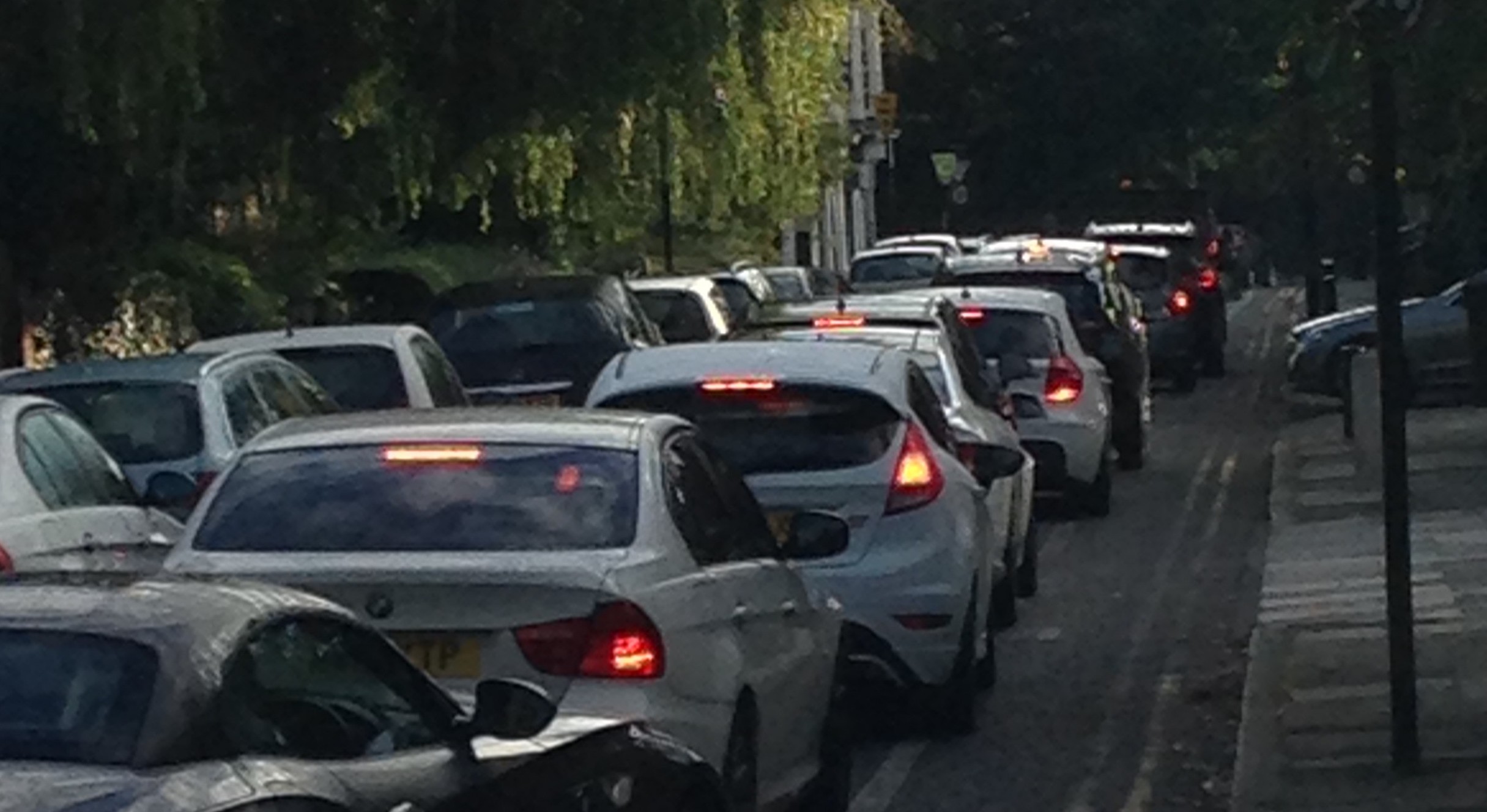 The website CityMonitor recently published an article “How Google Maps is ruining your neighbourhood“. The article explains that, since they were introduced in 2009, Sat Nav apps have caused an increase of traffic on minor roads.

While the sales pitch of Sat Nav apps is that they enable drivers to avoid congestion, the actual outcome is that minor roads can now be just as congested as main roads.

In effect traffic has been displaced from main roads onto minor roads.

How might Sat Navs be affecting traffic in Gosforth?

Clearly there are quite a few minor roads in Gosforth that are busy with traffic, including Elmfield Road pictured above.

We’ve had a look at what routes Google Maps recommends for driving through Gosforth. As the CityMonitor article says, many of these routes use minor roads that are not designed for high volumes of traffic.

Not all roads are affected. Some, like Bath Terrace in the picture below, have traffic “filters” that prevent vehicle traffic using them as through routes. 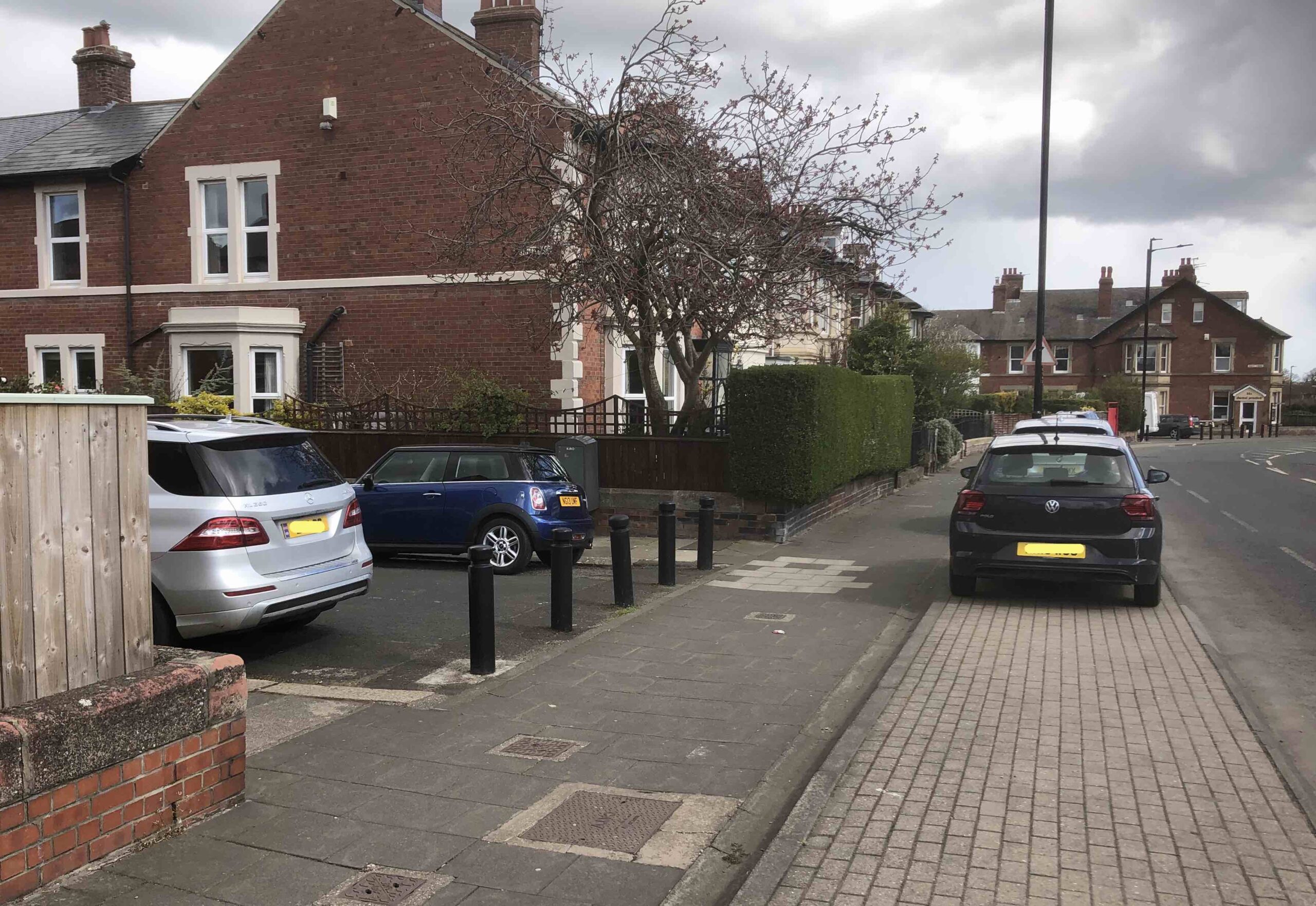 Newcastle has a main road network, defined as part of its Local Plan. The map below shows the main roads for driving in the Gosforth area.

These are the roads that are intended for, and designed to cope with, large volumes of traffic. 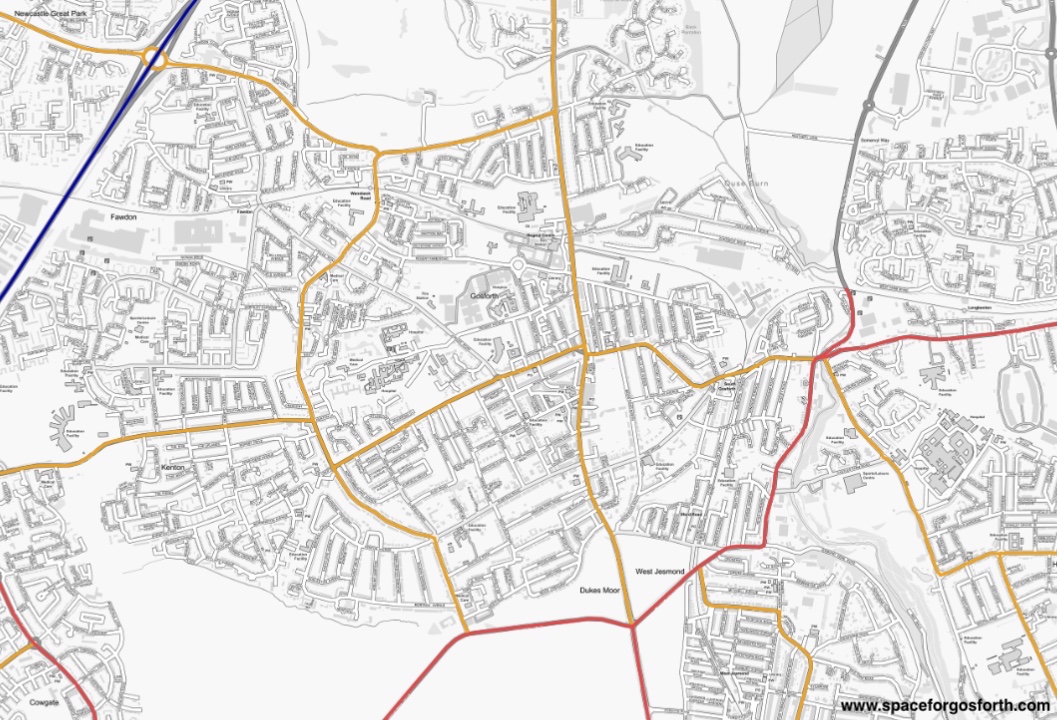 There are three types of main road in Newcastle’s plan.

Other roads, shown in white, are considered to be minor roads for access to people’s homes and local destinations.

We found nine example part-routes where Google Maps has recommended using minor roads that are not part of the main road network.

In some cases the minor roads were quicker, but not always. Where minor roads are quicker, this is likely to be temporary as Sat Navs direct more traffic to the route undoing any benefit.

Noticeably, both historic and new Low Traffic Neighbourhoods like Brunton Park, Melton Park, Gosforth Terraces and Garden Village do not have any routes through them because they have been designed to prevent through traffic.

It is also noticeable that in many cases it would be just as quick, if not quicker, to cycle rather than drive.

In each case we have highlighted which minor streets are being used.

Route 1: via Elmfield Road and The Grove.

Route 2: via Lindon Road, Hawthorn Road and The Grove. 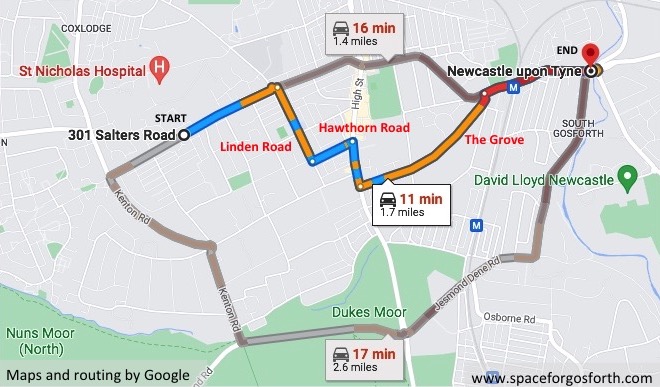 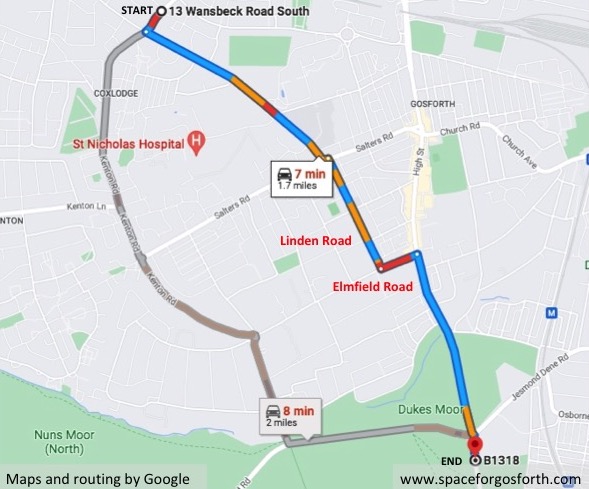 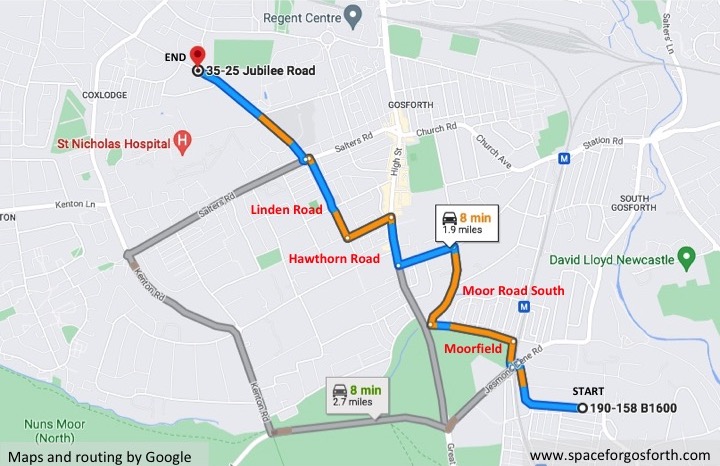 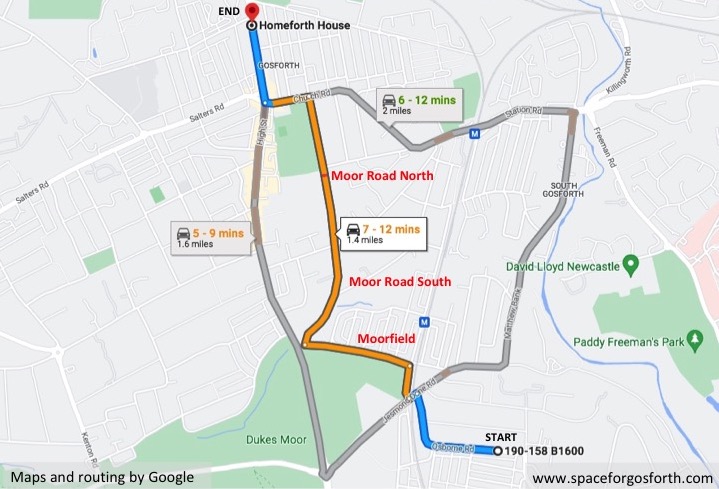 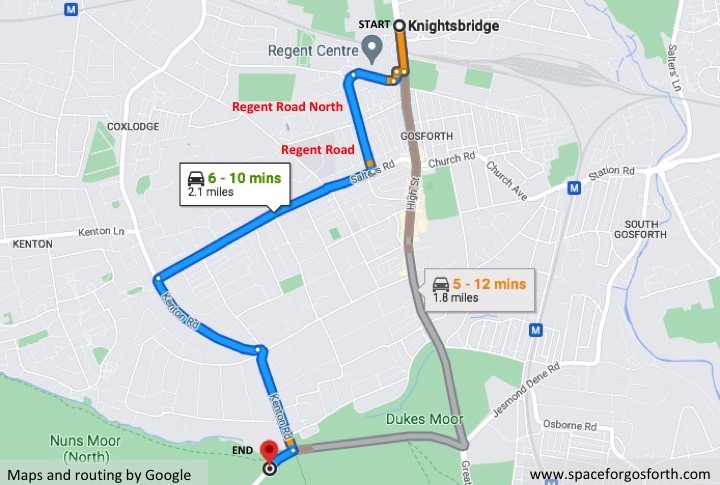 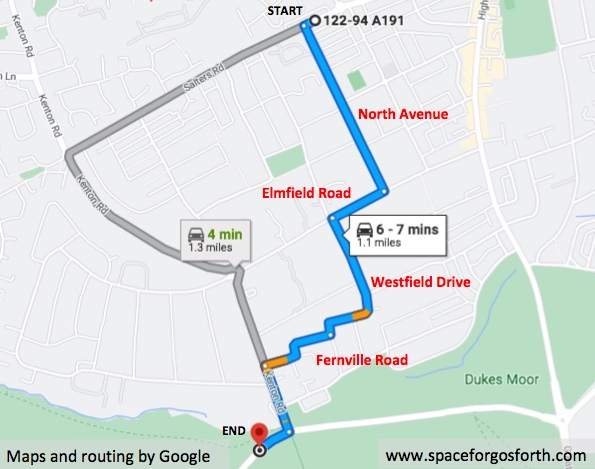 What can be done?

It is worth saying that it is completely legal currently for people to drive on these minor roads to avoid main road traffic. The effect of this though, is more noise, exhaust fumes, and more danger for people who live on these roads or using them to walk or cycle.

Higher levels of traffic at peak times of day, just when children will be travelling to or from school, act as a barrier to prevent families walking or cycling the school-run. DfT estimate one in four cars on the road at peak times are on the school run. For more families to commit to walking or cycling, traffic levels have to be consistently low at the times they want to travel, not just on a quiet Sunday morning.

From an engineering perspective, it is quite simple to stop traffic being displaced from main roads onto minor roads. All it needs is a few bollards and/or some planters to prevent through traffic, just like on Bath Terrace (see previous picture).

We know, not least from experience on Salters Bridge, Stoneyhurst Road and Castle Farm Road, that stopping through traffic on minor roads has practically no impact on adjacent main roads but it does improve quality of life for residents, reduce road traffic collisions, and enables more people to walk and cycle.

It is also a necessary pre-cursor to any traffic calming to make main roads safer.

If you think we have missed any routes please do let us know via the comments, and please do let your local Councillors know if you are concerned about traffic on minor roads.

If you want to read more, this is the City Monitor article.

Have you noticed your neighbourhood streets getting busier…?https://t.co/L16S6mr2Af