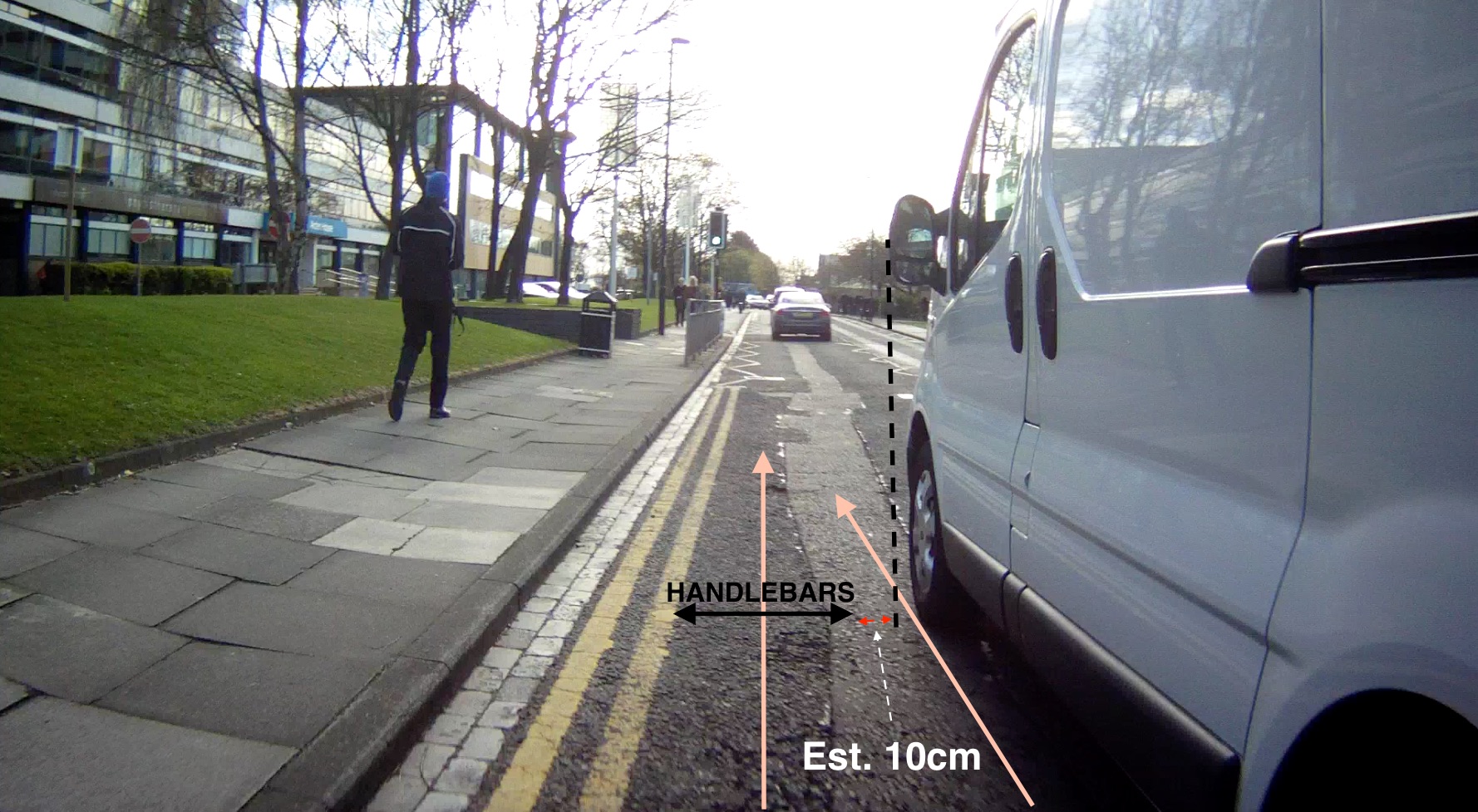 A new parliamentary petition, which you can sign here, was created on 29 April to seek a permanent, minimum 1 – 1.5m passing distance when overtaking cyclists.

Why is this important?

We know that getting more people cycling will help address issues like pollution and congestion, but that many people choose not to cycle because they don’t feel safe on the roads. This is as true in Gosforth as anywhere else.

For example, the 2013 – British Social Attitudes Survey found that 69% of women and 53% of men felt it was too dangerous for them to cycle on the roads. 48% of people (men and women) who had cycled in the last 12 months also felt the roads were too dangerous. Many other surveys give the same findings.

Also in the British Social Attitudes survey, 37% said they could just as easily cycle many of the journeys of less than two miles for which they currently use a car. That would make a massive difference to the amount of traffic on the roads.

The picture above was taken from a camera mounted on a bicycle’s handlebars during the morning school run, close to St. Charles’ Primary School. The road, passing through the Regent Centre, is also on a route a child might want to take to get to Gosforth Academy or to Gosforth Central Middle School, or travelling to or from Gosforth Pool or Library.

Our estimate from the photo is that the van’s wing mirror passed about 10cm from the end of the cycle’s handle bars – and not much further from the rider’s head. No one was hurt, but it is exactly these sort of near misses that influence whether people choose to cycle at all.

What we don’t know is what the driver of the van was thinking. It is possible they  thought they were giving ‘plenty of room’ as is recommended (though not formally required) by the Highway code (Rule 212). Having a set minimum will help drivers too by making it clear how much space to leave when overtaking cyclists on roads without dedicated cycle lanes.

Will it make a difference?

In Queensland, Australia where they have just made permanent a safe overtaking law following a successful 2 year trial they found that, while the rule was hard to enforce, 75% of cyclists and 60% of motorists said that drivers gave more room than they used to prior to the start of the trial.

On busy main roads the safest and most popular option that will encourage the most people of all ages to cycle is to have separated cycle lanes. For roads without separate lanes, including the vast majority of roads in Gosforth, this proposed rule could be a life-saver.

According to Safe Cycling Ireland’s “Stayin’ Alive at 1.5” campaign similar rules have already been implemented in 26 US States as well as in Belgium, France and Portugal.

What you can do

When driving please make sure you give all vulnerable road users plenty of time and space – at least 1m if overtaking –  whether they are pedestrians, cyclists, motorcyclists, horse riders, children, older or disabled people, or learner or inexperienced drivers or riders.

You can sign the petition here. It takes just a couple of minutes.