People in Gosforth are becoming more and more concerned about pollution near major roads and especially on Gosforth High Street. As we have a high proportion of older and younger residents – those most at risk from its debilitating effects – this is not surprising. On Saturday the 17th of October members of SPACE for Gosforth spent time on the High Street with a pollution monitor measuring very fine particles (PM2.5s), one of the most dangerous types of pollution. 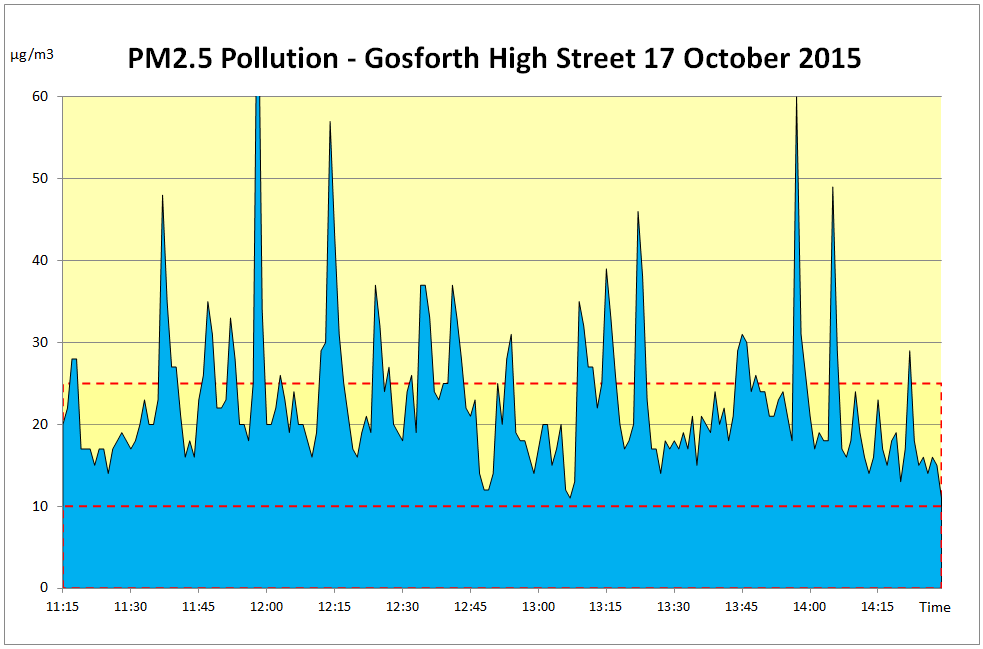 PM2.5s, as we shared in our last post on the subject, can contain burnt oils, heavy metals and a variety of chemicals. They can cause lung cancer and heart problems as well as affecting brain function. The usual way to measure the volume of these toxic compounds is in micrograms per cubic meter (µg/m3). The World Health Organisation (WHO ) recommends a maximum of 10 µg/m3 averaged over a year, whereas the EU sets a higher limit of 25 µg/m3, though experts we have spoken to expect this to be reduced. These limits are shown on the graph as red dashed lines.

Putting this into context, this was a fairly quiet Saturday and it is likely that the relatively strong wind depressed the measured pollution levels compared to what they would have been on a still day. The monitor was also set back from the road level with shop entrances to avoid blocking the pavement. Despite this, for the time we were measuring PM2.5 pollution:

While it is not possible to estimate an annual average from one afternoon’s worth of readings, these results show that all of us who live in Gosforth, or use the High Street, should be concerned. We do need to take action to reduce pollution, especially for Gosforth’s children and older residents who are most likely to suffer from its effects.  We set out in an earlier post how this might be done, but if you have ideas please share them with us too. We are also interested in hearing from people who have been affected personally by the pollution in Gosforth.

Key now is that the City Council is about to propose a variety of road changes across Gosforth which we hope will address the major cause of pollution in Gosforth – traffic exhaust fumes. We need to ask the Council to ensure that the reduction of pollution, as well as improved road safety, is prioritised in these schemes. This is the one main chance we have of making a difference in Gosforth.