In previous posts we looked at air quality data on Gosforth High Street and on Jesmond Road in the run up to Christmas last year, which showed a marked increase in pollution after Black Friday, 25 November 2016. In this post we look at what has happened to air quality at these sites since then.

As we might expect, air quality improved over the school Christmas holidays when traffic was lighter, with readings reducing to 23.8 μg/m3  from the post-Black Friday average of 50.3 μg/m3.

After the school holidays, the NO2 figures started to rise again to 45.5 μg/m3, so not as high as before, but still higher than prior to Black Friday and higher than the annual legal limit. 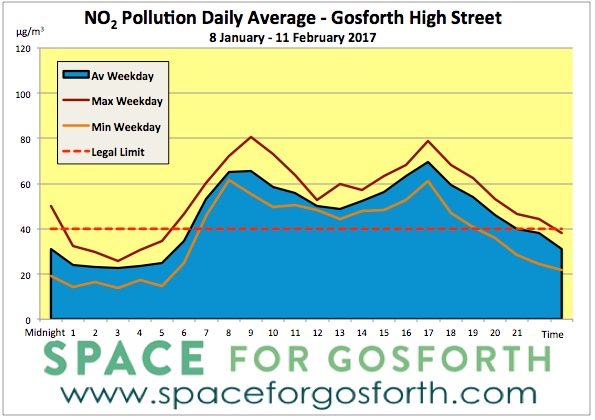 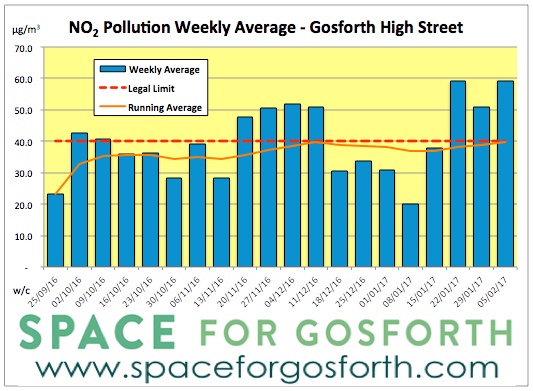 Overall, the average from the Salters Road car park monitors since 25 September 2016 is 39.9 μg/m3. If pollution remains at the same high level as for recent weeks then this will very soon be higher than the annual legal limit. This itself though is a maximum and we should be aiming at much lower levels in order to protect the health of residents, commuters and others that use the High Street. 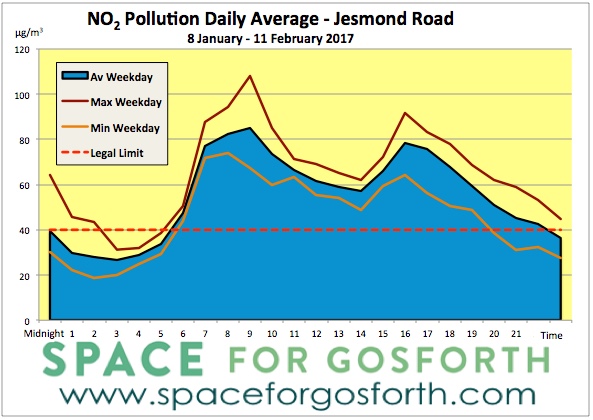 Similar to Gosforth, the weeks commencing 1 and 8 January are equal best for air quality at the Jesmond Road monitoring site at 36.2 μg/m3 but two weeks later is the second worst week so far at 68.0 μg/m3. The average to date is 52.5 μg/m3, 32% over the annual legal limit. 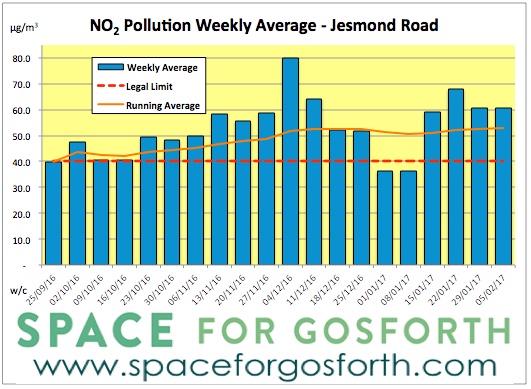 While we don’t yet have a full year’s worth of data, what we do have supports a strong need for action both in Gosforth and on Jesmond Road to enable alternative travel choices that can help improve air quality including walking, cycling and the use of public transport.

Further house building north of Newcastle including 715 new houses to be built in Cramlington is likely to make this worse especially when, according to SENRUG (the SE Northumberland Rail User Group) current rail services are only hourly during the day with no services between 18.20 and 20.00 during the week and none at all on Sunday.

At the same time, improvements in clean engine technology seem to have stalled with research for the Transport and Environment Group showing that “New cars consume on average 42% more fuel on the road than advertised in sales brochures” and that there has been “No improvement in average efficiency of new cars for four years”.  Other research from the International Council for Clean Transportation has shown that “Modern diesel cars produce 10 times more toxic air pollution than heavy trucks and buses“. This they attribute to stricter testing of larger vehicles.

Government Vehicle Licensing Statistics relating to Ultra-Low Emission Vehicles (ULEV) show that these were 1.2% of all new vehicle registrations in the year to September 2016. However, with a 2.3% increase in total vehicles there are still more non-ULEVs on the road than there were a year ago and a 2015 Government report on Energy and Emission Projections suggests (as per the diagram below) that oil-based fuels and petrol are likely to power the vast majority of vehicles until well into the 2030s. 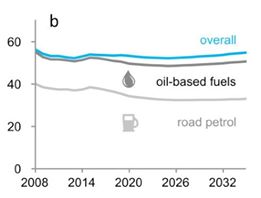 As we set out in our blog Black Friday Part 2 – Newcastle City Centre the Government, and by extension local Councils, are required to cut NO2 pollution to legal levels in the “shortest possible time” so clean engine technology, while worth supporting for the long term, appears unlikely to make any immediate difference.

Other measures that seek to reduce congestion by increasing the vehicle (as opposed to people-carrying) capacity of roads, but instead induce more traffic, will just add to the problem.

Madrid, Paris, Milan and Rome have implemented emergency measures, temporarily banning certain types of traffic from the roads. In the UK, many cities including London are considering clean air zones where highly polluting vehicles are either banned or are charged to use the roads. Nottingham has implemented a work-place parking levy and has used the money to invest in improving public transport. While these restrictions may be effective, they still need to be accompanied by investment in alternative ways of travelling.

For Newcastle, creating a range of good quality options for how people travel, rather than designing roads solely for vehicle flow, will mean people can choose how they get around instead of being forced to use a car. At the moment the choice not to drive is unavailable to many people here. Enabling that choice will help reduce the negative consequences of excessive amounts of traffic, including air pollution, that affect the whole community whether they drive or not.