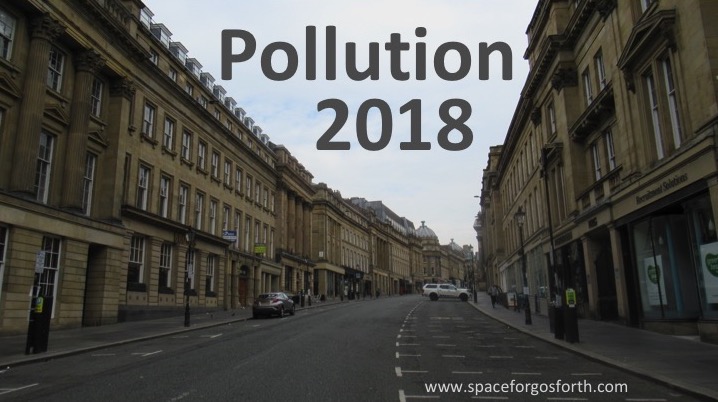 Newcastle’s Grey Street: “One of the country’s most beautiful car parks”

Nitrogen Dioxide (NO2) air pollution is easy to miss. It’s invisible and odourless but kills 360 people a year in Newcastle, Gateshead and North Tyneside and makes many more ill from asthma and other heart and lung conditions.

This blog summarises the official NO2 air pollution measurements for the calendar year 2018, which were published in October 2019.

In a previous blog we showed that pollution levels in 2016 and 2017 were strongly correlated to traffic volumes, however this doesn’t appear to be the case for Gosforth High Street in 2018. The only change we are aware of that may have contributed to this improvement is the introduction of newer buses in late 2017.

Air quality on Station Road improved as well and was 36μg/m3 in 2018.  In 2016, the last full calendar year in which Killingworth Road was open, it was 42μg/m3. Potentially in 2020, now Killingworth Road has reopened, it will return to its previous higher level.

Although not shown on the map, the North Tyneside measurement by the Four Lane Ends traffic lights also improved from 35μg/m3 in 2017 to 24μg/m3 in 2018. We have seen some people suggest that air pollution has been worse in Longbenton due to the ongoing Killingworth Road roadworks, but this is not reflected in the official measurements. 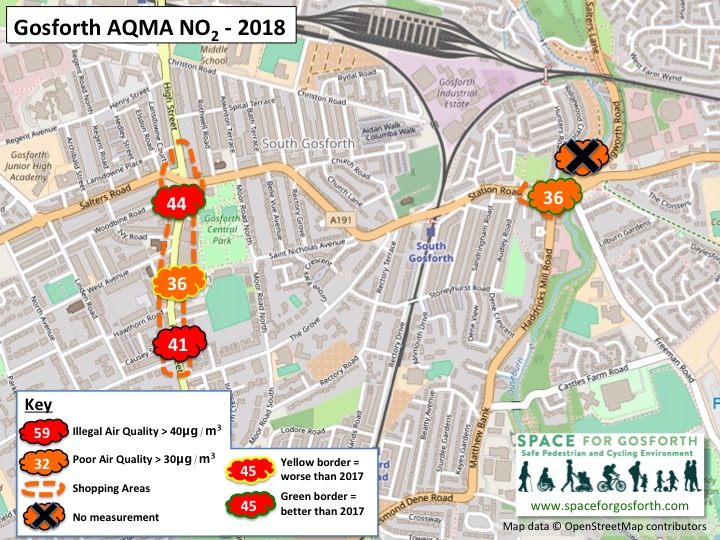 While most monitors in the city centre showed lower readings, at some locations there were substantial increases in measured air pollution.The biggest increases were:

Strawberry Place was added into the proposed Clean Air Zone in the most recent Council consultation.  It is also the subject of a recent planning application for high rise offices and apartments that could create a “street canyon” potentially making air pollution levels even worse in future. 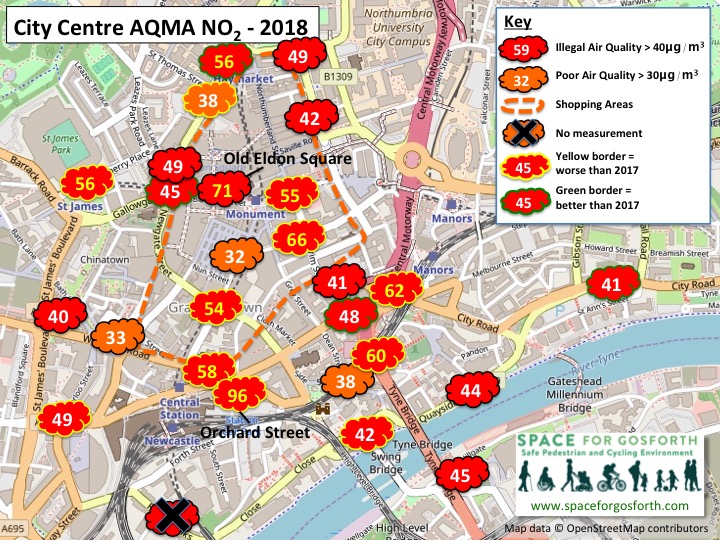 These still weren’t the highest readings in the city centre though, with the highest three readings coming from new monitors.

The worst pollution in Newcastle city centre in 2018

These locations suggest the Council are right to tackle air pollution from buses and taxis, as buses and taxis make up a large proportion of traffic at all these locations. According to the Council’s report, locations with an annual measurement over 60μg/m3 are also considered to be at risk of exceeding the legal hourly maximum of 200μg/m3.

These figures also suggest that city centre taxi and bus drivers could be amongst the most at risk from ill heath due to air pollution. In the SPACE for Gosforth response to the Council’s consultation we proposed a measure [our ref D08] to “Implement a program of air quality monitoring covering the insides of taxis and buses operating in the city centre. [and] Consider providing additional health advice for bus and taxi drivers.”

We also suggested that the Council “Remove through traffic from the Urban Core as per Council Policy UC9, with exemptions for buses” [Reference B08]. In many cities traffic crossing the city centre uses a ring road and it would not be unreasonable for the same to happen in Newcastle, leaving the city centre streets clearer for buses and vehicles accessing city centre destinations.

The Council has talked about removing parking from Grey Street (Cars could be banned from Newcastle’s Grey Street), which was also our proposal B03, although our suggested deadline for that to be implemented has already been missed.

The second highest pollution measurement in 2018, at 84μg/m3, was on The Coast Road at the entrance to Jesmond Park West near The People’s Theatre. The Council’s pollution plan analysis  is that air quality on The Coast Road will be compliant in 2021 and that no additional measures are required. We believe the modelling has come to this conclusion as a result of an assumption that more people will be buying petrol vehicles in future compared to diesels. We also believe this modelling will not have taken into account the high readings by Jesmond Park West as pollution at this location was only measured for the first time in 2018. 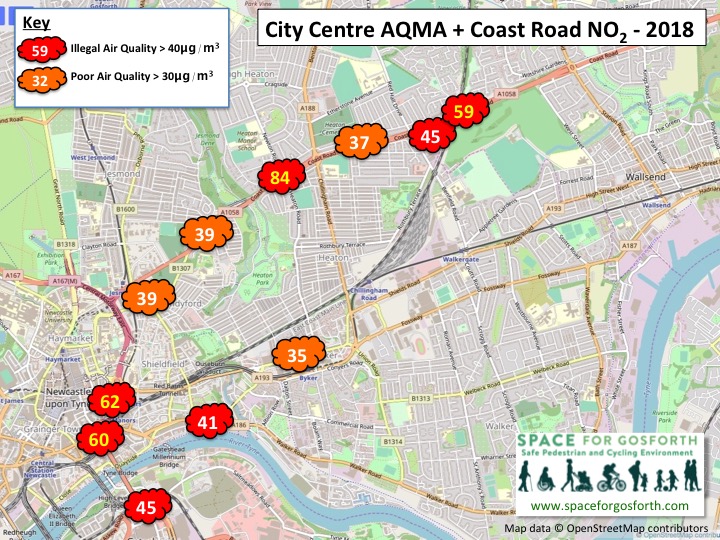 Will the Council’s Pollution Plan be effective?

The Council’s plan is based on a model of traffic flows that forecasts pollution levels. In the air quality modelling report that supports the final plan it gives forecast measurements at a range of locations across Newcastle, North Tyneside and Gateshead.

This is something we hope to look at further in future, but comparing modelled and actual pollution measurements on the Central Motorway suggests actual pollution is still quite a bit higher than forecast. We hope the Council will continue to monitor actual pollution levels to see how this varies from its forecasts and will update its plan accordingly. 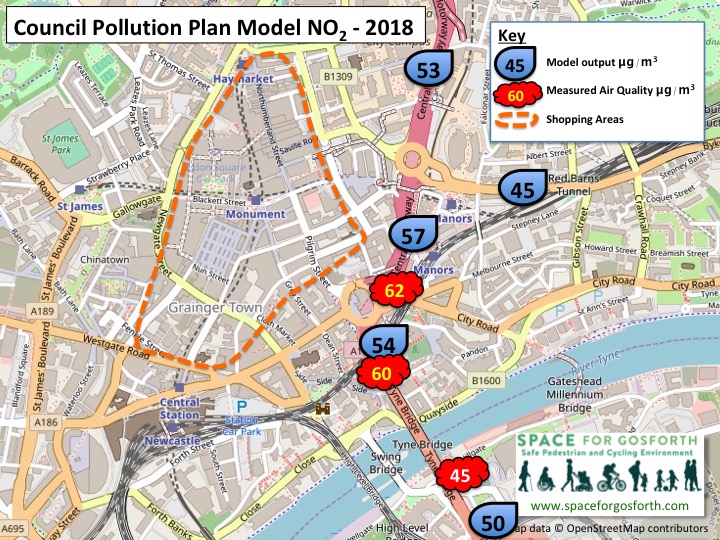 SPACE for Gosforth has previously summarised results for 2017 and 2016.