In our last blog we shared how city transport planners are responding to COVID-19. In this blog we look at how people in Gosforth are using streets differently because of the pandemic and what Newcastle City Council could implement quickly in the short term to support that.

Although our own movements are as restricted as everyone else, we have been able to use the on-line traffic cameras from the Urban Observatory to see how people are using streets in certain locations.

Any intervention by the Council needs assessing against other priorities, of which there are many. For that reason our suggestions have been chosen specifically for being cheap and easy to implement.

An overhaul could be on the wayhttps://t.co/gO8Ov4G4J0

In our blog from January 2016 “Everything wrong with our High Street starts here” we described how we had done a ‘blind walk’ with the help of local Guide Dogs and RNIB groups. This showed very clearly how sections of Gosforth High Street are narrow and cluttered, proving a challenge to those with visual impairments.

Substantially nothing has changed, all the challenges remain the same, except that the lack of space now impacts on all of us.

On Gosforth High Street it’s easy to find examples of people now walking in the road to ‘physically distance’ themselves from others. 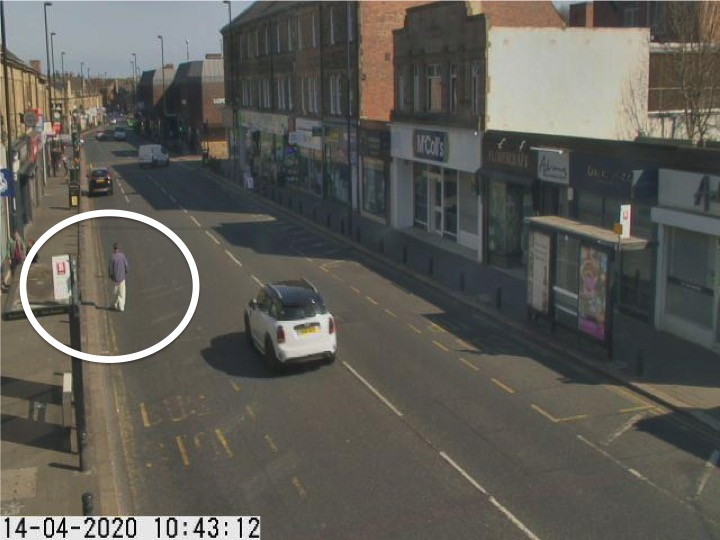 This is actually one of the wider bits of the High Street but passing another person, or two people still requires you to walk on the road. 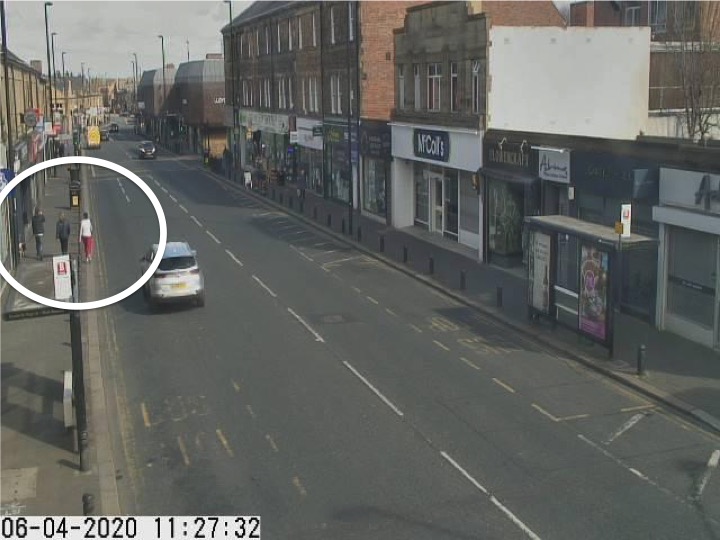 Cashpoints where people are waiting also seem to lead to people walking on or waiting on the road. 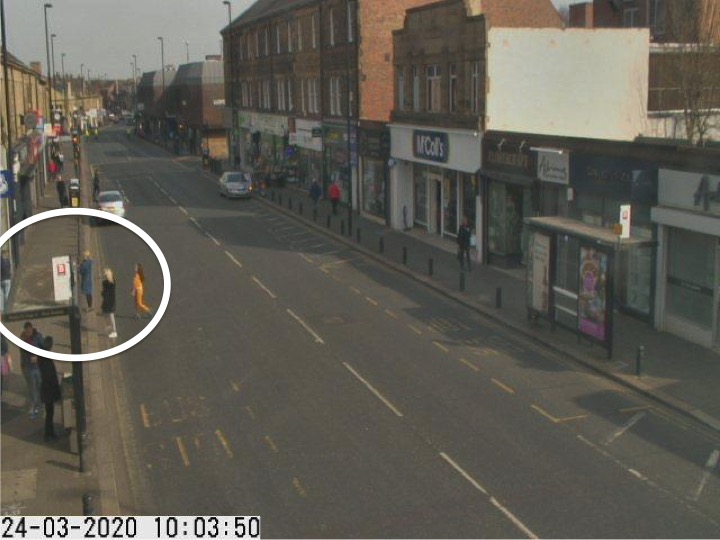 We’re not making a judgement of whether what people are doing is right or not, or if they could have been doing something else. It might be possible to place markers for people to queue along the High Street but that will only work up to a point and people will still have to walk on the road to get past the queue.

We should also remember these photographs are just snapshots in time so we cannot judge how long people were in the road, only that they were for a short period.

Lack of safe space to physically distance is an issue all along Gosforth High Street. The section highlighted below is one of the narrowest and in more normal times is busy with people waiting for buses. 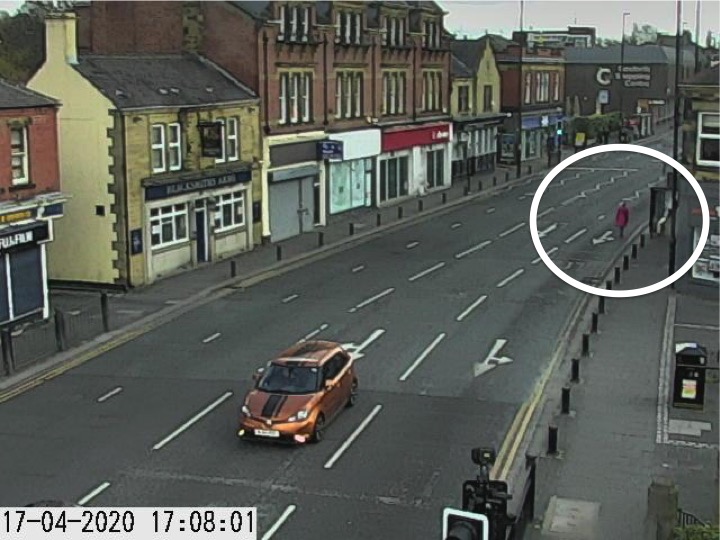 On the other side of the road this is just as much of an issue.

Reallocating space for people to walk outside the former McColls shop would not even require a change to the road layout as it is already hashed out.

The same is true the other side of the bus stop. 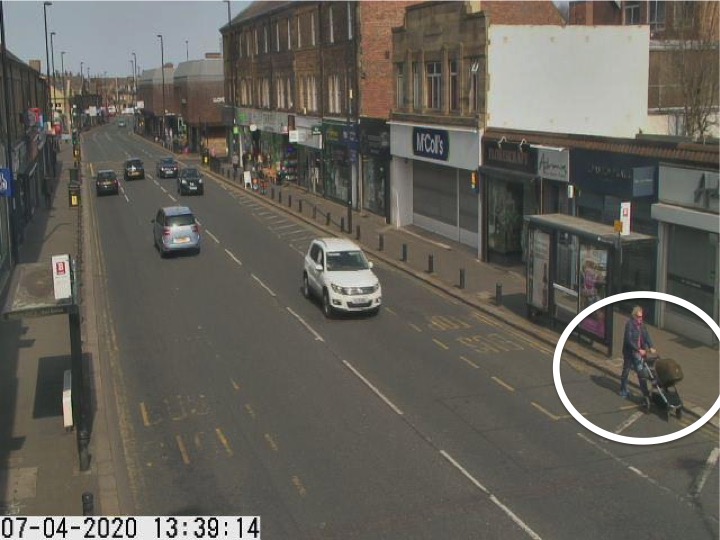 The pictures also back up Council data that shows a substantial drop in traffic levels on Gosforth High Street. We have always argued that the High Street should be one vehicle lane in each direction to give more space for people walking, cycling and shopping. Now we have the additional need to give people more space for physical distancing.

Lower traffic levels combined with a very wide road is also leading to people driving too quickly, putting those using the road to ‘physical distance’ at risk of harm. Those walking on the road themselves are not causing anyone else any harm, and arguably are being responsible citizens by following government guidance.

As well as walking along the road, people also seem to be taking advantage of the reduced traffic levels to cross where they want to, rather than walking to a formal crossing, as seen in the examples below. 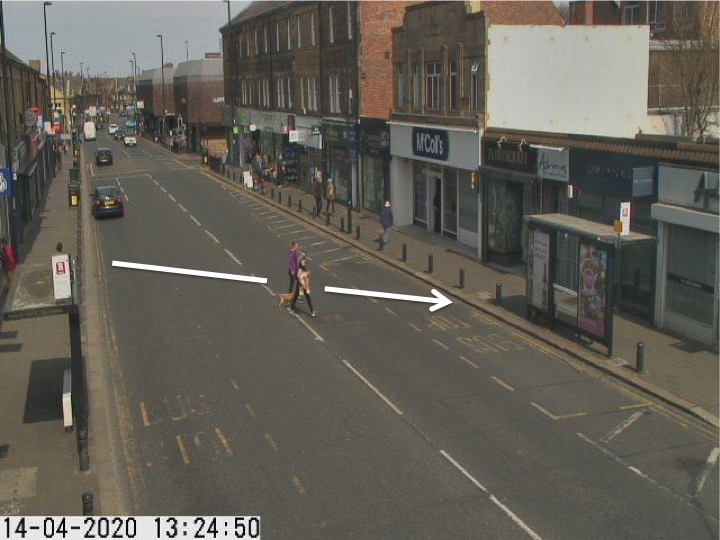 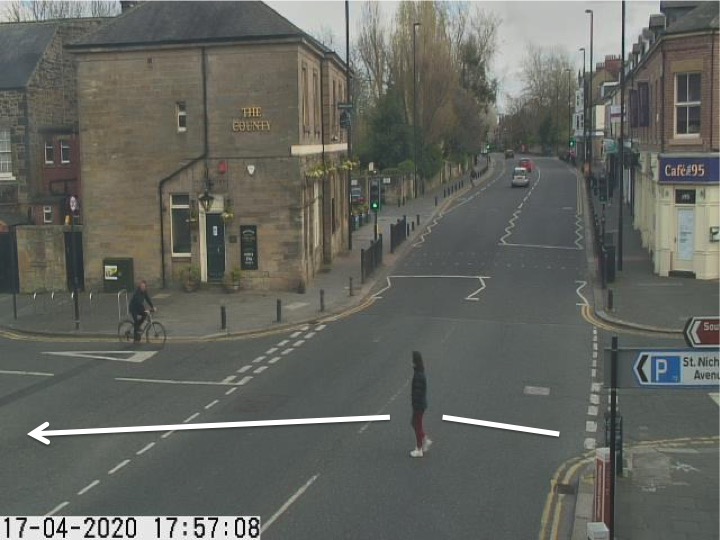 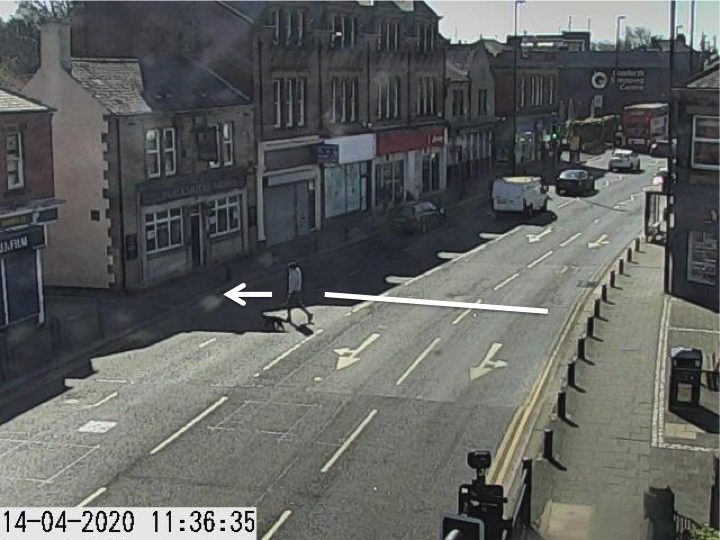 A simple arrangement with a few cones, similar to those shown below from roadworks to replace the crossing lights in April 2017, would quickly and easily add space where people could ‘physical distance’ and could also be used by people cycling. 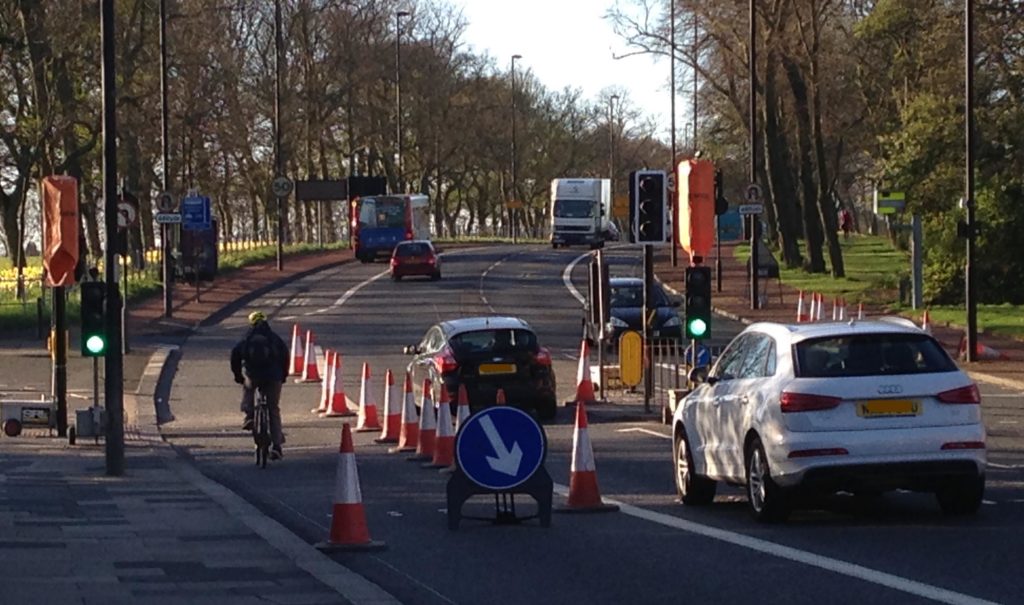 Because the traffic lanes are narrower it would also be easier for people to cross the road. Narrower lanes have been shown as well to lead to a reduction in speeding traffic making the High Street safer for everyone and reducing the risk of collisions or injuries. Implementing the Council’s existing proposals for reduced speed limits on Gosforth High Street and the Great North Road would also help.

Enabling people to cycle safely, doesn’t only help key workers travel to work, but also to keeps pavements clear for people walking. There might be less traffic but the High Street still feels dangerous, not least because of the large number of buses and heavy vehicles. 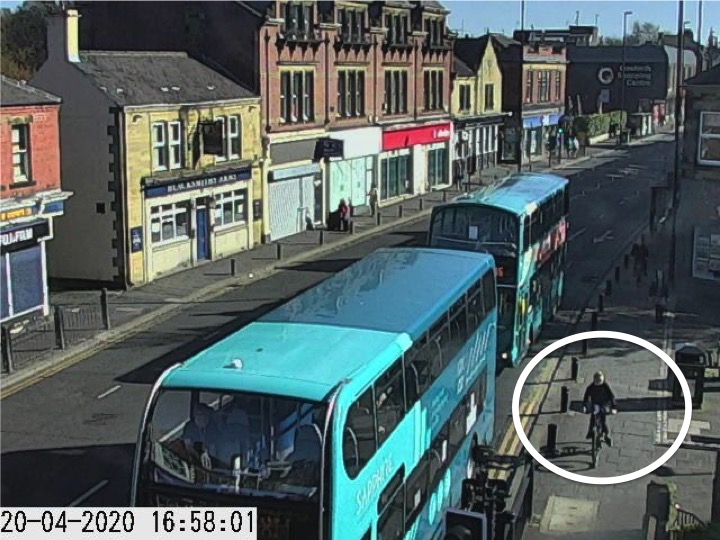 The picture below from Leicester shows just how quick and easy it is to create a ‘Keyworker’s Corridor’ pop-up bike lane.

In our previous blog How are city transport planners responding to COVID-19? we gave examples of what cities around the world are doing in response to COVID-19, to make it easier to walk and cycle to enable key workers to travel safely and create additional options for exercise, which is essential to keep us all fit and healthy.

By the Regent Centre there are a number of pinch points. The pavement on the east side of the road is both narrow and hemmed in by railings, so even if people did want to use the road to ‘physical distance’ they would not be able to do so. 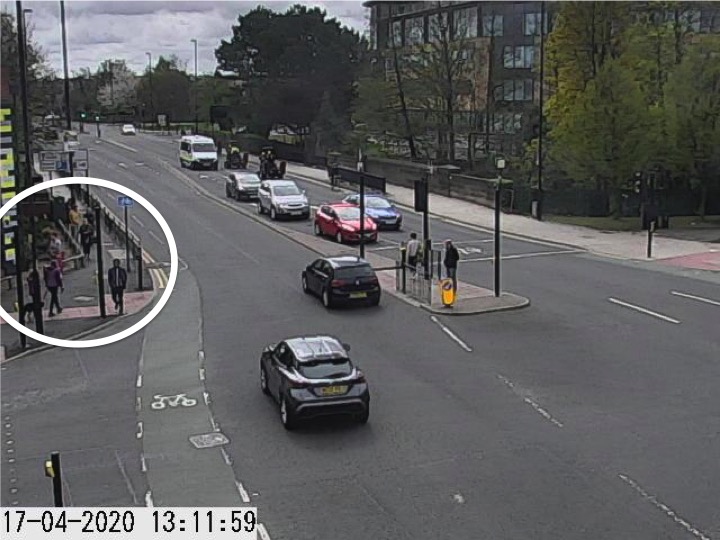 The central island is too small to allow people to ‘physical distance’. This could be fixed simply if the traffic lights were reset to allow people to cross the road in one movement. It would also help to make the sequence automatic so people don’t need to touch the push buttons and to increase the crossing time to allow people to keep their distance while crossing. 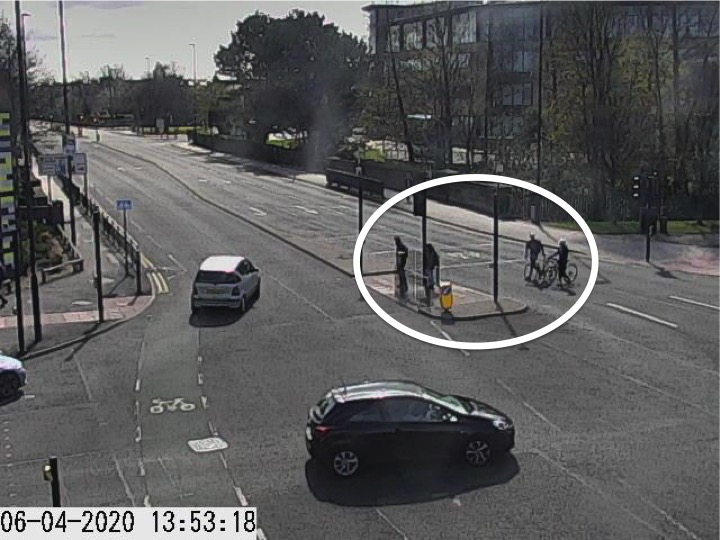 By Marks and Spencers, the combination of a queue for the shop, a bus stop and a busy pavement means people are frequently walking into the road, while traffic levels are still relatively high because Salters Bridge remains open to through traffic. 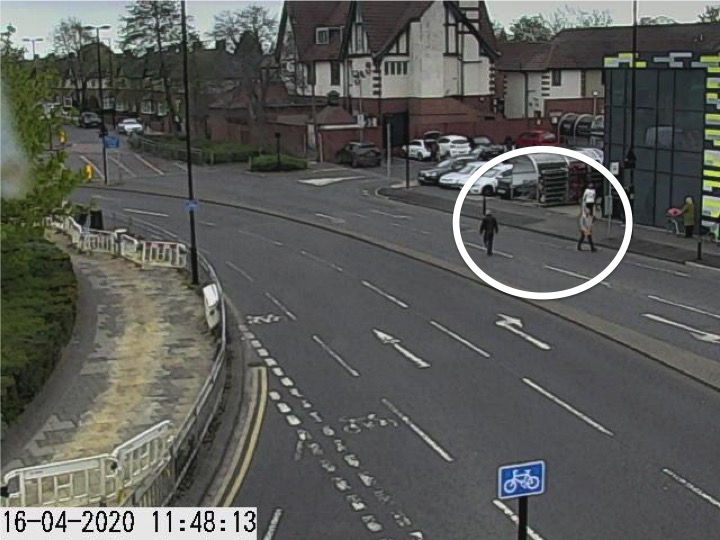 Just as on Gosforth High Street, we’ve also seen people wanting to cross the road where it is convenient to them rather than walking a longer distance to a location determined to be convenient for people driving. 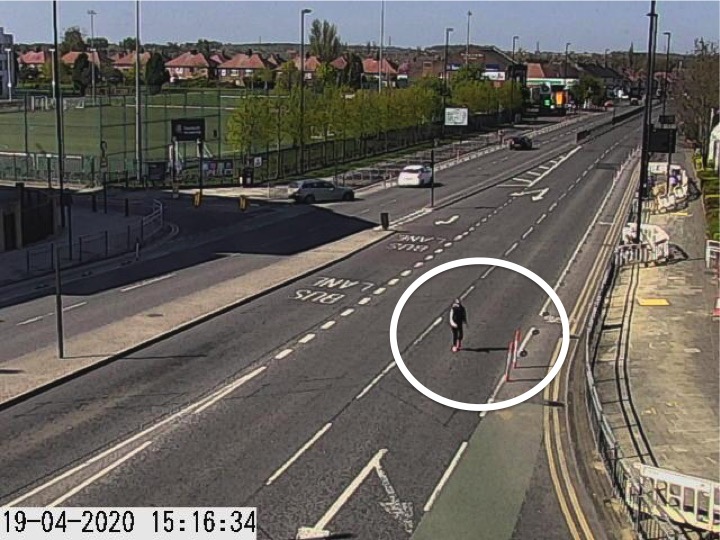 In both pictures, above and below, the railings have created a risk because it is not possible to walk from the road onto the pavement. 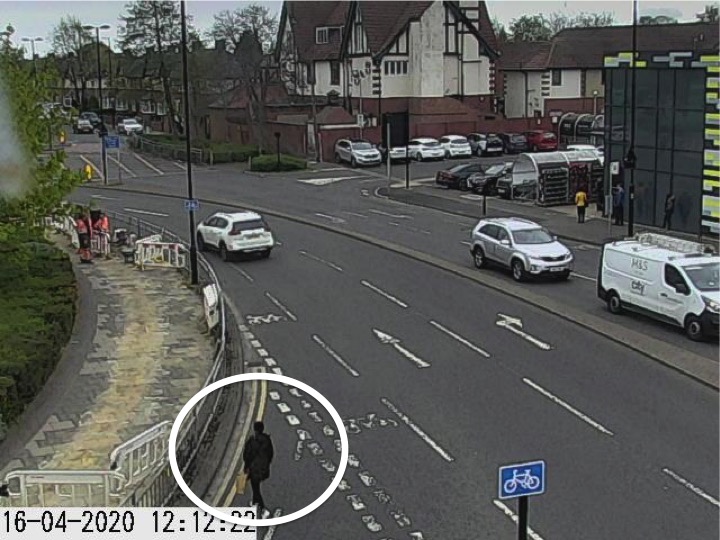 At Haddricks Mill, the junction is only partly built but is being used by people walking to and from work and on their daily exercise.

The key issue here is the size of the ‘sheep pens’ where people are forced to wait for opposing traffic flows in a space where physical distancing isn’t easily possible. These were bad for walking and for cycling under normal circumstances, and even worse now. 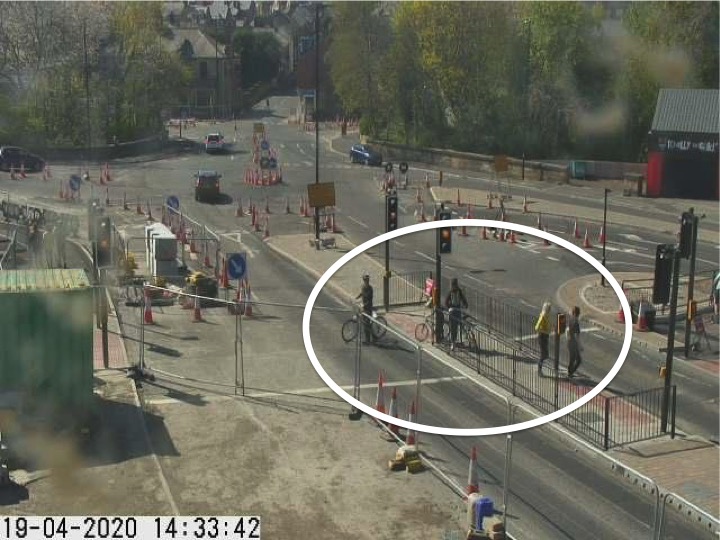 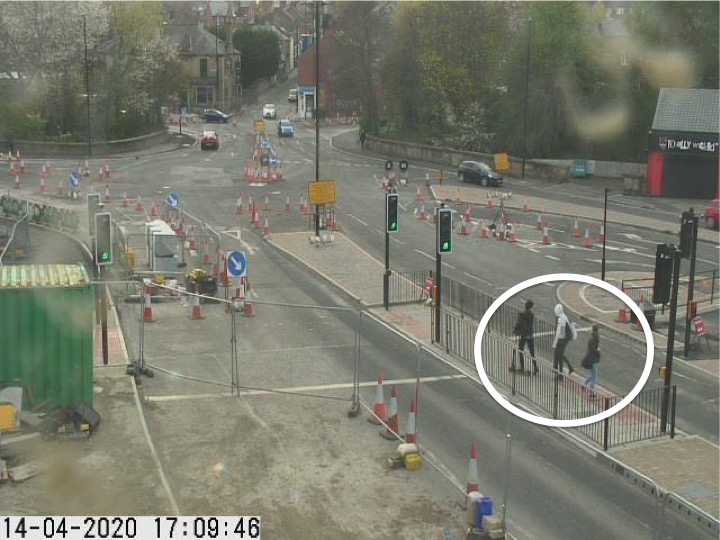 Just like on the High Street and Regent Centre, people will cross where it is convenient for them to do so. In this case also to maintain a distance from the other people crossing. 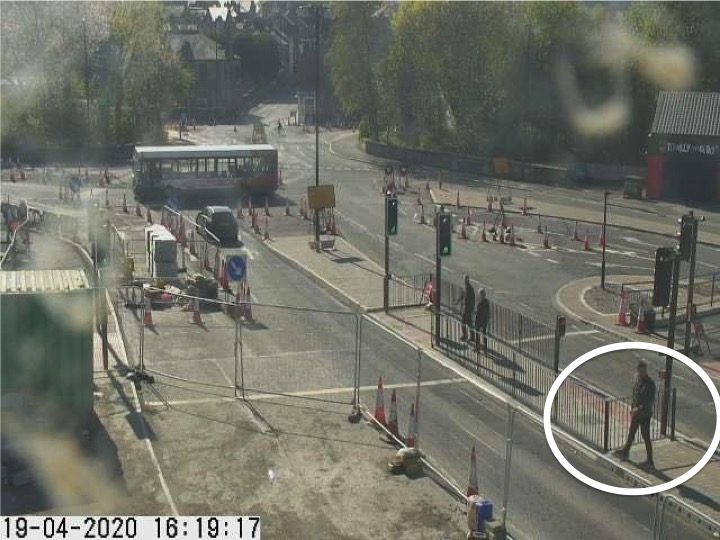 Given the World Health Organisation advice is now, when people need to travel to walk or cycle wherever possible, we hope the Council will take advantage of this pause in work to reconsider its proposal for Haddricks Mill. We have set out our observations and suggestions in two previous blogs: Horrible Haddricks and Horrible Haddricks – part 2.

Traffic cameras are only present on designated key routes for motor traffic but the same is happening all over Gosforth, both on main roads and on local streets. More people are walking and cycling for work or for exercise.

Hollywood Avenue is almost certainly the worst of the local streets for still having high volumes of speeding traffic conflicting with people, including children, who need to be out on foot or travelling to the Freeman. The Council have a ready made, cheap and proven solution to this problem.

Just a tiny illustration of what’s going on in our residential street. Lovely weather but as unsafe as ever. pic.twitter.com/GW31kyHxJ7

Without taking steps to create more safe space, busy routes will be come difficult to use and existing safe routes like the Town Moor and the bridleway east of Melton Park risk being overcrowded.

The Town Moor, as well as being used for leisure, is a main route for people walking and cycling to the RVI. Creating some alternative safe routes, such as via Grandstand Road, would help.

Local residential streets are currently relatively quiet, but this may not last once restrictions ease if the Council does not intervene, especially if government guidance remains to avoid public transport. We set out an example of what might be possible for the streets east of Gosforth High Street in our blog East Gosforth – Streets for People.

If you have any other examples of streets in or around Gosforth that could be made better or safer for people to maintain physical distancing, please let us know via the comments below.

Bikes certainly are the new toilet paper! We're struggling to keep pace with demand, please bear with us! Unlike other bike shops we can't order more stock, all of our bikes are donated and then fully refurbished, a process which takes time. https://t.co/jPsXpt8EgM