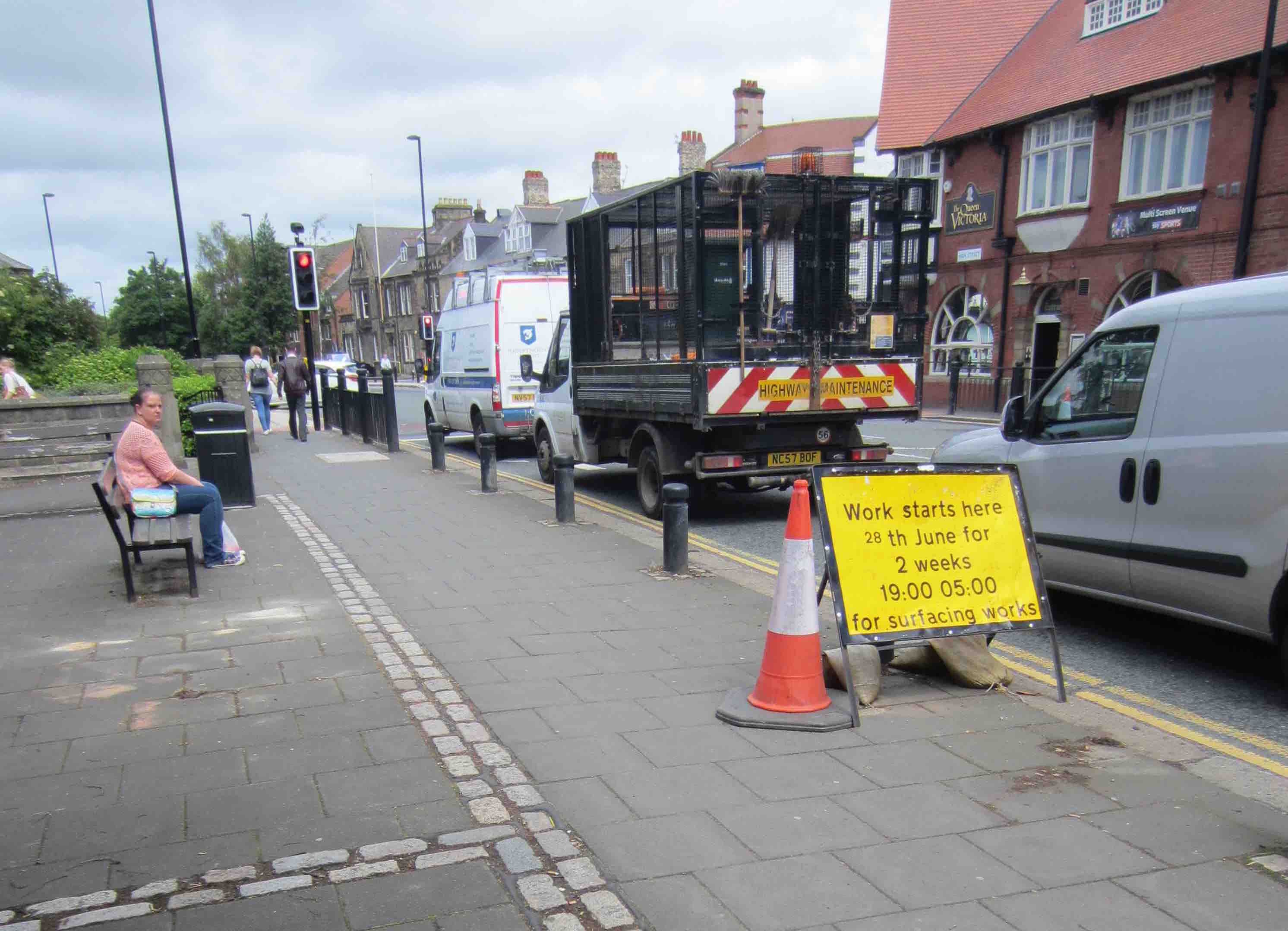 New proposals for Gosforth High Street have been released  by Newcastle City Council today. These proposals include pedestrian-priority crossings on side streets, revised parking arrangements and a reduced speed limit.

While the ‘Red Route’ plans are still officially on the table, the Council has agreed to work with SPACE for Gosforth and local business owners to see if alternative approaches can be found that address issues such as the High Street’s poor safety record, air quality and traffic congestion, and which will help make Gosforth High Street an attractive and vibrant destination that people want to visit.

The proposals released today, which we describe below, are the first step in this process. The proposals have been released for ‘technical consultation’ which means any feedback needs to be submitted to the Council to be considered, but we would like to know what you think as well.

We have included links to the plans and press release at the end of the article.

Raised crossings will be familiar to most people who use the High Street, in particular the raised crossing at the end of Ivy Road opposite Sainsbury’s. This allows people to cross the street without having to go up or down at a kerb, which is easier for people with wheelchairs or buggies. The crossing also acts as a speed bump to slow turning traffic. 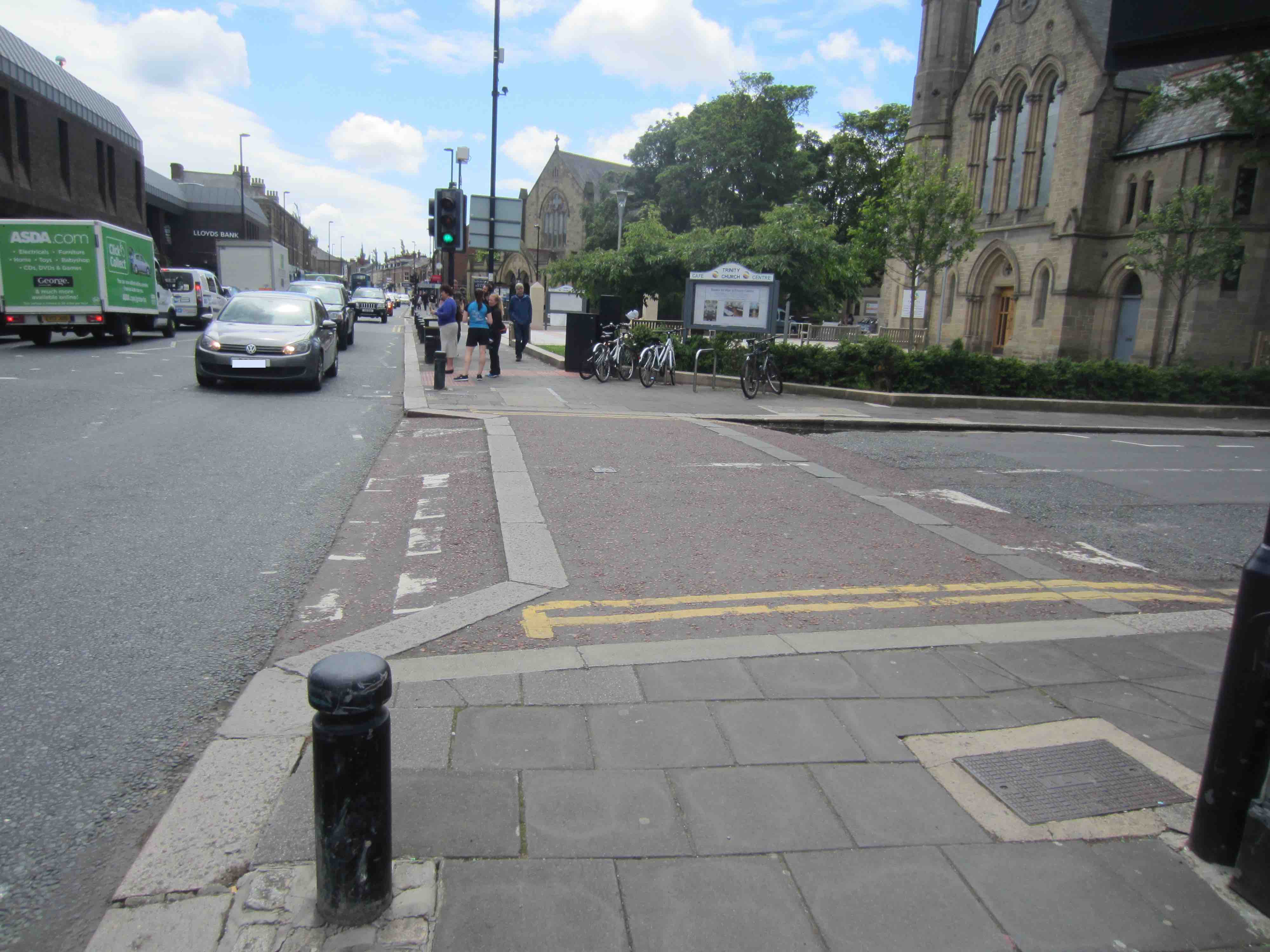 While Ivy Road is a raised pedestrian crossing it does not, unlike Causey Street further south, appear to give priority to pedestrians. The indented kerbline directs drivers into Ivy Road, while the presence of road markings right at the junction and the double yellow lines running through the crossing both indicate a road rather than a place where pedestrians have priority.

In contrast, at the crossing of Causey Street the kerb line continues in line with the pavement and road markings do not enter the pedestrian area, indicating to drivers that pedestrians should have priority at this crossing. 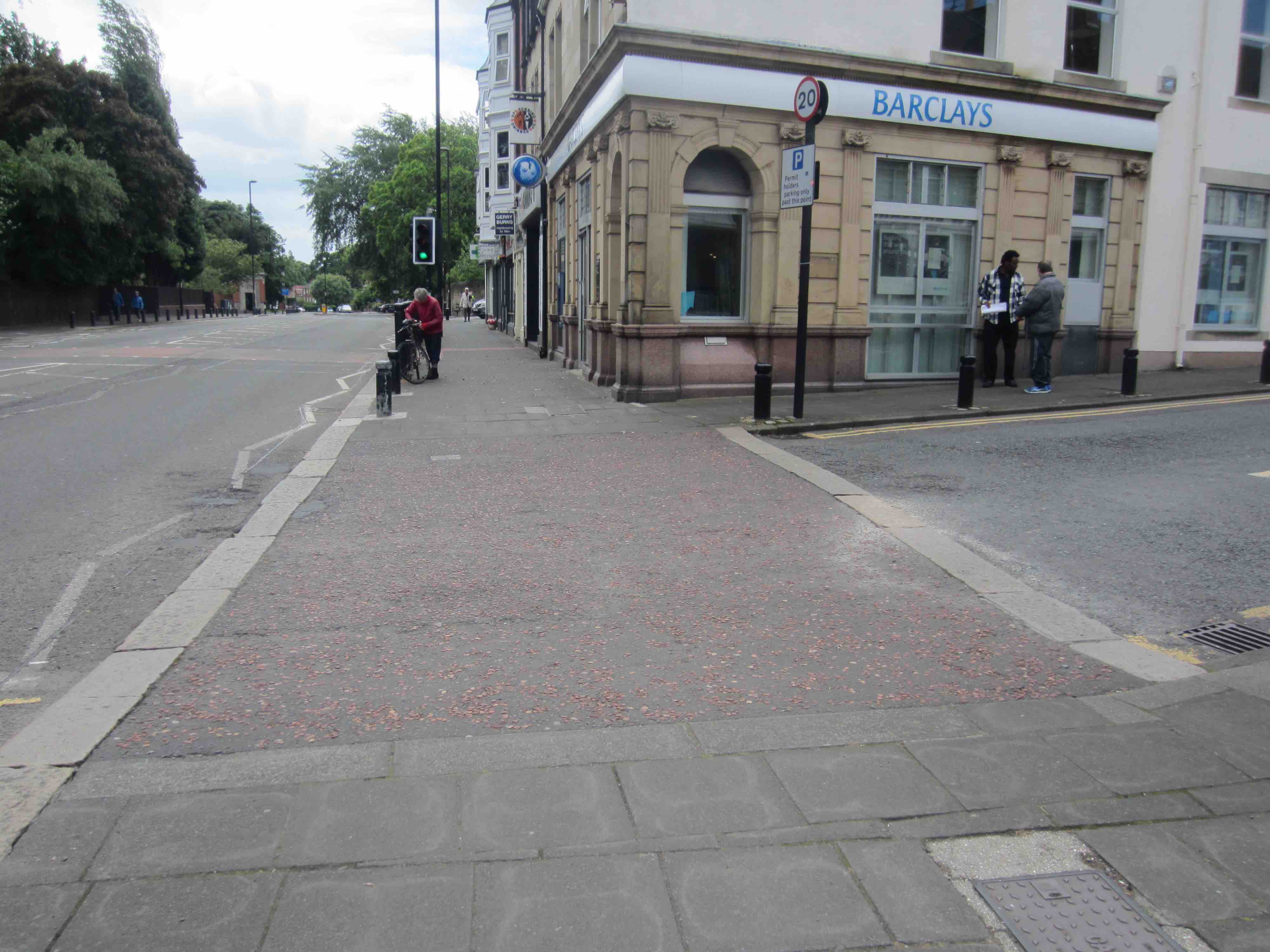 On the other side of the High Street there are some existing pedestrian priority crossings that you might not even have realised are crossings.

Just next to The County is the entrance to Roseworth Terrace. It should be clear to any driver here that when they cross the pavement they need to give way to pedestrians, just as if they were exiting their own drive at home. 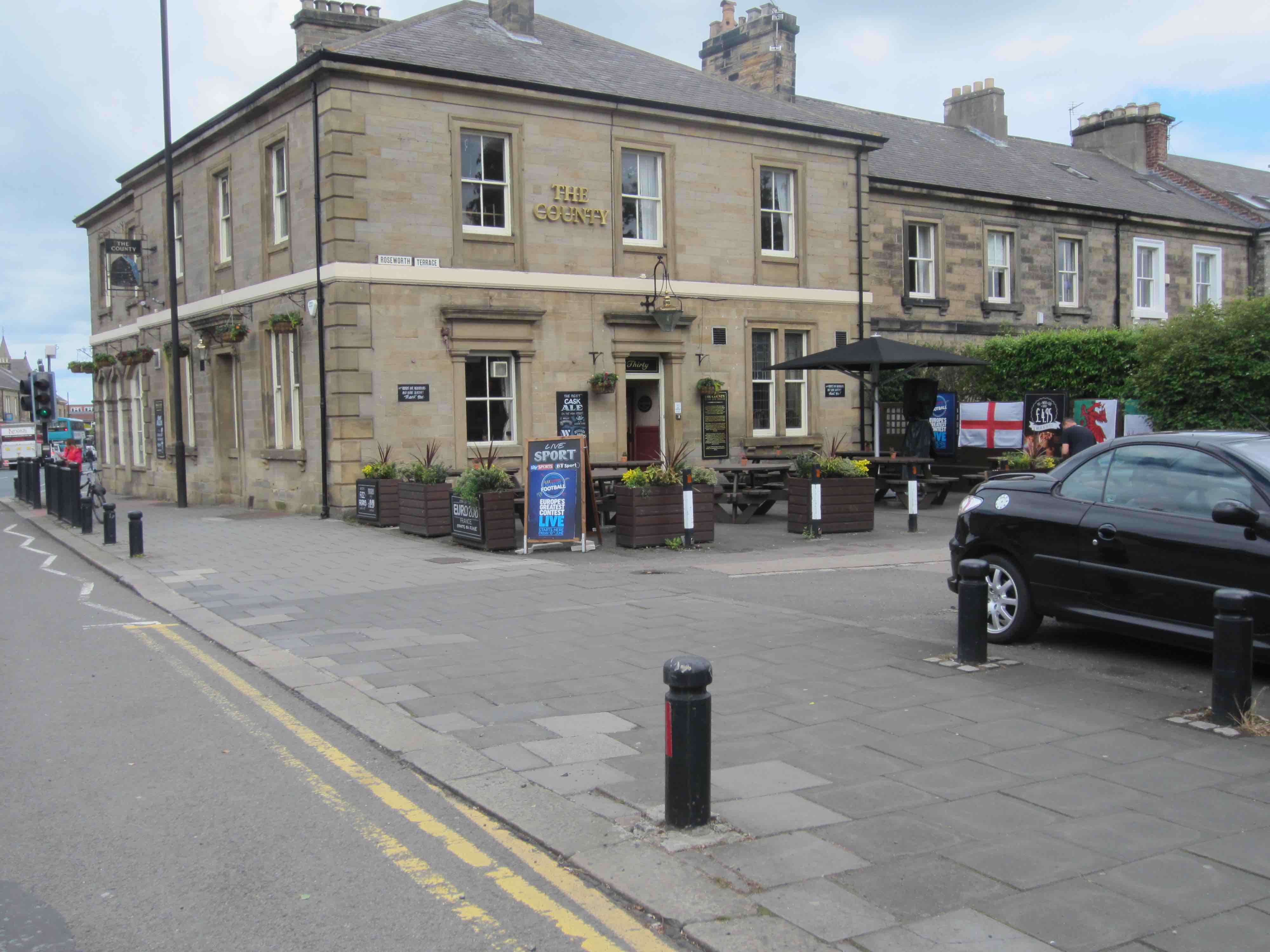 The entrance to Roseworth Terrace, next to The County

At the north end of the High Street is another entrance, to the Gosforth Memorial Medical Centre, that again has continuous pavement. 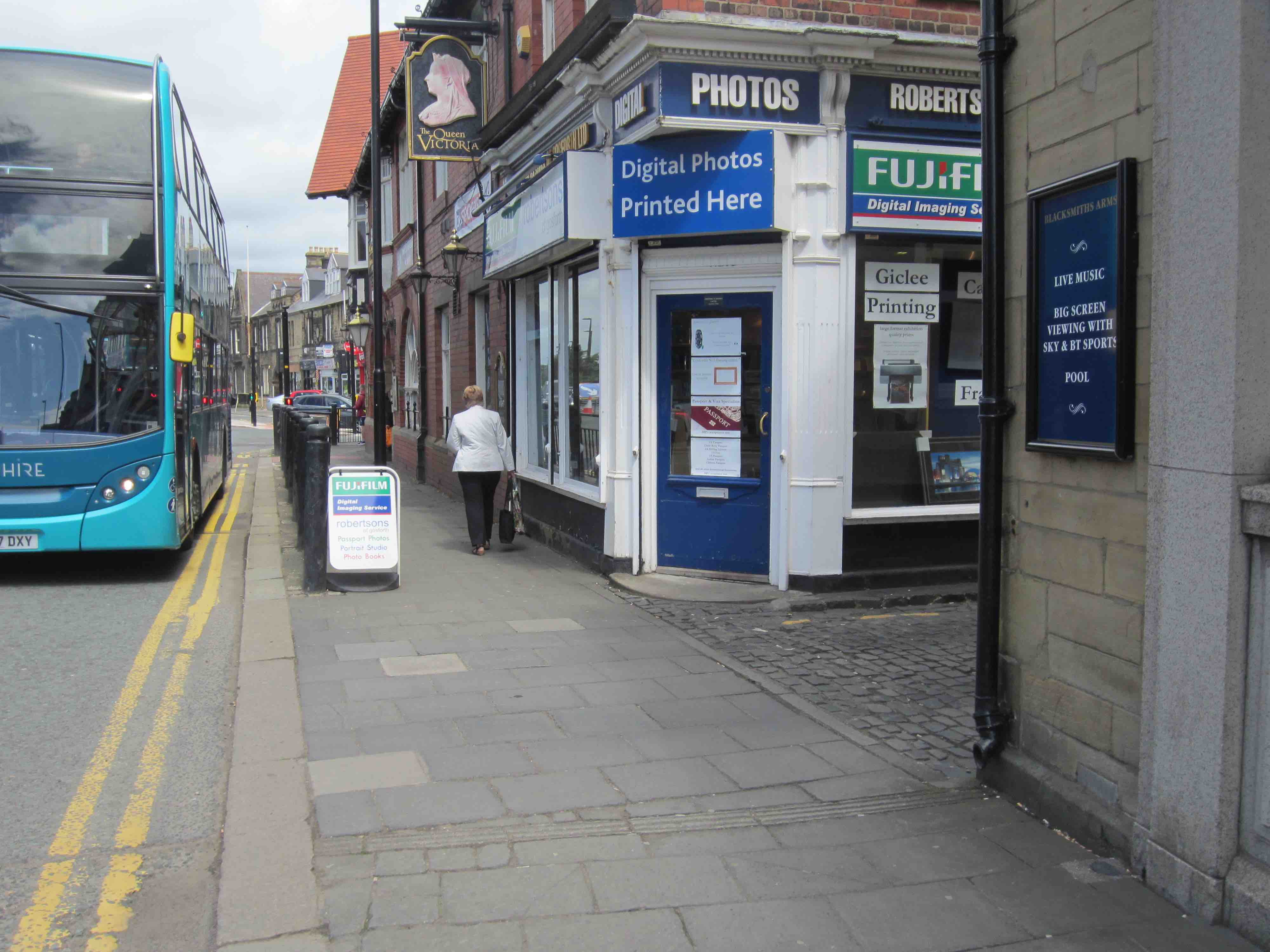 You can also see this design of crossing where Back Grove Avenue meets the High Street just opposite Elmfield Road. 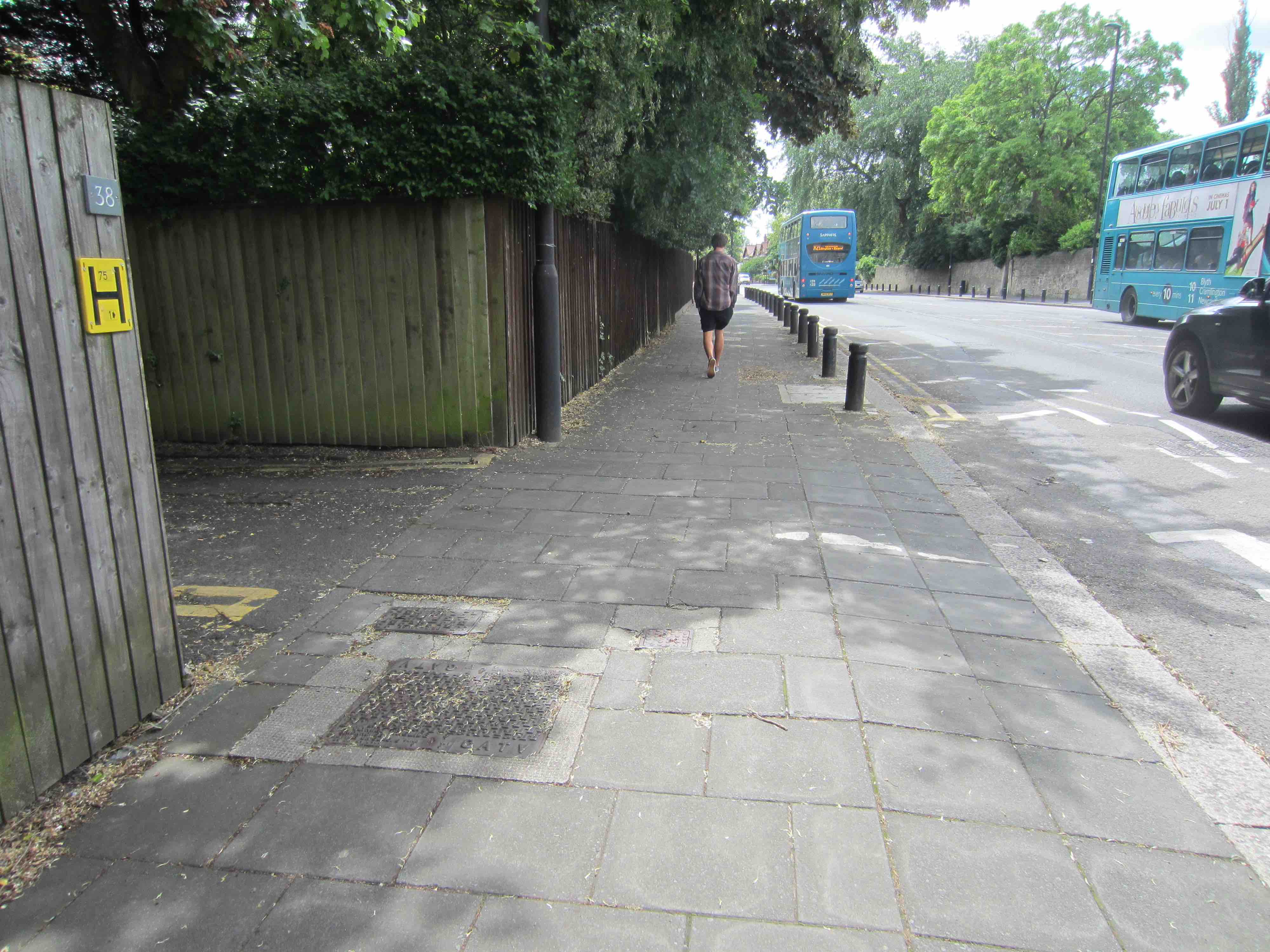 The proposal includes new pedestrian-priority crossings at Elsdon Road, High Street Back, West Avenue, Hawthorn Road, Elmfield Road, The Grove, Graham Park Road, The Poplars, The Drive and Moor Crescent as well as at the entrances to the Salters Road and St Nicholas Avenue car parks.

Although we have information on road traffic casualties for these junctions, we are still interested to know your experience of using these crossings. Do you feel safe? Where have vehicles given way to allow you to cross? Would more of these crossings help make the High Street more pedestrian-friendly?

There is one further option that is not included in the current proposal. That is the junction between the High Street and Woodbine Road where through traffic has been removed and pedestrians have complete priority. 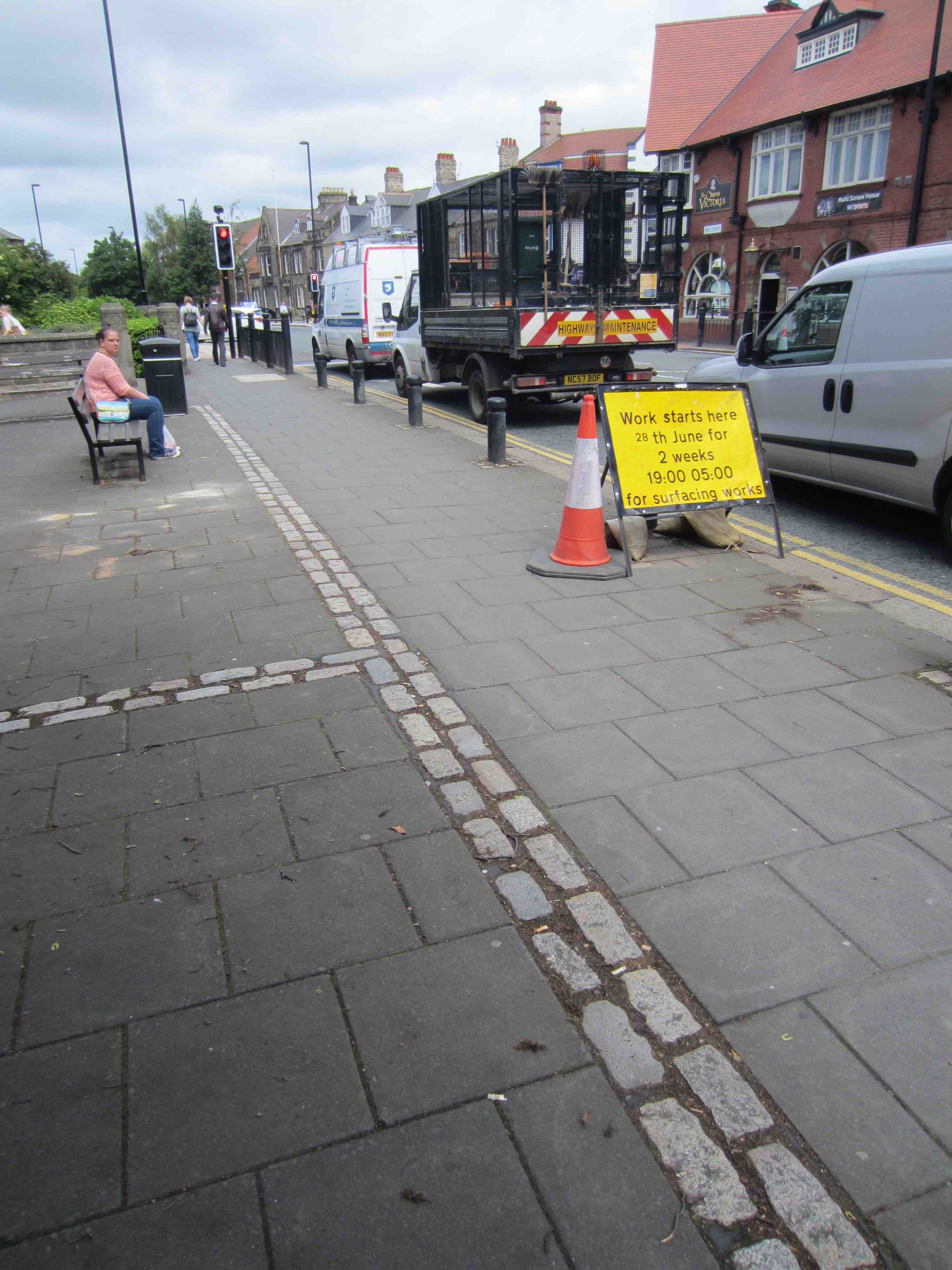 Another important factor for pedestrian comfort and safety is the width of the crossing. Having a wide ‘splay’ at the end of the street means the street takes longer to cross, leaving a pedestrian vulnerable for longer, while also allowing cars to maintain a higher speed when turning, making any injuries sustained in a collision more serious.

Narrowing the street ends reduces the time people need to cross, improves visibility and reduces the speed of turning vehicles. All these make it safer for pedestrians by making it less likely that a pedestrian would be hit by a vehicle and by reducing the likely severity of any injury if they are.

The roads where narrowed entries are proposed are The Drive, The Poplars, Graham Park Road, The Grove and the entrance to the St. Nicholas Avenue car park.

If you look at Causey Street and Ivy Road you will notice that the splay is very small – the width of these streets where they meet the High Street is virtually the same as the width further along the road. 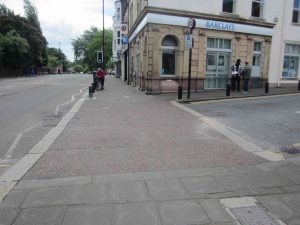 Compare this to The Drive where there is a large cut out on the South side that currently forces pedestrians to cross away from the normal desire line / most direct route. 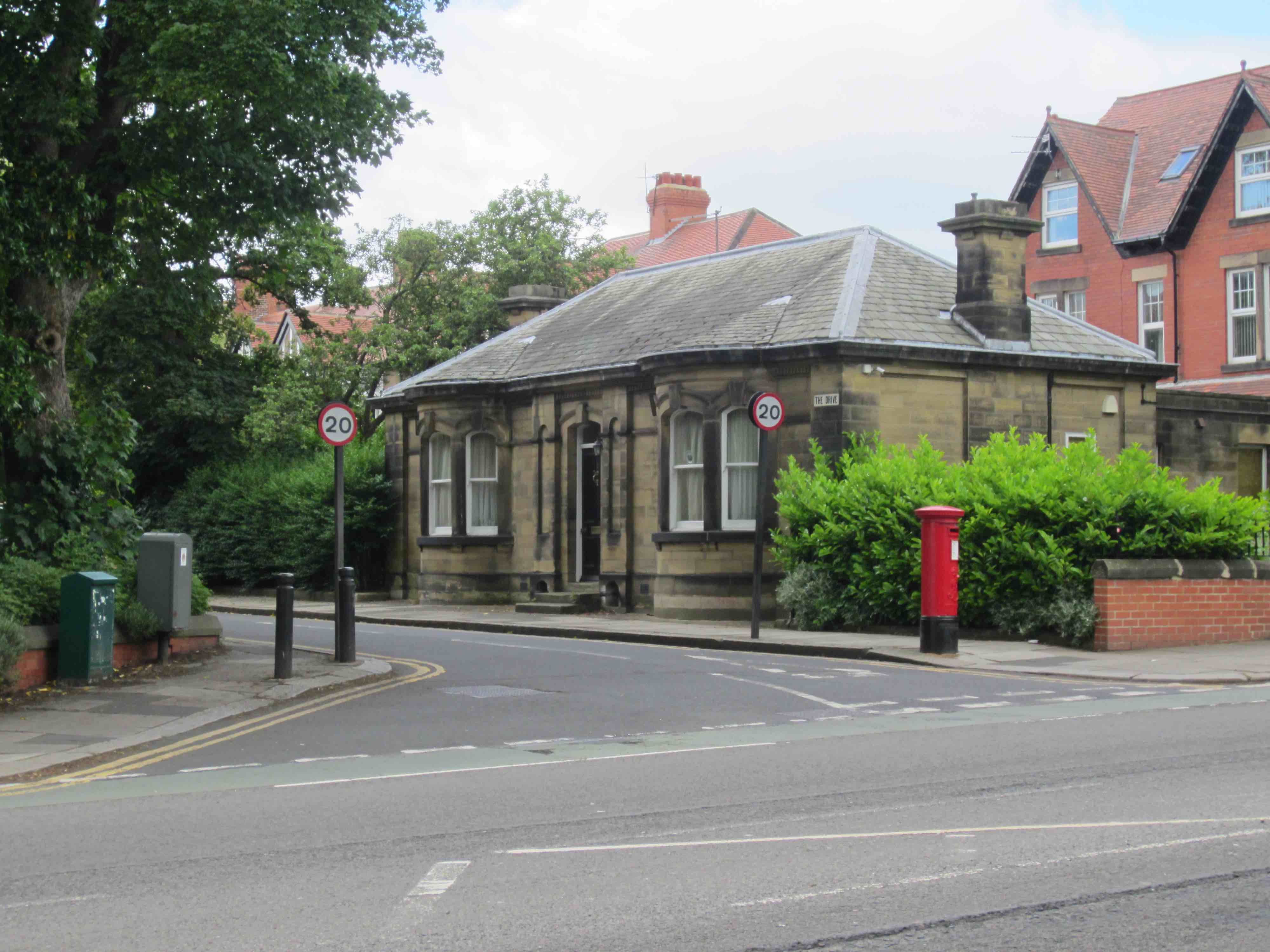 At Graham Park Road the splay makes it harder for people wanting to cross to see approaching vehicles. Walking in the direction shown in the photograph below, you have to walk to the bollard on the right of the picture before it is possible to see vehicles approaching from Graham Park Road. At that point, it is harder to see vehicles that might be turning from the High Street. This also means that despite having a raised crossing most people do not use it. 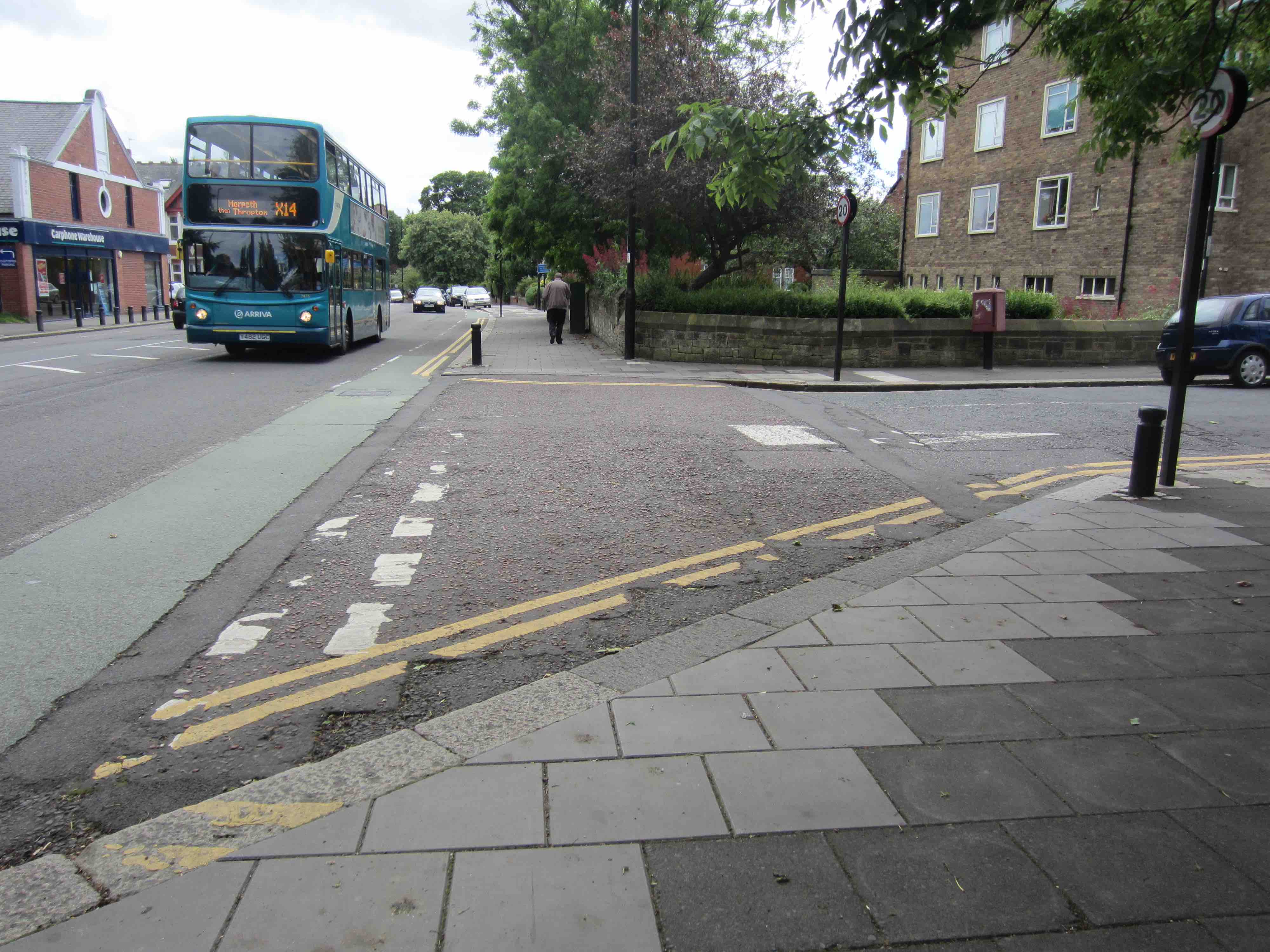 At The Poplars, the current crossing is almost twice as wide as the width of the road. 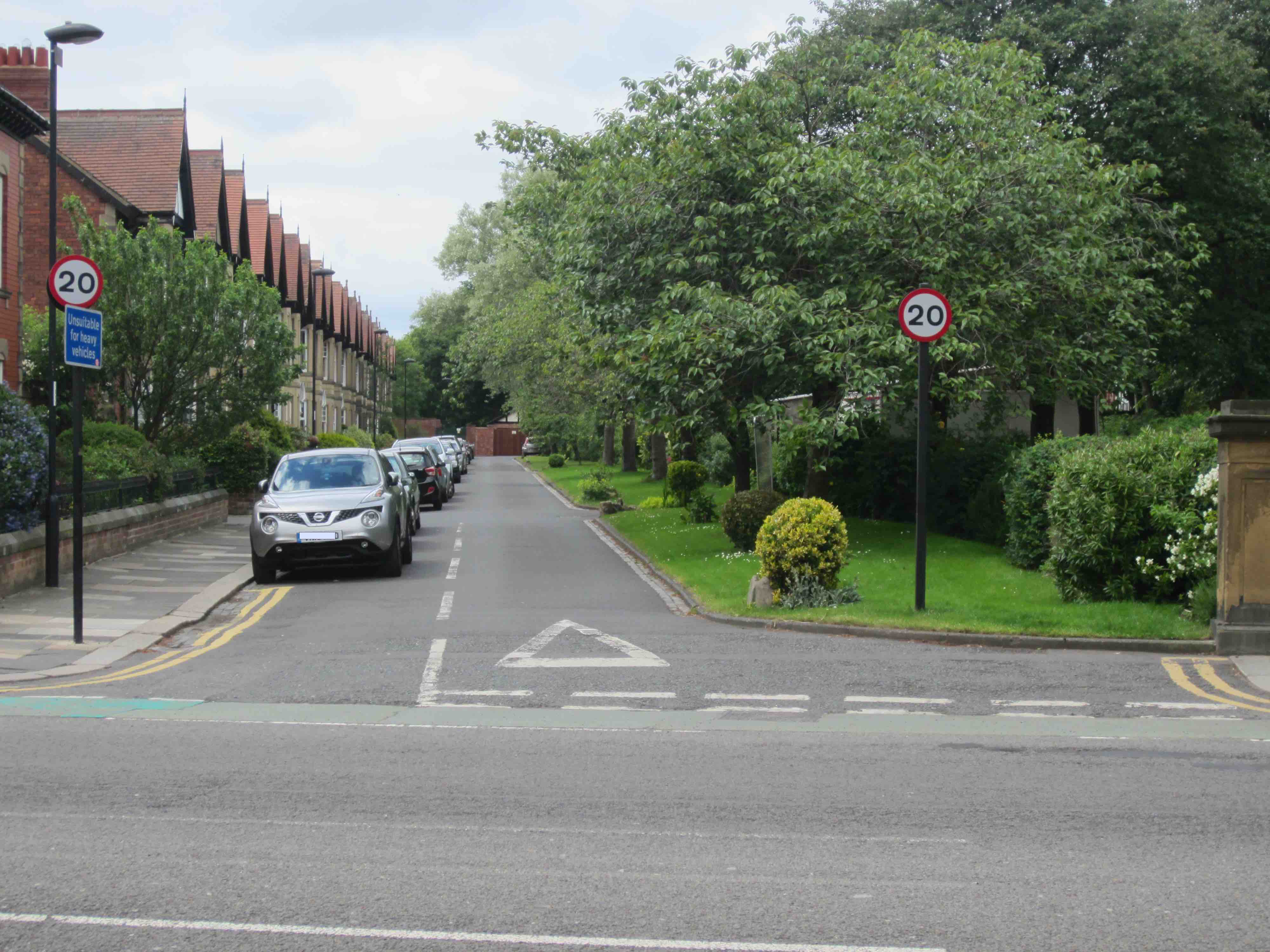 It is worth noting that even with a narrowed entry it will still be possible for bin lorries and other larger vehicles that need to access these streets to do so, though in some cases they may need to make a wider turn.

Another part of the proposal is to relocate the Elmfield Road Cycle Bypass (pictured below). The current location has the cycle route crossing exactly the same space as where pedestrians wait to cross Elmfield Road. Moving this slightly further away from the corner will remove this conflict while still allowing cyclists to turn into this road from the south. 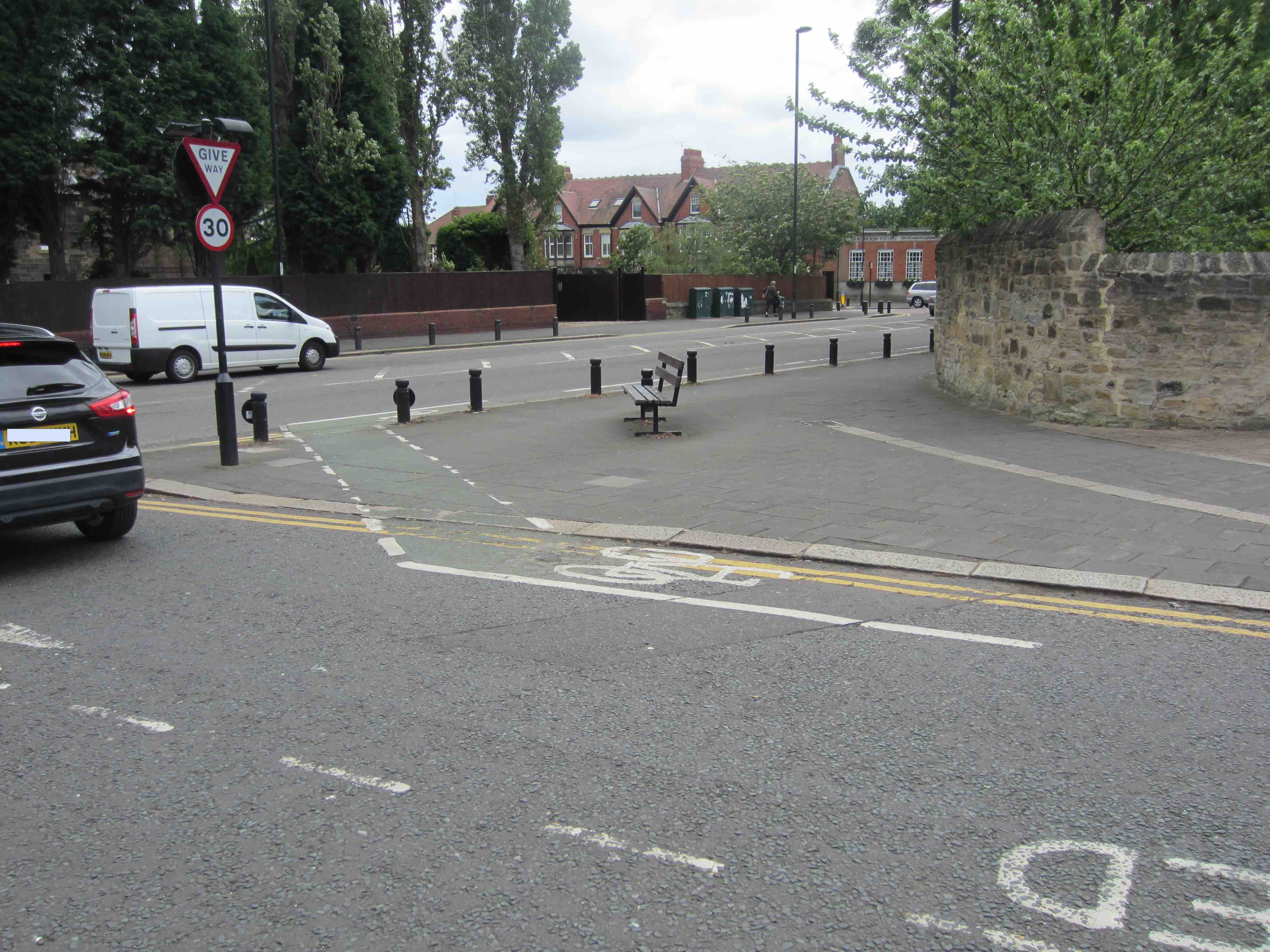 Whilst SPACE for Gosforth has some concerns about allocating additional parking spaces in residential streets and the potential for some extra traffic on those streets as a result, we understand that these proposals will have a much reduced impact compared to the changes approved with the Red Route scheme. We hope that the residents of the streets involved will engage with this consultation to share their view on these proposals. 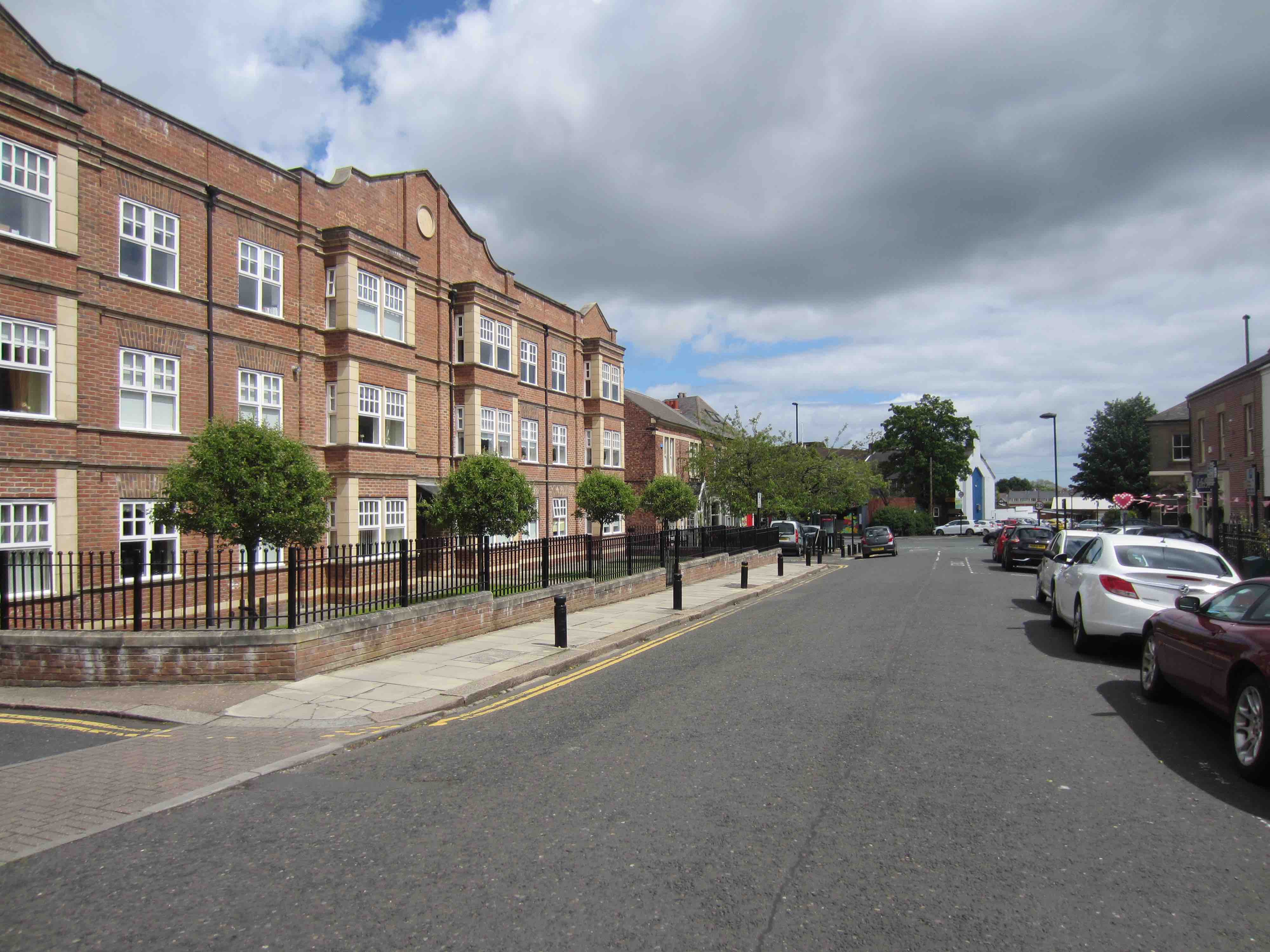 On West Avenue the yellow line pictured on the left below will be replaced by residents parking and a number of residents’ spaces at the end of the street nearest the High Street will be rebadged as 2 hours only (currently these spaces can be used by residents as well as shoppers). 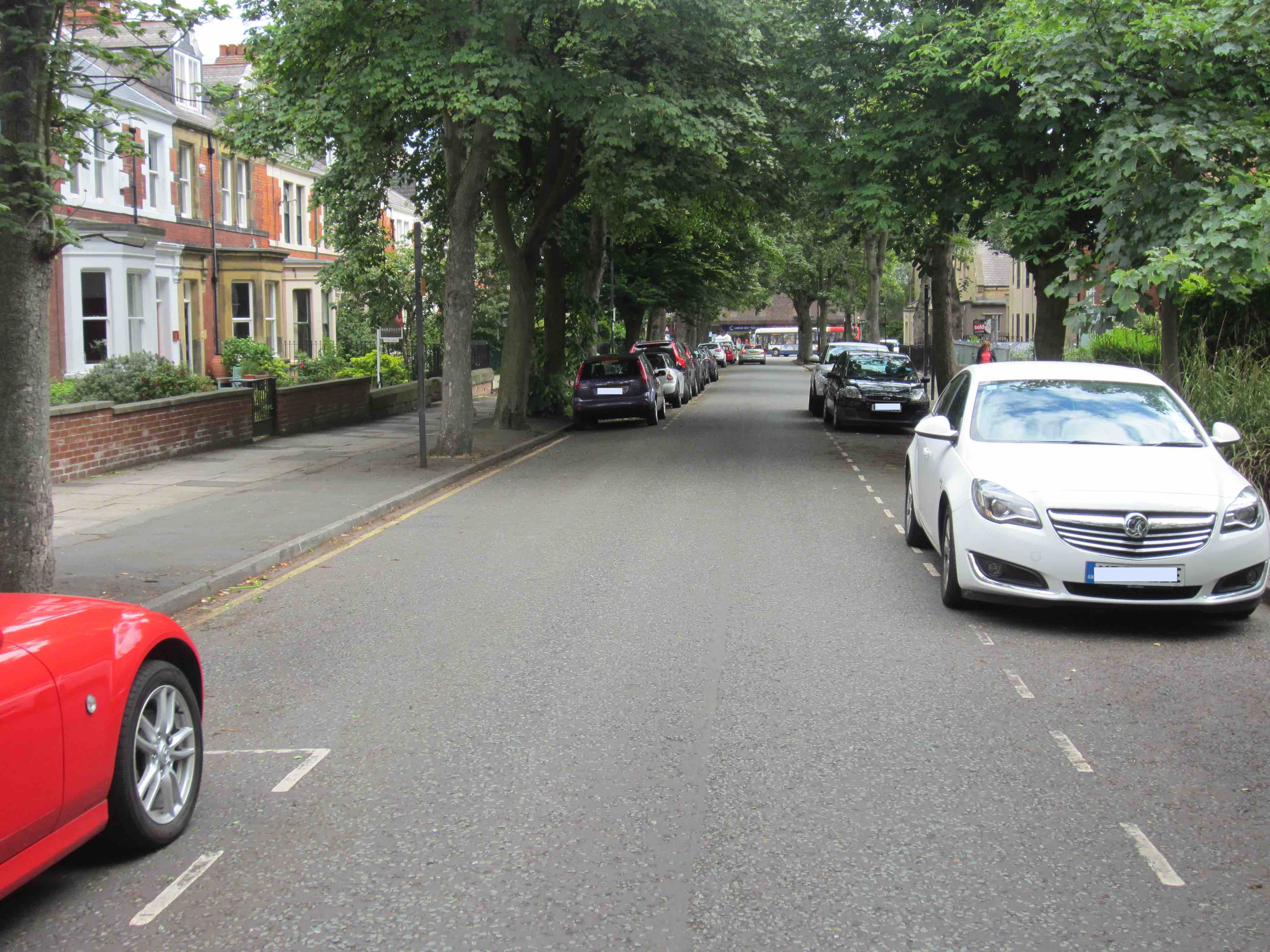 On Woodbine Road some of the yellow line next to the Old Chapel will be replaced by parking spaces. 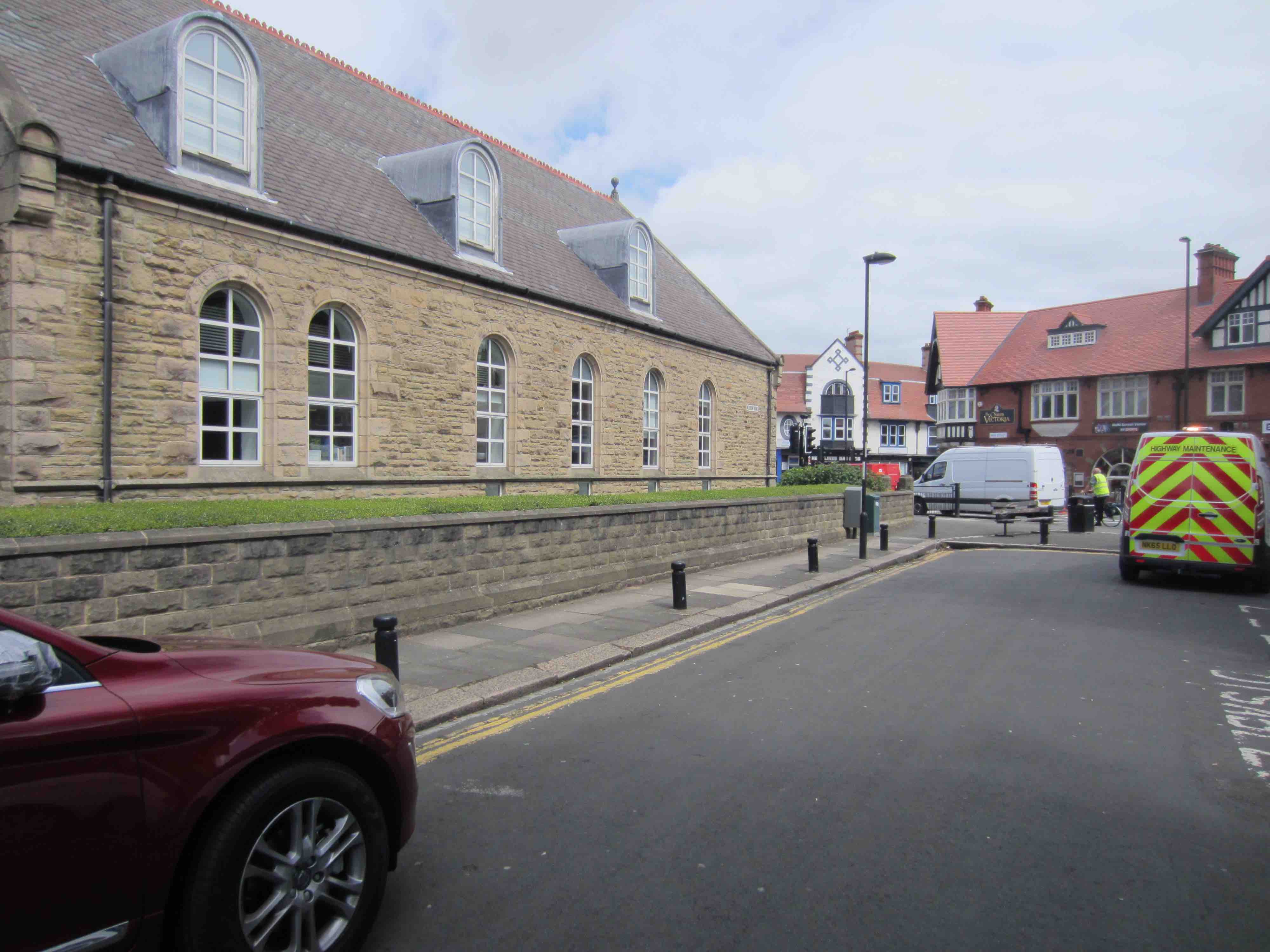 Woodbine Road, by the Old Chapel

If you wish to respond on the parking changes you may wish to consider who the parking is for (shoppers, residents, disabled, loading for businesses etc.), what the waiting restrictions are (e.g. 30 minutes, 1 hour, 2 hours), when those restrictions apply and whether the spaces should be free or a parking charge applied. These parameters will guide the use of the spaces, with shorter waiting and/or higher prices likely to lead to more vehicles being able to use the spaces on any given day, but each for a shorter period.

SPACE for Gosforth previously completed a parking survey of spaces near Gosforth High Street in which we counted 1,482 spaces within a short walk of the High Street.

A separate proposal on speed limits along the entire length of Great North Road, from the city centre to the A1, has also been released. This will include a 20mph speed limit on Gosforth High Street between The Grove and Salters Road.

As we set out in our post 20 mph – the right speed for Gosforth’s children, speed is the key factor both in the likelihood of impact and the consequences if the worst does happen, and that if the speed of impact in a collision involving a pedestrian is reduced by 10mph, the chance of being killed or seriously injured is halved.

Commenting on the Proposals

You can see the proposals described here. The Council have also issues a press release.

You can comment on these plans by writing to gosforthti@newcastle.gov.uk. It is just as important to write in if you support these plans as if you have suggestions for how they may be improved. To be sure that your comments are considered you should submit them prior to 25 July 2016.

We would like to thank the Council for supporting this approach, Councillor Nick Cott for helping to get the different groups together and Duncan Young, Peter Thorpe and the other High Street traders for also agreeing to give up their time to be part of the discussions.