SPACE for Gosforth has produced some air pollution banners for local schools for Clean Air Day 2019.

Air pollution is a serious issue in Gosforth due to high volumes of traffic travelling through Gosforth High Street and Haddricks Mill junction.

Children aren’t responsible for this pollution but they are affected by it, not just when travelling by car or on main roads, but also outside schools and in car parks where there are lots of vehicles in a small area.

As adults, and as parents, this is something we can do something about. No one wants their children to be breathing in dirty air from other people’s exhaust fumes.

If you have just seen one of the banners and want to find out more, you’ll find more information below, including links to data sources.

If you want to know more about the health risks of air pollution and what you, the Government and Newcastle City Council can do about it, please also read on.

1. What’s the problem with school traffic and air pollution?

According to the Department for Transport, school traffic makes up one in four vehicles on the road at peak times. And yet children are amongst the most likely to be made ill by air pollution.

According to the British Lung Foundation “Children are more vulnerable to breathing in polluted air than adults. For their size, they breathe more air each minute than an adult. Buggies and prams put them at the level of car exhausts.“

The Royal College of Physicians estimate that in the UK 40,000 deaths a year are linked to air pollution and that air pollution impacts the development of unborn children with additional risk of miscarriage, is linked to asthma, diabetes, dementia, obesity and cancer, and increases the risk of heart attacks and strokes for those in later life.

Children who are taken to school by car will also be exposed to more air pollution than children who walk or cycle, even if they walk or cycle on the same polluted streets. This is because pollution from vehicle exhaust fumes is more concentrated in the middle of the road. According to the Governement’s Air Quality Plan, vehicles are responsible for 80% of roadside air pollution.

2. What is the Government doing about air pollution?

Although air quality had been improving, legal limits in force since 2010 have still not been met and in 2016 the UK High Court ruled that the Government’s plans at the time were so poor as to be illegal.

In the North East, illegal levels of air pollution are still being recorded in Newcastle, Gosforth, Gateshead (by the Tyne Bridge), North Tyneside (the Coast Road), Durham and Sunderland. 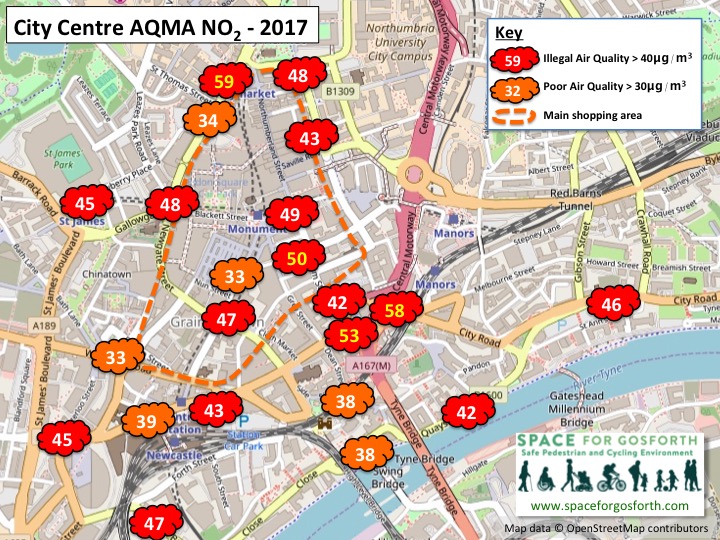 The approaches that are most effective at reducing air pollution are reducing vehicle volumes e.g. through access restrictions or road charging, or cleaner engines.

The Tyneside Councils’ proposal included two alternatives for charging: a Charging Clean Air Zone or tolls on the Tyne bridges. The later option also included access restrictions where older more polluting buses, taxis and HGVs would not be allowed in Newcastle city centre.

It’s not just good for the children either. A study of 250,000 UK commuters showed that adults who walk or cycle substantially reduce their risk of cancer and heart disease.

If you do need to use a car please consider “Park and Stride” – parking away from the school and walking the last few hundred meters. If the school has a dedicated car park, please don’t idle your engine and let other parents know why they should turn off their engines as well.

If you are worried about walking on polluted streets, it may be possible to find a quieter route, but even if you can’t it has been shown that the health benefits of cycling and walking ‘outweigh air pollution risk’. 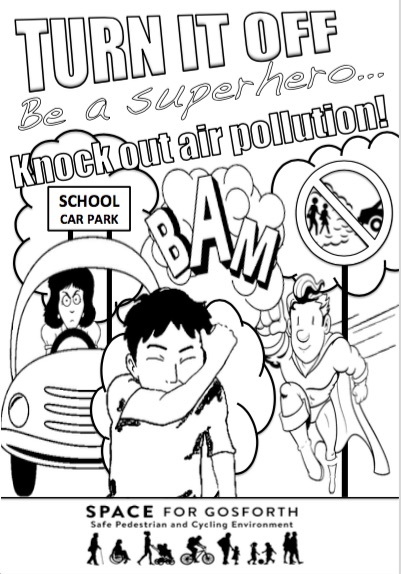 4. What else could the Council do?

We know, when thinking about walking or cycling with children, it isn’t a simple matter of choice and that there are real and serious barriers that make it harder for families to walk or cycle.

SPACE for Gosforth has spent the last three years looking at how to make it easier and safer for residents of all ages and abilities to walk or cycle around Gosforth.

We know from Council measurements that some residential streets have high levels of traffic and speeding vehicles and that speeds over 20mph dramatically increase risk for children. We have done a “blind walk” on Gosforth High Streetthat highlighted lots of issues for people with visual impairments.

We have found research that shows where parents will allow their children to cycle, and that for the most part current road layouts don’t meet that standard. We have assessed local streets for whether they support inclusive cycling for people who cannot use a standard bicycle.

There are also pleny of good local examples of low-traffic neighbourhoods where it is safe for children to travel and to play out.

Your voice is important. If you want streets that are safe for children, please do speak to your school and let Local Councillors know about what would help you and your family.

Thank you for your support.