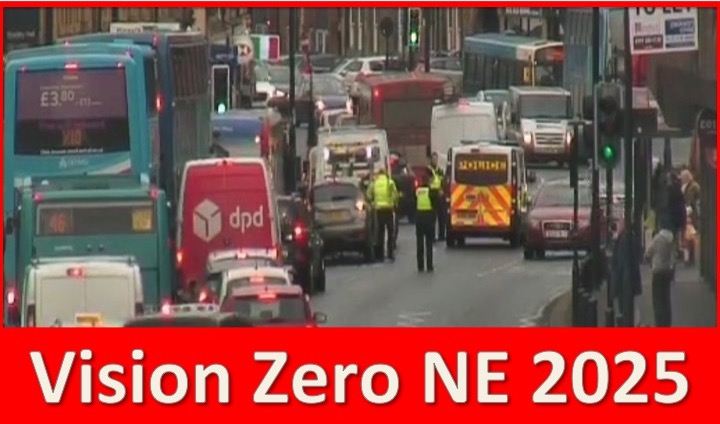 Traffic engineering is frequently a compromise between vehicle speeds and people’s safety. Higher speed limits and multi-lane junctions allow traffic to pass more quickly but, when collisions happen, people are more likely to be hurt and their injuries are likely to be worse.

Many of us will be aware of Layton Darwood (age 5), Melissa Tate (age 10), George ‘Geordie’ Bilclough, Emma Guilbert, Ann and Lawrence Nickerson, and many others who have been killed in recent years in Newcastle due to road traffic collisions.

Serious road traffic injuries can also be devastating and life changing. In this blog we share some examples reported locally in the last few months.  We also share some good news about what Councils in the North East are doing to stop people being killed or seriously injured on the roads in future.

Example 1: “The 19-year-old victim, an undergraduate who was on her way to Ikea in her mum’s Fiat 500, suffered devastating injuries that left her needing a plate and screws being fitted into her broken pelvis. The student spent four months on crutches after the crash and could face long term implications from her injuries, including early arthritis.”

He left a 19-year-old with devastating injurieshttps://t.co/rlIi43incQ

A Compromise Between Vehicle Speeds and People’s Safety

What is this ‘compromise’?  In Newcastle, official road collision data shows that on average, 4 people are killed every year, 92 are seriously injured and a further 780 are slightly injured. Across the North East there were 622 deaths, 8,328 serious injuries and 59,572 slight injuries recorded between 2010 and 2019.

Despite these frighteningly large numbers, changes to improve safety for children and other vulnerable road users are often loudly opposed by a loud minority of people unwilling to accept an alternative compromise in which fewer people are killed or injured.

This is despite substantial evidence that investing in ‘faster’ roads results in more traffic rather than any time saving due to induced demand.

Example 2: “Bethany Oliver was 18 when a collision caused by a speeding driver robbed her of the ability to walk and talk Since getting out of hospital, she has spent five years living at the Alan Shearer Centre, where she receives constant specialist care.”

Bethany Oliver was 18 when a collision caused by a speeding driver robbed her of the ability to walk and talk https://t.co/u7UcskPg0R

Thankfully, it looks like there will now be a much greater focus on keeping people safe, with a new regional target set to end deaths and serious injuries on our roads.

Transport North East has stated its “aim is for there to be no fatalities or serious injuries on the regions’ road network by 2025.”

No fatalities or serious injuries is often referred to as Vision Zero, an approach to road safety originally from Sweden but now adopted across the world. SPACE for Gosforth supports the Vision Zero approach, and has previously urged Newcastle City Council to join other cities around the UK in adopting the Vision Zero charter and target.

We also asked Police and Crime Commissioner candidates if they would support Action Vision Zero’s priorities for how to keep us safe when travelling in our local communities.

Example 3: “Cellist Laura Armstrong’s main artery was destroyed, meaning she needed a vein graft during emergency surgery. What followed was a series of major operations, including an 11 hour procedure involving skin and nerve grafts. Almost two years on, she’s still undergoing significant treatment. Devastatingly, the 23-year-old’s injuries also meant she was unable to continue with her master’s degree at the Royal College of Music.”

Newcastle musician left with horrific injuries after being hit by a lorryhttps://t.co/kq2RbW04Lc

2025 is an ambitious target. To achieve this Councils will have to act quickly and do more than just run adverts asking people to change their behaviour. To actually achieve Vision Zero, roads and junctions need to be designed not just to minimise the chances of a collision but also to minimise the impact when there is a collision.

The most effective measures to cut road deaths and serious injuries focus on reducing road danger. These include:

A good explanation of engineering concepts for road safety can be found in this video titled ‘Systematic Safety: The Principles Behind Vision Zero’. StreetsBlogUSA has also written about why “Not So Fast: Why Slower Is Often Better“.

We listen to your Road Safety concerns, log them all within Operation Modero and where we can, utilise our Road Safety Vans. We've detected thousands of offences since it started in August 2020. Tell us about your speeding issues & we'll do what we can. #NPRoadSafety #Modero pic.twitter.com/CMuUxh7dda

Example 4: “A schoolboy has had to have a foot amputated after a road accident – but the courageous youngster has vowed to get his life “back to normal” as soon as possible.”

Brave Gosforth schoolboy, 10, vows to be 'up and about soon' after heartbreak of having foot amputatedhttps://t.co/S302IxfLia

In Newcastle, there’s a strong democratic mandate to make these changes, and to implement trials quickly without delay. The vast majority of people voted for candidates that support safer streets as well as taking urgent action to address the Climate Emergency, which these measures will also help. 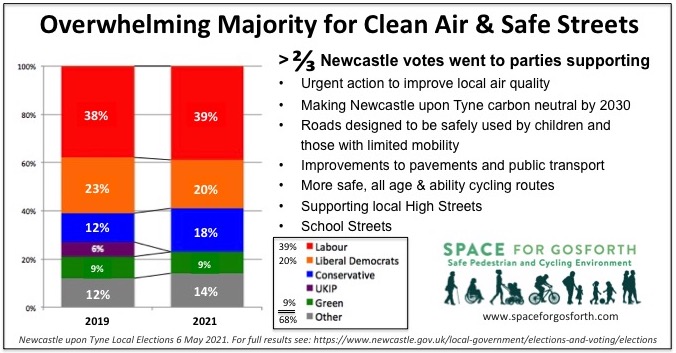 Trials such as the five bridges are consistent with manifesto promises for safer streets, addressing pollution and the Climate Emergency. The pre-trial status quo, 96 people killed or seriously injured in Newcastle on average every year, doesn’t align with any democratic mandate so there’s no reason to retain it any longer than absolutely necessary.

This is a question of priorities, not money. Hundreds of millions of pounds of government funding is directed towards saving a few minutes on journeys, such as £220m on the A1 bypass, compared to a fraction of that on safety interventions or on enforcement of road traffic laws such as speeding. The Government’s Road Investment Strategy is forecast to cost £27.4 billion.

Spending just a fraction of that on road schemes to reduce road danger could mean many  fewer families having to suffer the anguish of loss that could have been prevented.

The UK National 30mph limit has been completely discredited. 1/3rd of UK population no longer use it. The DfT advises considering rejection where people mix with cars. UN says urban norm should be 20mph. And with 70,000 casualties pa on UK 30mph roads our video explains why pic.twitter.com/dA615eWFnJ

2 thoughts on “No more road deaths, no more serious injuries”