Another packed SPACE for Gosforth event took place on Wednesday 27 January. This time people came to hear Professor Mark Tewdwr-Jones talk about the City Futures project, and how Newcastle might look in 2065.

One of the project aims is to encourage people to ask what’s the future for city, what kind of place do we want for ourselves and our children? Part of the research involved engagement and collaboration with over 2500 Newcastle residents and over 50 different public, private, community and voluntary organisations.

Three future scenarios were developed from this to stimulate further discussion:

The test-bed scenario, with the city focussing on innovation in engineering, technology and public health,  is the most dynamic and exciting.

However we imagine the future though, it will be different.  To illustrate this Mark looked at how the Quayside has changed over the last 50 years from 1965. If you’re old enough you’ll remember a very different place, very industrial, not somewhere you’d go to spend leisure time.

In 1969 architects Ryder and Yates were looking into the future and produced the concept for the Tyne Deck – a wide concrete bridge at ground level spanning the river east of the Tyne Bridge with an art gallery,  concert hall and  restaurants – as a means of creating a joint ‘City of Tyneside’.

People at the time wondered where the ships could go, and obviously it didn’t get built, but as both sides of the river have been developed over the last 25 years some of that vision has materialised. Now there is an art gallery, theatre, concert hall, restaurants, bars, even a beach in summer.

The City Futures engagement events in 2014 were well attended. People were keen to see the city evolve, they had lots of ideas, they wanted to discuss them and to be involved in decision making.

At the SPACE for Gosforth event, discussion covered the city’s future growth and how it can be sustainable, climate change, and having a bold vision for the future.

If Newcastle became a test bed city for the UK, could Gosforth become a test bed area for Newcastle? Trying new forms of public participation in local decision making, finding ways to change the High Street to give more space for people to enjoy shopping and relaxing, encouraging residents to leave their cars at home and take the healthier and pollution reducing options of walking, using public transport and cycling. 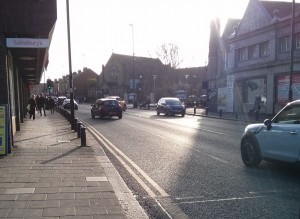 In short, how do we make Gosforth a better place? Let’s discuss …

1 thought on “Newcastle City Futures – what’s the future for Gosforth?”