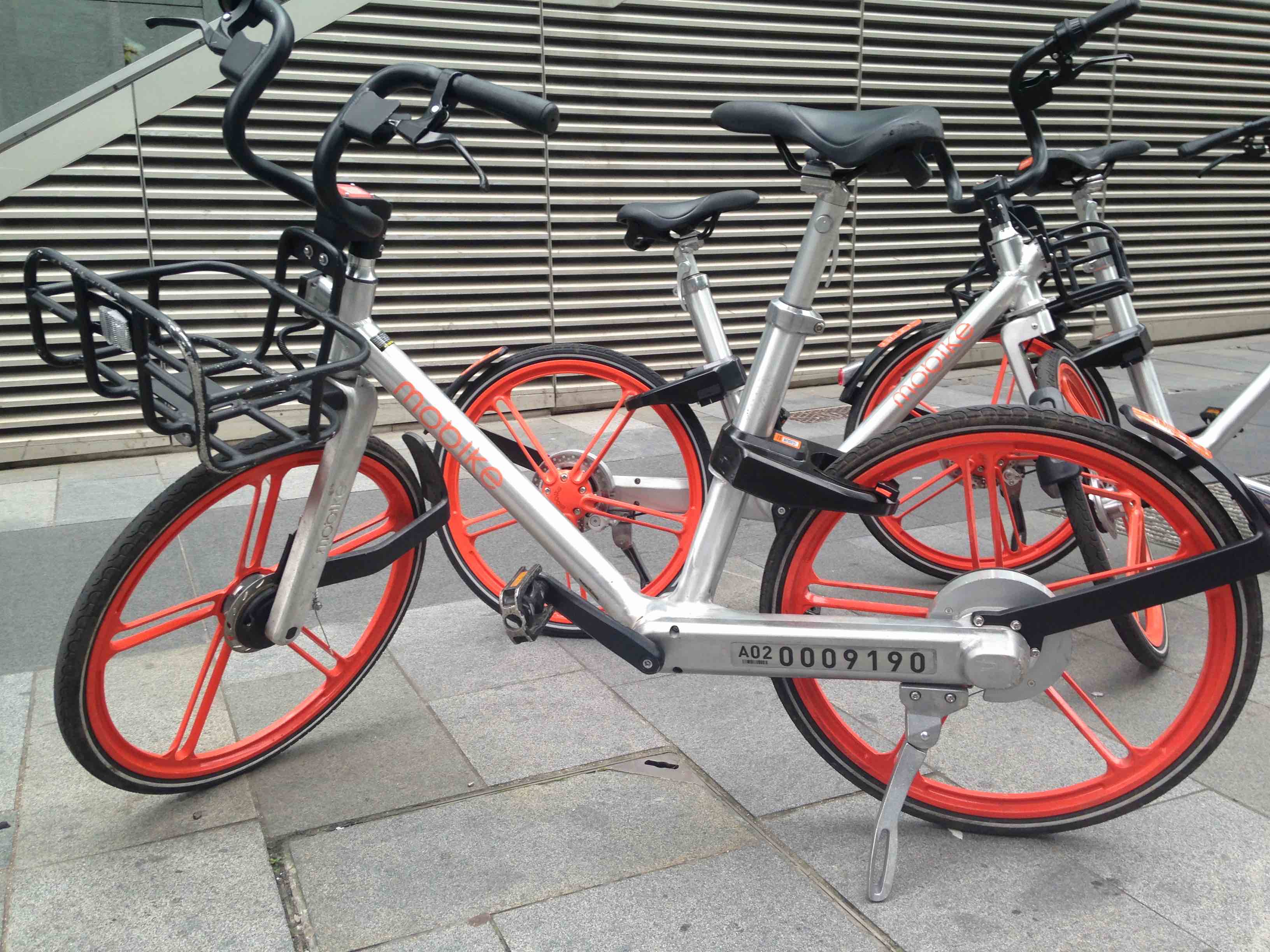 Mobike, the international “dockless” bikeshare company, has just announced it will be launching in Newcastle with 1000 bikes soon to be deployed for residents and visitors to hire for short trips around the city.

One of our members was visiting Manchester, which already has Mobikes, and decided to try one out.  This is his report:

Dockless bike hire schemes are still relatively new in the UK though well established in parts of Asia. In Shanghai, China for example there are reportedly 450,000 dockless hire bikes just in that one city. The difference to a scheme with ‘docks’ like the London ‘Boris’ bike is that dockless bikes can be left anywhere as long as they are (a) parked sensibly and not blocking pavements or the road and (b) within the Mobikes area limit, which in Manchester covers most of the city centre.

All the bikes have GPS trackers and can be accessed via the Mobike app, which can be downloaded from the App Store or Google Play.  There is currently an offer where Mobike only require a £2 deposit, usually it is £29. This offer lasts until 18 October 2017 and is open to anyone despite  being described as a student discount.

Once you have dowloaded the app, you need to set up an account and add some credit. At 50p per 30 minute journey though you don’t need much.

I arrived in Manchester at Piccadilly Station and loading up the app it showed me where all the nearby Mobikes were. Selecting one of the bikes allows you to reserve a bike for 15 minutes, which means that you have time to find the bike without someone else getting there first. Once selected the app also shows a walking route for how to get to the bike.

I found out quite quickly that the GPS positioning isn’t completely accurate. The first bike I tried to find looked like it should have been in the station car park but I suspect was actually on the road the other side of the car park wall where I couldn’t get to. The second I did find, though the location was also a bit out, almost certainly not helped by the bike being parked under a railway bridge. 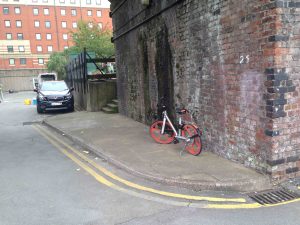 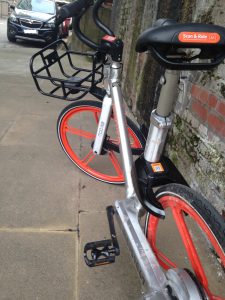 Once you find your bike you can unlock it by scanning a QR code on the stem, and in just a few seconds – as if by magic – the lock undid itself and the bike was mine to use.

Traffic in Manchester was relatively light though you do need to watch out for hazards like tram lines (and trams!) that we don’t have in Newcastle. Using a hire bike is a great way to explore a city as you can move fairly quickly but also stop to look if you spot anything interesting. 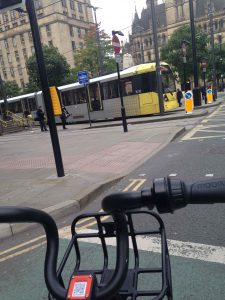 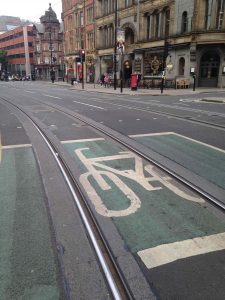 The bikes themselves were pretty sturdy and relatively comfortable to ride. There’s no chain so no chance of oily trousers and they didn’t feel particularly heavy like some hire bikes can be.

I don’t know if we will get the same bikes in Newcastle as in Manchester, but I can see that with only one gear it would be quite a challenge for anyone wanting to cycle up Dean Street and Grey Street from the Quayside. I also found that the seat post didn’t extend quite far enough up for me. My guess was that anyone over about 5’8 might think the same, which could affect quite a lot of people, although on the flat it is not a great problem. 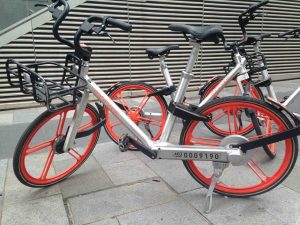 Once you get to the end of your journey and have found somewhere to park the bike you just close the lock and the bike sends a signal back to Mobike to say your hire has ended. In the app it will show you how much you have spent and you can see a record of where you have been. 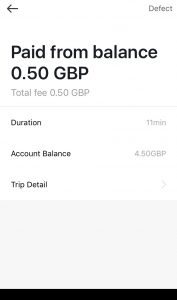 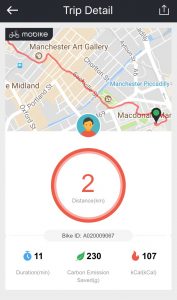 You can also report faults on the app and get points as a result (though I don’t think they are the sort you redeem).  Conversely, if you park in the wrong place or don’t lock the bike you can  lose points.

I didn’t have any problems with the bikes, though I would have quite liked an option to report a faulty bike lane like this bus sandwich I encountered on the way back to the station! 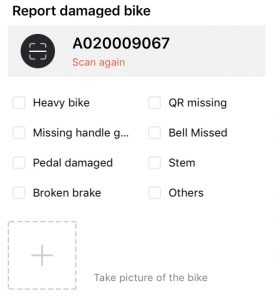 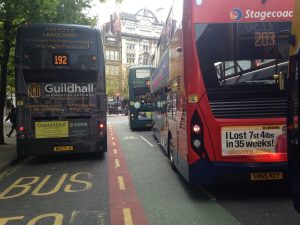 Although I didn’t need them in daylight we’ve been told by Mobike and by other users that the bikes do have lights so can be used after dark. There doesn’t seem to be an alternative option to using a smart-phone though.

So, although Mobikes are certainly not perfect, I enjoyed my rides across Manchester despite that and I’m sure I will use them in Newcastle when they arrive.  It will be interesting to see if Mobike will upgrade their bikes to remove these limitations. TfL London hire bikes have three gears and very extendable seat posts, so it is definitely possible.

We will have to wait to see what impact Mobike will have in Newcastle but emerging evidence from China is showing that the bike-share boom is reducing car use in cities and even leading to forecasts that less fossil fuel will be burned in the future.

One major benefit will be in extending the reach of public transport where people arriving in Newcastle by train or bus use a bike for the final part of their journey, a similar logic to the Dutch OV-Fiets hire scheme which is based at train stations, bus and metro stops and Park+Ride sites.

[Correction made 5/10. Mobikes do have lights. Thanks to Mobike and Geo for pointing this out]

9 thoughts on “Mobike to launch in Newcastle”