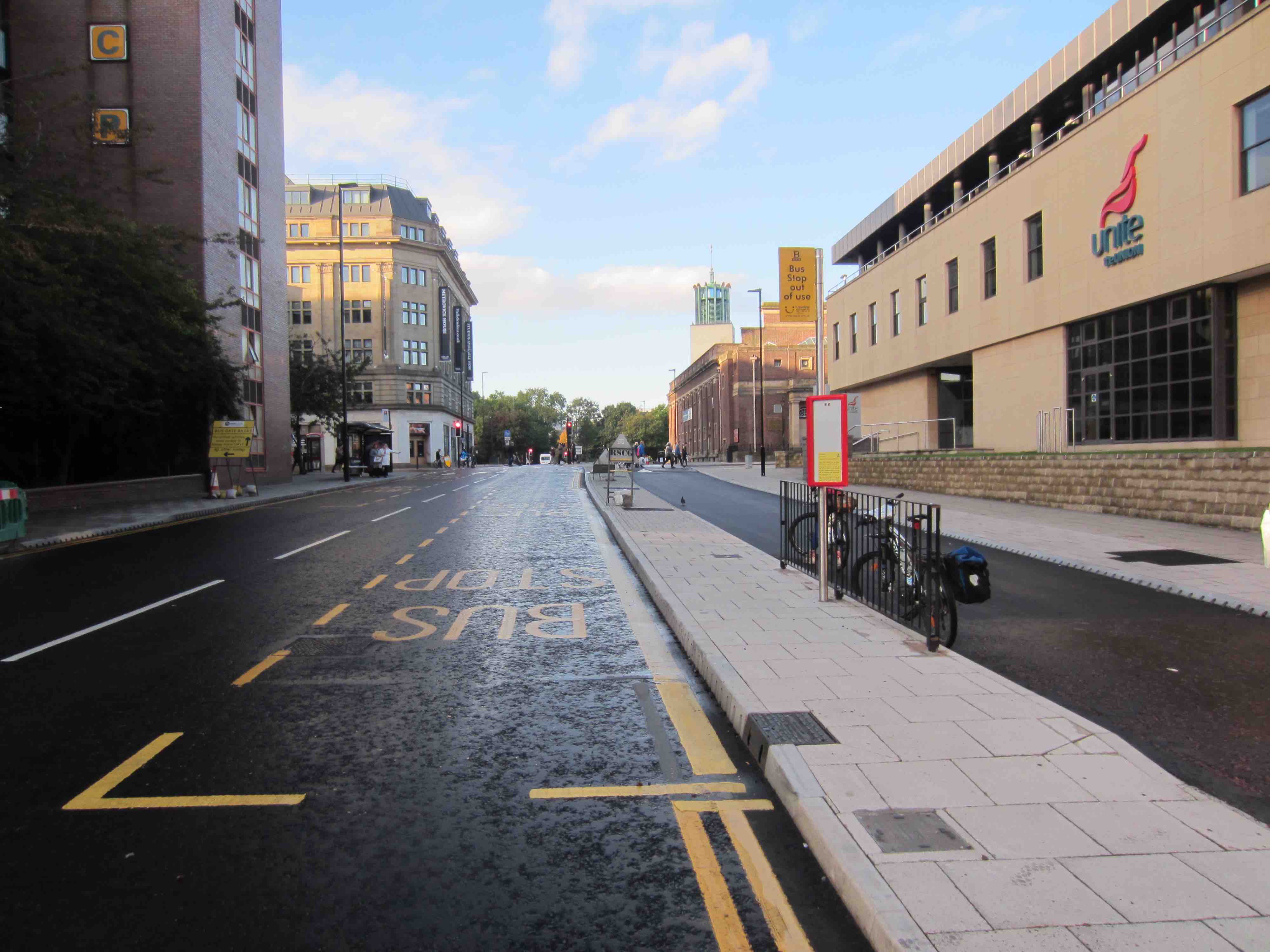 In this post we want to look at the new street layout on John Dobson Street, and whether it has improved the experience of those who use this street.  The improvements are a flagship project for Newcastle upon Tyne City Council, with a new traffic-free cycle lane that links Newcastle Civic Centre at St. Mary’s Place and the Blue Carpet in front of the Laing Art Gallery and the Journey (Newcastle’s healthy travel centre) on New Bridge Street West.

The new cycle lane has led to an improvement in the street for pedestrians.  This photograph from Google Streetview (right) shows the limited space pedestrians previously had on this street – space that was further reduced as it was also the waiting area for bus passengers, and was a shared use pedestrian and cycle way.

The new street layout provides much more space for pedestrians as they now have a wider pavement which they do not have to share with people queuing for a bus or with cyclists.  The bus stops have been relocated to the other side of the cycle lane, and again those waiting on that side have substantial space. 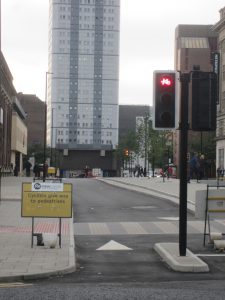 Pedestrian crossings are also clear.  There is a signalised crossing on the road and zebra style crossings on the cycle way, which clearly indicate where pedestrians have right of way.  Tactile pavements (the pink bumpy slabs behind the yellow sign) have been placed next to the crossings to signal to pedestrians with visual impairments where the crossings begin and end.

It will also be a much more pleasant environment for pedestrians – they are now much further from the noise and exhaust fumes produced by motorised traffic.  John Dobson Street has been further enhanced by planting trees, which have been linked to improving people’s physical and psychological health and can even cut air pollution.  This is important because John Dobson Street is within the City Centre Air Quality Management Area. 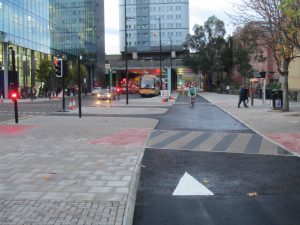 The improvements for cycling are dramatic.  Among the things we like about the new cycle lane are: 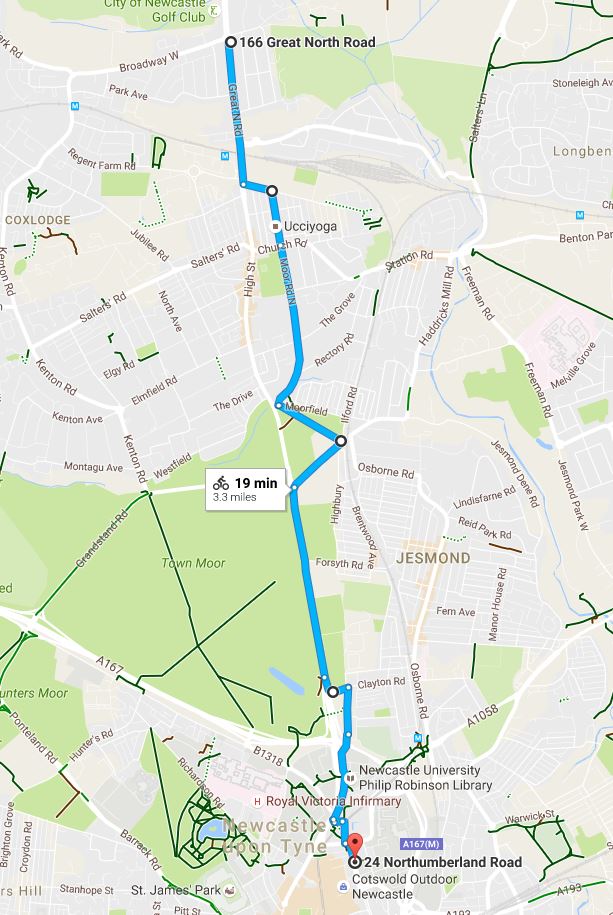 The cycle lane also means that Gosforth residents now have a near continuous cycle route from Broadway roundabout to the heart of the city. This route is not perfect, and there are a number of issues that may make it unsuitable for cyclists, particularly for less confident cyclists or for families  cycling with children.  These issues include:

Despite these issues, Gosforth residents now have a reasonably fast cycle route into the city centre.  Google Maps estimates the journey by bicycle from Broadway roundabout to the city to be 19 minutes (see above map) – that is only 8 minutes slower than the fastest car route without congestion (see map below).  However at peak times, the cycle route is likely to be faster.  In addition, the calculation for the car does not include additional time required to park. 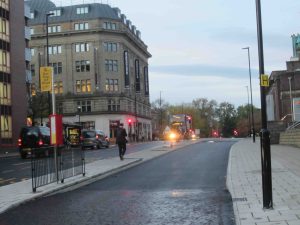 The changes may also make the rest of John Dobson Street less attractive as a through route for non-authorised vehicles, and this could further improve journey times for people using buses.

Cars may appear to lose from this scheme, as they will no longer be able to drive through the northern stretch of John Dobson Street.   However, this overlooks that only three years after John Dobson Street was originally opened in 1970, the A167(M) the Central Motorway was opened as a through route for traffic to bypass Newcastle city centre.  As the map shows, the A167(M) provides quick access to destinations on John Dobson Street from both the north and the south.  Access routes from the east and west of the city also link to the A167(M). 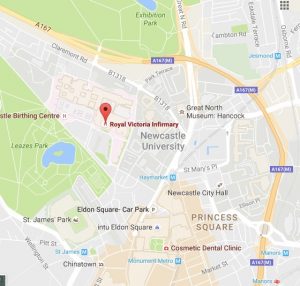 One concern that was raised about the closure is that it could impede access to the Royal Victoria Infirmary and the Civic Centre.  However, as the map on the left shows, the A167(M) Central Motorway is a quicker and more natural access route for the RVI via the Claremont Road junction.  This junction could also provide access to the Civic Centre.  There is also good bus and metro access to these destinations and emergency vehicles will not be affected by these changes.

Another factor which must be considered with regard to car usage of John Dobson Street is that Newcastle City Council is legally required to reduce levels of nitrogen dioxide within the city centre as the city centre is one of Newcastle upon Tyne’s two Air Quality Management Areas (the other is the South Gosforth AQMA).  It is particularly welcome that Newcastle City Council is taking steps to address this issue in light of the recent High Court Judgement against the UK government with regard to air pollution.

A Street Worthy of John Dobson?

One of the great ironies of Newcastle upon Tyne city centre is that John Dobson, architect of Grey’s Monument, Grey Street and other buildings of Grainger Town, was commemorated with one of the ugliest streets in the city, a product of the same wave of redevelopment that destroyed some of his own buildings, including the Royal Arcade.

John Dobson’s work in Grainger Town continues to form vibrant streets that remain the heart of the city, and it feels fitting that this new redevelopment has humanised the undistinguished street that otherwise does not deserve to bear his name.