In our last blog we looked at traffic levels on Station Road. We found that neither Station Road nor Sandy Lane were busier or more congested following the closure of Stoneyhurst and Salters bridges.

In this blog we assess the impact of Haddricks Mill roadworks and closing Dene Bridge to motor vehicles.

Just like for Stoneyhurst Road and Salters Bridge, a large proportion of people who responded to the Dene Bridge consultation thought that it would result in displaced traffic and additional congestion on surrounding roads.

While the roadworks were clearly inconvenient to many, they had some positive side effects of fewer injuries, reduced traffic levels on Haddricks Mill Road and most likely a substantial, though temporary, cut in carbon emissions from less driving.

Traffic levels and air pollution measurements on Station Road (measured at the entrance to Haddricks Mill roundabout) remained high during the roadworks, but did reduce in 2020 due to Covid.

Three major changes have been implemented.

The locations of these changes are shown on the map below. 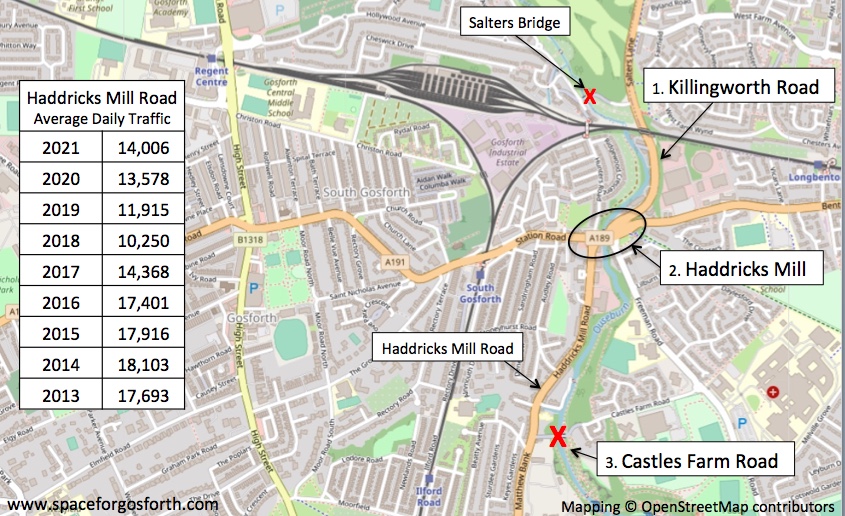 The new Haddricks Mill junction was completed in the summer of 2020, marking the end of three years of roadworks at Haddricks Mill and on Killingworth Road.

Since July 2021, traffic levels have been back where they were before 2017, but no higher. This suggests that closing Dene Bridge to motor vehicles has not caused any extra traffic on Haddricks Mill Road. 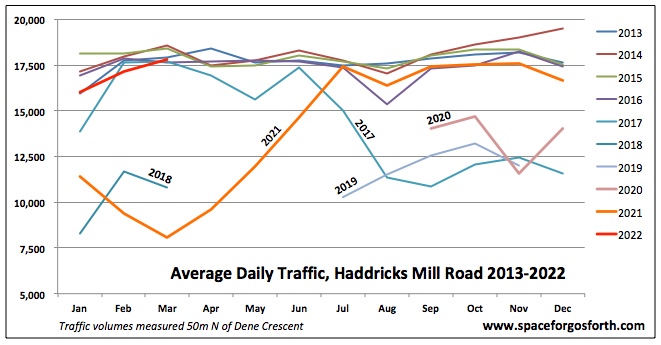 This is consistent with traffic counts that showed there was no increase in traffic on Station Road when Salters Bridge and Stoneyhurst Road were closed to motor traffic. We also previously found that traffic did not increase on either Great North Road or on Benton Lane after Killingworth Road was closed for roadworks.

These are all examples of ‘disappearing traffic’.

Using the TADU Road Safety dashboard we counted injuries due to traffic collisions at Haddricks Mill junction. Between 2005 and 2016, there were 12.4 injuries on average per year making this one of the most dangerous junctions in the NE. 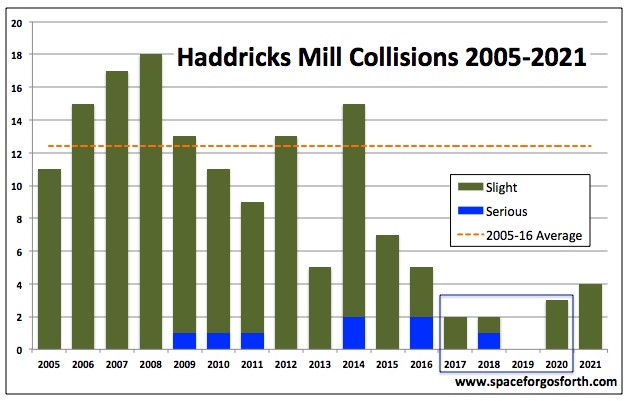 The number of injuries remained lower in 2020 and 2021, which might be due to there being less traffic due to Covid, or possibly the changes the Council believed would improve safety at the junction are having an effect.

In 2019, we wrote to the Council to express our concerns that the new junction would not reduce collisions as (a) cycle routes were too slow and wiggly so people who already cycled would most likely continue to use the road, (b) multiple entry lanes are known to make roundabouts less safe, and (c) high corner radii mean vehicles can enter and exit the roundabout at a higher speed. 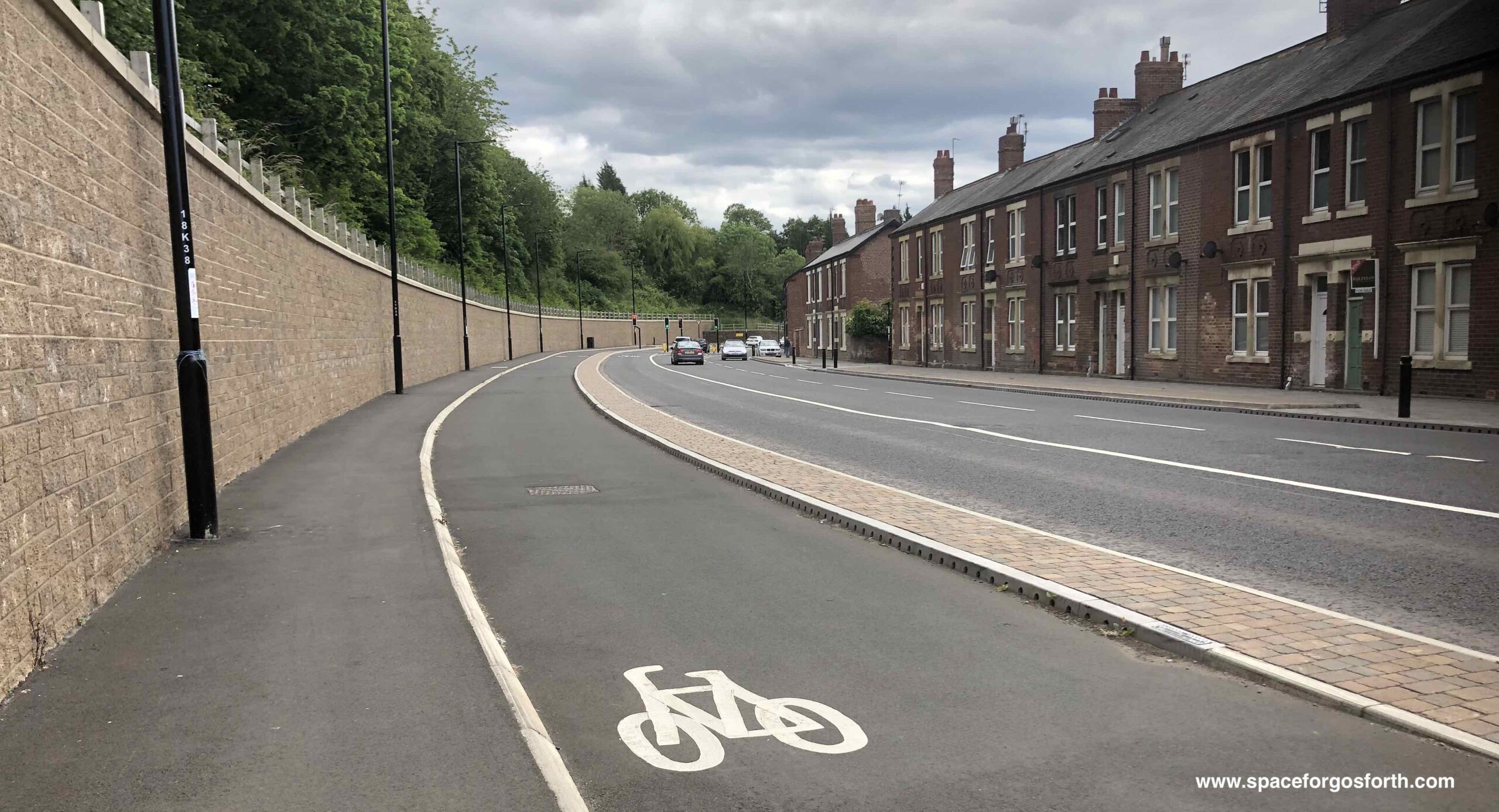 With traffic back to pre-2017 levels, and no obvious mitigations to reduce pollution in place, we remain concerned that pollution will return to previous levels.

There are two sites where Nitrogen Dioxide (NO2) air pollution is monitored near Haddricks Mill. These are at the end of Station Road and by Dene Park House on Killingworth Road. 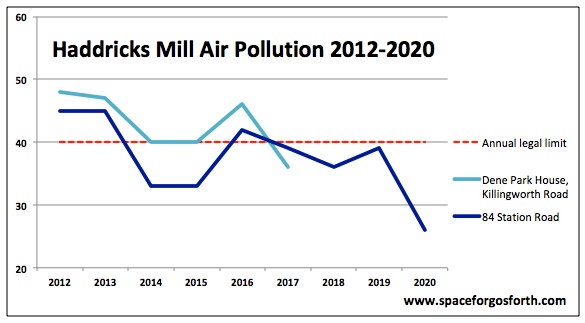 The graph above shows that the road works had little effect on air pollution on Station Road. This is perhaps not surprising as traffic levels on Station Road were fairly constant throughout.

While pollution wasn’t measured on Killingworth Road between 2018 and 2020, almost certainly it would have been much lower due to the complete absence of traffic. Pollution measurements for 2021 should be released in the autumn.