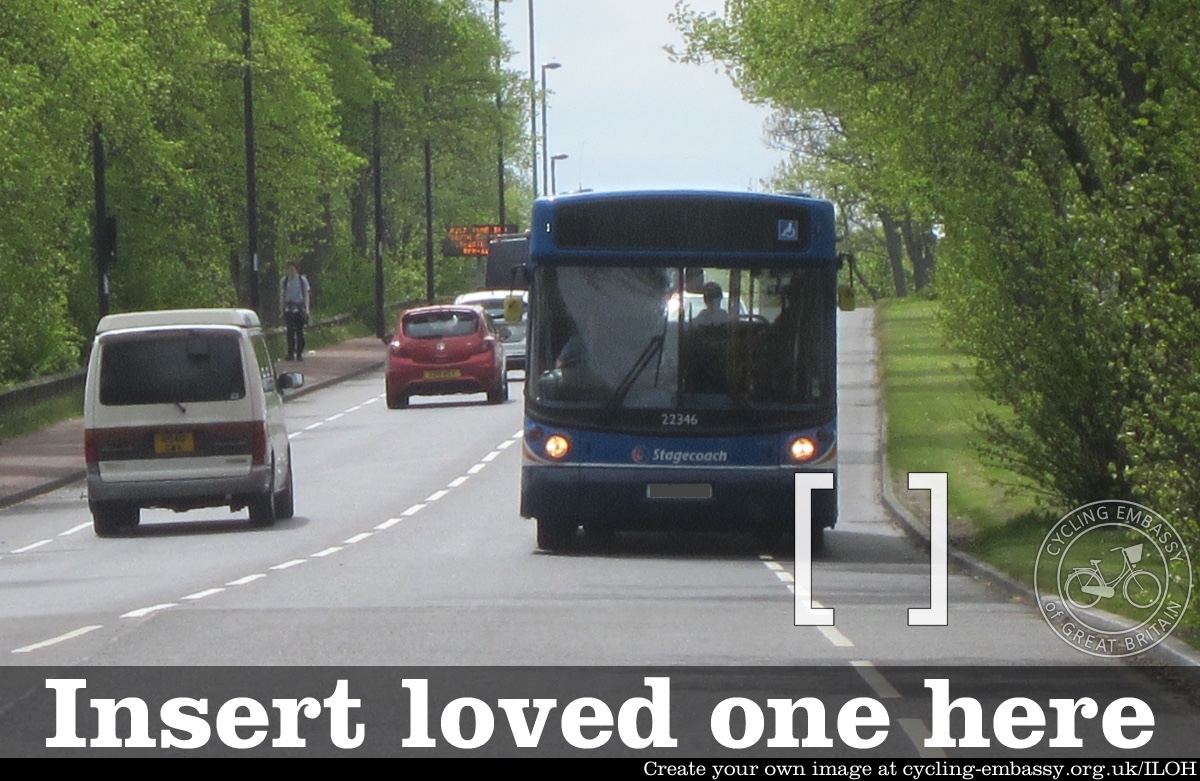 Grandstand Road used to be one of the worst places to cycle in Gosforth, even with marked cycle lanes. With heavy traffic, often travelling in excess of the 40mph speed limit, cycle lanes barely wider than a set of handlebars and deteriorating surface, it was both scary and unforgiving.

The picture above shows how it is now (May 2018) with a new road surface, and slightly wider cycle lanes provided by removing the central hatching which previously separated the two traffic lanes. The square bracket in the picture is to show where you and/or your family are expected to cycle.

What does this mean?

Clearly the changes are an improvement, though arguably not by much:

The main thing that hasn’t changed is that people cycling are still expected to share the road with vehicles including buses and lorries, which can travel legally up to 40mph. Although collisions are thankfully rare, partly because few people would want to cycle in such conditions, if someone was to be hit by a vehicle at 40mph then nine out of ten times that would be the end of their life. If the vehicle is larger, say a bus as in the title picture, or is travelling faster, or the person is frail, a child or an older adult, then the chances of their survival would be even less.

Driving in the cycle lane

If everyone drives in the main carriageway and cycles in the cycle lane then there wouldn’t be a problem of course, but as with the title picture we know that won’t always happen. Plus, because the lanes are advisory, marked as a dashed line, it is perfectly legal for cars and buses to be driven in the cycle lanes.

Logically we know that if there was someone cycling, the bus driver would most likely have taken more care, slowed down and given additional space, as required by the Highway Code which says to give motorcyclists, cyclists and horse riders at least as much room when overtaking as if overtaking a car. It is doubtful though that a parent deciding whether to cycle along Grandstand Road with their child would take much comfort from that.

So was the bus a one-off, or do lots of vehicles drive in the cycle lane? We went to have a look to see. The following four photos show four vehicles all driving in the cycle lane. See if you can guess how long it took to take these pictures – there’s a clue in the photos. 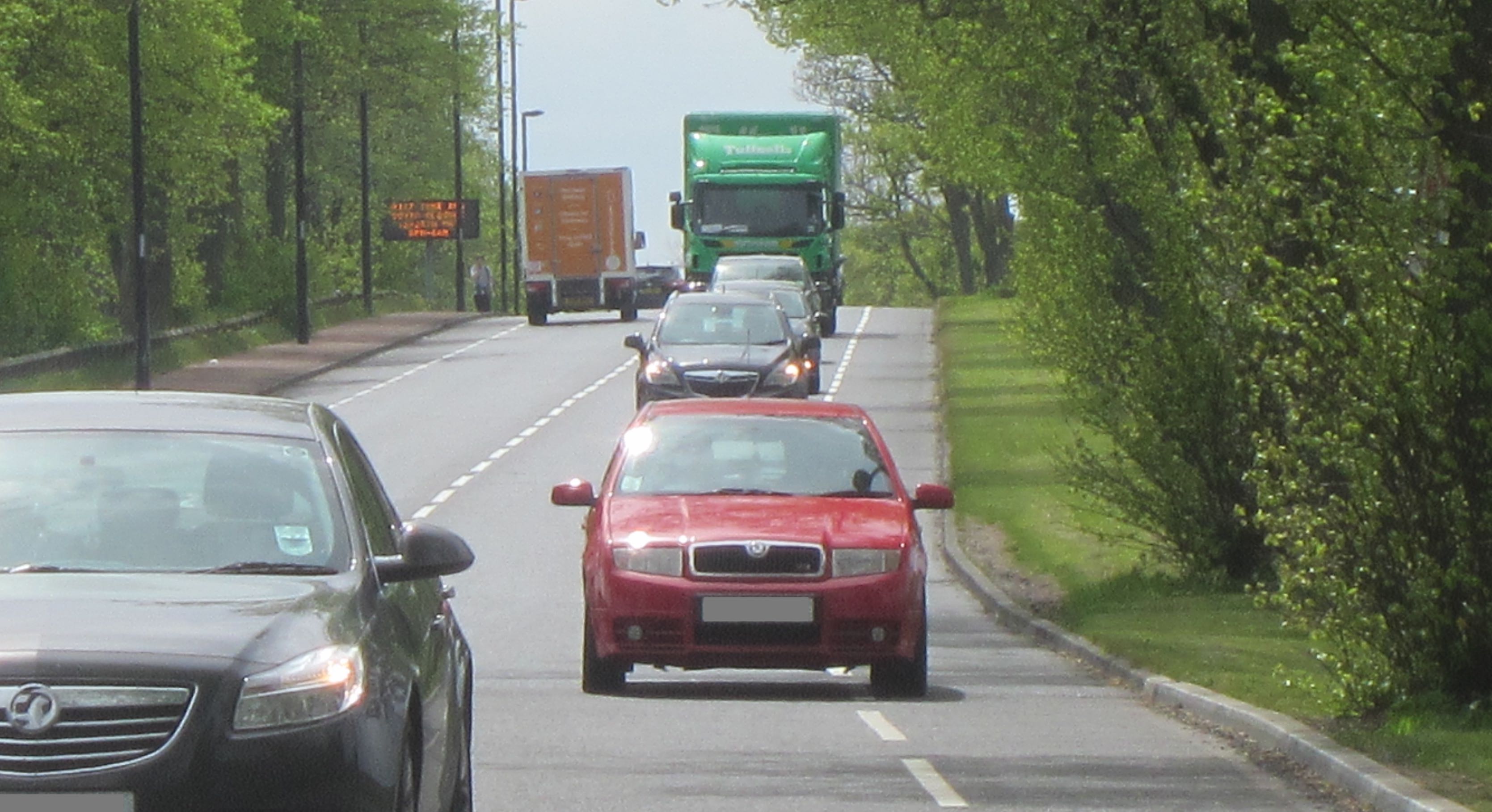 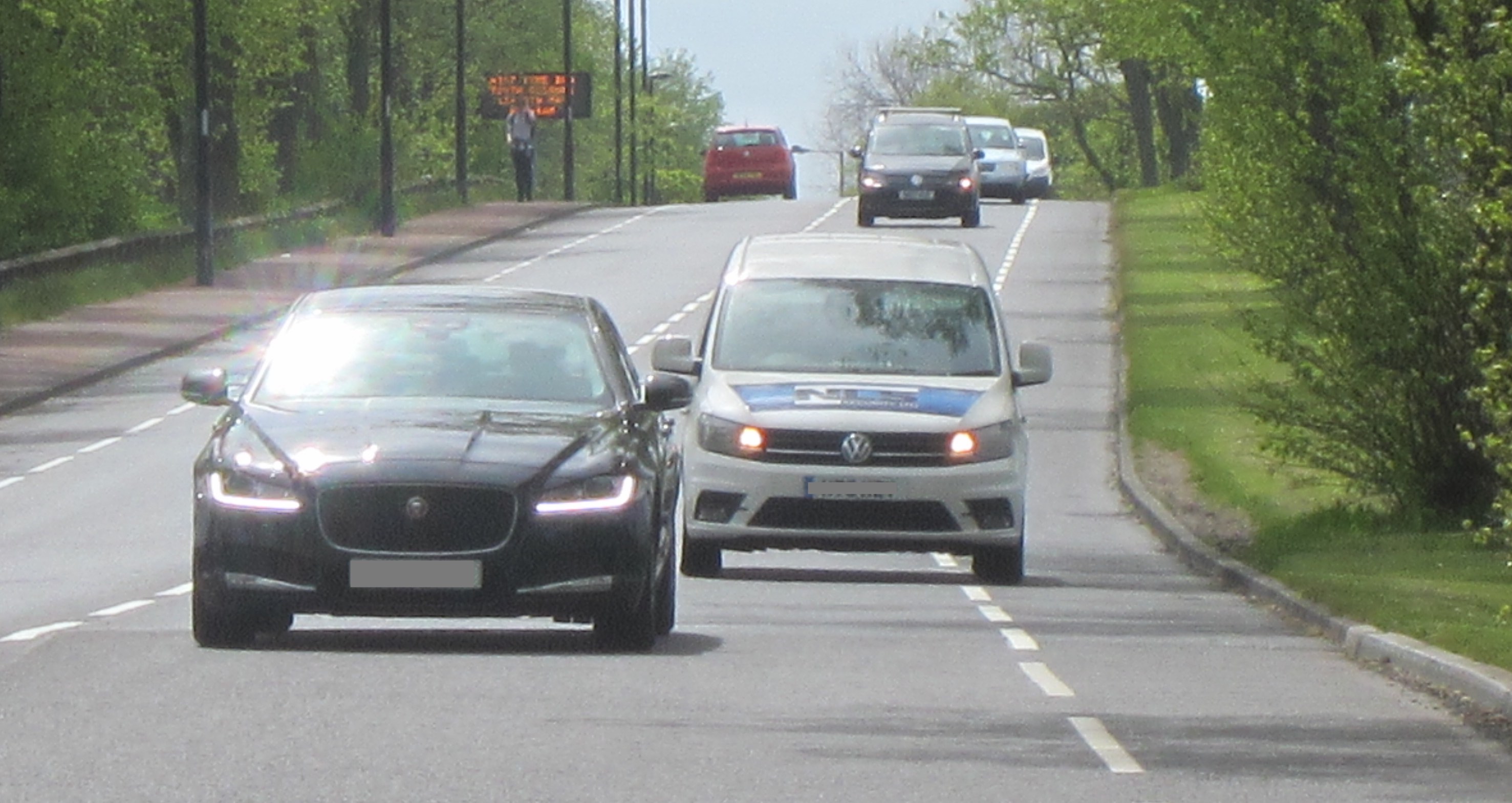 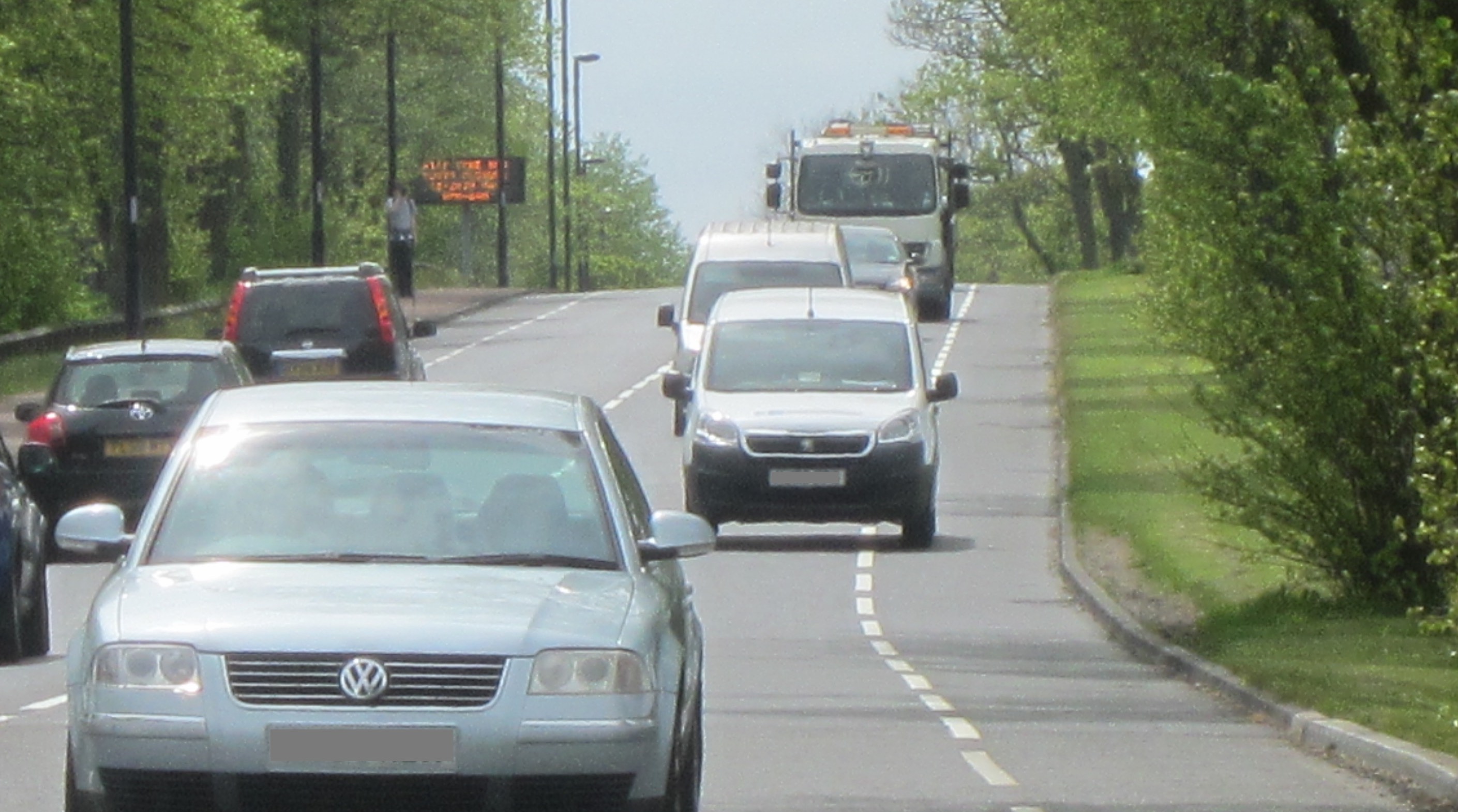 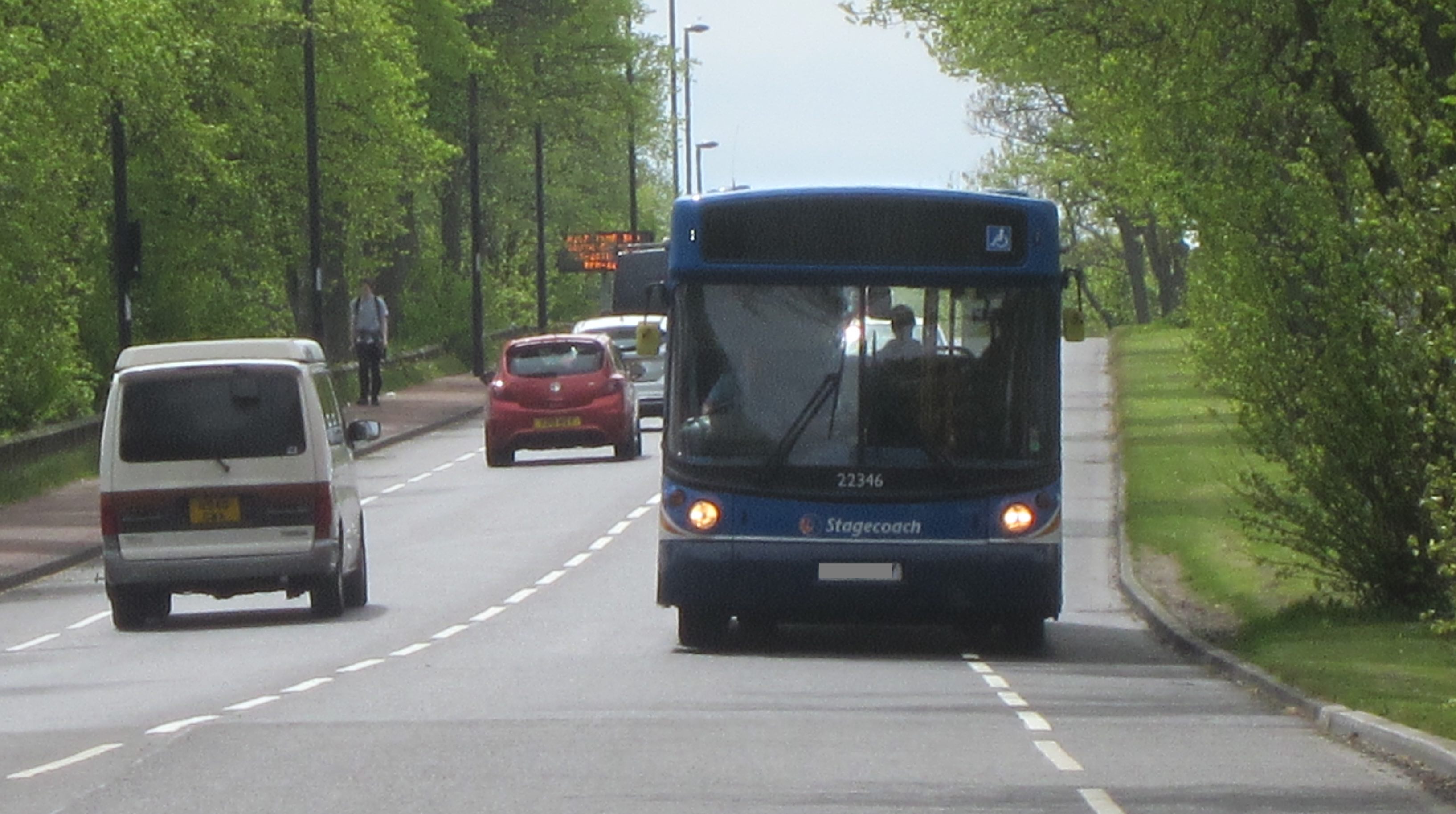 Did you spot the clue? On the first photo you can see a person walking towards the camera on the pavement just by the electronic sign. By the fourth photo he has walked three lampposts from where he started. So how long between the photos? About one minute or one vehicle in the cycle lane every fifteen seconds.

Cycling in the driving lane

Again, it’s perfectly legal to cycle on the main carriageway, but why would anyone do so given the choice? The lane itself is sufficiently wide (just) for a normal cycle and the surface is ok too.

Conveniently in the few minutes we spent watching, someone came past to illustrate exactly why. To be fair to the person cycling (who we don’t know) for most of the length of the road they were in the cycle lane. About where he is in the photo though it ceases to be of much use if travelling straight on towards Blue House roundabout.

Here’s a photo a few seconds later. Because the cycle lane stays to the left of the left turn lane, anyone wanting to go straight on who stayed in the cycle lane would have been trapped. 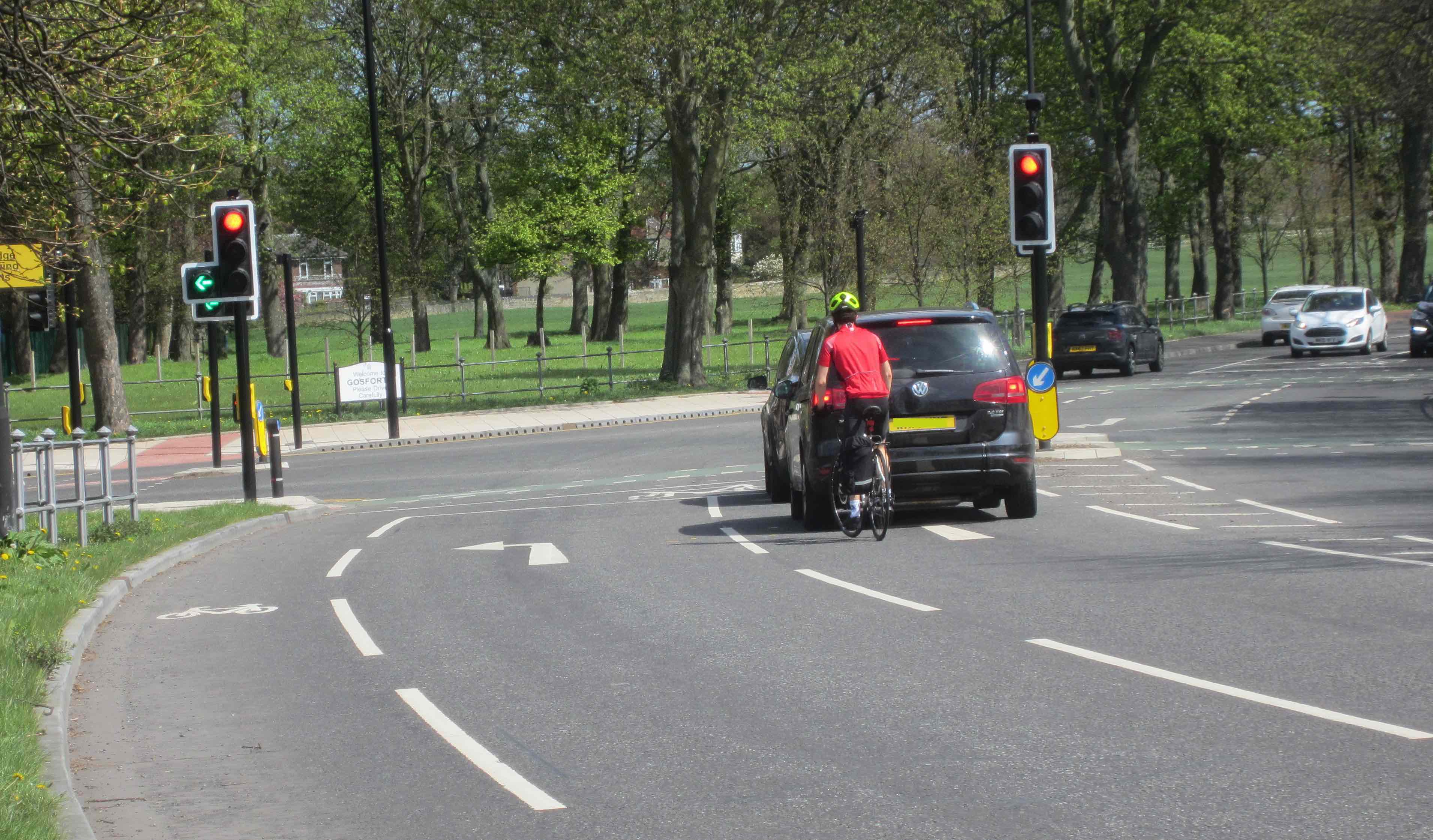 If that’s not very clear, here’s another photo. This bus is about to turn left. 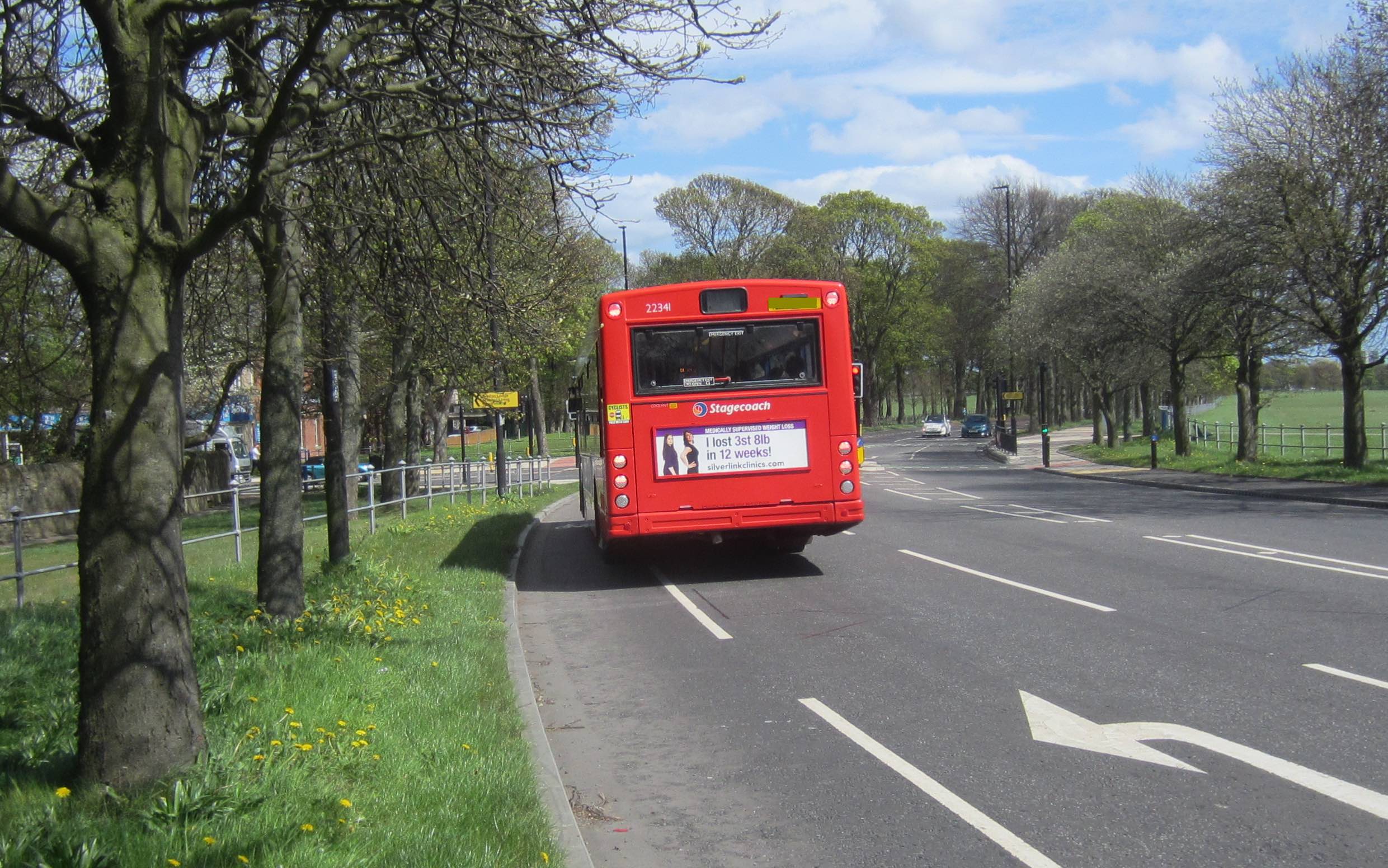 The cycle lane isn’t a lot of help for anyone wanting to turn left onto the shared path either. A better design might have allowed left turns for people cycling bypassing the traffic signals, which is the standard approach for “cycle-proofed” junctions, though this would make little difference overall.

We also saw someone heading in the opposite direction heading up Cow Hill, quite sensibly avoiding the traffic by cycling on the pavement. Although pavement cycling is not ideal, Government guidance suggests this is acceptable where cycling on the road doesn’t feel safe, as is likely to be the case for many on Grandstand Road,  so long as the person cycling also shows consideration to other pavement users. 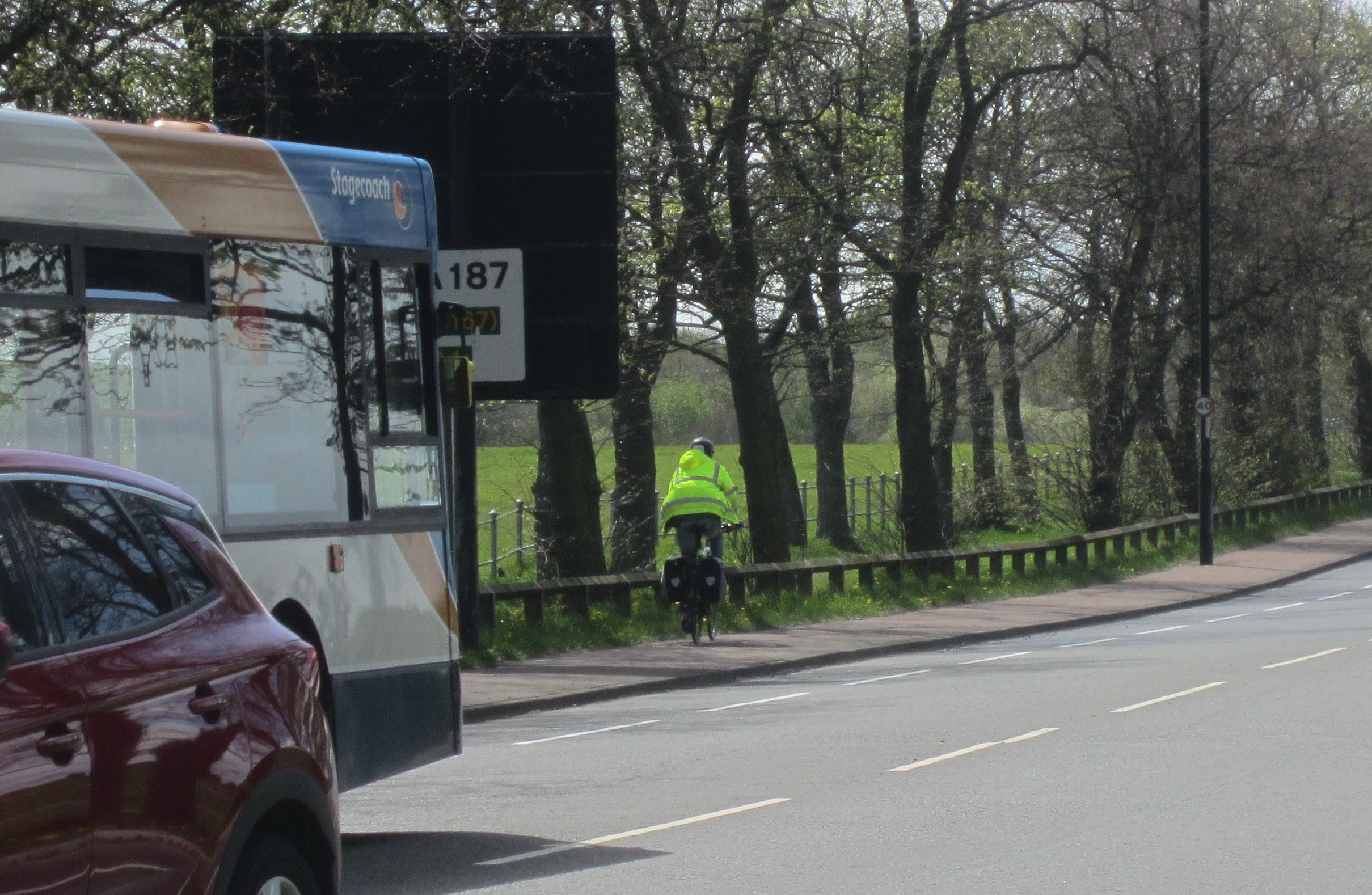 What if you don’t want to cycle or drive?

Back in 2015, in our letter to the Council about Blue House, we said Blue House should “be linked to footpaths and cycleways that traverse the length of the Northern Access Corridor from Cowgate in the west to Killingworth Road and Benton Park Road in the North so that those that wish to use this route have a full set of choices for how they do so“.

Travel planning via Google Maps shows that if you want to take public transport from Fenham to Gosforth/Haddricks Mill the only way to do so is to take two bus journeys via the centre of Newcastle, which wouldn’t be especially cheap or quick.

Actually cycling is competitive for this sort of distance, or at least would be if there was a cycling route that more people were willing to use. Whereas the bus journey is predicted to take 23 minutes, cycling is 13 minutes, car 8-18 minutes depending on traffic and 52 minutes to walk. 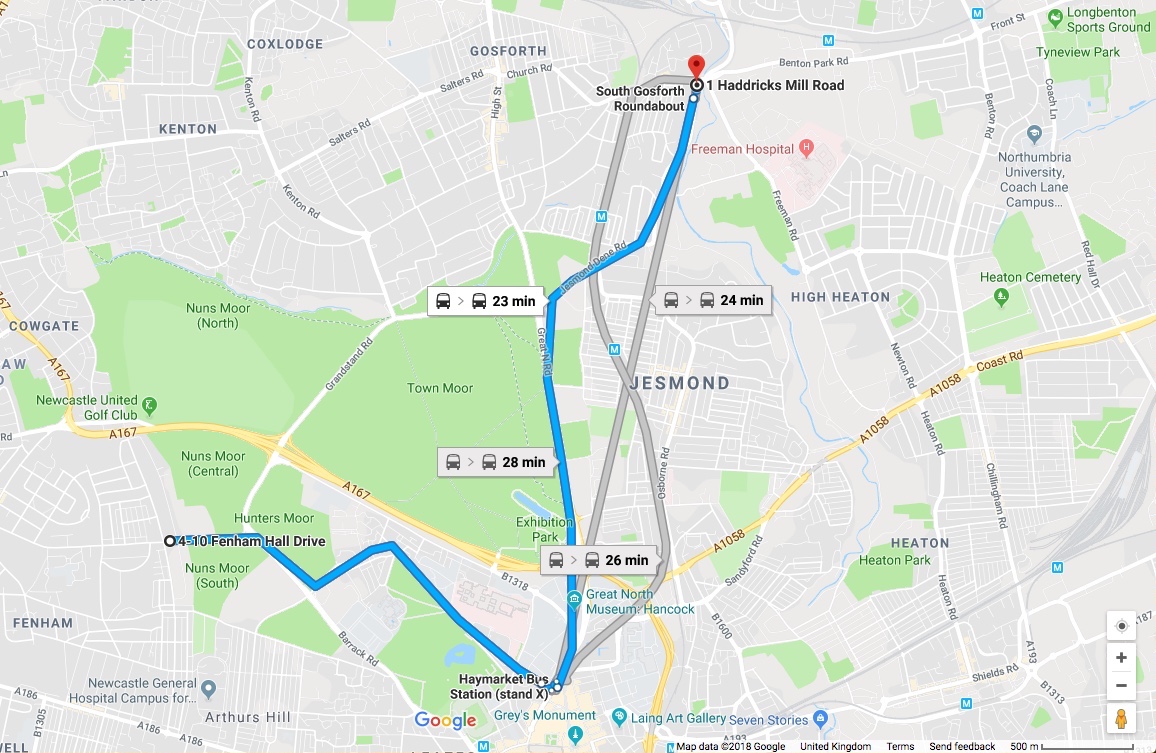 Who would use this route?

As we said on our Twitter feed back in 2017, if this route was made into a traffic-free path it could be used by children travelling from Gosforth to schools in Fenham such as Sacred Heart and St Cuthbert’s High schools. Many people will be travelling in the other direction to work in Gosforth and Longbenton.

With only one current viable travel option for most people – to drive – it is no wonder that Grandstand Road and Blue House are so busy. If we want to avoid increases in traffic here, then at the very least there need to be alternatives that give people options so they can choose to cycle or take the bus even if only for a few days each week.

The good news is that we know there is space to make a wider shared path on the Town Moor side of the road using the space that would no longer be required for the on-road cycle lanes. This would most likely also make it more pleasant for people who are walking. The Fenham side of Cow Hill already has a good quality shared path so should not require any further upgrade.

… & would really help with #BlueHouse issues especially as Fenham side of Town Moor really nice for roadside route https://t.co/LBFkRcyZt4 pic.twitter.com/gKcMjNCrTE

We hope that this simple upgrade, to enable travel between Gosforth and Fenham, can be completed as part of the overall Northern Access Corridor works that includes changes to Haddricks Mill and Blue House junctions.

Thanks to the Cycle Embassy of Great Britain for their ‘Insert loved one here‘ tool used in the title picture.