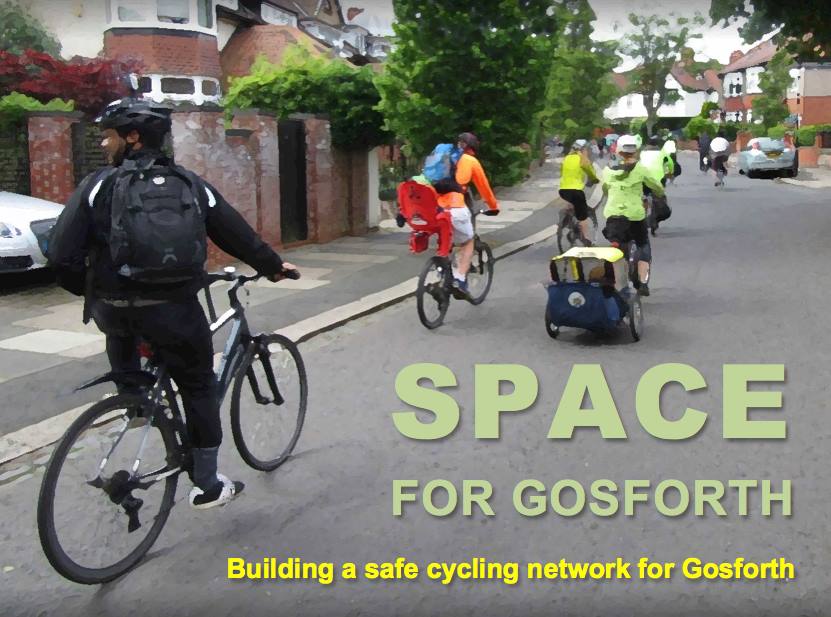 Cycling is a healthy, low cost, low impact way of travelling but currently for many people in Gosforth it is not a viable choice. Although cycling is a relatively safe activity in itself and suitable for many everyday journeys, Gosforth’s roads often feel very dangerous because they are so busy with traffic, especially at rush hour and when children are travelling to or from school.

In our post National Walking Month – May 2017 we asked you to help us document locations in Gosforth where there were issues with walking and to share ideas for how Gosforth could be improved for walking. In this post we want to do the same for cycling.

1. How Gosforth as a whole might benefit from a safe cycling network

Local authorities are required by law to “to secure the expeditious, convenient and safe movement” for cycling as well as for vehicle traffic and for pedestrians. That in itself should be sufficient to expect a safe and direct cycle network, but there are further proven benefits that mean investing in cycling facilities gives a very high return on investment compared to other road schemes. For example:

That’s not to say everyone has to cycle. Many of these benefits can be achieved even with a small shift from driving to cycling, which initially could just be from the 24% of people who cycle once a month or more in Newcastle leaving their car at home a bit more often. Allowing those who can cycle to do so takes traffic off the road that would otherwise be holding up those who do need to drive.

The key features of a good cycling network are well understood and are very similar to what is needed for a walking network.

A good quality cycling network would help prevent injuries. The map below from crashmap.co.uk shows where people cycling have been injured in Gosforth due to road traffic collisions from 2007 to 2016. 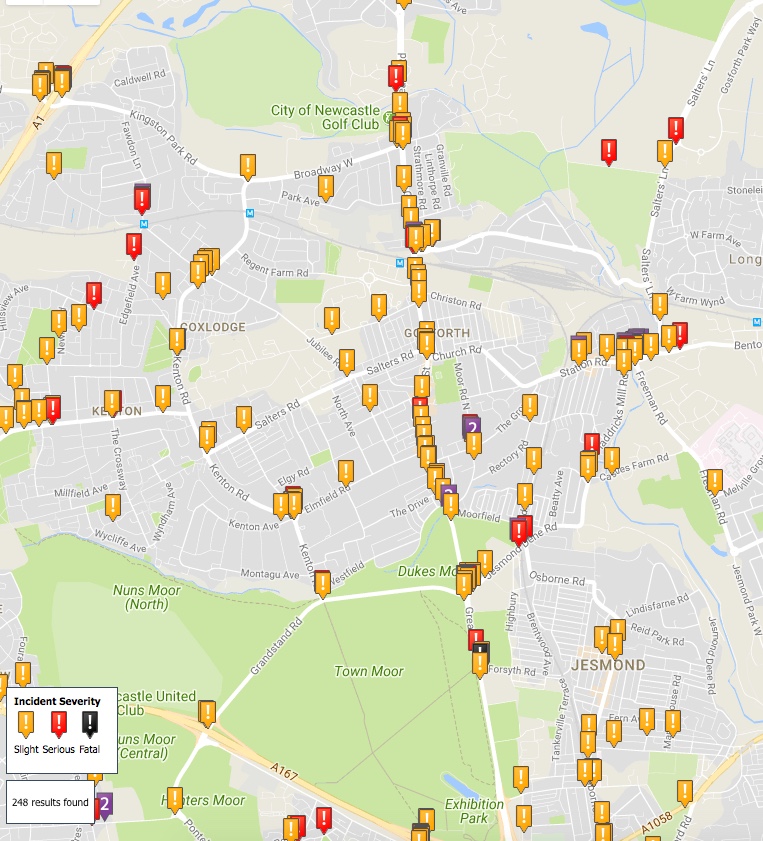 Injuries to people cycling that could have been prevented. Road Traffic Collisions 2007-2016 www.crashmap.co.uk

For any form of transport to be viable, there has to be a connected network of routes that link where people live and destinations such as schools, shops and workplaces. That is true whatever the mode of transport whether cycling, driving, walking or using public transport.

The density of a transport network – how close routes are to each other – depends on its purpose. The motorway network and national rail have just one north-south route each passing through NE England, whereas the network of pavements and paths used for walking in cities  cover almost every street.

The map below shows a view of the main local road network for vehicle traffic in Gosforth and surrounding areas. Local through roads are shown in red, which shows a density of about one road every one kilometre. Streets not marked red are typically residential areas where the function of the street is much more about the place rather than enabling through traffic. Currently many of these streets, shown in orange, are also very busy with traffic. 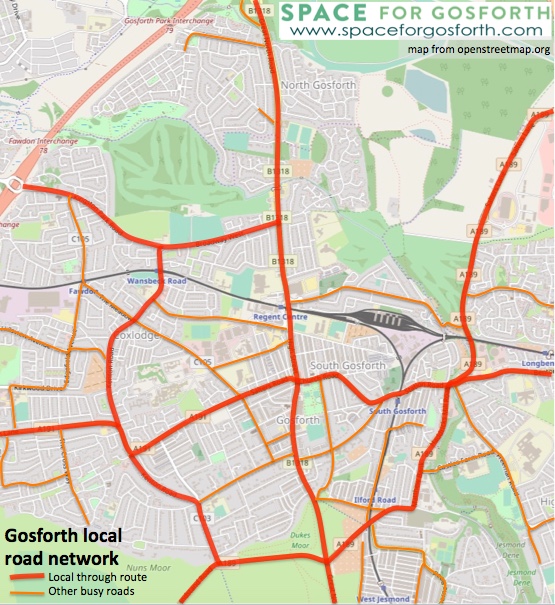 Cycle network guidance based on cities with existing high levels of cycling suggests a mesh of one route every 250m, although the Department of Transport have recommended a less ambitious target of one every 400m. As Newcastle, in common with most UK cities, currently has very little by way of a cycle network, a more realistic initial target would be for there to be one route every one kilometre, in this case similar to the local road network.

These cycle routes don’t have to follow the local road network if good alternatives are available, though they do need to meet the criteria above especially connecting homes and destinations and being direct to avoid adding unnecessary time and effort to journeys.

In our blog Lots of children want to cycle to school, but hardly any do. How do we make space for child cycling in Gosforth? we summarised what parents think would make an acceptable safe cycling route for a 12 year old cycling by themselves. Typically for main local through routes this would require physical separation from traffic. Roads with no through motor traffic were also acceptable.

This map from the Strava website shows current cycling routes used by people registered on the Strava website, with thicker lines representing higher numbers of people cycling. Almost certainly actual numbers will be higher than this as many more people will not be registered on Strava. Potentially they could be higher still if not limited by the existing road conditions, in particular where people do not feel safe cycling on Gosforth’s busy roads. Building safe cycling networks has been shown across multiple studies to increase the number of people using those routes.

4. Destinations in Gosforth where people want to travel to

Overlaying local destinations on the map it is clear that many are located on or near main roads, in particular on the Great North Road and Gosforth High Street. We listed some of the destinations for children and families on Gosforth High Street in the SPACE for Gosforth post 20 mph – the right speed for Gosforth’s children. These are the places that people want and need to go to regardless of how they travel.

Travelling on the quieter residential streets we see many people who are cycling to work, or to the shops or to meet friends.  It is also possible to avoid much of the traffic (and danger) if you know when and where to cycle, and are prepared to take longer, less direct journeys to get to your destination.

The lack of a wider safe network does significantly limit the wider take up of cycling though. From the 2015 Bike Life report for Newcastle:

If Gosforth is evaluated against the features of a good cycling network (as set out above) and the road characteristics that parents would consider to be safe for riding with their children, the conclusion can only be that currently local provision is poor.

The map below shows: 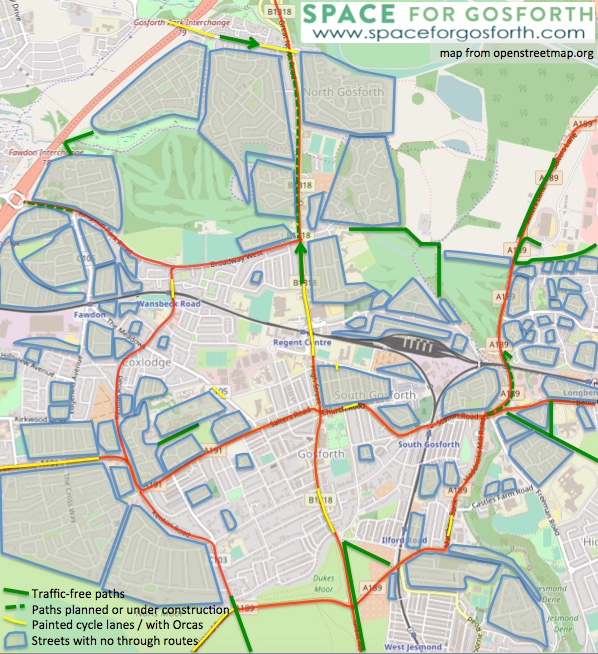 Comparing this to the destinations map it shows that most destinations in Gosforth are not served by any safe cycling route acceptable for families cycling with children. Note also that we have not included signposted cycle routes, such as Moor Road North / South, where there is no separately marked space for cycling as the signposting is not sufficient by itself to make the route suitable for families with children.

Clearly from this map there is plenty of room for improvement, both in terms of creating a safe connected network linking homes and destinations and for more immediate quick wins to connect together quieter areas or to improve safety and liveability for residential streets.

Creating a safe cycling network for old, young and everyone in between

To help with creating a safe cycling network we are looking for your thoughts about:

Please share your ideas via the comments section below or via the SPACE for Gosforth Facebook page and we will add them to our on-line map.

3 thoughts on “Building a Safe Cycling Network for Gosforth”