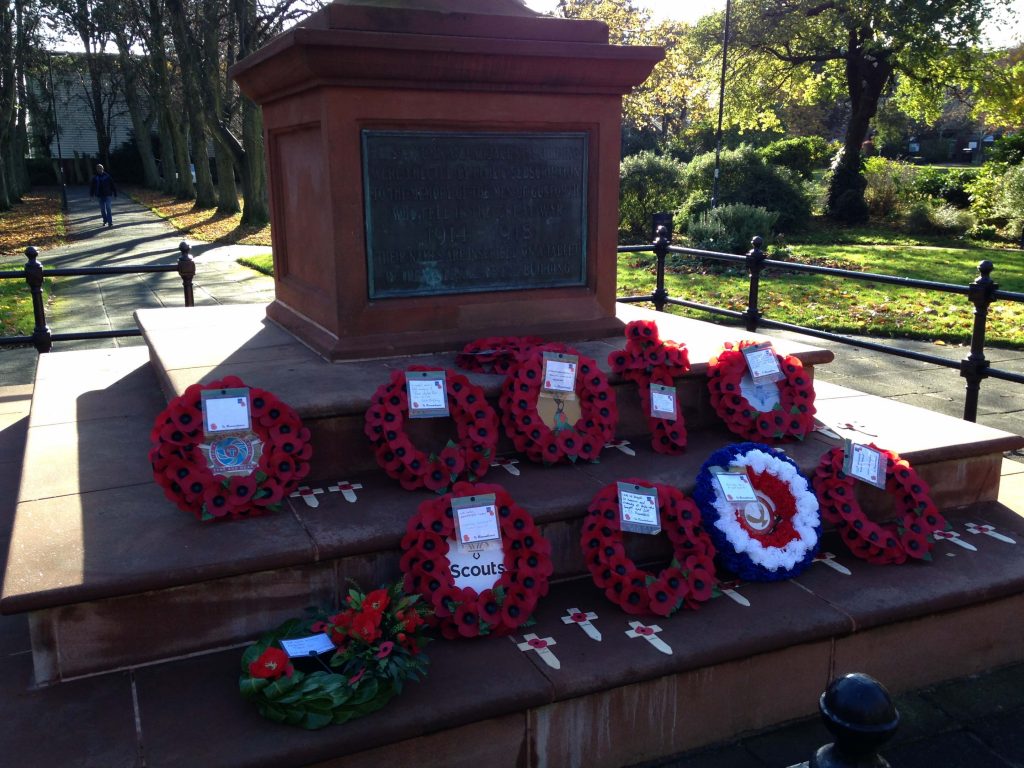 Sunday 10 November 2019 was Remembrance Sunday. As is traditional, local cadets and scouts paraded down Gosforth High Street and into Gosforth Central Park for a short service and to observe a two-minute silence in memory of members of the armed forces that lost their lives in the two world wars and later conflicts.

The Remembrance Day Service in Gosforth Central Park offers an opportunity to reflect and mourn for the past, and it is also an opportunity to pause and to examine the present.  On this occasion it also allowed us briefly the chance to see Gosforth High Street – the centre of our community – in a different way.

Usually the parade is marshalled by the Police who stop the traffic temporarily when the parade makes its way to the war memorial in Gosforth Central Park and again on the way back.  This year however Northumbria Police advised that they no longer had sufficient officers to support traffic management for Remembrance Day parades in addition to their normal duties.

A Lib Dem councillor said he found it 'very distasteful'https://t.co/hyS647Rbkc

To ensure the parade could still happen, local Councillors stepped in to pay for a private firm to do the traffic management using funds from the ward budgets. This meant that, instead of the usual temporary closures, the High Street was fully closed to through traffic from 10am until the end of the parade at around 11.40am.

In previous years, despite the road closures, traffic has still been a presence on Gosforth High Street during Remembrance Parades often with engines still running, waiting on Gosforth High Street for the temporary road closures to be lifted, as well as on Saint Nicholas Avenue next to the park entrance.  This year the air was clearer and the noise of traffic was almost completely absent, creating an atmosphere more reminiscent of the first two-minute silence a century ago on 11 November 1919, as reported by the Manchester Guardian.

“The first stroke of eleven produced a magical effect. The tram cars glided into stillness, motors ceased to cough and fume, and stopped dead, and the mighty-limbed dray horses hunched back upon their loads and stopped also, seeming to do it of their own volition.“

In 2019 at 11am on Sunday 10 November there were also no motors on Gosforth High Street to ‘cough and fume’. 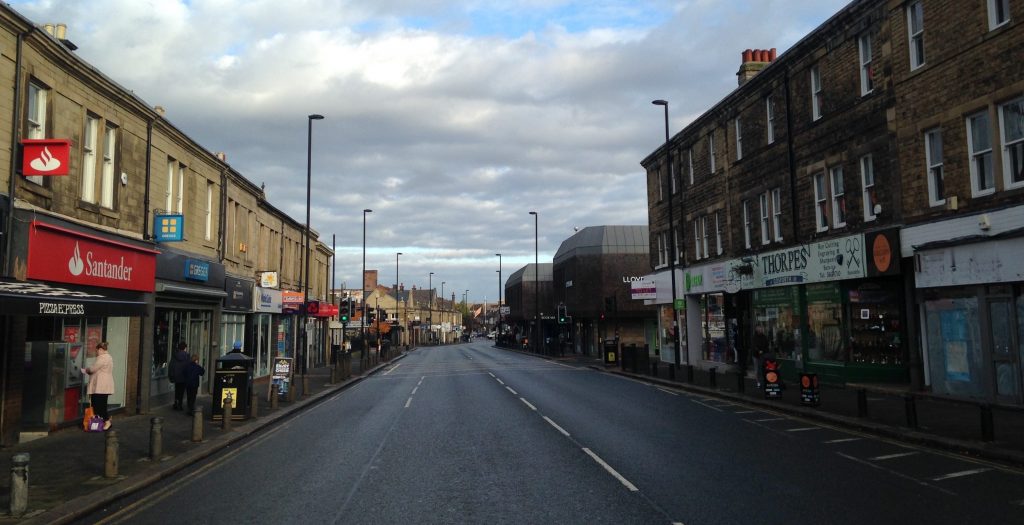 This picture above, taken before the start of the parade, gives an unusual view of Gosforth High Street without any vehicles. The atmosphere on the street was noticeably different from the normal noise and fumes from traffic, and the picture makes clear just how much of the space on Gosforth High Street is used for through traffic compared to the amount available for people to walk and visit the shops. 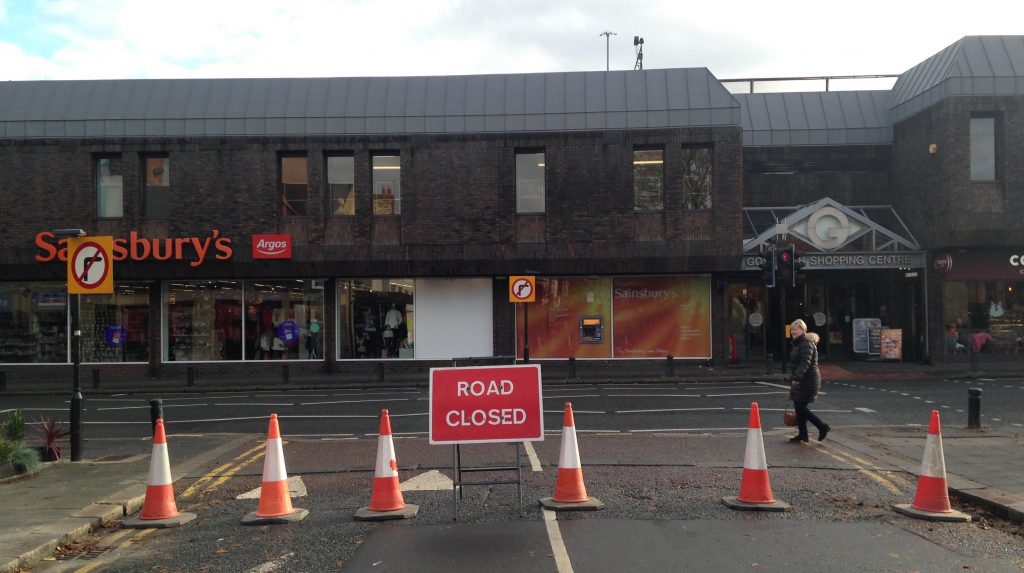 For an hour or so it was also possible to walk along Gosforth High Street without having to worry about traffic turning in or out of the many junctions, including here at the junction with Ivy Road. 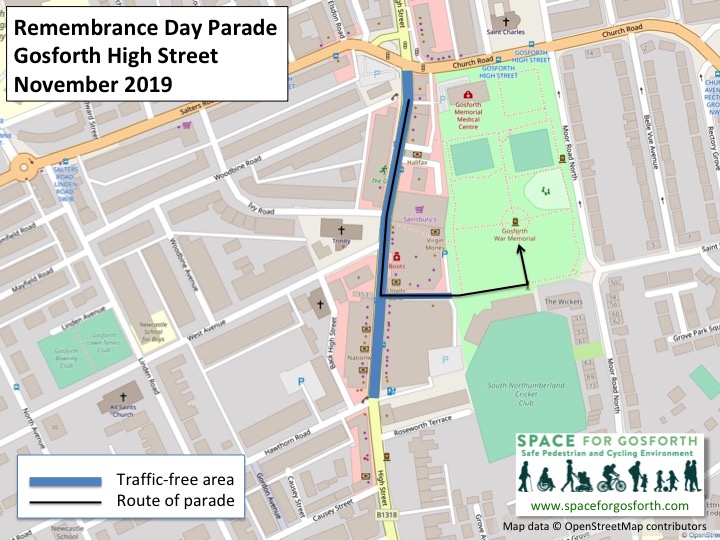 The parade started about 10.30am from Woodbine Road. Even with crowds lining the pavements, there is still lots of space on the High Street.

This is even more clear on the march back down the High Street after the service.

Thanks to Newcastle University’s Urban Observatory we can also see the impact of the temporary road closure on environmental factors such as air pollution and noise.

For air pollution the monitor opposite Trinity Church showed that at 10am, before the closure, the NO2 pollution level was about 54μg/m3, which by midday had declined to almost zero. Even in the middle of the night it is rare for the air on Gosforth High Street to be this clean.

This also supports the Department for Transport’s analysis that the vast majority of road-side air pollution is generated by vehicle traffic.

While air pollution took several hours to disperse, the impact on noise was almost immediate. Noise levels dropped from over 70 to just over 55 decibels, a level rarely achieved under normal circumstances even in the middle of the night.

Conversational speech is about 60 decibels so, for a brief period, it was possible to have a normal conversation without having to shout or being drowned out by the traffic. For the remainder of the day noise levels were between 70 and 75 decibels, about the same level as if you were stood next to a dishwasher or vacuum cleaner.

While not everyone will want to observe the two minute silence, it felt appropriate on this occasion that, for just a short period, the traffic fell silent to allow the parade to pass in safety without danger from traffic or air pollution.

For now, for the other three hundred and sixty four days and twenty two hours of the year, we will have to live with the noise and the air pollution. But now we also know that an alternative is possible, certainly for a few hours for specific events and maybe even for more permanent measures that better reflect Gosforth High Street’s role at the centre of our community.

With thanks to Friends of Gosforth Central Park, All Saints and St Nicholas churches and their combined choirs, local Scout groups, Cadets and everyone else who took part in or contributed to the parade and service.

They shall grow not old, as we that are left grow old:
Age shall not weary them, nor the years condemn.
At the going down of the sun and in the morning
We will remember them.

There is also a World Day of Remembrance for Road Traffic Victims commemorated on the third Sunday of November each year, in 2019 on Sunday 17 November, to remember those killed and injured on the world’s roads, together with their families, friends and many others who are also affected.