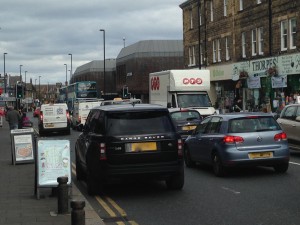 Gosforth High Street is one of the busiest, most polluted streets in Newcastle. It is also a busy shopping centre in a neighbourhood with a high proportion of families and older people – exactly those most at risk from the effects of air pollution.

There are a number of ways to deal with these risks, falling broadly into four categories:
1) Replacing or upgrading existing vehicles to run on less polluting fuels or have more efficient engines.
2) Managing traffic flow to minimise stopping and starting which burns more fuel and produces more pollution.
3) Making driving less attractive e.g. by blocking off streets for cars.
4) Encouraging alternatives such as the use of buses or cycling.

The 2015 Tyneside draft Air Quality Plan (1) gives 48 different initiatives, spread across these categories, being taken by Newcastle Council to reduce pollution. While some will be more effective than others, it is the combined effect of all these measures that will allow Newcastle to ensure air quality for its residents, to meet EU law and to avoid financial penalties.

The High Street plan also includes a mix of these measures:

Generally carrots are preferable to sticks. If we can make the cycle lane (the carrot) as attractive and as safe as possible to encourage the most people to use it then we might be able to limit further reductions in parking or higher parking fees (the sticks). If the cycle lane does not have this effect then the Government and EU law will force the Council to act and the “sticks” will be imposed anyway. Vehicle improvements need to happen as well in parallel but, as we have seen from the unfolding Volkswagen news story (2), it may not be wise to rely on this for an immediate solution.

Pollution has the worst effect on the old and young, but no-one is immune. If we want our High Street to be safe for our families, our friends and our neighbours, this is our opportunity.