Newcastle has suffered from illegal levels of air pollution for many years. In this Air Quality Timeline we trace the developments that enabled a massive growth of traffic in the city and the lack of action that means we still suffer from poor air quality today. 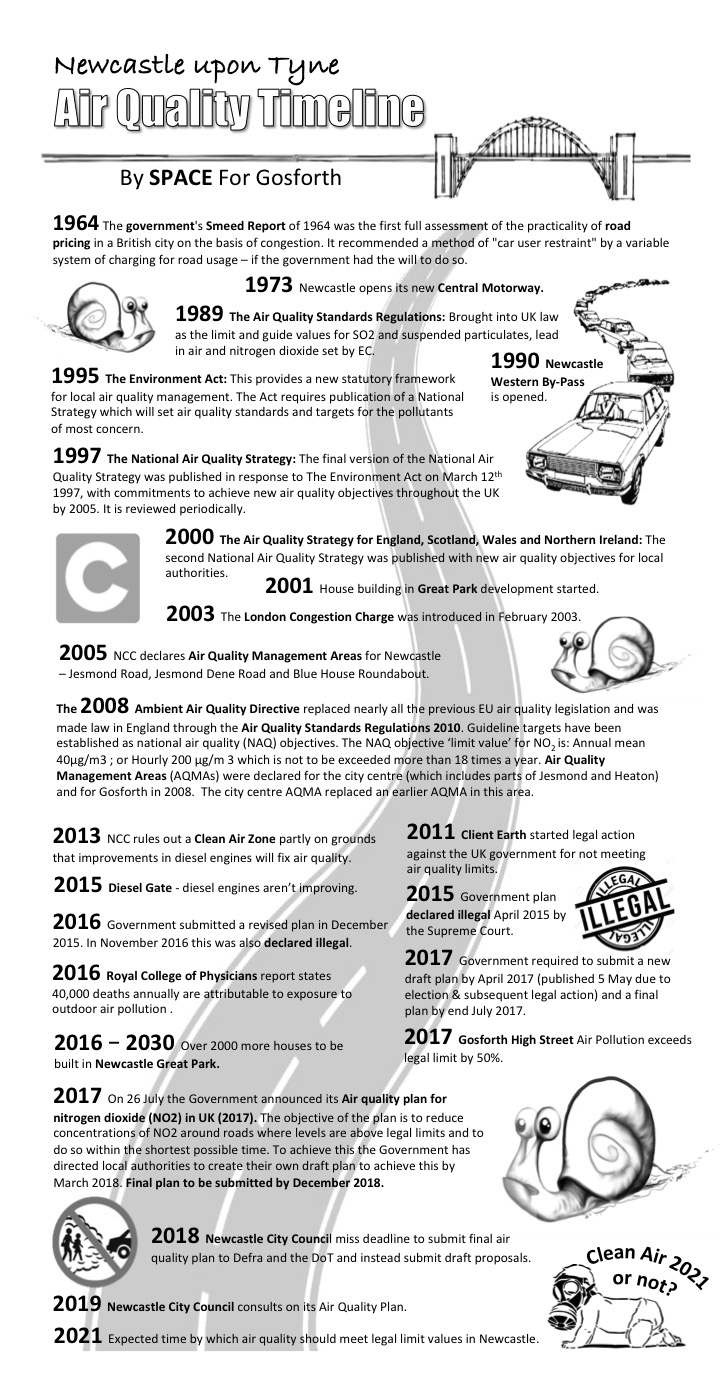 1964 The government’s Smeed Report of 1964 was the first full assessment of the practicality of road pricing in a British city on the basis of congestion. It recommended a method of “car user restraint” by a variable system of charging for road usage – if the government had the will to do so.

1989 The Air Quality Standards Regulations: Brought into UK law as the limit and guide values for SO2 and suspended particulates, lead in air and nitrogen dioxide set by EC.

1995 The Environment Act: This provides a new statutory framework for local air quality management. The Act requires publication of a National Strategy which will set air quality standards and targets for the pollutants of most concern.

2003 The London Congestion Charge was introduced in February 2003.

The 2008 Ambient Air Quality Directive replaced nearly all the previous EU air quality legislation and was made law in England through the Air Quality Standards Regulations 2010. Guideline targets have been established as national air quality (NAQ) objectives. The NAQ objective ‘limit value’ for NO2 is: Annual mean 40μg/m3 ; or Hourly 200 μg/m 3 which is not to be exceeded more than 18 times a year. Air Quality Management Areas (AQMAs) were declared for the city centre (which includes parts of Jesmond and Heaton) and for Gosforth in 2008.  The city centre AQMA replaced an earlier AQMA in this area.

2013 NCC rules out a Clean Air Zone partly on grounds that improvements in diesel engines will fix air quality.

2016 Government submitted a revised plan in December 2015. In November 2016 this was also declared illegal.

2017 Government required to submit a new draft plan by April 2017 (published 5 May due to election & subsequent legal action) and a final plan by end July 2017.

2017 On 26 July the Government announced its Air quality plan for nitrogen dioxide (NO2) in UK (2017). The objective of the plan is to reduce concentrations of NO2 around roads where levels are above legal limits and to do so within the shortest possible time. To achieve this the Government has directed local authorities to create their own draft plan to achieve this by March 2018. Final plan to be submitted by December 2018.

2021 Expected time by which air quality should meet legal limit values in Newcastle.

3 thoughts on “Fixing Air Pollution – at a Snail’s Pace”