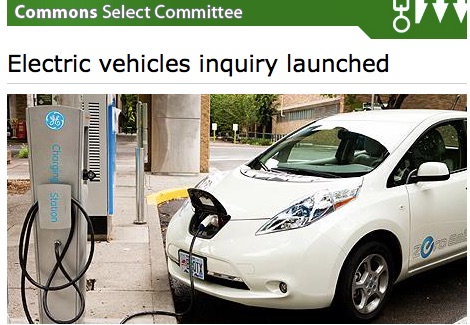 In March 2017, the Business, Energy and Industrial Strategy (BEIS) Committee launched an inquiry into Electric Vehicles.  The inquiry was to examine the barriers to the development of the electric vehicle market and what support this emerging market might need.

The committee invited submissions of written evidence.  SPACE for Gosforth decided to submit written evidence as we wanted to ensure that the inquiry considered electric bicycles (“E-bikes”) as well as electric cars and other vehicles (“electric vehicles”).

We also wanted to make sure that the effect that electric vehicles will have on pollution was examined.  In general terms, SPACE for Gosforth welcomes the switch from petrol and diesel engines to electric ones as these will reduce some forms of pollution, particularly greenhouse gas emissions, noise and local oxides of nitrogen (NOx) air pollution.  NOx includes nitrogen dioxide – illegal levels of this pollution in Newcastle upon Tyne led to the creation of both the South Gosforth and the City Centre Air Quality Management Areas. 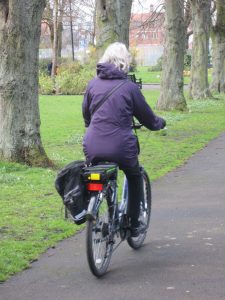 Electric bike being tested in Gosforth

However, a switch to electric vehicles will not bring about a reduction in particulate air pollution (which our monitoring suggests may also be an issue in Gosforth) nor other problems related to car use such as excess delays, accidents and physical inactivity.

Consequently SPACE for Gosforth considers that while the switch to electric vehicles is welcome, it does not replace the need for a shift in transport from people using cars to active modes of transport (such as walking and cycling) and to public transport.  SPACE for Gosforth therefore wished to submit that initiatives to encourage the use of electric vehicles must not undermine the take-up of these alternative, and more sustainable, forms of transport.

In contrast, an uptake in the use of E-bikes would 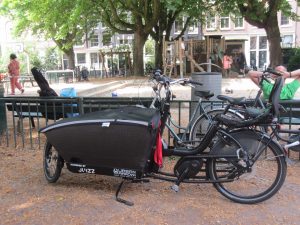 SPACE for Gosforth particularly wished to draw the committee’s attention to two benefits of E-bikes: firstly they can enable people to stay active in later life as the assistance of battery power means that people who are unable to ride a standard bicycle, for example due to ill health, may be able to ride an electric one.  The second advantage is that E-bikes have considerable potential for increasing the amount of freight delivered by bicycle, which could be particularly useful in areas such as Grainger Town and the rest of the City Centre where there is a need to reduce traffic on major access routes such as the Tyne Bridge.

SPACE for Gosforth wanted to particularly make this submission as we were concerned that the Government’s Industrial Strategy did not sufficiently address the opportunities offered by  E-bikes, nor did it recognise the wide range of benefits that result from investment in cycling infrastructure, and that these schemes offer very high value for money. 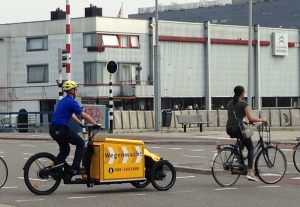 We have also been delighted to note Transport Minister Jesse Norman MP has recently confirmed to the Guardian newspaper that a subsidy for the purchase of E-bikes “could happen”.  Norman particularly noted in this interview one of the two advantages of E-bikes that we put forward in our submission: the potential of E-bikes to be used for freight transport.

We also welcome the ambition that Jesse Norman MP stated in this interview – to “make the transition to a world where a 12-year-old can cycle safely”.  However we were disappointed to note that Norman said he could not promise extra funding for cycle routes.  Despite this Jesse Norman MP did say in this interview that Central Government could start pushing councils to build more cycle routes – and with the recent reported rise in air pollution in both the South Gosforth and City Centre Air Quality Management Areas we hope Central Government will take this action soon.

As well as taking written evidence, the inquiry also held oral evidence sessions to explore topics in more depth. One of the questions asked was about the potential conflict of priorities: EVs versus access, broadening pavements, encouraging cycling and walking. However, there was no real discussion in the session of the impact that the placement of on-street EV charging stations could have on pedestrians, so we submitted additional evidence to the inquiry on this topic in May 2018.

Our key point is that as we install infrastructure to encourage EV use over more polluting vehicles, we should ensure that pedestrians in particular are not adversely affected through poor placement of charging stations. EVs will bring some benefits to cities, but it should not come at the expense of people more generally or the quality of the urban realm.  For these reasons, recharging equipment should be placed so that it does not impinge upon safe and convenient movement of pedestrians on the pavement, should avoid placement on the pavement and avoid any trip hazards due to trailing cables when in use. Ideally charging equipment should be placed in the carriageway, not on the pavement. You can see below the evidence we submitted on this topic, including a range of photographs on different placements of EV charging stations.

The output from the Inquiry, delayed by the 2017 General Election, will be published on the Parliament Inquiry Page when complete. 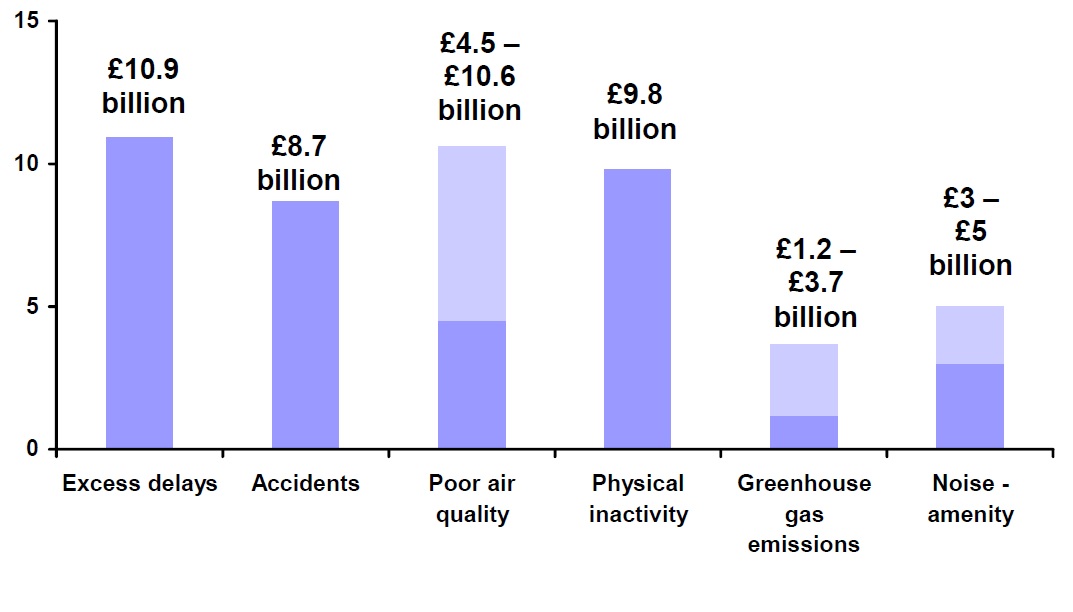 Fig 1: Comparison of the wider cost of transport in English urban areas (£ billion per annum, 2009 prices and values) 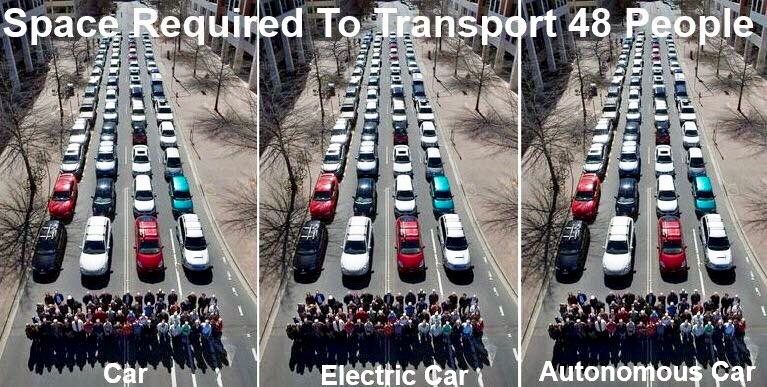 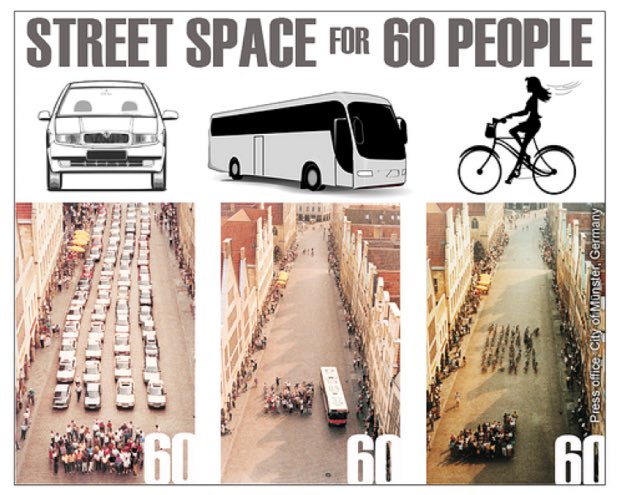 Fig 3: How modal shift makes better use of road capacity and parking space

What are the key barriers to development of the UK’s electric vehicle market?

Does the Government’s Industrial Strategy sufficiently address the challenges and opportunities for electric vehicles?

What support for purchase costs should the Government provide after 2018, in response to the changing costs of electric vehicles?

How best can the Government ensure that there is consistent provision of charging infrastructure across the country?

Is the Government’s road transport decarbonisation strategy sufficiently flexible to adapt to potentially disruptive market trends such as driverless cars? How might these impact requirements for, and use of, charging infrastructure?

Additional written evidence on the placement of on-street EV charging stations, submitted by SPACE for Gosforth to the Business, Energy and Industrial Strategy Committee inquiry “Electric vehicles: developing the market and infrastructure”

“Street design should be inclusive. Inclusive design means providing for all people regardless of age or ability. There is a general duty for public authorities to promote equality under the Disability Discrimination Act 2005. There is also a specific obligation for those who design, manage and maintain buildings and public spaces to ensure that disabled people play a full part in benefiting from, and shaping, an inclusive built environment. Poor design can exacerbate the problems of disabled people – good design can minimise them.”

“Obstructions on the footway should be minimised. Street furniture is typically sited on footways and can be a hazard for blind or partially-sighted people”

“Streets where people walk in groups or near schools or shops, for example, need wider footways. In areas of high pedestrian flow, the quality of the walking experience can deteriorate unless sufficient width is provided”

“Although much street furniture is provided for the benefit of motorised users, it is generally located on the footway and can contribute to clutter. In some circumstances, it may be possible to reduce footway clutter by placing some of these items on build-outs”.

Example 1: The slalom and narrowing of the available pavement makes this particularly problematic for people walking, especially those with wheelchairs or buggies (photo @k9) 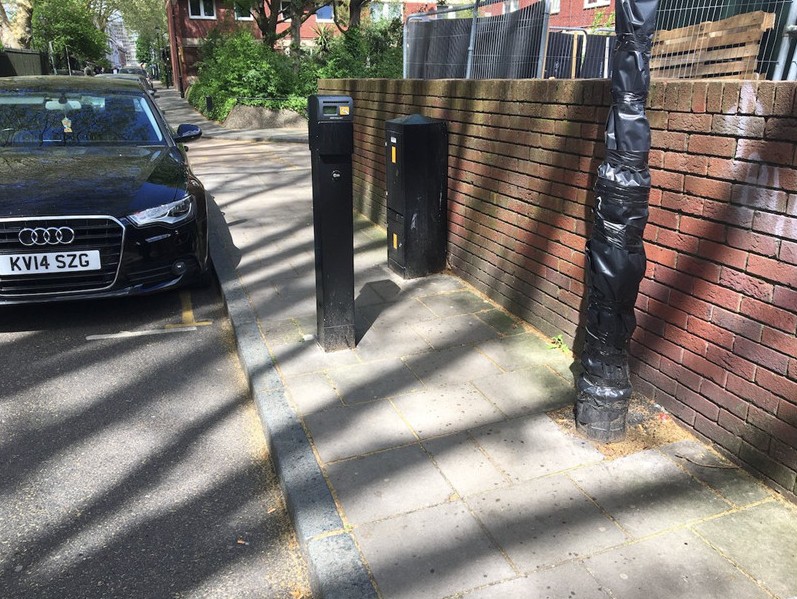 Example 2: placement taking space away from people who walk, affecting families and others who walk in groups (photo @chriscities) 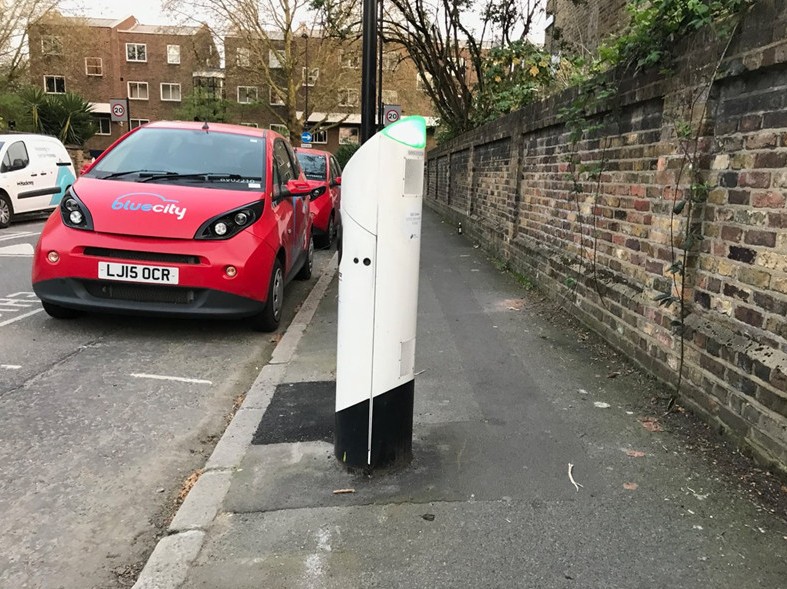 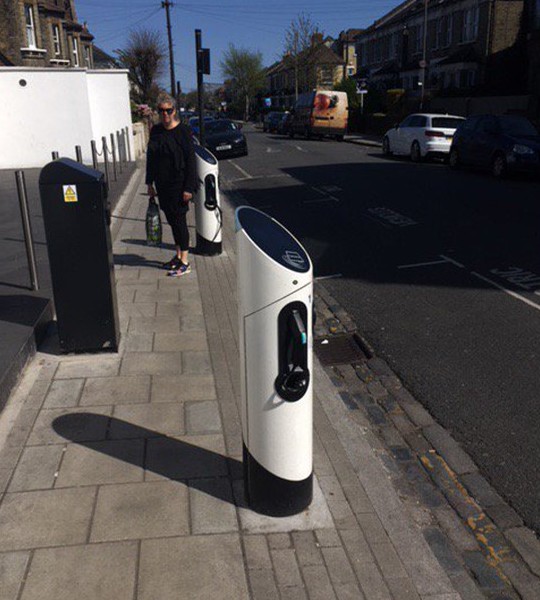 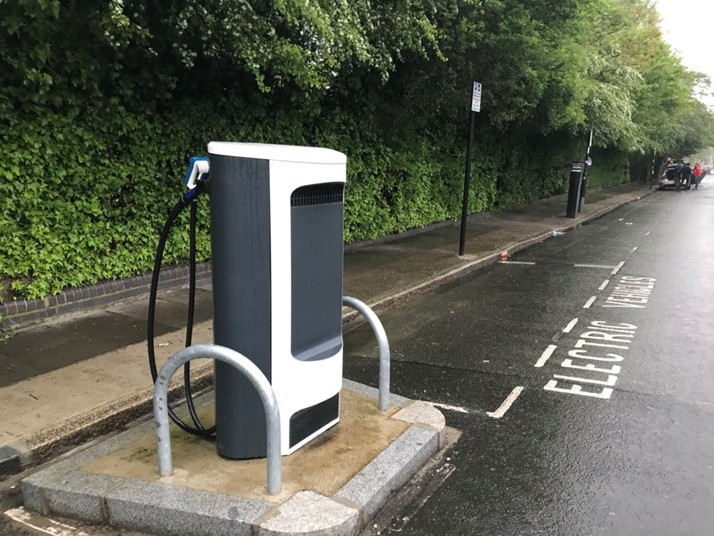 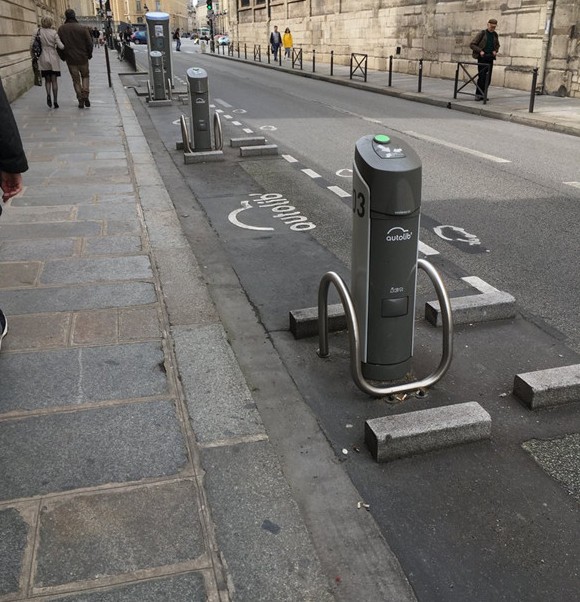 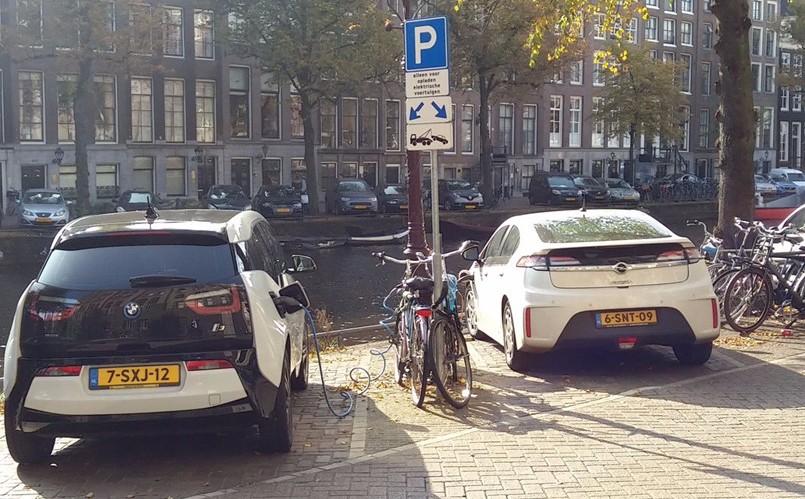