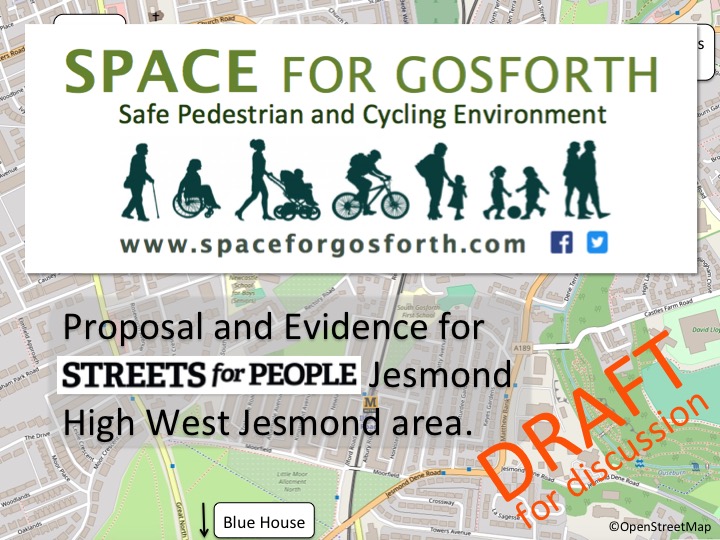 Earlier this year, Newcastle City Council updated its proposals for High West Jesmond as part of the overall Jesmond Streets for People plans. The council signalled that it was considering other options for how the budget might be used to improve walking and cycling.

The new plans published in March are set out on the High West Jesmond Residents’ website. This blog is about SPACE for Gosforth’s input to the process, which was shared with the Council at the end of March 2019. The original scheme is (at the time of writing) still available on the Streets for People website.

In this proposal we have considered a wider area bounded by Gosforth High Street, Church Road/Station Road and Haddricks Mill Road/Jesmond Dene Road, rather than just High West Jesmond. Looking at one area in isolation would have the potential to push traffic onto other residential streets, whereas looking at a wider area helps to avoid this.

We are sharing this as a draft and would welcome any feedback on the proposal itself and on the approach taken, which we have explained below. Although we don’t have detailed costings, our belief is that what we have proposed would lead to much greater benefits over a wider area at a much reduced cost, and at the same time would minimise the impact on residents who do need to drive for some journeys.

The Streets for People project overall aims to enable more people to walk and cycle in three areas, each of which has a budget of £1m funded by a grant from the Department of Transport’s Cycle City Ambition Fund. 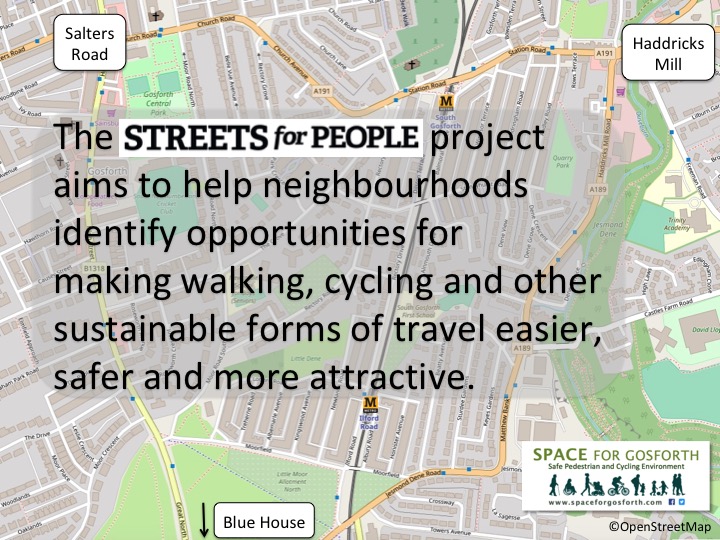 The Council’s new proposals retain the cycle lane on Ilford Road between Moorfield and Jesmond Dene Road but other than that seem to have little benefit for walking or cycling. We were surprised the Ilford Road cycle lane was included in the Streets for People proposals as it was part of the recommendations from the Blue House working group so we expected it would be funded from that budget rather than diluting the Streets for People funding.

The other new proposals were to include speed bumps on Moorfield and at the junction with Ilford Road and continuous pavement on the north side of Moorfield. Based on experience elsewhere in Gosforth (Hollywood Avenue, Regent Farm Road), we wouldn’t expect speed bumps by themsleves to make any great difference to the liveability or safety of the street. Continuous pavement is usually used along main roads so may have the opposite effect and encourate people to believe that Moorfield is to be used as a main road for through traffic.

There is a reasonable amount of data to describe issues in the area east of Gosforth High Street, including high or illegal levels of air quality on the surrounding main roads, and high volumes of traffic, much of which is speeding, on residential streets. 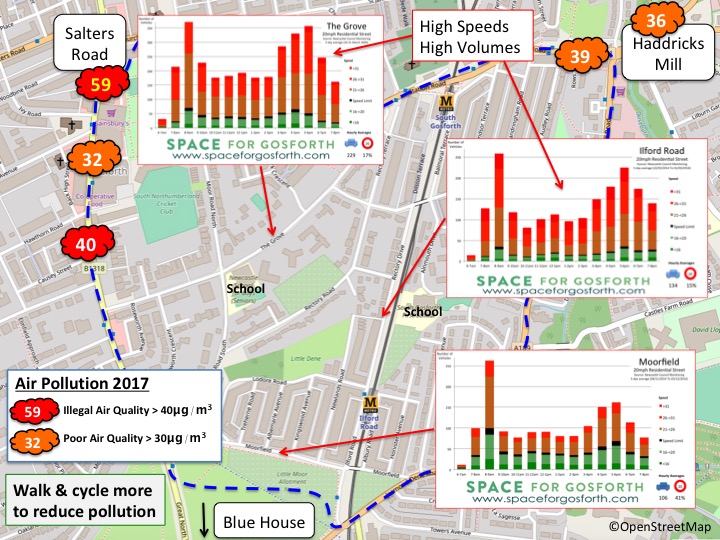 This data is backed up by comments shared by residents during the Streets for People and Local Cycling and Walking Infrastructure Plan (LCWIP) consultations. Ilford Road, Moorfield and Moor Road South are frequently mentioned as problem streets with high traffic volumes and speeding. 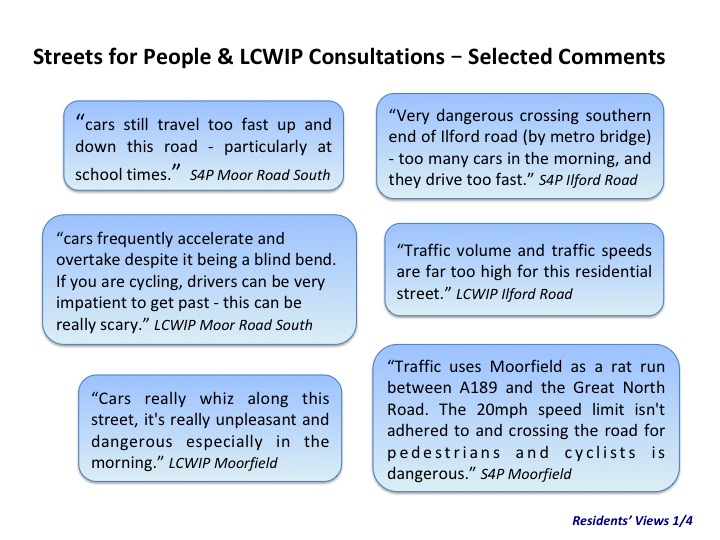 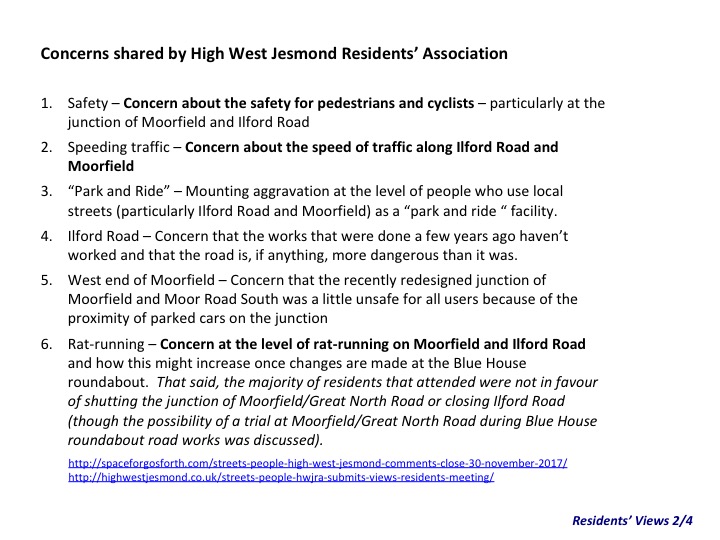 These broadly align both with the data and LCWIP / Streets for People consultation feedback.

The idea of a trial also makes sense as that would allow residents to evaluate changes to determine if concerns will be realised or if proposals might be improved prior to more permanent implementation.

We also have data from the SPACE for Gosforth Your Streets – Your Views survey, which gives an  indication of what people will support and shows that reducing through traffic and safe walking and cycling routes to schools could be popular. 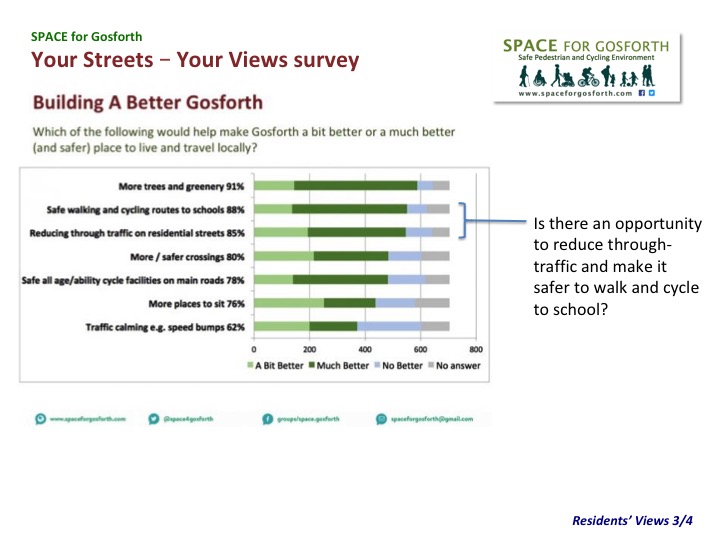 Separately, we know local Councillors support similar aims, below from the 2018 local Council elections. These include the option to trial interventions. 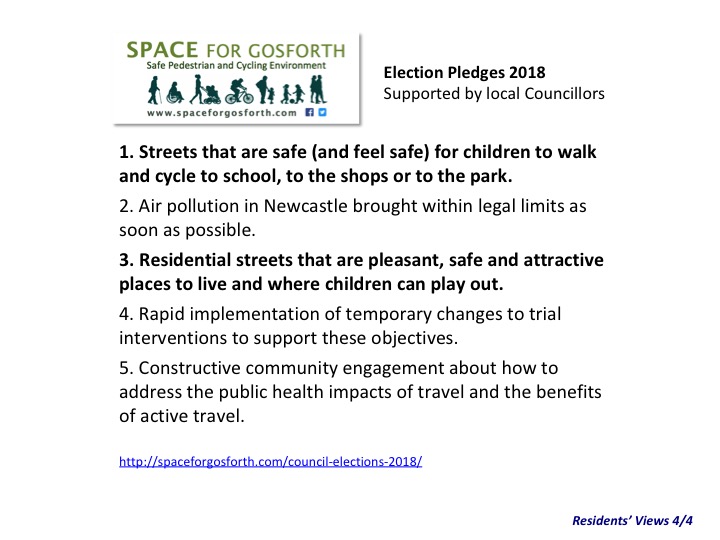 Bringing these together we can come up with some objectives for this proposal before even looking at what measures might be implemented. 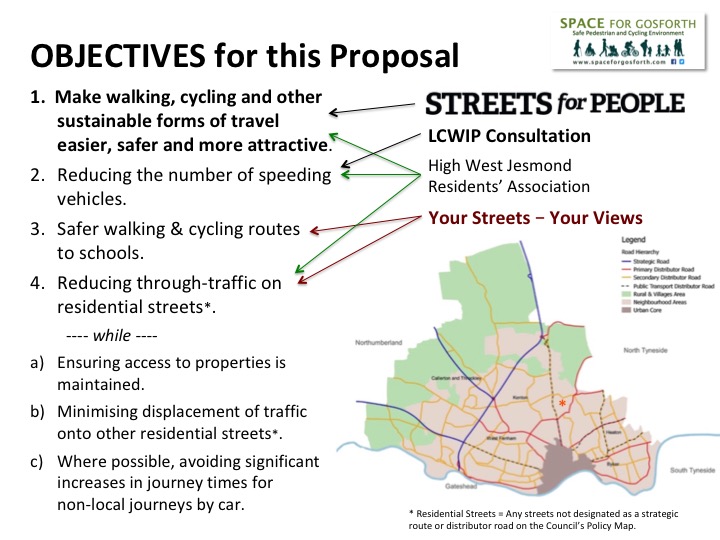 So, for this proposal we are aiming to meet the Streets for People objectives, reduce speeding traffic, make it safer to walk and cycle to schools and reduce traffic on residential streets.

We have also noted concerns about displacing traffic on to other residential streets and longer journey times by car.

By residential streets we mean streets that enable access to people’s homes but aren’t designated for through traffic. In the map above red lines show the routes of ‘primary distributor’ roads for through traffic including Jesmond Dene Road and Haddricks Mill Road. Orange lines show ‘secondary distributor’ roads including Gosforth High Street, Church Road and Station Road. These define the boundary of the area we are looking at, which goes beyond the current scope of Jesmond Streets for People but needs considering as one.

None of Moorfield, Moor Road North or South, Ilford Road or The Grove are designated for through traffic but all carry relatively high volumes of vehicles, many of which are currently using those streets as if they are main roads.

Looking at a map of this area, it is noticeable how the area is already split by the Metro line and an east-west line including The Valley and the grounds of South Gosforth First School. Travel between these areas is limited to one or two options whether you are walking, cycling or driving. 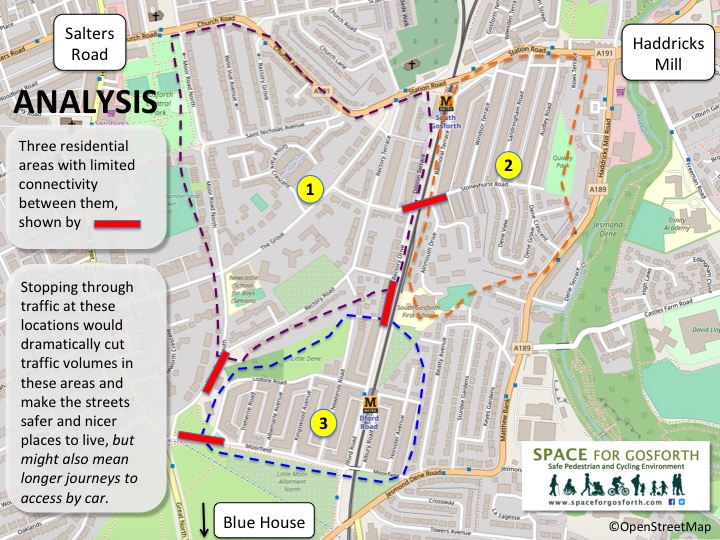 To help with the analysis we have split the area into three sub-areas each with limited connectivity to the other. So, High West Jesmond forms one of these areas connecting north via either Moor Road South or Ilford Road.

We haven’t included areas west of Moor Road or The Admirals (Beatty Avenue, Sturdee Gardens, Keyes Gardens) as these are already quiet streets with little through traffic. 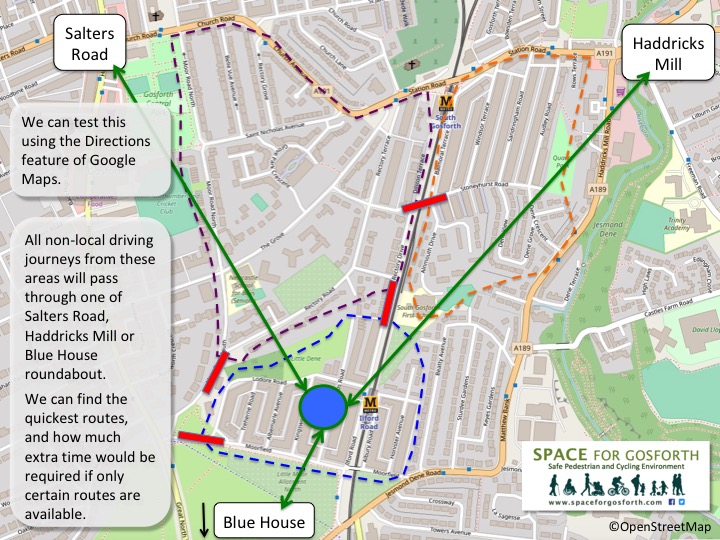 For each of these areas we have used Google Maps directions to determine how long it would take to travel to Blue House, Haddricks Mill and to the High Street / Salters Road junction, and what options there are for routes. All journeys to or from the area by car would have to go through one of these junctions. 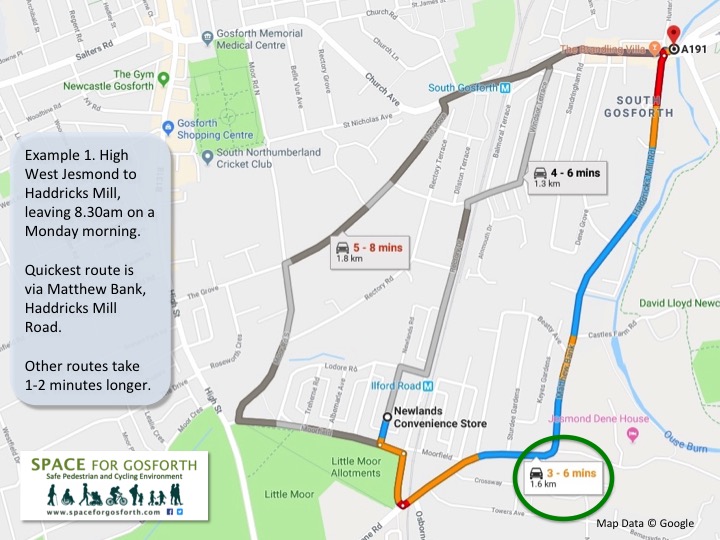 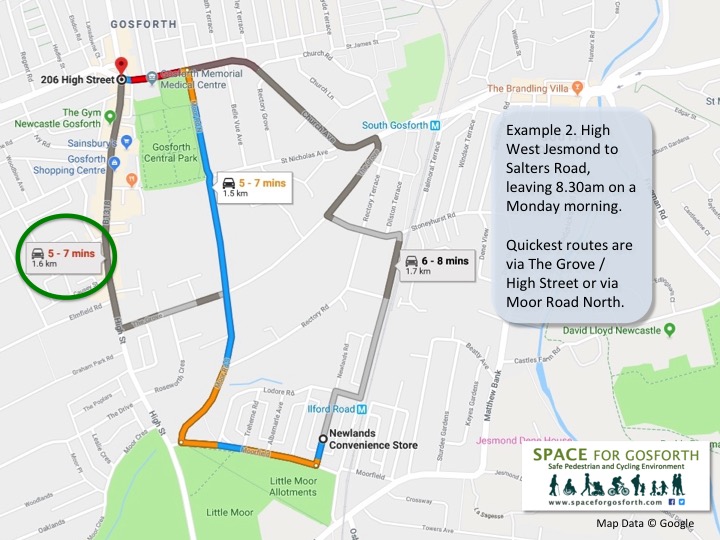 In the other direction, the quickest route calculated at 5pm on a Monday afternoon is via Blue House roundabout. 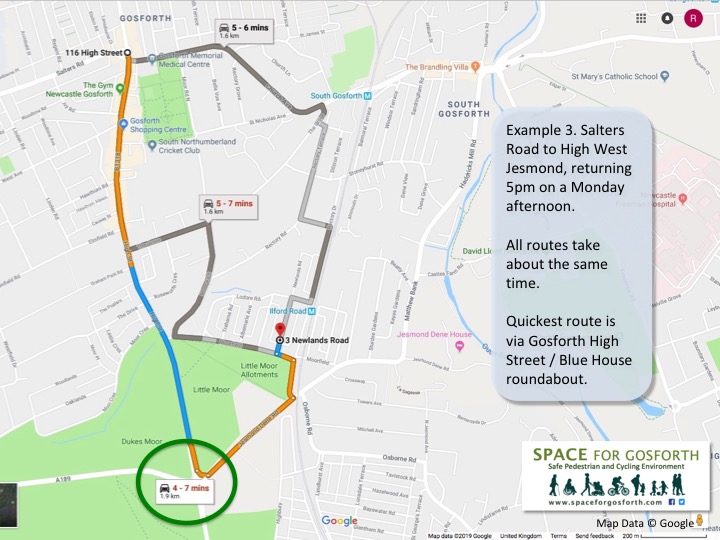 Using these calculations and a few others not shown, we can determine the quickest vehicle routes to and from High West Jesmond. These do not require the use of Ilford Road and only use Moor Road South in a northerly direction. 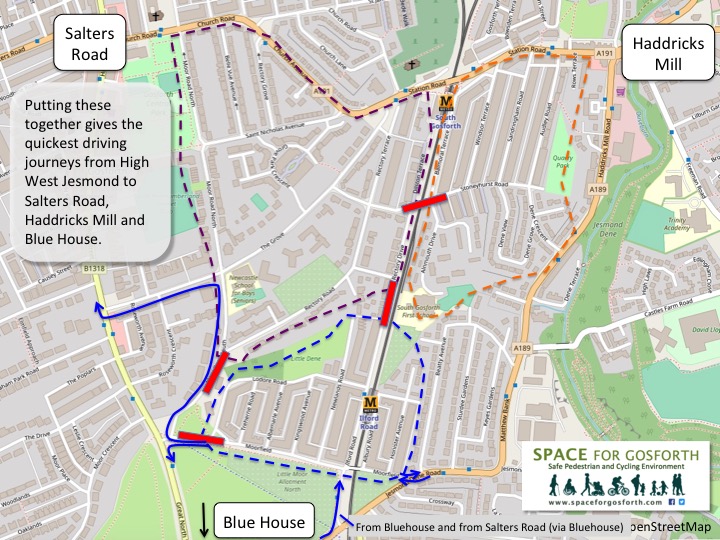 The map belows shows what happens when the same analysis is repeated for the areas marked out by purple and orange dashed lines. From the purple area the quickest car journeys are via Church Road/Church Avenue/Station Road to the High Street and Haddricks Mill, and to Blue House via The Grove. The orange area is the same except that the quickest journey to Blue House is via Haddricks Mill Road. 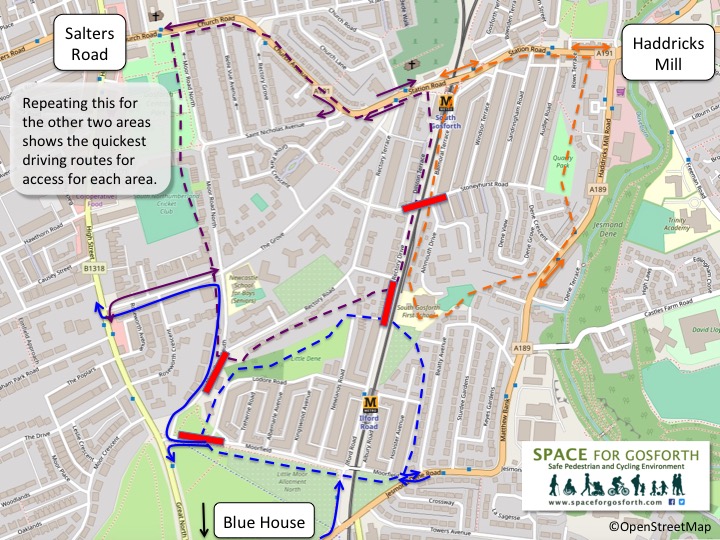 Having completed this analysis we can draw some conclusions. 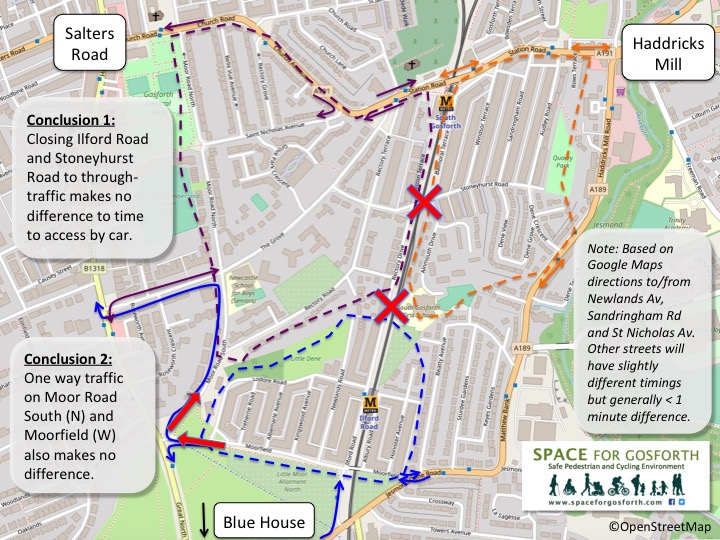 Continuing the analysis, making the southern end of Moor Road North south-bound only where it meets The Grove would stop north-bound traffic using Moor Road North as an alternative to the High Street, again without impacting journey times. Residents returning to St Nicholas Avenue, Belle Vue Avenue and Rectory Grove from Blue House can travel via the Grove / Church Avenue. 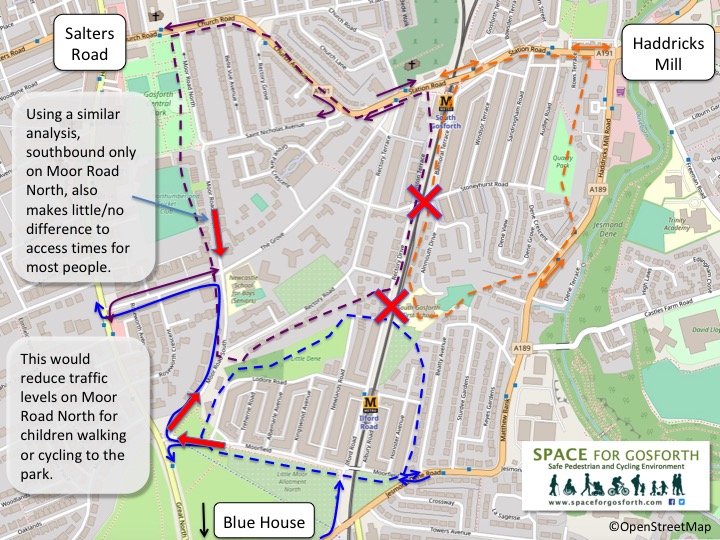 Making these changes would dramatically reduce the amount of traffic on the estate while making very little difference to journey times by car for residents. The one exception would be The Grove but this could be closed to through traffic between Grove Park Crescent and Stoneyhurst Road West. In this case residents of St Nicholas Avenue, Belle Vue Avenue and Rectory Grove would use Grove Park Crescent to access their properties. Although this would displace some traffic to Grove Park Crescent it is likely to be fairly small.

Reducing through traffic also makes the roads safer and more pleasant for walking and cycling, and safer for children travelling to local schools. 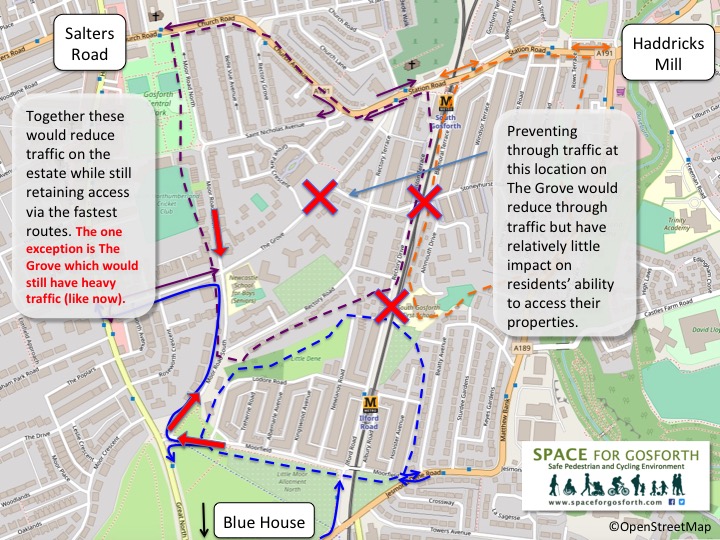 Clearly any analysis like this won’t capture every consideration, but that doesn’t mean it isn’t worth trying. We would also like your feedback, as described at the end of this blog, to help us refine and improve this proposal if possible.

We would also propose stopping through traffic at the Stoneyhurst Road Metro bridge on a similar basis along with a “school street”  on Alnmouth Drive to further improve safety for children travelling to and from school. 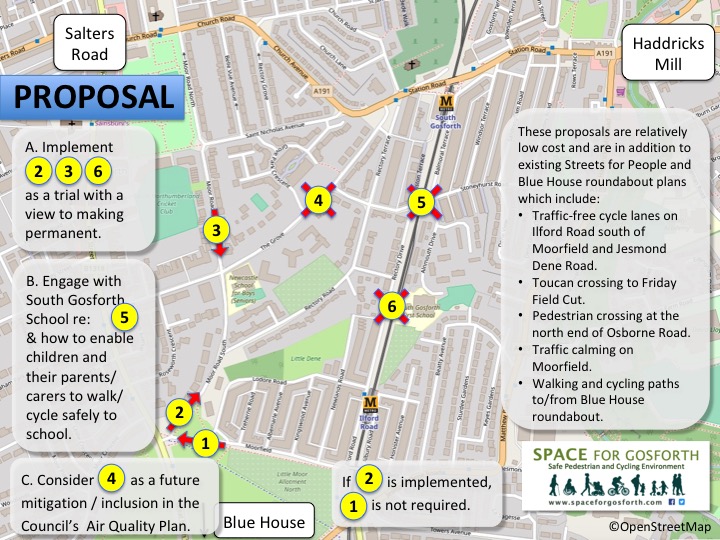 Possibly some of the traffic that was using residential streets might re-route via the local main road network, but given closing Killingworth Road didn’t lead to an increase in traffic on The Great North Road nor Benton Lane, the impact is likely to be minimal.

While any initial implementation is likely to use temporary materials to confirm the approach works, longer term we hope the closures might be used to introduce more greenery. A good example of how this has been done is at Ampton Street nor far from Kings Cross Station, where part of the road has been replaced by gardens with planting and seats. 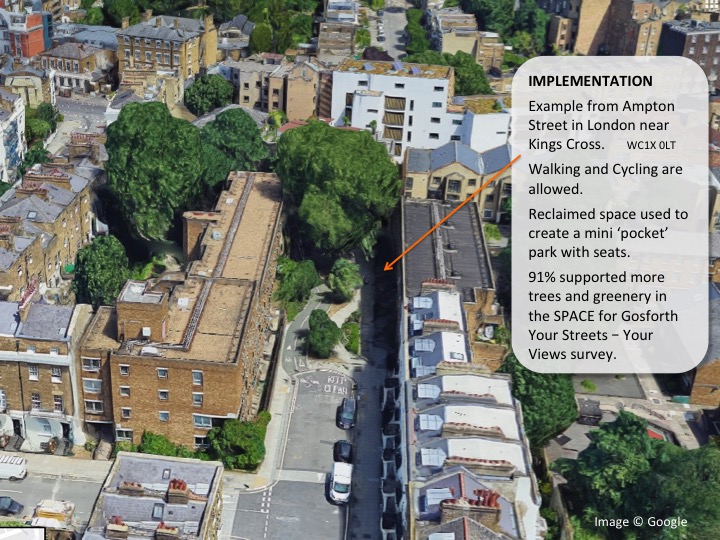 Looking back at the objectives, we think this proposal would do what we set out to achieve. With less traffic, local streets become quieter and more liveable and better for walking and cycling. A similar scheme at Waltham Forest resulted in increased levels of walking and cycling, and is expected to lead to substantial health benefits for those living in the area. 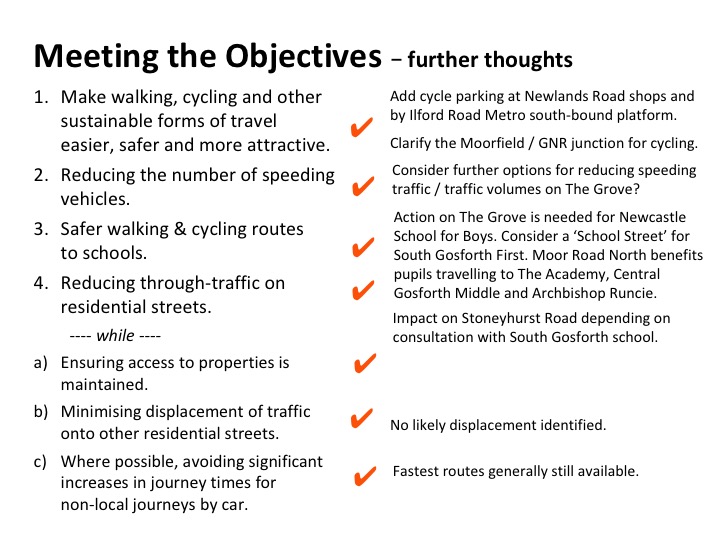 That’s our view but we would like to hear your feedback as well. Specifically: