Newcastle City Council has just published its draft Development and Allocations Plan, which is the second part of the local plan that, with the first part The Core Strategy and Urban Core Plan, will guide how the city is to be developed up to 2030.

The new plan sets out policies for Economic Prosperity, Homes, Transport and Accessibility, People and Places, Minerals and Waste, and Infrastructure and Delivery. One aspect of People and Places is Open Space and in this blog we want to look at the proposals for protecting Open Space.

In the old UDP Policies that include the current Open Space protections, there is a list of sites that are protected through the policies where the policies state development ‘will not be allowed’.

The new Open Space policy standards have ‘quantity standards’ which set out the amount of open space that should be provided per 1000 people. Anything over that will be considered surplus and therefore can be developed providing there is no conflict with other policies, for example relating to nature or wildlife. Using these standards for parks and for amenity green spaces, which are smaller more informal open areas, we have derived the following graph that shows how much surplus Open Space there is by ward according to the new standards. In total we believe approximately 93 hectares, equivalent to 130 football pitches, is at risk as a result of the new standards. 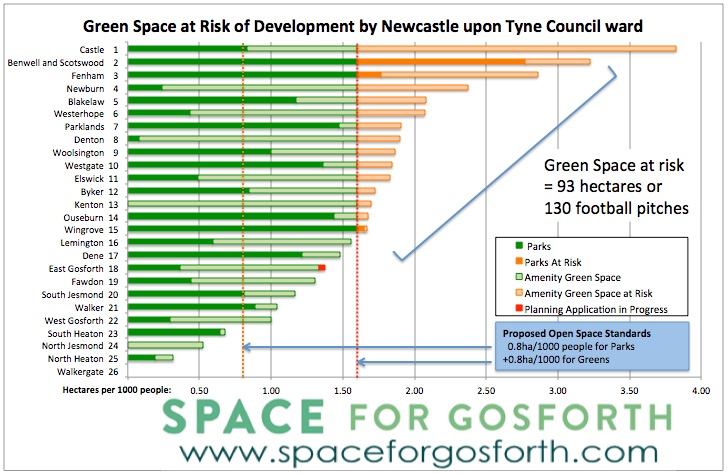 In fact, the area at risk is possibly larger than this as the above graph combines two categories, Parks and Amenity Green Space, and it is possible that development might be justified using just one category. So for example, Dene ward has less Open Space than the standards suggest is required for Parks and Amenity Green Space combined. The total for Parks by itself suggests that there is surplus and therefore current parkland in Dene could be built on.

As part of the assessment the Council’s consultants have drawn up plans of each of the City’s political wards to show where current provision exists. The map below is for East Gosforth but also shows Paddy Freeman’s Park, which is in Dene ward and under these standards could be built on.

Most of the green space in East Gosforth is shown in purple, which are school playing fields and therefore not open to the public. Light blue areas are private facilities such as the golf course just north of Garden Village. Amenity Green Space, what most people would just call greens and are open to the public, are coloured dark green and parks are in lime green, some with blue sports pitches. Also shown in dark red, within parks, are basketball courts and skateparks which collectively are called Youth Play Space, allotments in brown and Natural Green Space (The Town Moor and Jesmond Dene) in beige. 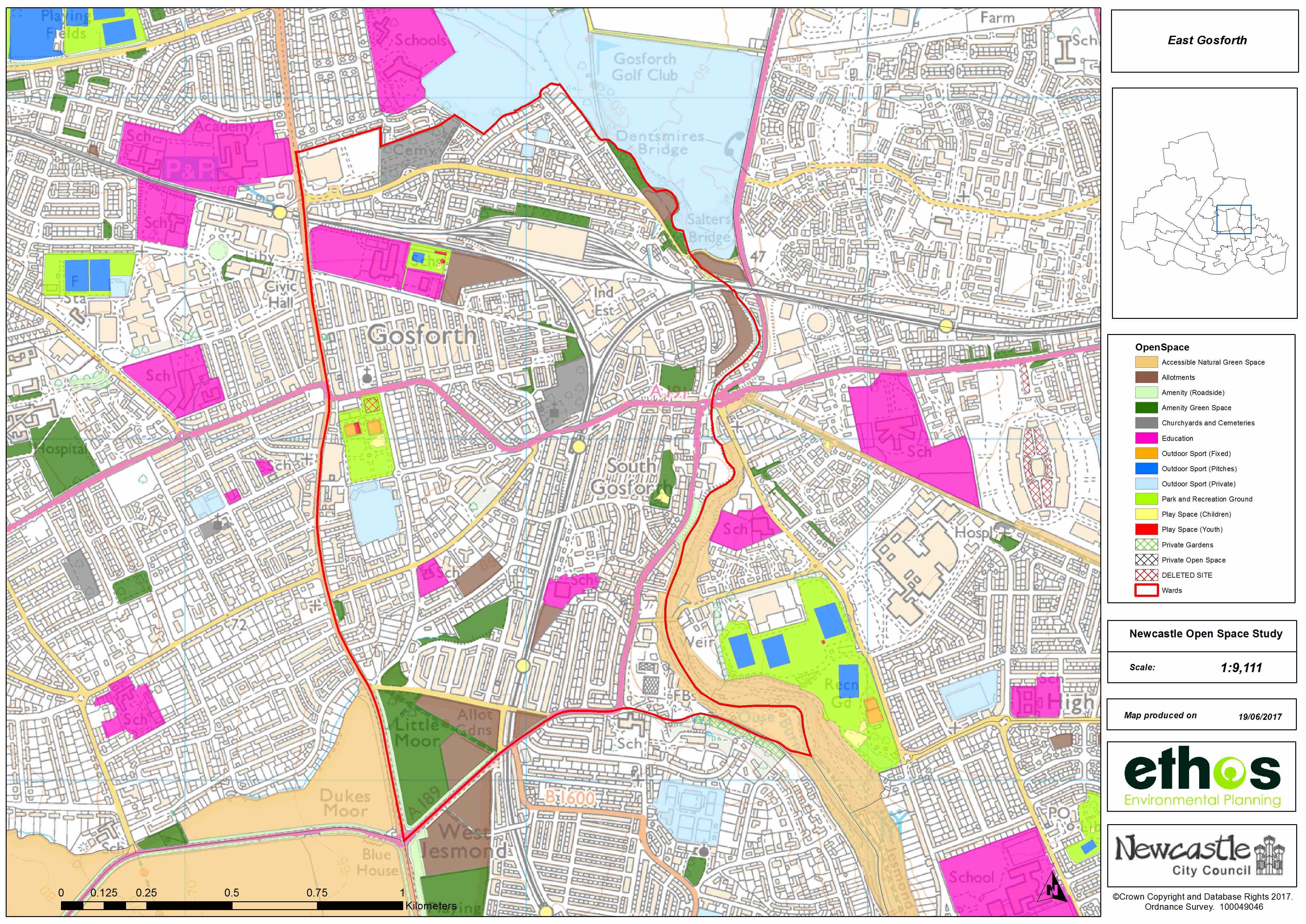 Each of these classifications has its own standard both from quantity as well as access. The Access standard distance is given as a straight line and the times calculated based on walking at 3mph on a route that is 12/3 longer than the straight line route. For example 720m straight line distance = 1200m actual walking, which at 3mph will take 15 minutes.

Typical speeds at pedestrian crossings are calculated based on 1.2m/s = 2.7mph, but with guidance suggesting older people are more likely to walk at 0.8m/s = 1.8mph. That would make a nominal 15 minute walk in these standards more like 25 minutes. A similar issue would exist where parks are located near Metro lines and walking distances are actually much further than the12/3 times assumed. 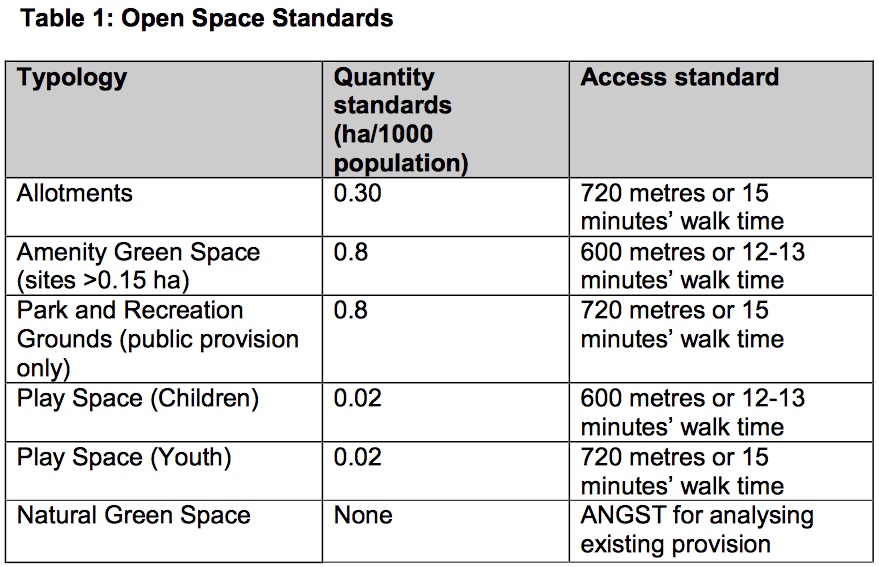 The approach taken to coming up with these standards is described in the 2017 Newcastle Open Space Assessment, which is part of the evidence base for the draft Development and Allocations Plan. For Amenity Green Space, the assessment appears to be based on a city-wide average (0.83ha/1000people) and a survey that said 52% of people said more informal open space areas were needed and 43% felt there were enough. No results are given for whether anyone thought there were too many open space areas but if that was counted it would have been less than 5% of responses.

The assessment also mentions a Fields in Trust guideline suggesting 0.6ha/1000 people, so slightly less generous than proposed but with a much shorter walking (not straight line) distance of 480m. The proposed standard suggests a walking distance over twice this, which is counter to separate evidence that children’s independence is being ever more curtailed to a large extent due to danger caused by large volumes of traffic.

Separately in the evidence base for the new plan there are assessments, based on the new standards, to justify development on four existing green spaces. These are:

The guidelines for protecting Open Space are set out in proposed new Policy DM29. This sets out a presumption that Open Spaces are not to be built on but with the new exception 1(i) where there is a surplus over the quantity standard.

Development where there is no surplus

Arguably though, it is not clear what protection this new standard is going to give when planning assessments made by the Council so easily override stated policy based on a ‘material consideration‘ unrelated to Open Space, and when the Planning Committee appears unwilling in these circumstances to assert the priority of the Open Space policies the members themselves approved. Ultimately, unless clear guidelines are put in place to set limits on the use of material considerations to over-ride policies that protect Open Space, far more green space could be irreparably lost to future development.

If you wish to comment on these proposals now is your chance. You can see the proposed Development and Allocations Plan here, and submit comments here until 20 November 2017.

This blog is a very brief summary of the Open Space considerations for Newcastle. For anyone interested in Open Space in the city the 2017 Newcastle Open Space Assessment sets out all the previous policies for Open Space and how they have changed over time, and if you spot anything else interesting in the standards please let us know via the Comments section below.