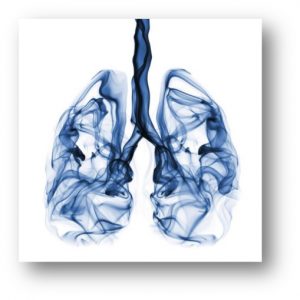 Dr Stenton is a Consultant Physician at the RVI Newcastle. His main interest is in work-related lung disease, particularly asthma, COPD and asbestosis.

Here he looks at some of the history, causes and effects of atmospheric air pollution. He also considers some of the emerging evidence on several insidious consequences air pollution is connected with.

In my work as a chest physician I see patients with many different types of lung conditions. Almost all lung disease is caused by something we breathe. Stretched out, the lungs would cover the size of a tennis court and with each breath inhaled bacteria, viruses, dusts and fumes can come into contact with the very delicate lining of the lungs and air passages. It is unusual for patients to make a connection between their symptoms and pollutants since in most cases the effect is insidious in that it accumulates over time and goes unnoticed until there are clear symptoms. Some who are sensitive to a particular pollutant may make a connection, as with traffic fumes affecting their chests. However, studies show that many people who live in cities are harmed by pollution from traffic, which is a major cause of death and disease. It is something we should all be concerned about.

The London smogs of the 1950s killed about 12,000 people and led to the introduction of the clean air acts of the 1950s and 1960s. After that it was believed for many years that the problem of atmospheric pollution was solved. However it became increasingly apparent in the 1980s that pollutants were causing increasing amounts of ill health. The older pollutants such as soot and sulphur dioxide from open fires and steam engines were often obvious. Less obvious but equally harmful pollutants, many of which arose from motor vehicles, replaced them. They included small easily inhalable particles (known as PM10 or PM2.5), ozone and nitrogen oxides (NOx) derived from motor vehicles and other sources. These pollutants are now recognised to be killing many more people each year than died in the London smogs with an estimated 40,000 premature deaths each year(i). That is an estimate and the true figure could be higher.

Pollutants from motor vehicles are generally produced together and it is difficult to disentangle the effects of one from another. Nitrogen dioxide is the most easily measured and so has the greatest amount of local data. There are measuring sites in Newcastle and other cities for other nitrogen oxides (NOx), ozone and small particles (PM2.5).

The first major modern study of pollution-related deaths came from the US. In the Six Cities study the average age at which people died in several cities showed a clear relationship with levels of pollution in the city(ii). The death rate was 30% higher in more highly polluted areas where average PM2.5 levels were 30ug/m3 compared with less polluted areas where PM2.5 levels averaged 10 ug/m3. A number of later studies have confirmed these findings and shown beneficial effects of reducing pollution levels. For comparison, PM2.5 levels in the UK are generally in the region of 10-20 ug/m3 but they vary considerably and can be much higher than that.

The Committee on the Medical Effects of Air Pollution applied the US data to the UK in their 2010 report and concluded that around 30,000 deaths in the UK can be attributed to particulate air pollution(iii). The figure rises to about 40,000 if the additional effects of NOx pollution are taken into account. That is equivalent to everyone living on average almost a year less than they otherwise would if there were no atmospheric pollutants at all.

These effects of pollution are largely unseen. Individuals die earlier than they otherwise would and that can be identified when a large numbers of people are studied but for any individual it is very difficult to determine whether and by how much their life might have been affected by the air they breathe.

Some effects of atmospheric pollution are easier to demonstrate in individuals. Asthma is the prime example and many sufferers notice worsened symptoms when exposed to high levels of traffic fumes. In one study(iv) researchers in London got 60 people with asthma to walk down Oxford Street which is quite heavily polluted by fumes from slow moving buses – nitrogen dioxide levels averaged 140 μg/m3 which is slightly higher than the peak seen in Gosforth High Street (110 μg/m3) and well above the current legal limit of 40 μg/m3. On average the people’s lung function had fallen by 6% at the end of the walk and the effect was greater in those with worse asthma. Walking though Hyde Park where the air is cleaner did not have the same effect.

There are many other studies that show the effect of air pollution on asthma and in those with other lungs diseases. Hospital admissions with bad asthma increase by 2% with every 10 μg/m3 increase in nitrogen dioxide levels(v). Similarly, admissions with pneumonia increase by 1.4% with every 10 μg/m3 increase. The average nitrogen dioxide levels around Gosforth High Street of 30-40 μg/m3 are therefore likely to be causing up to 8% more severe asthma and 5% more pneumonias than would otherwise be the case.

Potentially one of the most worrisome effects of atmospheric pollution is its apparent effect in slowing the growth of children’s lungs and potentially making them more vulnerable to a variety of diseases when they get older. In the first study of this in California(vi), children’s lungs grew 6% less between the ages of 10 and 18 in polluted areas compared with non-polluted areas. Nitrogen dioxide levels in the most polluted area was 66 μg/m3, about 50% more than that seen on Gosforth High Street. A number of other studies have shown similar results and demonstrated the beneficial effects of decreasing pollution levels.

Although the lungs are an important target for pollutants – they are our biggest interface with the environment and stretched out they cover the size of a tennis court – they are not the only organ that is affected. Small pollutant particles can pass through the lungs into the blood stream where they can set off inflammation that leads to heart attacks and other problems. Many of the excess deaths seen with pollutants are caused by heart problems.

Several studies have shown that heart attacks are more common during periods when pollution levels are high(vii). A large European study showed 13% more heart attacks for every 5 µg/ m3 increase in the level of small particles (PM2.5). A substantial proportion of cardiac problems are likely to be preventable by better control.

There is a wide range of other possible adverse health effects of pollution that are currently being explored. The European and American Respiratory Societies have outlined these in a recent joint paper(viii).

There is emerging evidence linking outdoors air pollution to diabetes and poorer control of diabetes, probably related to inflammatory effects of exposure to pollutants. There is even evidence linking childhood obesity to pollutant exposure possibly also brought about by inflammation causing resistance to the effects of insulin. Pregnant women are likely to be particularly vulnerable to the effects of pollution, and prematurity and low birth weight of children have both been linked to atmospheric pollutant levels. One study estimated that 11% of low birthweights in infants’ cases would be avoided if PM2.5 concentrations were reduced by 5 µg per m3 (reduced by about half to one quarter for the UK).

There is ample evidence of the wide-ranging adverse effects of atmospheric pollution on our health. The challenge now is for politicians and others to take these seriously and to take the steps necessary to protect the health of everyone.

(i) Royal College of Physicians. Every breath we take: the lifelong impact of air pollution. Report of a working party. London: RCP

(iii) Committee on the Medical Effects of Air Pollutants. The Mortality Effects of Long-Term Exposure to Particulate Air Pollution in the United Kingdom HMSO 2010.

(vii) Brook et al. Air Pollution and Cardiovascular Disease A Statement for Healthcare Professionals From the Expert Panel on Population and Prevention Science of the American Heart Association. Circulation. 2004;109:2655-2671

7 thoughts on “The dangers of air pollution – Dr Chris Stenton”