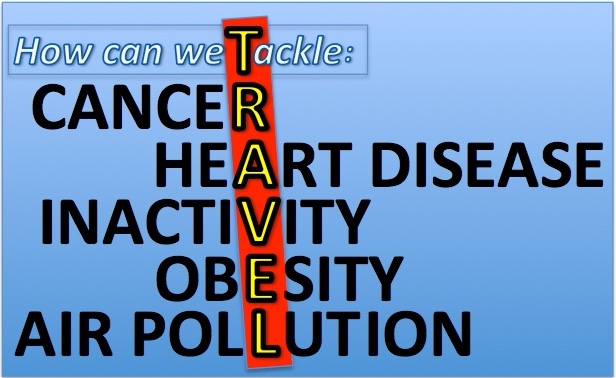 On 12 April, six days before the General Election was announced, the Evening Standard published an article quoting Theresa May stating that toxic air pollution is the fourth biggest public health risk behind cancer, obesity and heart disease.

While there are multiple causes for each of these public health risks,
we can dramatically reduce the impact of all these risks – and more –
by changing how we travel.

Clearly this is true for air pollution. The Draft UK Air Quality Plan for tackling nitrogen dioxide published on 5 May 2017 confirms that “road transport is responsible for some 80% of NOx concentrations at roadside, with diesel vehicles the largest source in these local areas of greatest concern“. Poor air quality is responsible for 40,000 early deaths each year. [Royal College of Physicians]

A study of obesity in Europe and North America showed that “Countries with the highest levels of active transportation generally had the lowest obesity rates.” Obesity is estimated to be responsible for 30,000 early deaths each year. [Public Health England] 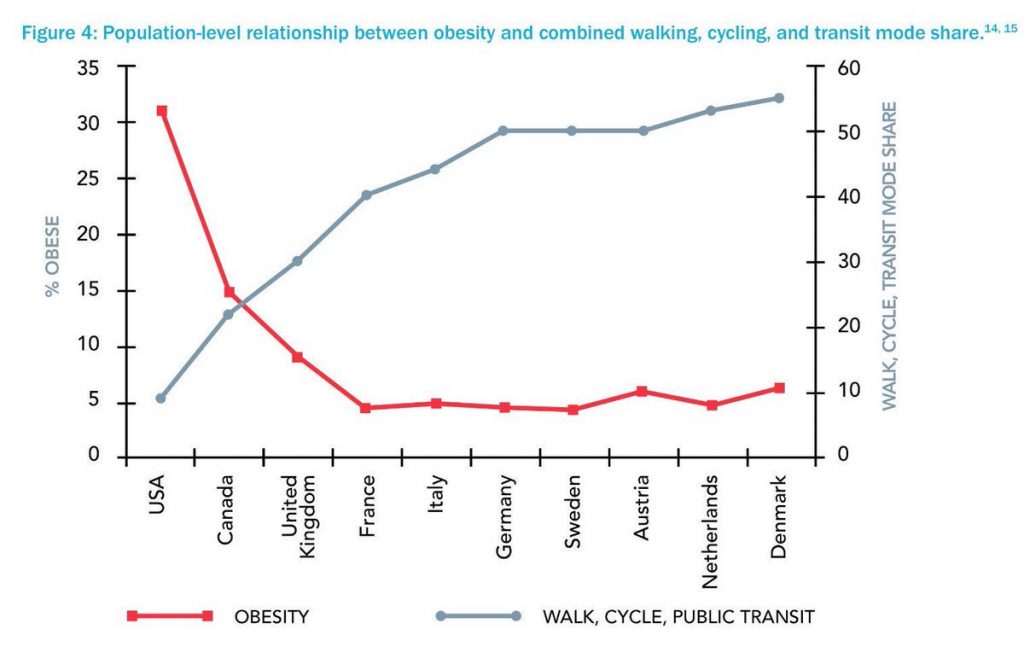 Walking, Cycling, and Obesity Rates in Europe, North America, and Australia from The Journal of Physical Activity and Health

Inactivity has been shown to be responsible for many more early deaths than obesity. According to the British Heart Foundation Physical Activity Report 2017 42% of adults in the North East are classed as being inactive. 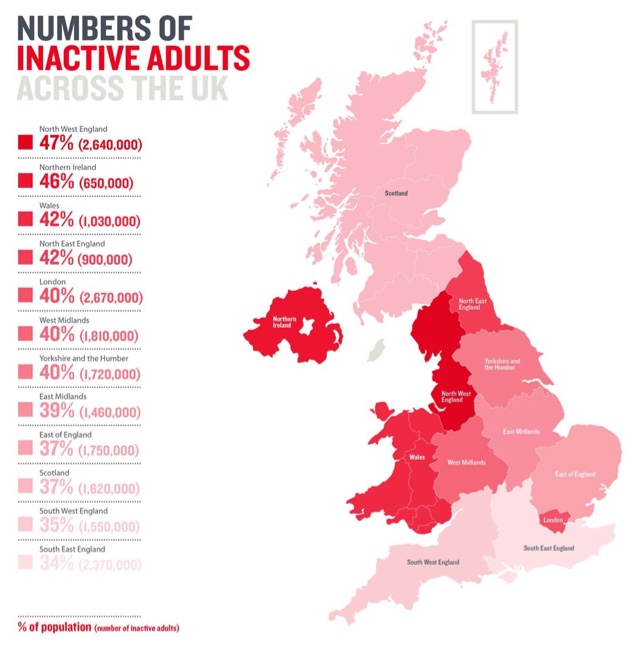 It is estimated that one in six deaths every year are directly due to inactivity. This is about 84,500 in England and Wales. Sedentary lifestyles: are also linked to increased pressure on (and costs of) social care.

Walking or cycling to work can also cut the chances of developing diabetes by 40-50% as well as reducing the prevalence of dementia.

In our blog Blue House – at what cost to health? we set out some of the other health risks of pollution including: reduced lung capacity and cognitive delay for children and links to dementia, infertility and sperm damage.

Walking and cycling also have a proven positive benefit to mental health. A study of 18,000 adults found that “Those who had an active commute were found to have a higher level of well-being than those who went by car or public transport. When researchers analysed the wellbeing of a small group who swapped the car or bus for a bike or going on foot, they found they became happier after the switch.”

A separate study of 20,000 children found that “Children who walk or cycle to school rather than being driven by their parents have an increased power of concentration, and the effect of this ‘exercise’ lasts all morning.”

The case for Investing in Walking and Cycling

All these reasons show why the new Cycling and Walking Investment Strategy (CWIS) and associated investment is so important.

As well as improving health, investing in walking and cycling has also been shown to:

This doesn’t have to take a generation but it does require ambition. In Seville, the actions they took led to the number of bike trips multiplying 11-fold in a just few years. By contrast the UK CWIS states the aim that it “wants cycling and walking to become the norm by 2040” – about 20 years slower (and with 20 years of lost benefit) compared to what has already been achieved by Seville.

Taken together, the benefits associated with walking and cycling schemes are typically far greater than those for other transport projects, potentially worth a £17bn saving for the NHS. They are also financially achievable within the existing transport budget by diverting spend from  projects with lower returns on investment.

What you can do

You can respond to the Government consultation on air pollution up to 15 June 2017.

And please keep sharing your thoughts on how we can improve Gosforth to encourage more people to walk (or cycle) via our National Walking Month post.

9 thoughts on “The Case for Healthy Streets”