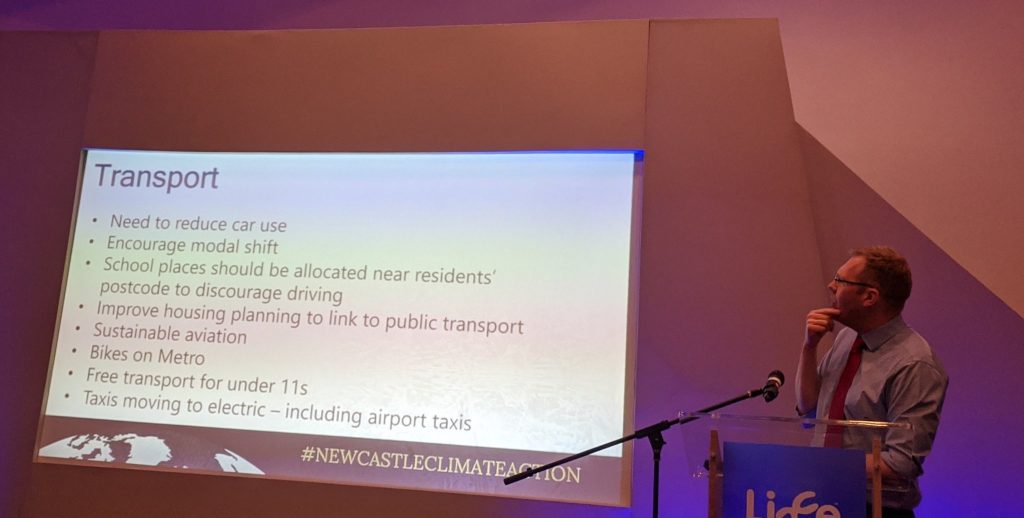 In January SPACE for Gosforth submitted a response to the Council’s Call for Evidence relating to Climate Change. We haven’t blogged about Climate Change before, mostly because resolving how our children get to and from school safely, and minimising the effects of polluted air on ourselves and our families, has always seemed more pressing.

Much of what we have done though, about making streets in Gosforth and Newcastle safe for children, and cleaning up the dirty air, will also help reduce carbon emissions. In this blog we look back at some of our earlier blogs that are relevant to climate change.  We have arranged the blogs in the same themes as we used in our response to Newcastle City Council’s call for evidence.

In paragraph 1 of our Climate Change response we said “Taking urgent action now, starting in 2020, will ensure Newcastle’s residents get the maximum benefit from the transition to low-carbon transport.” It is also critical if the Council’s target is to be met.

The Council’s target is for the city to be carbon neutral by 2030.  Newcastle City Council has previously had to meet targets for reducing air pollution – and their failure, and the Government’s failure, to meet those targets raises questions over their ability to achieve the new climate change target. The timeline we set out in our blog Fixing Air Pollution – at a Snail’s Pace shows that despite air quality limits being absolute and set in law, substantive work to meet air pollution limits through the implementation of a Clean Air Zone still hasn’t started over ten years after air quality limits were suppose to be achieved.

Sections 6-10 of our response was about stopping current activities that will lead to greater emissions. These should be fairly straight-forward for the Council, and could be an early test of the Council’s commitment to the target.

Sections 20 to 26 of our response was about reducing the need to travel. This is not likely to be something that can be done quickly, but preventing new developments from being dominated by roads and trapping people in car-dependency will be important and the planning rules to support that will need to be put in place quickly.

Petrol and diesel vehicle emissions can only be reduced at the scale and speed required if in future there will be fewer journeys. Sections 27 to 45 of our response set out proven approaches such as road pricing and reducing road capacity as ways to achieve this.  We have also looked at these issues in a number of blogs.

About half of our response, sections 46 to 91, was dedicated to alternatives to driving.  We have explored these issues in a number of blogs, as might be expected given our focus on walking and cycling. These blogs include:

Co-benefits should be sought and highlighted

As one of six guiding principles explaining how we had structured our response we talked about ‘co-benefits’.

“Modal shift away from driving towards the lower carbon alternatives presents an opportunity to deliver co-benefits e.g. public health, a stronger and more resilient local economy, strengthened communities, reduced road injuries and deaths. These co-benefits should be sought and highlighted.”

We have written about the benefits of active travel a number of times. Perhaps the most comprehensive of our blogs is The Case for Healthy Streets, which sets out the beneficial effect of active travel on rates of cancer and heart disease, how it combats negative health effects associated with inactivity and obesity, and of course the fact that walking and cycling, unlike most other forms of travel, are not responsible for air pollution or greenhouse gas emissions.

Other blogs that look at this issue include:

The Council has committed to producing a plan to achieve net-zero in Newcastle upon Tyne by 2030. Many of the proposals and ideas we have shared could be implemented quickly and easily for relatively little cost as part of that plan.

By implementing these proposals the Council could also meet its policy objectives of cleaner air, safer more accessible streets and improving choice for how people travel.