A Bike Train is a led ride along safe routes, and the idea is that it shows people a good route to work to get them started commuting by bike.

I heard that GoSmarter was running a Bike Train from Kingston Park through Gosforth to Quorum business park and decided to try it out. I checked out the route and timetable online.

I registered for the Bike Train, joining at my nearest stop which was Regent Centre, and received a confirmation email.

On the morning of the Bike Train I arrived at the Regent Centre where I met Dave of Bike4Health, who was leading the Bike Train, and the other riders.

With Dave in the lead we headed from Regent Centre across the Great North Road with the traffic lights, with Dave turning round to check that we were all still together as we entered Hollywood Avenue.

It turned out that this was the only busy road between Regent Centre and Quorum that we would cross on-road, but Dave explained that if I hadn’t been comfortable with this, then we would have used pedestrian crossings instead and then rejoined the road on Hollywood Avenue.

After only a couple of minutes on Hollywood Ave we turned off into quieter roads in Garden Village and took a shortcut between some houses.

We came out of the shortcut onto Woodlea Gardens alongside the Ouseburn. We crossed the bridge and were on a traffic free path.

We followed this path for a couple of minutes. 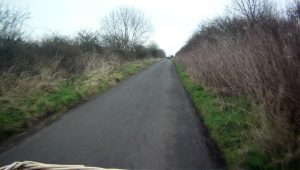 We turned onto Heathery Lane where there was no traffic, just a couple of people running or walking their dogs.

At the end of Heathery Lane we used a signalised crossing to cross Salters Lane safely.

This path took us all the way to Benton Road where we used another signalised crossing to cross the road safely.

We used the off road cycle path to enter Quorum business park. 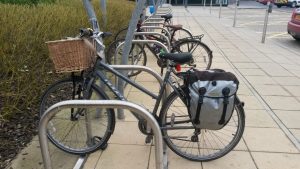 This brought us to our journey’s end: the undercover cycle parking.

This was a direct and surprisingly quick journey of from Gosforth to Quorum, passing Gosforth Business Park and Balliol Business Park along the way. At only 15 minutes it was actually faster than the 20 minutes on the Bike Train timetable and compares well with GoogleMaps estimate for the journey of 12 minutes by bike and 8-22 minutes by car, depending on traffic and route. Even though I have lived in Gosforth for a long time, I wasn’t aware of this as a possible route to these workplaces. This was a flat journey so it was very easy cycling and with safe crossings at each road that we needed to cross and with most of the distance being covered off road, it is one that most people could feel comfortable cycling.

The trip on the Bike Train showed me that even close to home there are still new routes waiting to be discovered. Making this trip by bike on this route was a quieter more relaxing and scenic way to travel than going by car on the main roads. A Bike Train is sociable way to find new ways to get to work.

If this has whetted your appetite and you would like to try a Bike Train, then please leave a comment below or email us on spaceforgosforth@gmail.com letting us know where you would like to travel to/from. If there’s enough interest we’ll see if we can organise one!