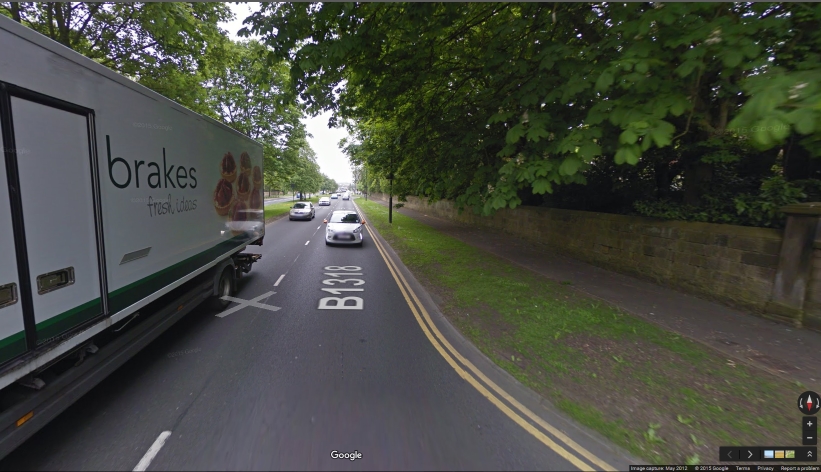 Judging by the 78 responses to the ‘Broadway to Brunton Lane’ consultation most people agree with the aims of the scheme, not least the prospect of a cycle lane safe for children to use, though there are a few details to work through.

This is a summary of what people said.

As we said in our previous article here the current road layout is poor for those walking and cycling. Comments reflected this.

“At present I avoid cycling the Great North Road north of Broadway (I did cycle this route 2 months ago and really regretted it as I felt very vulnerable next to the fast-moving traffic) and I really resent having to drive this route as it is ridiculous to have to take the car when travelling around within Gosforth (given you can cycle from one end to the other is 20 – 30 mins) when the only real reason for needing to drive is safety.”

Not everyone sees this though.

“It is fine as it is and no changes are necessary”

“Spending money on a few cyclists is a complete waste. There are no traffic volumes, cyclist numbers, accident records or speed checks to justify any changes”

This is an exact from the Crash Map website for the area covered by the proposal. It might have been useful for the Council to have included this. Each of the “!”s represents one crash involving a casualty that was reported to the police between 2005 and 2014 (damage to cars or property only are not recorded). Orange is for a slight injury; red for a serious injury; purple for a cluster. 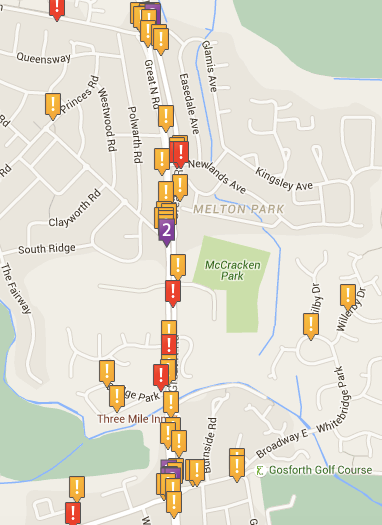 Tellingly, neither of these two respondents travel to this area on foot or by bike.

The scheme should benefit everyone though and this was also reflected in the breadth of support for the scheme’s aims. 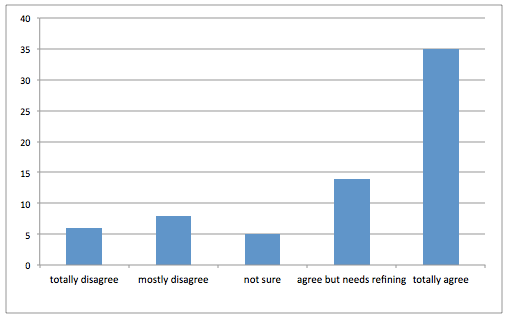 Quite a few people mentioned issues in their responses.

“Air pollution (mainly from cars) is very bad in Gosforth.”

“This road also funnels traffic into Gosforth High Street and so is responsible for a lot of the pollution issues there. With 500-odd extra homes due to be built around Wideopen we need some really good alternatives to the car ASAP otherwise the Council will be forced into putting far greater restrictions on motor traffic to meet EU health targets.”

“Gosforth is struggling to cope with the vast number of vehicles currently using the area and many of our roads, streets, roundabouts and junctions are already unable to deal with the huge volume of traffic.There are a large number of new houses planned for this area of the city, therefore improvements to alternatives to car traffic are vital otherwise gridlock will occur more often.”

Everyone benefits from less traffic and cleaner air. This Times article “I don’t ride a bike, why should I support measures to boost cycling?” sets out the case quite nicely. Studies such as this one by the Healthy Air Campaign show that it is drivers and their passengers that breathe the most polluted air in heavy traffic conditions, and therefore have most to gain. Our summary here lists some of the possible health impacts of pollution.

Back to Gosforth, these are the reasons people gave for liking the proposal. 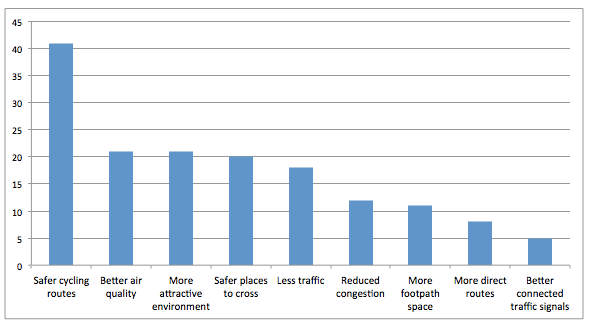 Quite a few people, many identifying themselves as residents of Greystoke Park, commented on changes proposed to the entrance to that street. This was fairly typical.

“It removes the deceleration lane from the entrance to Greystoke Park increasing the risk of accidents with following cars expecting a left turn into a) Bridge Park or b) Shell garage.”

Hopefully the reduction in speed limit to 30mph (which just about everyone supported) should mitigate this. There may be other reasons we aren’t aware of for this being a particular issue at this junction, but it’s worth noting none of the left turns in the current 30mph zone have deceleration lanes.

Quite a few people were concerned about enforcement of the new speed limit as well as other traffic issues.

“Enforcing the proposed speed limit reduction – at present there are too many infringements of traffic laws in Gosforth (speeding, drivers driving through red lights, drivers using mobile phones). This is unacceptable in a residential area.”

Others mentioned education for road users, though ideally the road layout should make it as safe as possible. This comment captures the rationale for right angle junctions.

Whatever the other considerations, the key focus for design must be on the most vulnerable of road users, people walking and cycling, who don’t have a metal shell with a crumple zone to protect them in the event of a crash.

The other main issue noted was the north-bound exit from the Brunton Park roundabout.

“Brunton Park roundabout – “2 into 1 won’t go!” – you have 2 lanes approaching the roundabout from the south, both indicating you can go straight ahead, but there is only one lane emerging on the north side of the roundabout – this has all the potential of an accident blackspot.”

“Given the volume of traffic heading north, correcting the existing plan to make the inside lane a compulsory left turn into Brunton Park will simply add to the congestion because the majority of drivers will be heading north and give you a problem when they either have to start filtering into the right hand lane as they approach the roundabout, or worse, decide to change lanes on the roundabout itself!”

This could be resolved by reverting to two lanes before and after the roundabout but going for a single lane might have other advantages.

“I like the fact that the number of lanes on this section of road is to be reduced, along with the speed limit. This makes it feel more like what it is (an urban road through a residential area) and less like a major dual-carriageway (as it was when it was the A1!). This will hopefully have the effect of slowing traffic speeds, reducing traffic volumes (by encouraging people to take the actual main road into the city from Cowgate), and therefore improving air quality.”

“I do wonder if two lanes are really needed for non-bus traffic going north given one is deemed sufficient going south. It would be much better if the north-bound inside lane could be used for wider pavements, turned into a green verge, or in places used for a deceleration lane or bus stops. North of the entrance to Brunton Park it could be used for an extension of the off-road cycle lane, which means a much wider range of people will use it. It would also help encourage people driving to stick to the new lower speed limit, which I also support.“

The desire for the cycle lane to be separated from motor traffic for its full length was picked up in several comments.

Other comments, though possibly not made for this purpose, give some indication of why this might be a good idea.

Even the sections where separation is proposed need to be carefully designed for families and  children, who are likely to be amongst the biggest users.

“Although the cycle lane is a huge improvement which will make most adults feel much more confident about cycling, many parents would still not let their children use the cycle lane right next to the road.”

“Between Fencer Court junction and McCracken Close junction there is a section of cycle lane which is too close to the road. Kids need to cycle safely here and will be too close to large buses with the potential of being knocked over by the air stream of the bus. Would you let your kids stay beyond the yellow line when the Metro train comes into the station? The same reasoning should apply for cycle lanes.”

Others are just keen to get this on the ground so they can go for a bike ride.

“I’m really looking forward to being able to use this path without fearing for my life, and taking my kids for rides to the shops in Brunton Park and on to Gosforth Park. This just wouldn’t be possible if it was another dotted line on the main carriageway.”

“Dislike the dual cycle lane on the north bound carriage way, not enough room for pedestrians.”

Presumably this is a comment about the status quo as well given the pavement width doesn’t appear to vary along the route north of the roundabout. It also needs balancing against suggestions that the dual lanes should extend for the length of the route. This, and wider pavements, would be relatively easy to achieve  if the north bound carriageway became a single lane.

“Having bi-directional cycle paths is also good given how wide this road is and, even with the extra crossings it will be a pain to get to the other side of the road. It would be great, and no doubt safer, if children going to the High School could cycle all the way from Brunton Park without having to cross the main road.”

Comparisons with Broadway roundabout were inevitable.

“I hope there won’t be ‘cyclists dismount’ signs at each of the junctions as there is at Broadway.”

The current entry to Polwarth Drive

And one person (a driver and bus user) offered a proposal that would improve safety at the Broadway roundabout itself.

“It fails to address the problem pedestrians have crossing the road at Three Mile. The bridge is often unusable (wind, rain, ice), and the distance to the pedestrian crossings are too far for elderly people.”

The footbridge by the Three Mile Inn

Others suggested ideas that would reduce traffic along the length of the Great North Road.

“Also more needs to be done to encourage long distance motorists to use the Western Bypass rather than rat-running through Gosforth, which is already congested and polluted due to the number of through vehicles.”

And everyone will agree with this.

“Construction work should be done in the shortest possible time, with the least inconvenience to residents and road users.”

You can see the full set of comments here on the Commonplace website: https://gosforth.commonplace.is/schemes/proposal/bruntonlane/details

This was the SPACE for Gosforth view: http://spaceforgosforth.com/broadway-to-brunton-lane-comments-required-by-21-december-2015/