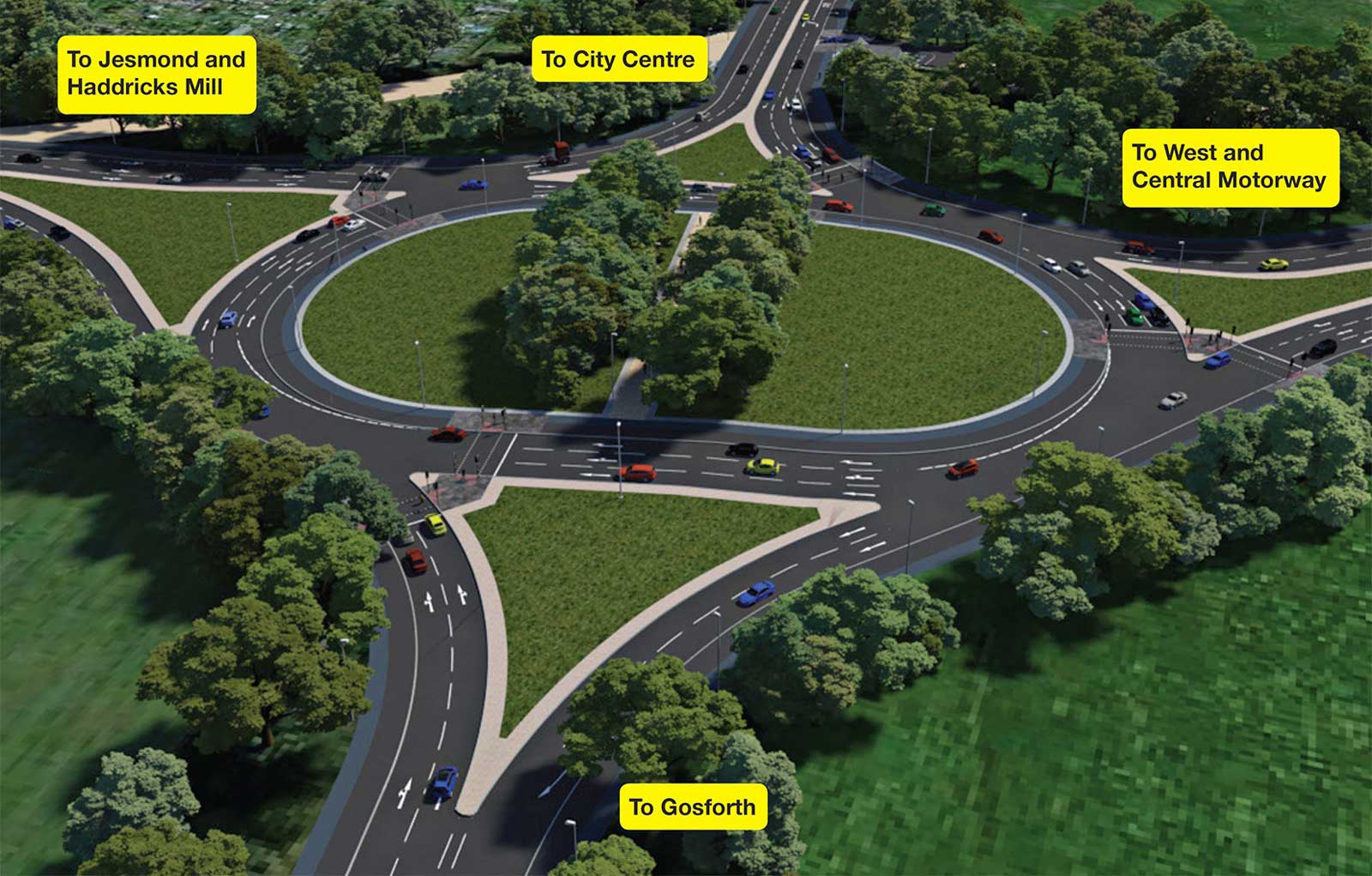 The new Blue House is not designed just to cope with current traffic levels. The Council, we believe, is forecasting significant growth in traffic through this roundabout, leading directly to the junction’s massive size and loss of green space on the Town Moor. We thought we would have a look at the Council’s plans to see where this additional traffic might come from and what the impact might be on Newcastle as a whole.

Helpfully the ‘Newcastle City Council: Pinchpoint Application Fund Bid‘ contains some information on the likely beneficiaries which include employment sites, health services and educational establishments shown on the annotated map below. These include Newcastle University and Northumbria University, the Freeman Hospital and the Royal Victoria Infirmary, Benton Park View (known locally as “the Ministry”) and a number of businesses in and around Gosforth. 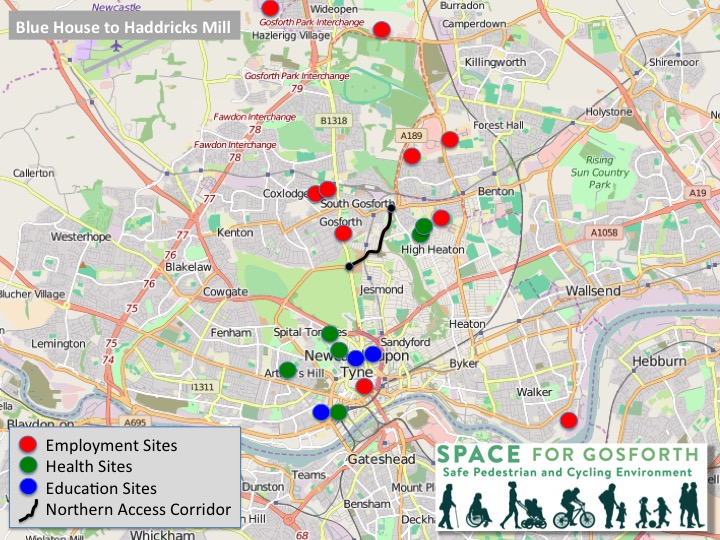 Using this map we can start to draw on the likely routes taken by traffic using these newer higher capacity junctions (shown by the blue arrows below). Whether this extra capacity is needed or not, through a process of ‘induced traffic’, it is likely that it will be used. This will mean more vehicles on all the routes shown below and any benefits in terms of reduced congestion will be short-lived.

While there is a benefit (while it lasts) to helping people get about, if this means more motor traffic rather than, for example, more walking or cycling then there is an associated cost. As we set out in our post on Gosforth High Street, these costs include reduced air quality, more road traffic collisions and noise.

Air quality is a particular issue in this case as the Blue House to Haddricks Mill route forms one arm of the South Gosforth Air Quality Management Area (AQMA) (the other arm is Gosforth High Street) and the induced traffic could lead to more air pollution in the City Centre AQMA as well. 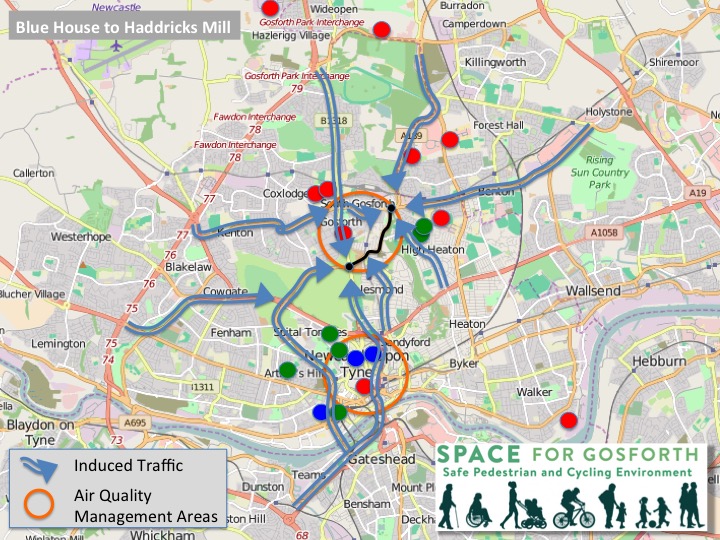 In February 2016 the Royal College of Physicians released a report about the lifelong impact of air pollution, which said: ‘Each year in the UK, around 40,000 deaths are attributable to exposure to outdoor air pollution which plays a role in many of the major health challenges of our day. It has been linked to cancer, asthma, stroke and heart disease, diabetes, obesity, and changes linked to dementia. The health problems resulting from exposure to air pollution have a high cost to people who suffer from illness and premature death, to our health services and to business. In the UK, these costs add up to more than £20 billion every year.’

In July 2016 the UK Faculty of Public Health released a report More cycling and walking; less driving, needed for our health and economy including a list of recommendations on street-design and traffic management. These recommendations can help guide us to an alternative approach that gives people genuine choices in how they can travel and with just as great a capacity to get people to where they want to go, but without the damaging side effects.

Below is the same map as before but showing the Metro and current Park and Ride locations, as well as a circle centred on the Blue House showing that most of Newcastle is within three miles. Three miles takes about fifteen minutes to cycle. 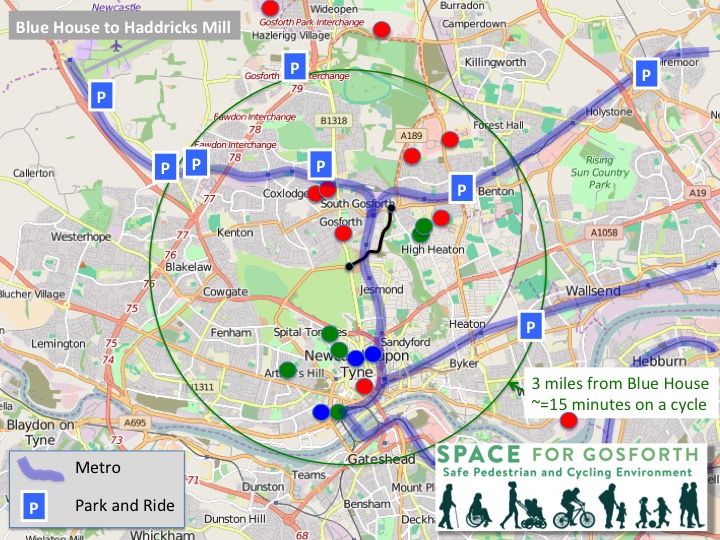 The Blue House proposal and its potential impact on the Town Moor has caused many people in Newcastle to reconsider the impact of how we travel. This is our opportunity to tell the Council how we want to get about and how we want our roads designed to support that, whether that is through wider pavements, an improved bus network, additional metro lines, park and ride, protected cycle lanes, or through an ever expanding network of urban motorways and over-sized junctions.

You can comment on the Blue House, Jesmond Dene Road and Haddricks Mill proposals on the Council’s Commonplace website.

This is what Newcastle’s Director of Public Health Professor Eugene Milne says about air quality and how we should be travelling if we want to live in a healthy city where we can all breathe clean air.

4 thoughts on “Blue House – at what cost to health?”