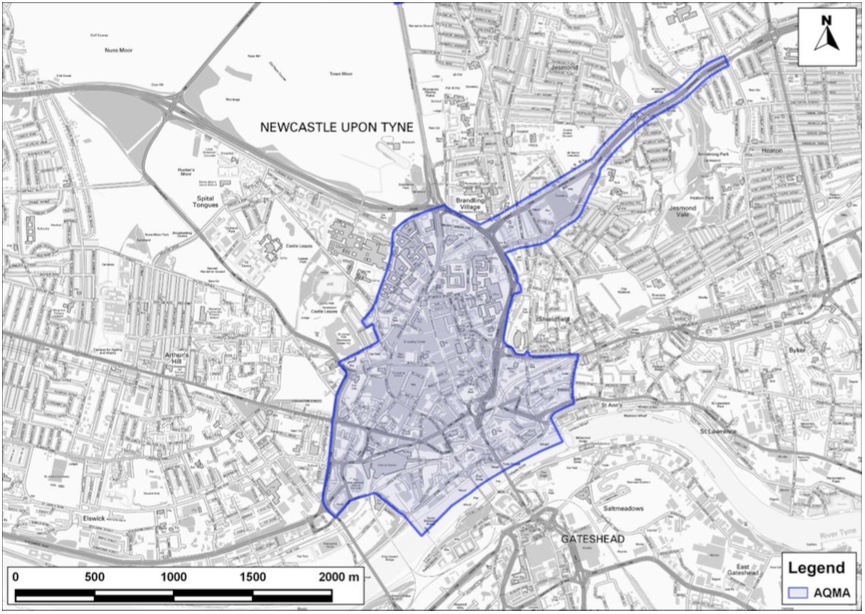 In our last post Black Friday, Smoggy Saturday… we shared some data from the monitor in Salters Road car park. In this post we look at the City Centre Air Quality Management Area (AQMA), including equivalent figures from the air quality monitor sited at Jesmond Road, 150m west of the Osborne Avenue traffic lights, to see how this compares to Salters Road and whether the recent increase in air pollution is replicated there.

The current City Centre AQMA was declared on 1 April 2008, with the deadline for compliance with European air quality limits being 1 January 2010. In 2015, Newcastle was one of 169 Local Authorities including North Tyneside Council and Gateshead Metropolitan Borough Council where the annual mean nitrogen dioxide (NO2) air pollution limit was still being exceeded.

In November 2016, the High Court ordered the Government to produce a new draft plan to meet air quality targets by 24 April 2017 and a final plan by 31 July 2017. This was after an earlier government plan to tackle air pollution was declared illegal in April 2015 and a further plan produced in December 2015 was also found not to meet the law’s requirement of cutting NO2 pollution to legal levels in the “shortest possible time”. 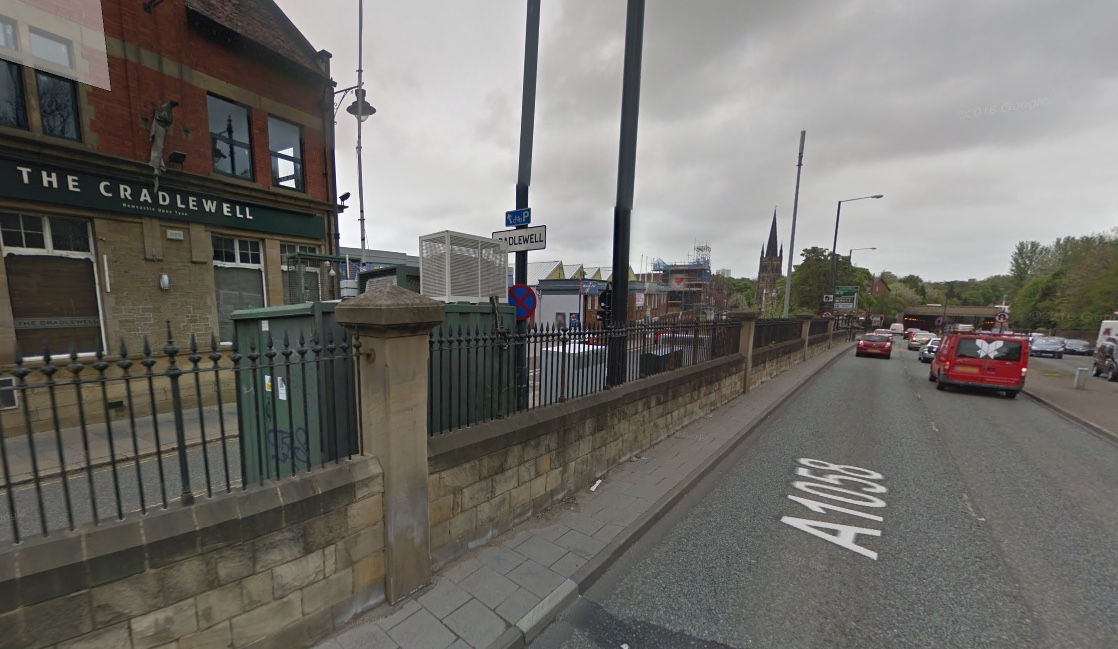 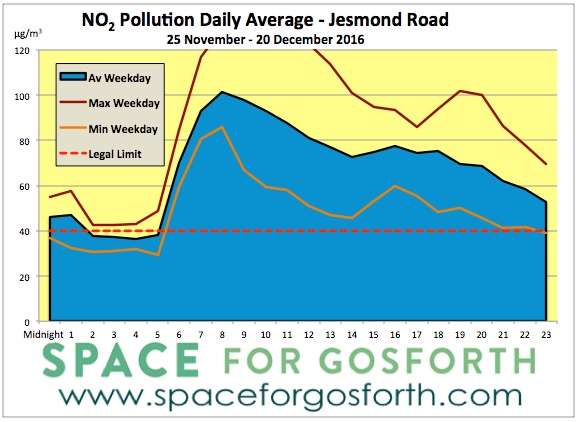 TADU (Traffic & Accident Data Unit) monitoring data shows that during 2015, the average number of vehicles passing this point every weekday was 50,280.

In common with Gosforth, the average readings for the two months prior to Black Friday are much lower although in this case, at 46.6 μg/m3, still above the annual legal limit of 40 μg/m3. This suggests the recent (possibly temporary) increase in pollution at these sites is unrelated to any specific changes to road layouts and most likely has some other underlying cause. 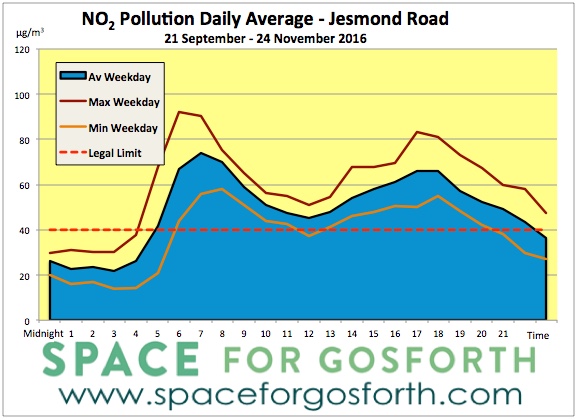 For the rest of the City Centre AQMA we have to rely on results from the NO2 diffusion tube monitors from the 2016 Air Quality Status Report. This shows that in 2015 the legal maximum was exceeded at the 17 monitoring sites listed below. 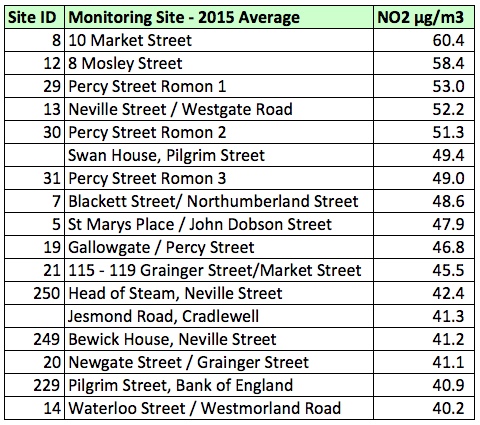 Of these sites 7 showed an increase compared to 2014 including Jesmond Road and Market Street, and 7 showed a decrease in pollution levels. Three of the measuring sites were new for 2015.

Clearly, Newcastle City Council needs to take urgent action in order to bring pollution levels to within legal limits and to protect the health of those that live, work, shop or study in Newcastle city centre and nearby areas. 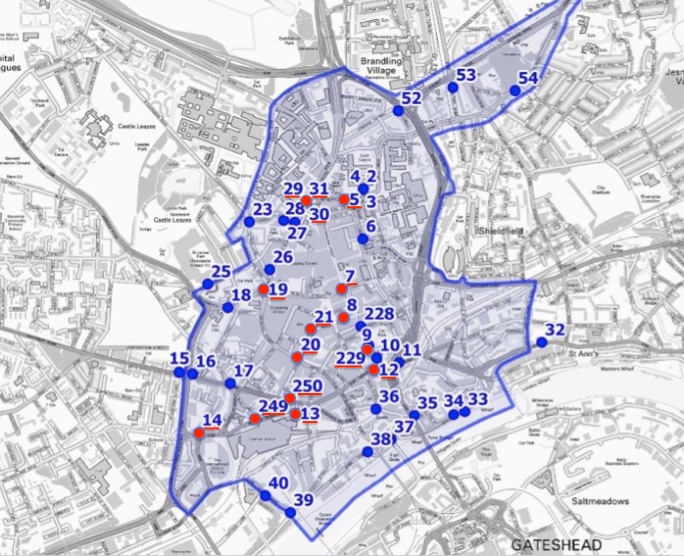 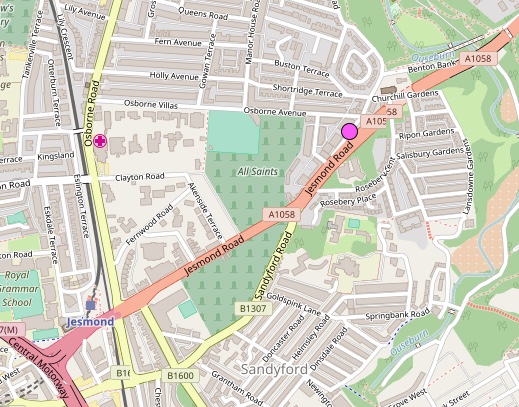