If you were asked to name one place that’s more in thrall to the car than the UK, most people would say the USA. That’s why, when American cities concerned about road safety, pollution and congestion have wanted to rebalance their roads to favour healthier and less polluting alternatives, they have had to make their case in very strong terms. This has resulted in studies that show the impact of pedestrian and cycling improvements on safety as well as on travel preferences, on house prices and on local businesses.

The outputs from these American studies confirm what the Dutch and Danish, amongst others, have known for a long time – that safe liveable streets make for healthy, attractive and vibrant communities. They also mean we now have data we can use to predict the impact of making similar changes in Gosforth.

Seattle: A study in Seattle, which has very similar weather to Newcastle, used retail tax data to look at the impact on businesses in two locations where cycle lanes were installed. As the authors say “numerous businesses wrote to the city in opposition to the new facilities planned on their streets“.

What happened? In one location there was no impact, the businesses continued to perform in line with rest of the neighbourhood. In the other, “NE 65th St experienced a 350% increase in sales index, followed by another jump to 400% sales index the following quarter“. 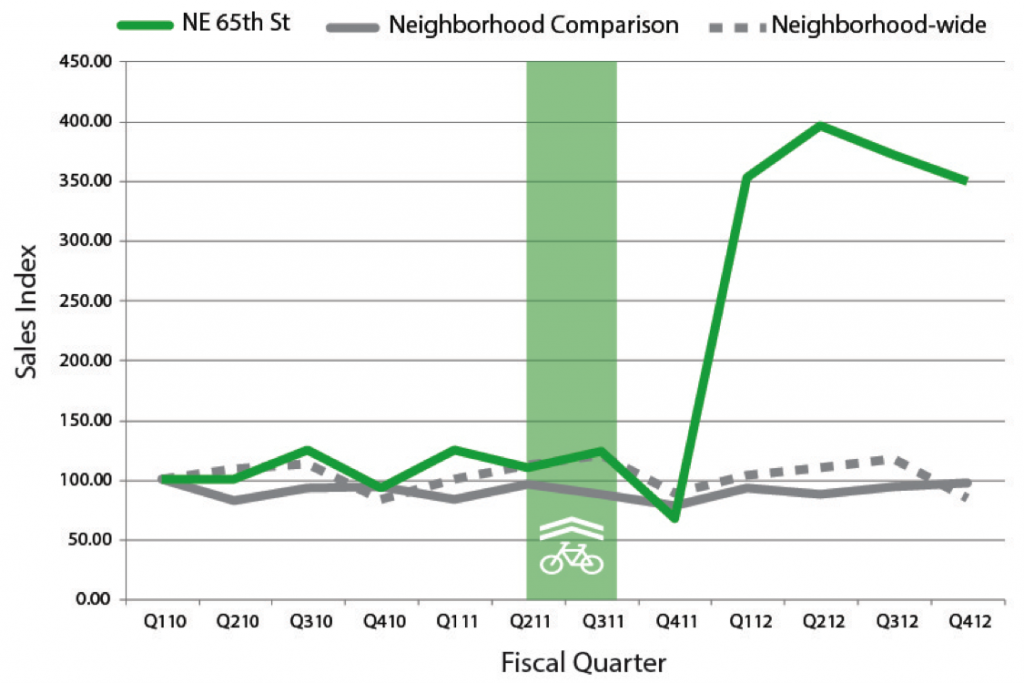 Salt Lake City: “On Salt Lake City’s Broadway, replacing parking with protected bike lanes increased retail sales. A general street upgrade removed 30 percent of the auto parking from nine blocks of the major commercial street but improved crosswalks, sidewalks and added protected bike lanes. In the first six months of the next year, retail sales were up 8.8 percent over the first six months of the prior year, compared to a 7 percent increase citywide. After the changes, 59% of business owners on the street said they supported them; only 18% opposed.”

New York Ninth Avenue: “Sales along Ninth Avenue in Chelsea were lagging when compared to similar nearby retail streets, but after a protected bike lane and pedestrian islands were installed in 2007, sales increased 49 percent over three years, outpacing both its neighbors and the rest of the borough.”

While all these studies show varying levels of improvement, the key thing is that in all cases businesses do benefit, even if installing cycle lanes results in fewer traffic lanes or fewer on-street parking spaces.

Other studies give insights into why this might be the case. Two key results stand out. 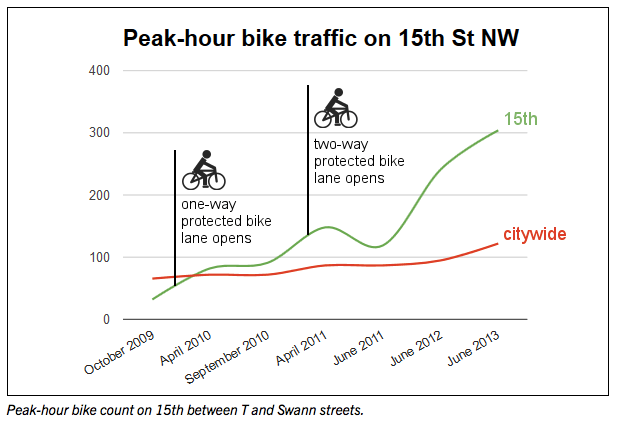 Cycle numbers treble after installation of a protected cycle lane

Other studies such as this one from the University of British Columbia in Canada also show that protected cycle lanes (cycle tracks) dramatically improves the safety for people using them compared to no cycle lane or white lines painted on the road.

Installing protected cycle lanes can also improve the experience for pedestrians. On Gosforth High Street this should mean that bollards used to prevent pavement parking can be removed, freeing up 2 feet of additional pavement space.

2. People don’t spend less just because they travel by bike

In Portland they did a separate study on spending habits. This found, not surprisingly that at supermarkets drivers spent more than cyclists, pedestrians and bus users over a month – but for smaller shops, bars and restaurants, cyclists outspent drivers in every category.

All high streets are different of course but there is no reason these same positive business outcomes can’t happen on Gosforth High Street.

Encouragingly many businesses we have spoken to, while having reservations about other aspects of the Council’s proposed schemes, have been supportive of making the High Street safer for cycling as well as for other improvements for pedestrians and overall safety.

And if you still don’t believe this is possible, this video from Holland shows just how easy it is to shop by bike when the right facilities are in place.

* The website http://www.codeminders.com/weather_similarity/ shows world-wide cities with similar climates. The default is to show San Fransisco but if you zoom out then scroll east (right) you should be able to find and click on Newcastle. Port Angeles, which is about 80 miles north west of Seattle, has a 99% match with Newcastle.

6 thoughts on “Can protected cycle lanes be good for business?”