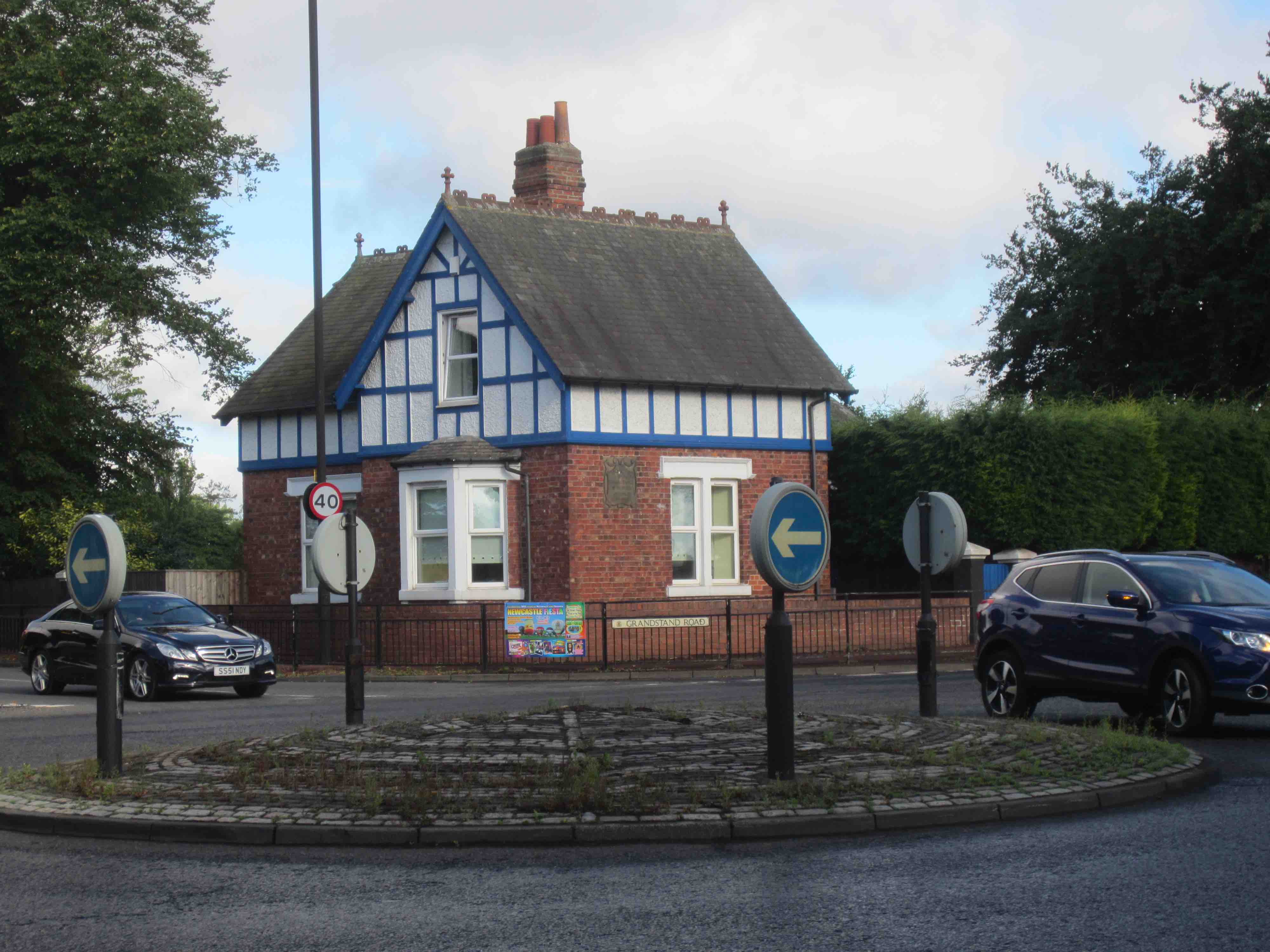 Of the three proposals open for comment on the Commonplace website the proposal for the Blue House roundabout has attracted by far the most comments, almost all of which are negative due to the size of the proposed replacement and the consequential loss of green space.

While the Council might seek to justify this with a forecast increase in motor traffic, it would also be a significant loss to the City. The health benefits of green space are well known but there are also economic benefits. The Council’s Green Space Strategy from 2004 states “Green spaces play a big part because they help make our city a more attractive place for people who live and work here but also a great place for visitors and tourists.”

At the same time traffic volumes from the TADU website show that rather than increasing, actual volumes since 2008 are generally on a downward trend. 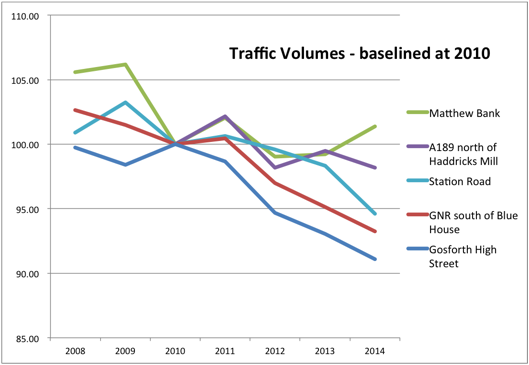 Such a large junction would also be counter to the Council’s own policy EN3.1 (Landscaping and Trees) as identified in the Screening and Scoping report  for the Blue House proposal which says “Development which would demonstrably harm the following areas of exceptional landscape value [which includes the Town Moor] will not be allowed” (our underlining).

For these reasons alone, SPACE for Gosforth does not support the proposed new junction layout.

In our last SPACE post we posed a number of questions designed to test whether the roundabout, which remains the single option for consultation, supported walking and cycling.

It is important in any consultation of this sort to be clear which elements you support and which you do not – and to give reasons why for each.

1. Are there safe routes for pedestrians and cyclists through and across these junctions?

Yes, the proposal has level walking and cycling routes separated from each other and from motor traffic and crossing points controlled by signals.

2. Are the routes sufficiently direct and easy to use that they will encourage people to use them rather than riding on the road or using informal crossing points instead of those provided?

This is the major flaw with the proposed design. By making people walking or cycling cross via the central island (via 4 sets of traffic lights compared to a single crossing now), and wait for a traffic light sequence set to maximise vehicle throughput, it is likely that cyclists in particular would choose to use the road instead as they are entitled to do so.

This entirely predictable consequence of the proposed design means that the gains to traffic flow that should be expected from separate cycle routes, e.g. because buses do not have to wait behind cyclists (or vice versa), will not be achieved and the additional volume (and most likely speed) of traffic means that safety benefits might not be realised either.

3. Do the junctions promote the efficient movement of pedestrians and cyclists in all directions to make it easier and quicker to walk or cycle?

For all the reasons above, the answer to question (3) is also no.

4. Are walking and cycling routes usable by people of all ages and abilities, and for cycling especially do they connect to a wider network of safe routes?

The routes should be suitable for all users and, in particular, routes separate from traffic have been shown through research to be suitable for child and less confident cyclists.

The proposal is not clear on the much needed connections to a wider network.

5. Will the new junctions encourage more motor traffic, which will counteract any benefits by causing increased traffic, air pollution and reduced safety on surrounding streets?

Adding capacity to roads almost always leads to more traffic. More motor traffic means greater road danger and more air pollution, and reductions in journey times as a result of the extra capacity are likely to only be temporary at best.

6. Are there better, simpler or more compact designs that will better achieve the same aims?

Looking at the junction from above using Google Earth, you can see that already the junction occupies a significant area with three lanes of traffic entering from the north, east and south arms. We hope it should be possible to design a new junction that keeps everyone safe within the existing space. 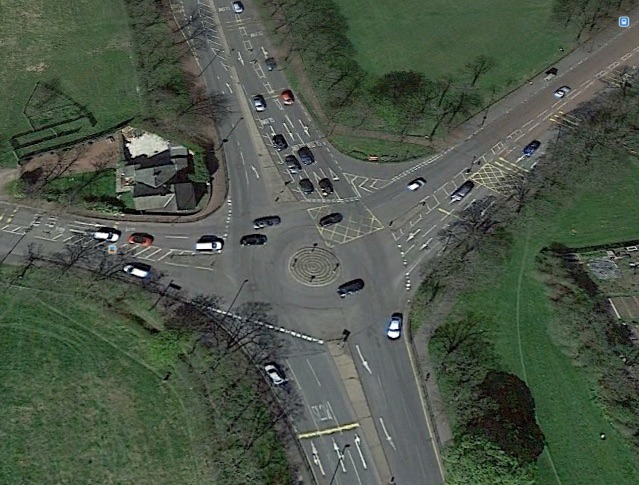 Part of this may be achieved by designing the junction to prioritise transport that uses road space the most efficiently, which includes buses as well as walking and cycling. 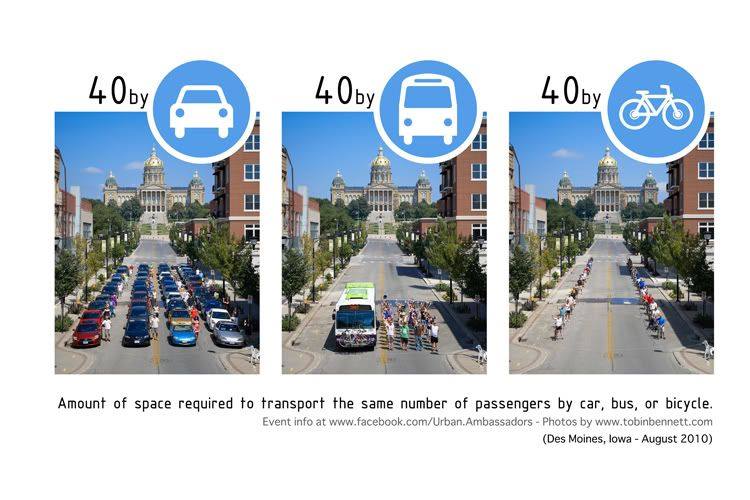 SPACE for Gosforth does not comment as a group on the Council’s plans so if you want to provide feedback, you must log on to the Commonplace website and share your view. Don’t forget to set the bar at the top saying whether you feel positively or negatively about the scheme. If you do not do this then your views will not be taken into account in the further development of this scheme.

The deadline for comments is 21 August.

More information on the proposals and dates and locations for public drop-in events are available on the Council website.