The Blue House and Jesmond Dene Road Working group met on Monday 12th December.  The notes from the meeting have been uploaded to the working group’s website.

As with all our meetings, there has been 100% attendance from all of the groups invited, which highlights the importance and acceptance of the process that Newcastle City Council has adopted.  Not forgetting that everyone is also volunteering their time and clearly cares about the outcome.

At our sixth meeting we covered the following:

Most importantly there is the opportunity for you to contribute to the Working Group with your thoughts and ideas which we’ll cover at the end of this blog.

Please read the notes provided by the Council for a full account of meeting there was considerable discussion on vehicle movements and the impact of the various junctions on traffic, however in this post we’ll focus on topics of particular interest to SPACE.

The questions surrounding communications and the website focussed on how best to activate engagement  with the wider community beyond the groups attending the meetings.  Digital Civics Open Lab have been maintaining the website and providing graphical illustrations and photography of the meetings.  A question was raised on how this is being funded since Digital Civics have dedicated considerable effort.  Open Lab confirmed that they are a research body and costs are covered as part of their research funding. Clara Crivellaro explained: “This is part of a larger agenda within digital civics, looking into the potential role of digital technologies and design to support meaningful public discussions and processes of public consultations around the future of the places that matter to us in the city.” 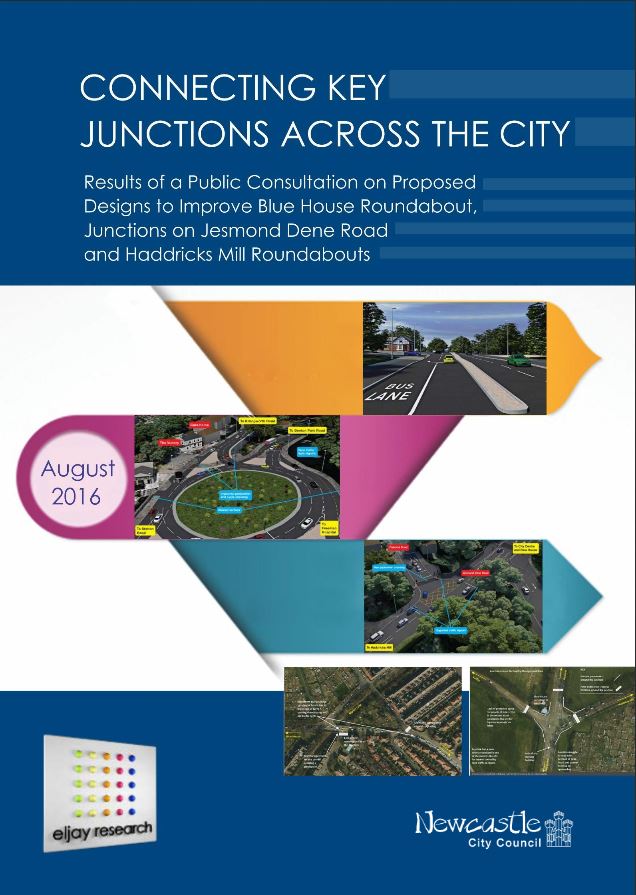 The original plan for Blue House created considerable public engagement against the plan, the challenge for everyone is to harness the same degree of engagement for people to inform the Working Group and the Council on what they do want to see.

The Working Group was once again broken up into smaller groups to discuss the proposals for Jesmond Dene Road as provided by the Council (note this is a large file). 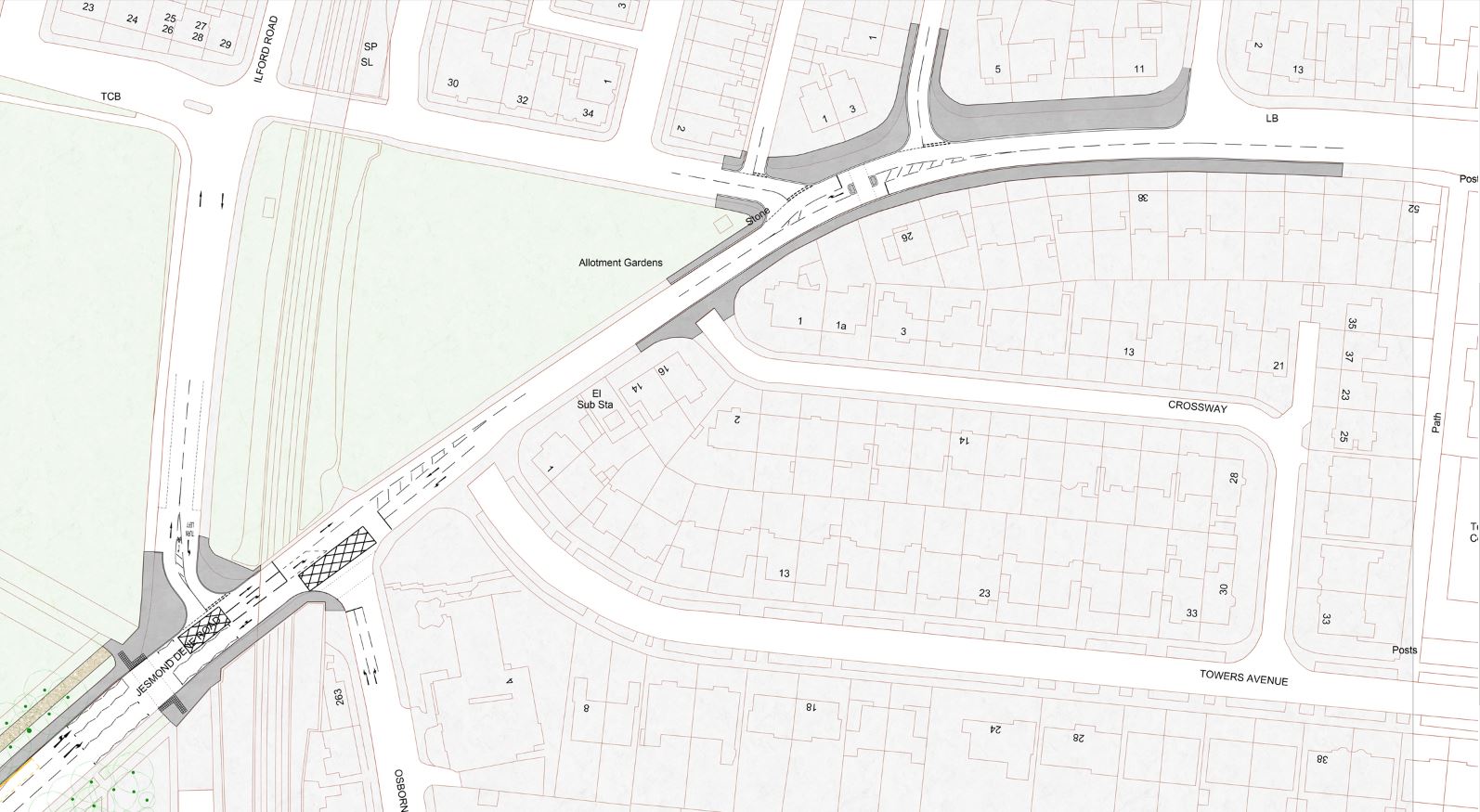 Following on from our last meeting on this topic, SPACE is disappointed that changes had not been made to the previous proposed plan to address the issues we highlighted at the last meeting:

SPACE reiterated the above points and other members in the Working Group raised the potential for placing a 2 way cycle bridge across Metro line adjacent to the current road bridge.

This would ensure a continuous route travelling east – west, but does however raise a number of other challenges:

The revised plan did incorporate a pedestrian crossing point between Moorfield and Beatty Avenue.

A toucan crossing was also proposed by the council to link  ‘the cut’ (aka ‘Friday Fields Cut’) running alongside La Sagesse at the top of Matthew Bank. 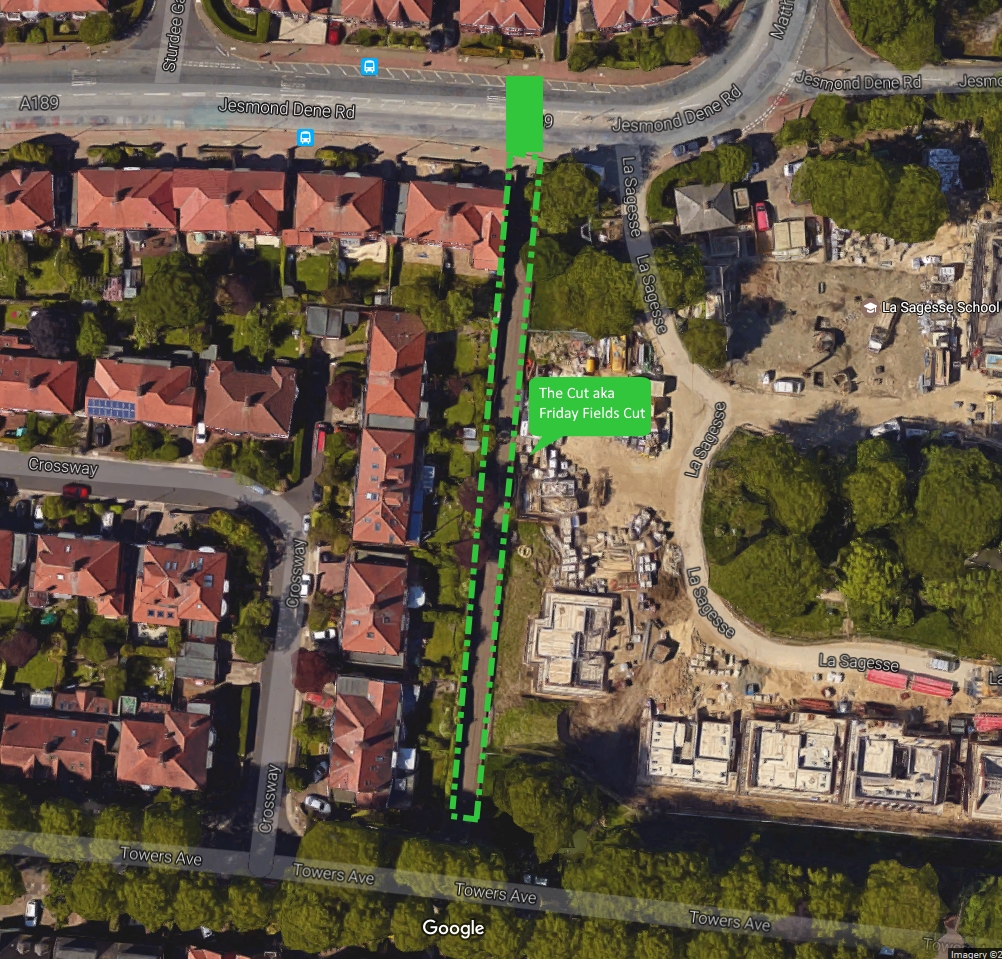 This is a frequent crossing point for residents living in 5 Admirals estate to access Jesmond and its shops and facilities.

Data was provided analysing the junction performance (in terms of volume and queue lengths) for vehicles approaching the junctions for the three junctions previously assessed in the meetings.  Both John Dales and Graham Grant commented that they need to do further work on the information that was being presented in the statistics and forecasting since there appeared to be discrepancies.

It was interesting to note that the new designs did not improve on the current traffic situation.  However, the designs have to be considered in relation to the current safety record which the council has a duty to address.

From SPACE for Gosforth’s perspective none of the junctions under study address the fundamental issues of pollution.  The data under study reflects the current volumes of traffic, and we already know that this is producing unacceptable levels of pollution since it is part of the Air Quality Management Area since 2011.  During the discussion the meeting raised the issue of the goal of less traffic together with better traffic flow to reduce pollution.

John Dales summarised the areas of emerging consensus in the working group – the new junction should be at the current location, there should be little or no tree loss, better walking and cycling facilities are essential, and, there is an acceptance that the Blue House itself may be required in terms of space.

We should add that no final design has yet been agreed at the Working Group.

Graham Grant is preparing a paper to discuss the overall options with the Freemen of the Town Moor in January 2017.  John Dales will prepare a paper summarising the outcomes from the last six meetings.  In addition, both will look in more detail at the traffic modelling data and make revisions to the plans in preparation for the next meeting. 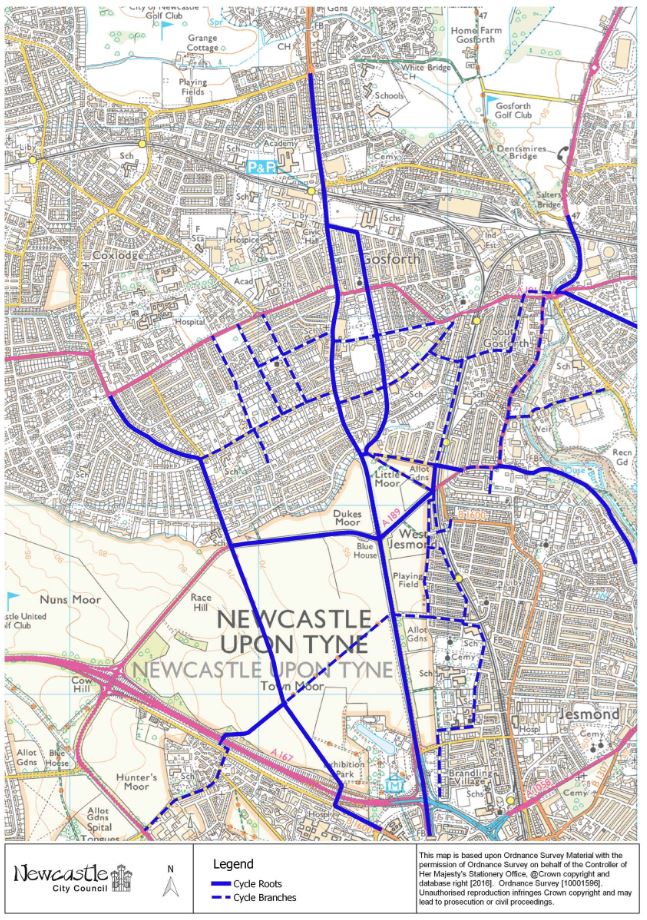 The council said that the Cycling Strategy would be refreshed in 2017 and to this end issued the Working Group with a map of proposed cycling routes which interconnect with the Strategic Cycle Routes.

A comment from the meeting was that it is important to understand people’s journeys before devising routes.

These routes are purely suggestions at this stage, and the Working Group was asked to consider this map and bring any suggestions to the next meeting.

In addition, the Working Group was issued with blank maps of the area surrounding the Blue House junction and asked to consult with their members on areas where ‘rat running’ was taking place or where it was likely to increase as a result of changes.  Finally, the Working Group was asked to consult with its members to generate ideas on how to address the issue of forecasted vehicle movements in 2031, and what the council might do to change people’s travel habits in order to ensure that the predicted demand does not emerge.

SPACE will follow up on this ‘homework’ but in the meantime we would welcome your thoughts on the topics of ‘rat running’ streets and any ideas you may have to address behaviour change.

The date of the next meeting is likely to be end of January 2017.