The Blue House and Jesmond Dene Road Working group met on Monday 28th November.  The notes from the meeting have been uploaded to the working group’s website.

This was our fifth meeting so here’s a quick recap of what we’ve covered already (not in any particular order or priority).

From an education and understanding perspective, we’ve learnt about:

At our fifth meeting the proposed speed limit changes for the whole stretch of Great North Road (which will be taken to public consultation shortly but are a mixture of 40mph on open spaces reducing to 20mph in built up areas) were covered, and the traffic modelling data for the previous designs was explained and reviewed.  The challenge with traffic modelling data is that it’s only modelling around the junction and therefore works in isolation.  Graham Grant, Head of Transport Investment confirmed that the council engineers do model for the network and that this exercise would be undertaken when the Working Group had finalised its preferred alternative plan.  However, as the three plans had already been largely rejected for a variety of reasons the presentation of this modelling data was more an educational exercise.

John Dales presented a new design which extended the concept of the ‘turbo’ roundabout, discussed at a previous meeting.

Turbo roundabouts were first introduced in Holland in 2000, and there are now 300 in operation across the country.  The Dutch Institute of Road Safety Research (SWOV) describes a turbo roundabout as:

This roundabout has non-concentric markings, which makes it possible to exit a two-lane roundabout without the risk of lateral conflicts i.e. situations in which vehicle sides can touch one another. In essence, a turbo-roundabout has the following features:–

The first turbo roundabout in the UK was implemented in Bedford in 2014.  It was disliked by cycling campaigners as there was no separated space.  However at Blue House, cycle lanes can be accomodated away from the main carraigeway. 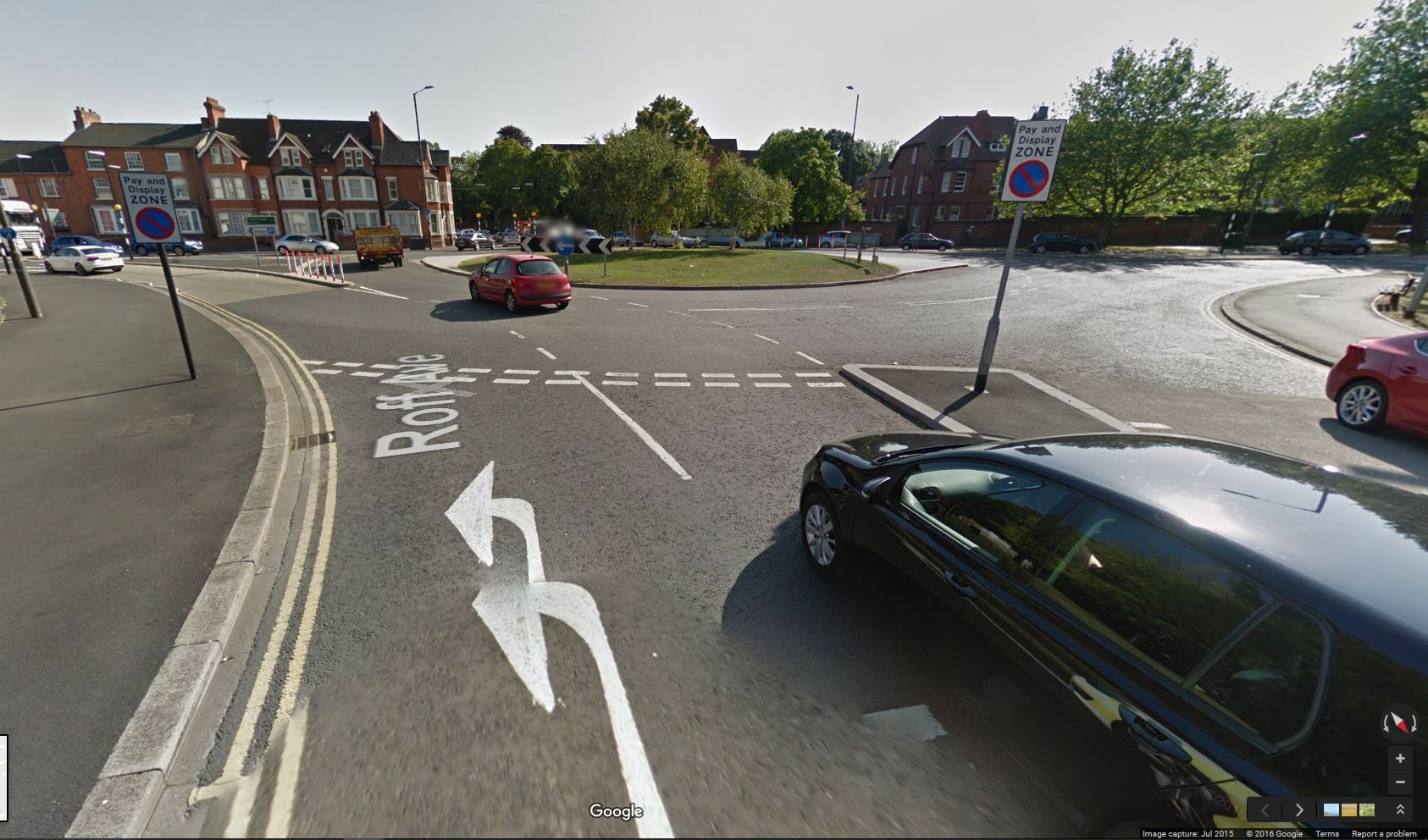 The new design extends the turbo design from a previous plan and intrudes into the Moor space by using space currently occupied by the Blue House itself.

The Blue House is not registered as a Building of Special Architectural or Historic Interest, however it does appear as a local listed building in Newcastle City Council’s Supplementary Planning Document (“the SPD”) for the Newcastle upon Tyne Local List adopted on 21 September 2006.  “The SPD encourages the retention and conservation of the City’s local heritage assets.”

The Working Group was again split up into smaller groups to comment on the following alternative design: 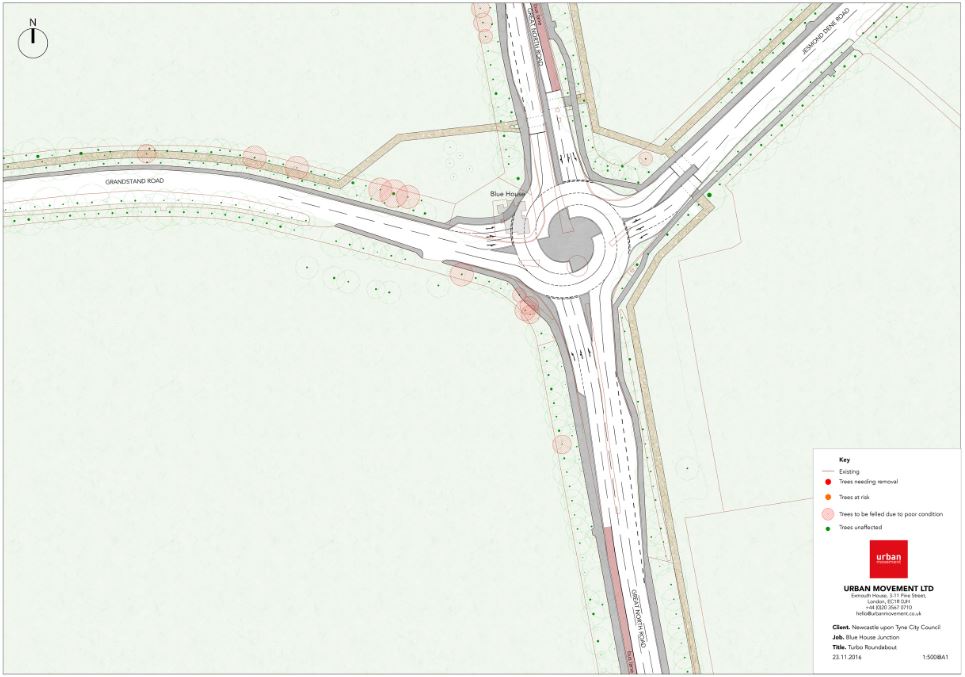 This design maintains the current volume of vehicle lanes but through the use of a staggered roundabout introduces greater lane discipline and reduces vehicle speed.  The red circles are trees that are unhealthy, end of life, or dangerous and have been identified by research undertaken by arboriculturalists.  The light brown lines that run parallel to the roads are footpath/cycle track.  The traffic modelling data for this roundabout will be provided at the next meeting.

SPACE raised the following of points on this design:

It should be borne in mind that this plan is another proposed plan and the Working Group is free to make modifications. Any proposed design will likely go through several iterations of refinement.

For the first time, the Working Group considered Jesmond Dene Road heading towards Haddricks Mill.  The junction at the top of Osborne Road has restricted space due to the width of the Metro bridge. 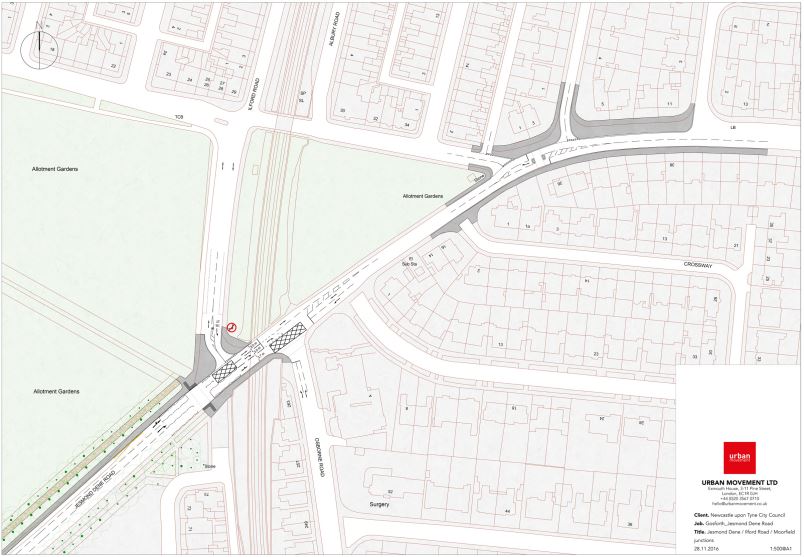 SPACE made the following observations on this design:

The next meeting will take place on Monday 12th December 2016.