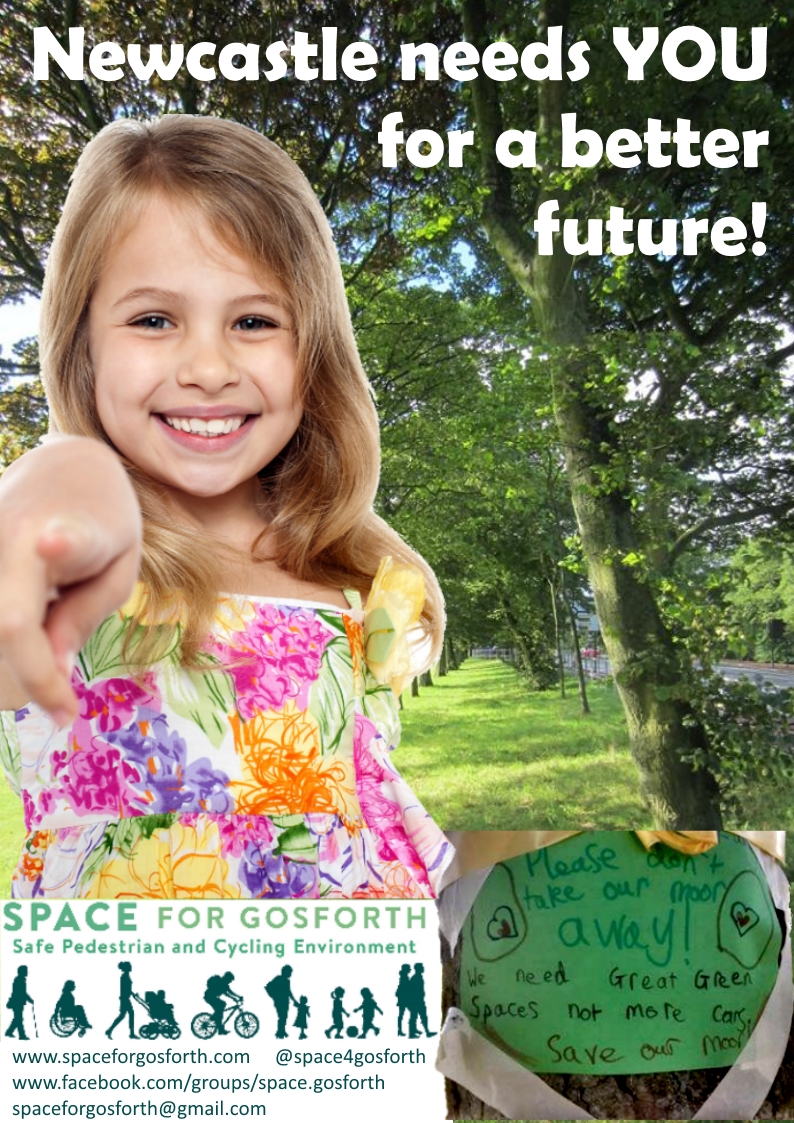 At the SPACE for Gosforth public meeting in Trinity Church we outlined how the size of the Blue House roundabout was due to a predicted increase in vehicle traffic; and how an alternative that prioritises helping people get about on foot, by cycle and public transport could be a viable alternative that meets Newcastle City Council’s objectives and saves the Town Moor.

This post is our feedback to the Blue House to Haddricks Mill scheme. You can comment on these proposals up to Sunday 21 August on the Council’s Commonplace website.

This is the feedback from SPACE for Gosforth on the Blue House to Haddricks Mill proposals. SPACE for Gosforth is a group to promote and campaign for a Safe Pedestrian and Cycling Environment for Gosforth.  We are residents of Gosforth, most of us with families and we walk, cycle, use public transport and drive.  We are not affiliated to any other campaign group or political party.  We want to see Gosforth as a destination for visitors rather than purely a transport corridor.  We want to see changes to Gosforth’s road infrastructure that prioritise people walking and cycling of all ages and abilities over vehicles.

Under normal circumstances SPACE for Gosforth would not comment as a group on these proposals, however due to the exceptional nature of the plans proposed and their negative impact upon the City of Newcastle, particularly with regard to public health, we felt that it was important to do so.

As a group we recognise and support the need for people to get about, and we are pleased that Newcastle City Council has objectives to reduce congestion, improve safety and to reduce air pollution and its impact on public health. We see that there are positives in the schemes proposed, especially the bus and cycle lanes on Killingworth Road and the new pedestrian crossing at the end of Osborne Road.

However, there are also a great number of negatives as well and our considered view is that under the current proposals, none of these three objectives are likely to be met; and that this scheme, as it stands, represents poor value for money.

We would like to propose amendments both to the schemes and the underlying assumptions made by Newcastle City Council.  We believe these would result not only in this scheme being value for money; but would also lead to a significant return on the Council’s investment.

The most significant feature of the Blue House proposal is the size of the roundabout.  This we understand is as a result of the Council’s modelling assumptions relating to the level of demand for travel, what those journeys will be and how they will be made. We would like to challenge all three of these assumptions.

25 years of research shows that a junction designed with significant additional capacity will cause additional traffic due to induced demand, and this extra traffic will negate any time savings or improvements in air quality that may be forecast.

This additional traffic will be nothing to do with any increased economic activity or the new homes currently being built in Newcastle’s green-belt. While economic activity may lead to some additional journeys being taken, there is little evidence that increasing capacity for travel increases economic activity. It is more likely that more journeys (and therefore more cost) will be made at the same level of activity. This would represent a loss of productivity for the region.

People’s decisions as to where they live and travel to will be influenced by the additional capacity being provided. This scheme will therefore encourage more people to live outside Newcastle, potentially weakening local neighbourhoods, and to make longer journeys – undoing any benefit of time savings predicted for this junction. This contradicts Newcastle City Council’s own strategy for stronger, healthier neighbourhoods.

The assumption of how we travel is most important though. Walking, cycling and public transport are extremely space-efficient means of travel and with a different mix of transport modes, the same or greater numbers of people could travel through these junctions but in a fraction of the space required by the proposed roundabout, and at a fraction of the cost. We are glad to see so many of the comments on Commonplace support making improvements for these modes. Improving conditions for walking, cycling and public transport will also induce demand, but in a way that benefits the whole community.

Blue House – Issues with the design

We would like to see a junction designed to fulfil the following objectives:

The additional capacity created in this way will ensure the maximum throughput of people possible in the space that is available.  The following graphic illustrates our suggested improvements. 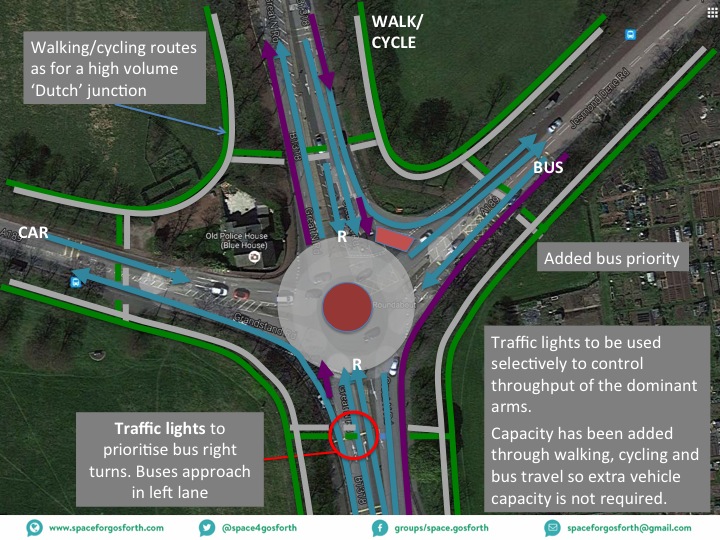 We would like to see improvements for Jesmond Dene Road to be designed to fulfil the following objectives:

Although not included in the current proposals this forms part of the Northern Access Corridor route and we would like to suggest a number of improvements that we would like the Council to consider alongside our other feedback:

We would like to see a junction designed to fulfil the following objectives: 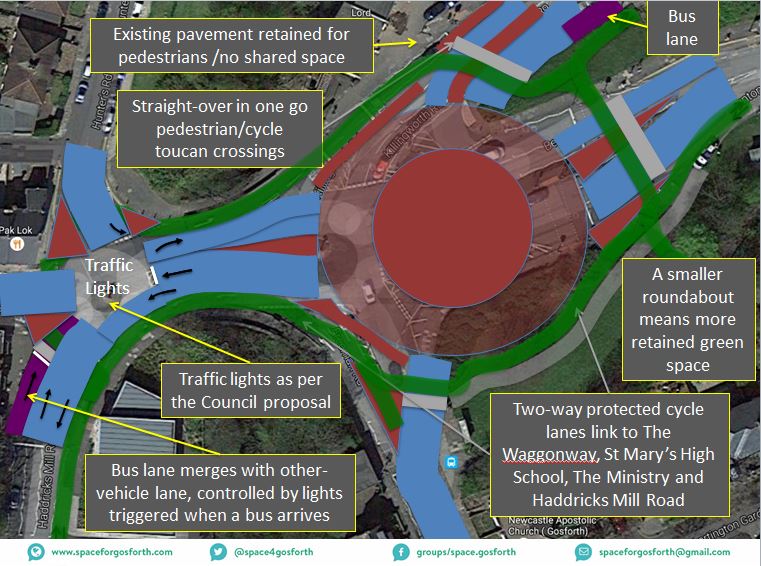 We would like to see alterations to Station Road designed to fulfil the following objectives: 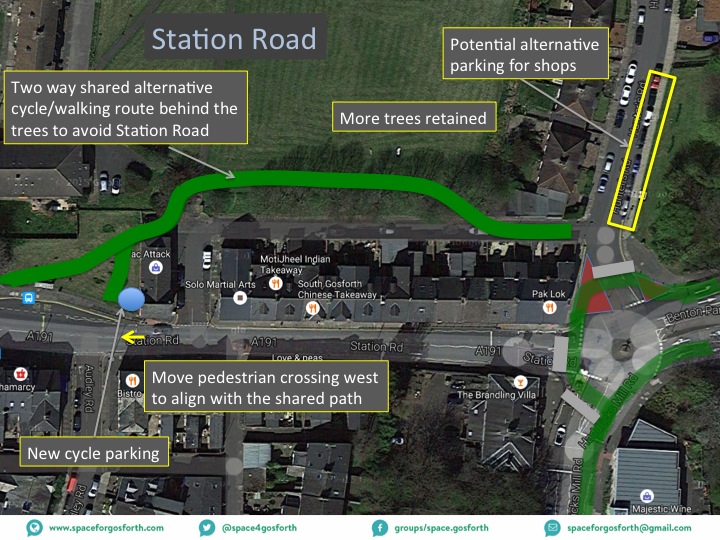 We support the changes being made here to include a bus lanes and cycle path as well as to widen the pavement.

In summary, while we note that there are many negatives to the currently proposed schemes, with the improvements listed above alternative schemes may be presented that meet Newcastle City Councils’s objectives of increasing people-moving capacity, improving safety for all users and reducing air pollution by encouraging more people to walk, cycle or use the bus.  Our alternative scheme would also avoid the need for banning movements, in particular for the number 33/33A bus route, and the loss of green space on the iconic Town Moor.