Even at 20mph 17% of adults are killed or seriously injured when hit by a car. For children or older residents the figures will be worse. Why then do so many ignore the 20mph speed limits in place throughout Gosforth’s back streets? Walking to school should not be an extreme sport.

This is the story of three of Gosforth’s back streets. One has a low volume of traffic mostly driving within the speed limit, somewhere we all might like to live and where children might reasonably be left to play outside.  The other two suffer large volumes of traffic, a very large proportion of which is travelling faster than the speed limit.

We’ve called these streets Street A, Street B and Street C, because we want to highlight the issues rather than the specific locations. Other streets in Gosforth are similarly affected.

Street A – A quiet Street in East Gosforth.

The graph below depicts traffic flows on Street A – a wide, lightly parked street in East Gosforth. The height of the bars shows the number of vehicles that passed in any given hour, while the colour shows the speed. Green denotes below the speed limit, with brown or red representing vehicles travelling greater than 20mph.

Street A is not blocked, nor does it have any restrictions on speed or access or any traffic calming. In many ways Street A is lucky, for now, that most of the people who use it are those that live there or are visiting. And people who live there, or who walk or cycle along that street, we hope would feel safe. 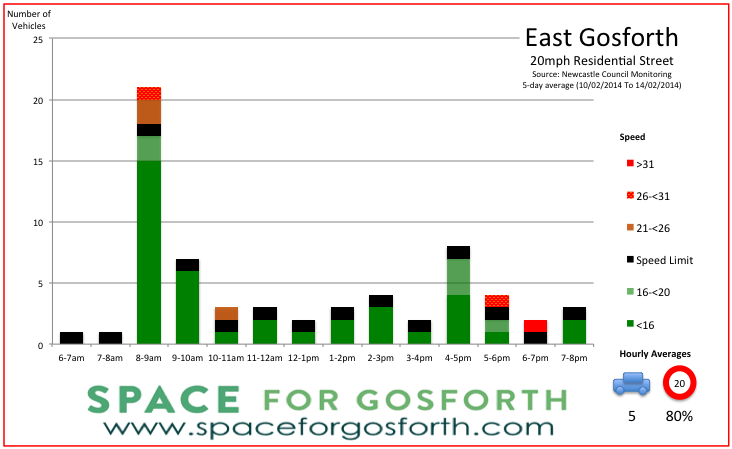 As shown on the bottom right of the graph, the average number of vehicles per hour between 6am and 8pm was 5 of which 80% were travelling at or below the speed limit. Many back streets in Gosforth are like Street A, but quite a few are not.

Street B – A leafy residential street in West Gosforth.

Lots of parents and groups of children walk along this street on their way to school or to after-school activities. It is also marked on the Newcastle Cycle Route Map as being suitable for cycling – although if you read the small print on the map it clarifies that this street could have varying amounts and speeds of traffic.

Street B can be used in both directions without limitation, but parking on both sides of the street means there is only one lane that has to be shared by all vehicles. This, no doubt, acts as a form of traffic calming but also means drivers might not see a child waiting to cross the road.

This street is within the 20mph zone west of the High Street – something local residents and Councillors supported in order to make their streets safer. When Newcastle City Council put a traffic counter on this street late in 2015 it found that on average 1,167 vehicles each weekday (42% of all traffic) were travelling faster than the speed limit. 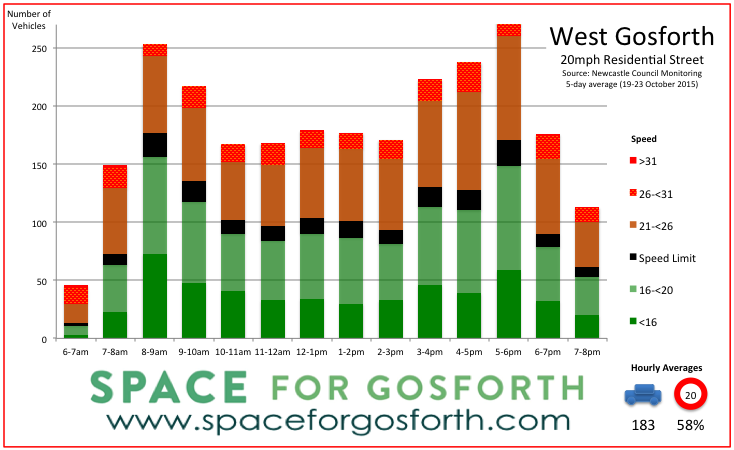 For Streets B and C we had to change the scale because there were so many more vehicles than on Street A. More than 150 vehicles use Street B every hour between 8am and 7pm, with peaks in the morning and evening where numbers exceed 250 vehicles per hour. 250 per hour equates to one vehicle every 14 seconds. Between 6am in the morning and 8pm at night the average number of vehicles per hour is 183. That’s one vehicle every 20 seconds – all day. If you are going to cross this street you need to be pretty careful.

In addition to traffic volumes the counters also estimate vehicle types. Most of the traffic was cars. Also recorded each day were 342 Light Goods Vehicles (LGVs), 47 Heavy Goods Vehicles (HGVs) and 9 buses. In total 2,723 vehicles use this street every weekday. It is clear that this street is used by a lot of through traffic as well as by those that live there or who are visiting.

Street B is Linden Road.

Street C isn’t quite as busy as Street B (2,074 vs 2,773 vehicles on an average weekday) but has far more speeding vehicles. On average 1,765 vehicles (85% of all traffic) exceed the speed limit on Street C every weekday. 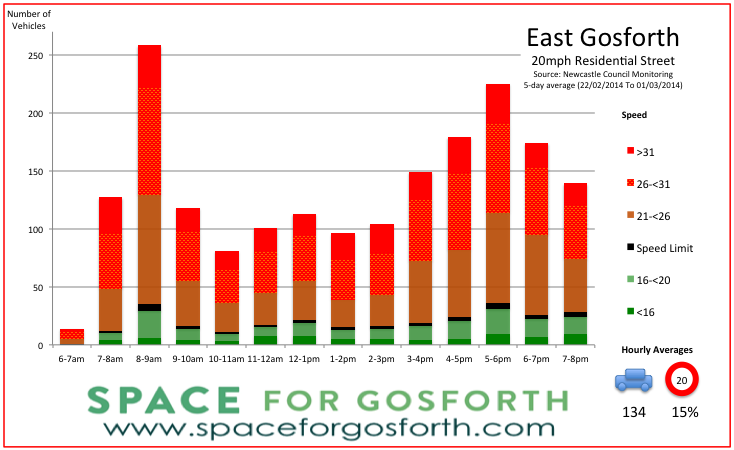 Street C is back in East Gosforth, not far from Street A. It is not an especially wide street but for most of its length it has two traffic lanes so cars travelling in opposite directions can pass easily. Like Street B it is also used by parents and children walking to school as well as people walking to and from the Metro.

Of the 2,074 vehicles recorded on average 194 were Light Goods Vehicles (LGVs), 15 were Heavy Goods Vehicles (HGVs) and 8 were buses. Clearly this street is also being used by through traffic.

We all know excessive speed can kill, but large volumes of traffic also increase the likelihood that someone, or some child, will be killed or injured.

Excessive traffic also leads to pollution and noise, and reduces the quality of life for those who live on these streets. All the same issues that Gosforth High Street suffers from.

SPACE for Gosforth wants safer streets for Gosforth.  Streets more like Street A where children can play out and where people of any age can walk or cycle without fear of the traffic. Other streets in Gosforth have been transformed. With the right support, the same could happen for Streets B and C.

SPACE for Gosforth will be leafleting the residents of these two streets. If you have received one of our leaflets, please tell us what you think.

We thank Newcastle City Council for providing the traffic count data for these streets.