2018 is an important anniversary for Newcastle upon Tyne as it marks 10 years since Air Quality Management Areas (AQMAs) were declared for the city centre (which includes parts of Jesmond and Heaton) and for South Gosforth in 2008.  The city centre AQMA replaced an earlier AQMA in this area. 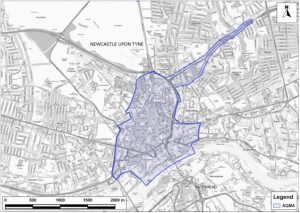 Both Air Quality Management Areas were declared due to levels of the pollutant nitrogen dioxide exceeding legal limits.

Nitrogen dioxide has been linked to a wide range of diseases and other health conditions including cancer, low sperm counts, dementia and cognitive delay in children. 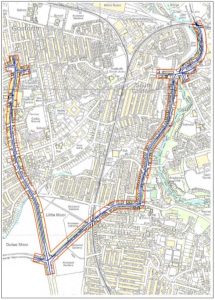 Members of the public can obtain real time information about levels from pollution from Newcastle University’s Urban Observatory. SPACE for Gosforth has written several previous blogs highlighting high levels of nitrogen dioxide in both AQMAs:

As well as nitrogen dioxide pollution, previous monitoring carried out by SPACE for Gosforth in 2015 suggested that there might also be a problem with particulate pollution on Gosforth High Street.

2018 will also be an important electoral date for the city of Newcastle upon Tyne as residents in all wards will have the opportunity to elect all their three councillors due to the boundary changes. 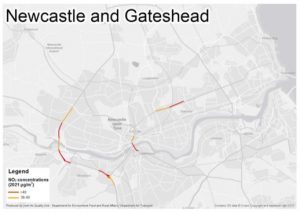 Locations where Defra have ordered a reduction in emissions

At SPACE for Gosforth we believe that this election offers residents of Newcastle upon Tyne the opportunity to raise the issue of our filthy air with candidates of all parties and to ask how they would tackle this issue.

Poor air quality affects everyone who lives and works in Newcastle upon Tyne. It is not an issue that our elected representatives can ignore, as they have been ordered to take action by Defra to reduce air pollution on the key city arteries of the Tyne Bridge / Central Motorway, the A1 and the Coast Road. This was following the defeat of the Department for Environment, Food and Rural Affairs (Defra) in the High Court by the environmental law firm Client Earth. 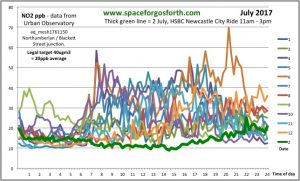 Nitrogen dioxide levels on Blackett St last July – only legal when the road was closed to traffic!

Client Earth has launched further legal action against Defra this year, so it is entirely possible that as one consequence of this action Newcastle City Council may be required by the Government to do even more.  It is also worth noting that Newcastle City Council is currently controlled by the Labour Party, and Jeremy Corbyn, the leader of the Labour Party, has recently publicly stated that tackling air pollution is a national priority for his party should they form a government.

The seriousness of this issue, both in its impact on public health and due to the legal obligations that are falling on Newcastle City Council, means that it is one which every candidate for public office in our city needs to understand fully.

In 2018 we hope to hear more from both elected councillors and candidates about what they will be doing this year to ensure that councillors, council officers and others in Newcastle take decisive and effective action to reduce levels of nitrogen dioxide in our city.

Ten years is too long for the health of the public to be put at risk in this way – our ambition for 2018 is that this tenth birthday for both AQMAs is also their last.