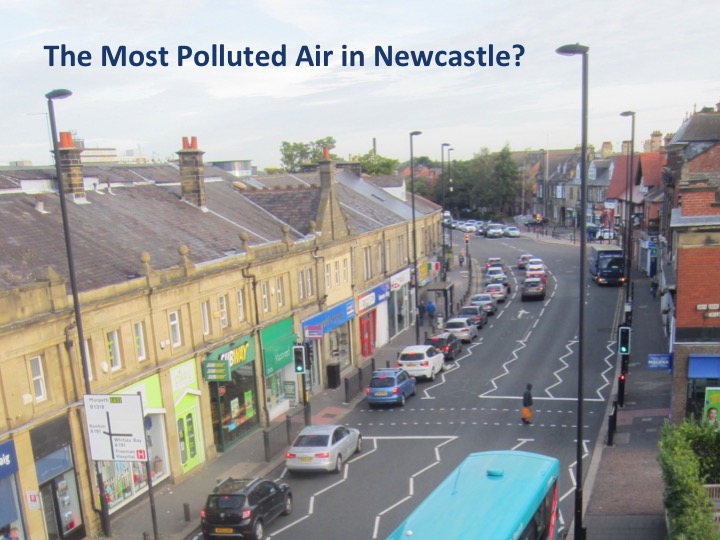 The Council has just released its Air Quality Annual Status Report 2018 and it is not looking good for Gosforth High Street. We had expected that the 2016 reading of 51μg/m3  for Nitrogen Dioxide (NO2) was a one-off due to the roadworks at the junction with Salters Road, but in 2017 the figure had increased again to 59μg/m3. Both are substantially higher than the legal maximum of 40μg/m3.

In 2017 Gosforth High Street actually had the worst recorded air pollution of anywhere in the city.

The most polluted locations in Newcastle in 2017

*All monitors are located next to busy roads.

Elsewhere in the Gosforth Air Quality Management Area (AQMA) readings have improved slightly since 2016, although the reading at the south end of the High Street shops is also still above the legal limit.

At Haddricks Mill / Station Road air quality is only just within the legal limit despite Killingworth Road being fully closed to traffic for the second half of the year (in 2016 the readings were 42 and 46).  This might form part of the explanation why the reading on Gosforth High Street has increased in 2017. 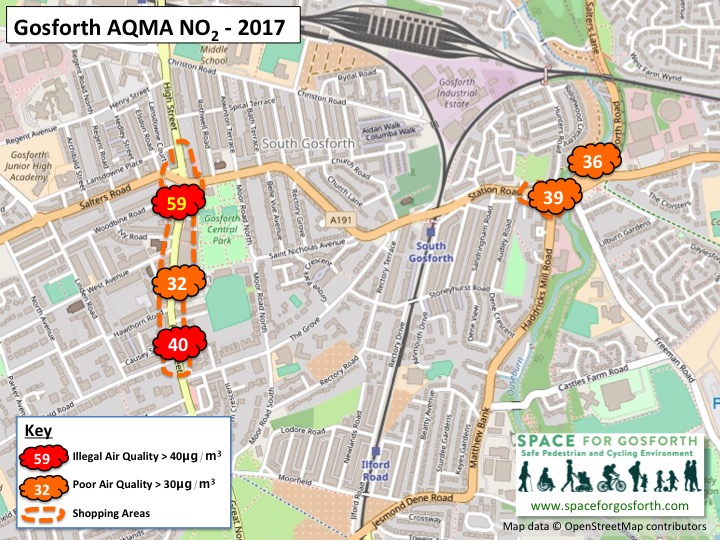 Gosforth also has an automatic monitor (shown below) located in the Salters Road car park. Over 2017 and into 2018, this monitor has been recording much lower (and legal) air quality results. We reported in our 2016 Air Quality Update that, based on this monitor, we thought that air quality on the High Street was improving. 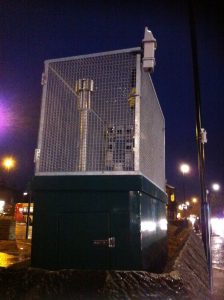 The difference in the two results is likely to be explained by the fact that the automatic monitor is located in an open space where pollution can disperse, whereas the official monitor is located in the main part of the High Street with buildings on either side forming a “street canyon”.

Street canyons can dramatically affect pollution levels. If the wind typically flows along the street then this can actually flush out the pollutants and cause them to disperse more quickly. Where the wind flows across the street this can trap the pollution within the canyon and prevent dispersal.

According to the government, the most effective way to improve air quality is to introduce a Clean Air Zone. The Council is working on a plan to meet the UK High Court’s directive to reduce concentrations of NO2  to meet legal limits and to do so within the shortest possible time. These results make it much more likely that Gosforth High Street will need to have its own Clean Air Zone. For more on Clean Air Zones see our blog The New Newcastle Air Pollution Plan. Details of this plan should be published early in 2019.

Air quality across Newcastle city centre also remains poor. At Percy Street and by Swan House roundabout, where the highest figures have been recorded, the results are no better than in 2016. In fact the only location with a noticeable improvement is outside Central Station, although even there readings are still above the legal limit.

In our 2016 Air Quality Update we said “The approaches used to date have been shown to be too slow or ineffective. To achieve compliance in the shortest possible timescales real commitments are required to effect a step change so that the city can be rid of dangerous air quality levels it has suffered for too long.” It is clear that this is still the case. We hope we will not have to repeat this sentiment again when 2018 figures become available this time next year.

While initiatives such as the Haymarket Moss Tree might be a useful talking points, it is not an alternative to substantive action.

Of all the measures listed in the current report, one of the most effective (as described by the report) is car parking charges. In Newcastle the Council continue to subsidise free parking after 5pm, money which they could be using to improve non-polluting travel options. For most of us, being “Alive after 65” is more important than saving a few pennies on parking fees.

Three hundred and sixty lives are cut short every year in Newcastle due to poor air quality. Air pollution is also a known cause of a range of other health issues including asthma, lung disease, heart disease, cancer, dementia and infertility. If you live or work near a polluted location and have breathing or other health issues that could be linked to pollution, you may wish to mention this to your doctor next time you visit. 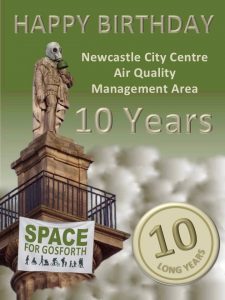 April 2018 was the 10th anniversary of the city centre and Gosforth AQMAs. The Council have had ten years to fix this problem, but the latest reading for Gosforth High Street is worse than ever.

In 2015 the UK Supreme Court directed the government to ensure that air quality meets legal limits, and to do so within the shortest possible time scales.

That was over three years ago. The Council must act now to protect the health of residents or be held in contempt of court.