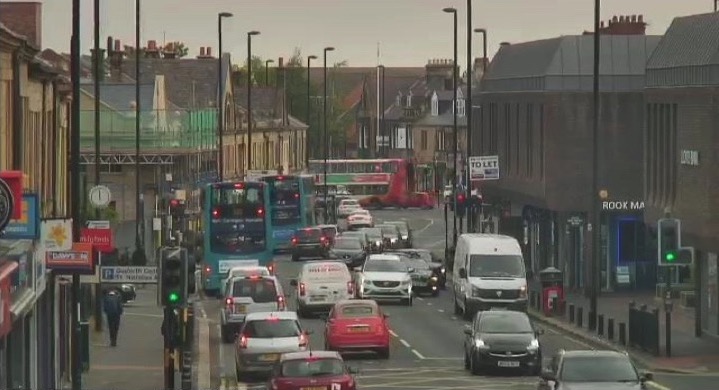 Air quality in Newcastle and Gosforth remains poor and, despite a 2018 court order requiring government to ensure legal limits are met as soon as possible, the Government has still not confirmed that Newcastle can implement its Air Pollution Plan to rid Newcastle of illegal air pollution. Since 2010, when current regulations took effect, thousands of people have died and many more made ill because of the failure to address air pollution in Newcastle.

This blog summarises the official NO2 air pollution measurements for the calendar year 2019, which were published in October 2020.

Nitrogen Dioxide (NO2) air pollution is easy to miss. It’s invisible and odourless but kills 360 people a year in Newcastle, Gateshead and North Tyneside and makes many more ill from asthma and other heart and lung conditions. Health effects are worse in the young and old, with people who drive for a living including bus and taxi drivers most likely to be at risk from higher exposure. In July, the Guardian reported that “there is also “compelling” evidence that air pollution significantly increases coronavirus infections, hospital admissions and deaths.”

Air pollution on Gosforth High Street remains over the annual legal limit of 40μg/m3 with the worst reading, as in previous years, at the end of Woodbine Road by Jan Forster estate agent.

On that basis we wouldn’t expect any substantial reduction in traffic once Killingworth Road opened again to two-way traffic at the end of July 2019.

Many people have argued, incorrectly, that main-road vehicle traffic should be allowed to use local bridges, which are all on minor roads, to “relieve congestion” and “reduce pollution” on main roads. If that worked then we should have seen a reduction in traffic on Gosforth High Street and improved air quality after July 2019 when Killingworth Road re-opened, but vehicle volumes after July were little different from 2018 and pollution levels were no better. 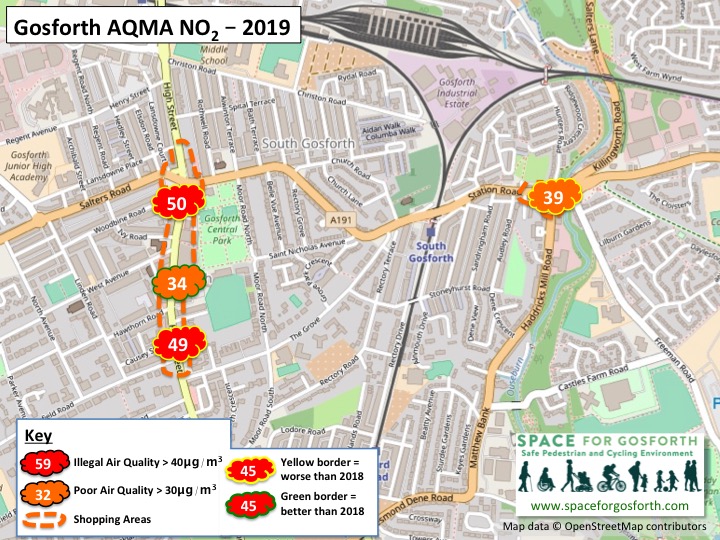 The 2019 measurements were all taken before the impact of Covid-19, and before changes were introduced to Gosforth High Street to support social distancing in August 2020. We have also looked at air quality in September 2020 compared to the previous two Septembers using Urban Observatory monitors to see if predictions (and claimed observations) of heightened levels of pollution due to the new changes were justified. Based on these measurements, air quality in September 2020 was generally better than in previous years, so it is not true to say pollution is worse than before. 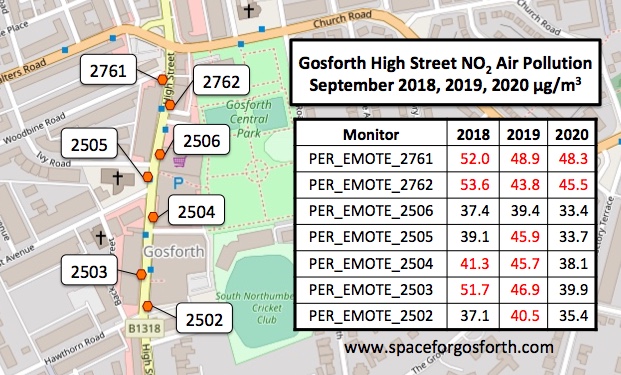 Inevitably, unless the Council takes action to constrain traffic growth and emissions, traffic levels will increase again and the lower levels of pollution we experienced over the summer of 2020 will be short-lived.

In our blog Air Quality – What Works? we summarised the measures that have been shown to be effective in reducing air pollution. We used these to create a set of proposals for Gosforth as part of our response to the Newcastle City Council air quality proposal. All but two of these proposals could have been implemented prior to February 2020 so would not have been impacted by delays due to Covid-19.

In Newcastle city centre, the Orchard Street taxi rank next to Central Station, had the worst pollution reading in 2018 of 95.6μg/m3. In 2019, this location was not monitored but a nearby monitor on Neville Street recorded 69μg/m3, the second worst reading in the city centre after Old Eldon Square on Blackett Street. In July it was reported that “Orchard Street tunnel would be pedestrianised under the station redesign plans.” 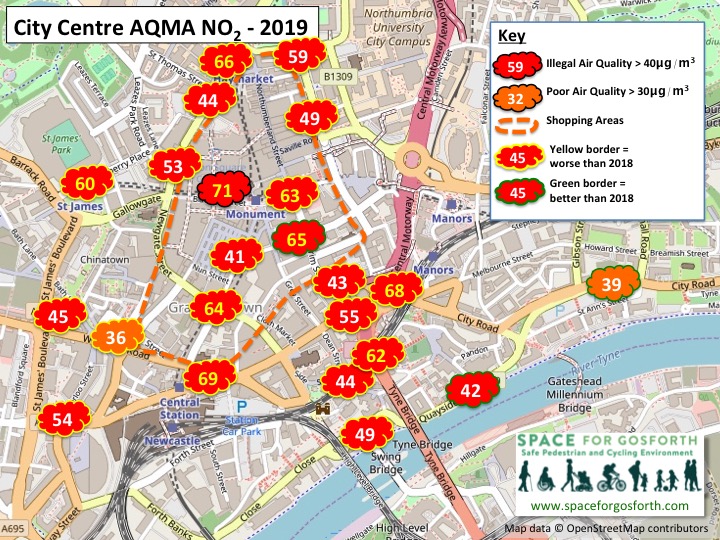 In January 2020, the Council also consulted on changes to pedestrianise Blackett Street, which would lead to much improved air quality at this busy city centre location. You can see the SPACE for Gosforth response to this consultation here. This in itself would not address wider air quality issues in the city centre though.

The plan that should address those wider issues was to create a city centre Charging Clean Air Zone (CAZ) where drivers/operators of buses, taxis and HGVs that do not meet modern emissions standards would be required to pay a fee every day they enter the CAZ. CAZ have been described by the Government as one of the most effective ways of addressing air pollution. The proposed CAZ should help address poor air quality where buses and taxis are a high proportion of overall traffic levels as on Blackett Street and by the Central Station taxi rank.

The Council have recently confirmed that this plan will not be implemented in January 2021 as originally intended but will be delayed to later in the year. Given current restrictions due to Covid-19 and government funding for public transport totalling over £700m so far in 2020, it is likely that the Government will need to provide further subsidy for engine upgrades if bus companies are to invest in cleaner engines.

We know that Go North East are investing in lower emission Euro 6 diesel engines and are trialling electric buses, but haven’t yet seen any plans from Stagecoach or Arriva North East who operate routes through Gosforth High Street.

Tolls of up to £50 per day for some high-polluting to drive into Newcastle will NOT be introduced in Januaryhttps://t.co/kVO9zE1SPW

The Council have also confirmed that plans to address air pollution on the Central Motorway by reducing the number of general traffic lanes on The Tyne Bridge have also been delayed.

Air pollution at the south end of the Tyne Bridge was measured to be 42μg/m3 in 2019 by Gateshead Council.

As we said in our 2018 update, the Council’s pollution plan analysis predicted that air quality on The Coast Road would be compliant in 2021 and that no additional measures were required.

In 2019, no additional measures were implemented but rather than decreasing, pollution levels at the entrance to Jesmond Park West near People’s Theatre increased from 84μg/m3 to 93μg/m3, the worst recorded level of pollution in all of Newcastle and no doubt also the North East as a whole.

Newcastle and North Tyneside Councils need to urgently consider measures to address air pollution on The Coast Road as a CAZ by itself is unlikely to reduce air pollution levels from 93μg/m3 to 40μg/m3. 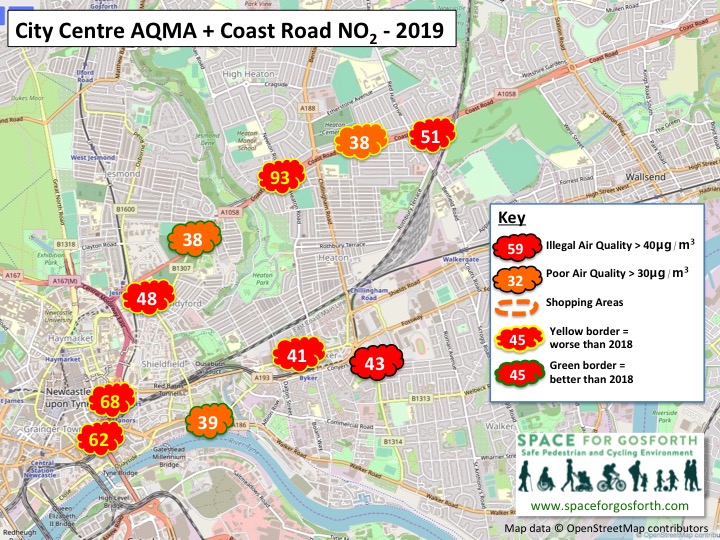 Air quality along The Coast Road and Byker

North Tyneside Council had not published its 2019 air pollution measurements at the time of writing.

For the first time in 2019, Newcastle recorded measurements of air pollution at Cowgate roundabout, Ponteland Road and on the West Road. Air pollution exceeded legal limits at all three locations.

Highways England have previously confirmed to us their belief that their £139m to £184m scheme to add an additional traffic lane between Scotswood and North Brunton would resolve known air quality issues on the A1 Western Bypass, although the scheme’s Notice of Determination suggests Highways England believe an environmental impact is not necessary.

It will most likely though lead to higher levels of traffic using both Ponteland Road and West Road which, unless other measures are adopted, could make pollution levels at both locations even worse. This could be made worse still on Ponteland Road if Newcastle City Council implements its plans to ‘upgrade’ junctions that will encourage even more traffic. 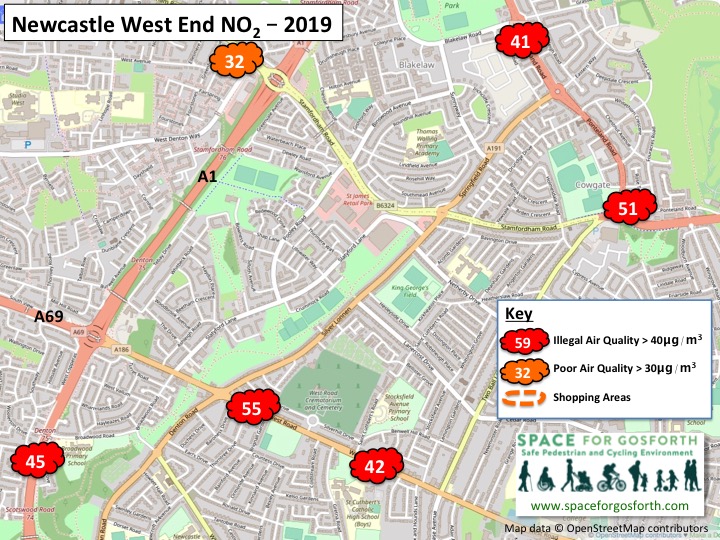 Air quality in the West End of Newcastle

These results, for the West End and the city as a whole create a number of challenges for Newcastle City Council.

Road traffic statistics for Newcastle and the North East can be found here. These show that total miles driven in 2019 was 1,209 million miles, an increase from 1,174.6 million miles in 2018. In 2008, when Newcastle’s Air Quality Management Areas were established, it was 1084.7 million miles. Research has shown that greenhouse gas emissions are correlated with vehicle miles driven so this increase also poses a challenge for Newcastle City Council’s net zero climate plan. The same research showed no correlation between green house gas emissions and congestion.

For anyone interested in details of how deaths from air pollution are estimated in the UK, the Winton Centre for Risk and Evidence Communication has produced a guide.

A frequently used figure comes from a Royal College of Physicians report that concluded “Each year in the UK, around 40,000 deaths are attributable to exposure to outdoor air pollution which plays a role in many of the major health challenges of our day. It has been linked to cancer, asthma, stroke and heart disease, diabetes, obesity, and changes linked to dementia. The health problems resulting from exposure to air pollution have a high cost to people who suffer from illness and premature death, to our health services and to business. In the UK, these costs add up to more than £20 billion every year.”

A more recent report by the Committee on the Medical Effects of Air Pollutants (COMEAP) gives a similar high figure saying “the range of estimates of the annual mortality burden of human-made air pollution in the UK is estimated as an effect equivalent to 28,000 to 36,000 deaths.”